Cetățile Ponorului is the name of what is to be considered “one of Romania’s natural wonders”.

The name of „Fortress of  Ponor/Cetățile Ponorului”, refers to what is to be considered the surface sector of a karst topography of three enormous potholes called doline.

The central basin (pothole) represents the closure of Văii Cetăților („The Strongholds’ Valley”) that looks like plunging into the bottom of a sack.

Cetăților valley ends at the bottom of a 100 m tall wall with a cave entrance of 70 m height. For this geological formation it is easy to surprise any tripper with its breathtaking grandeur.

It is unanimously considered the grandest karst topography/phenomenon from Romania.

Cetățile Ponorului represent the main attraction within Padiș area. It’s one of the most important cave in Romania.

The access into Padiș area can be achieved through:

Once you get to the Padiș area, follow the tourist route marked with a blue spot. The trek shoul last around 5 or 6 hours.

You can start your route from Glavoi glade.

The watercourse that formed this grand karst topography finds its origins in the waters gathered from the surroundings of Padiș area. Here, along the Trânghiești stream it is possible to notice how, after a few hundred meters, it disappears into a ponor after encountering in its course Triassic carbonate rocks.

After a underground route unexplored by cavers, but marked at the surface by numerous dolines, the stream reappers in Izbucul from Poiana Ponor – a very well known landmark of padis. Here, Triassic carbonate rocks and dolomites leave the place to Jurassic carbonates.

At the end of of the river from Poiana Ponor, the stream disappears again being swallowed by whirlpools and reappears under the portal of Cetățile Ponorului. 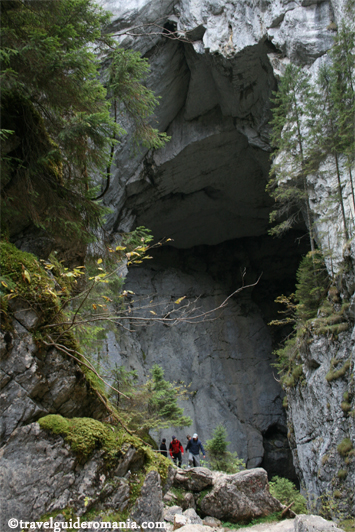 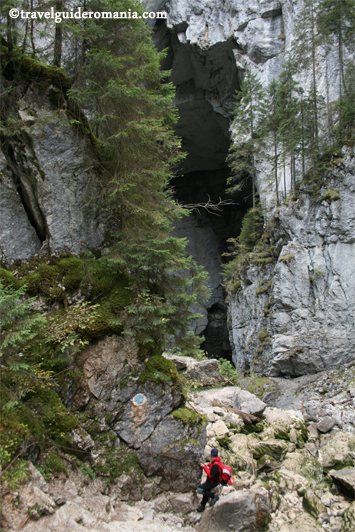 Once you get to the portal, which is in Dolina I, you have two options to continue:

At the base of the main portal, you also have the option to visit Dolina II. 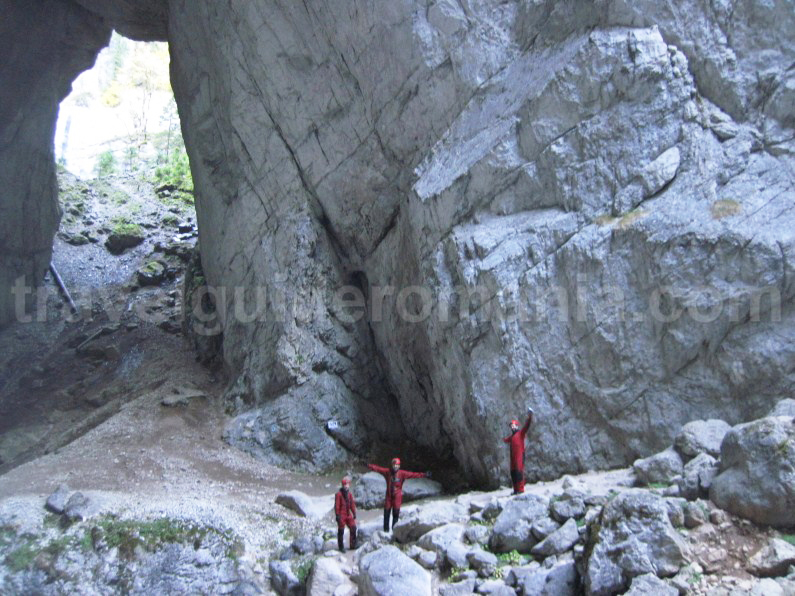 In this area (left side of the entrance of the cave) you may also observe the affluent which flows into Cetăți cave, coming from Caput cave.

It may be visited only by cavers with proper equipment: neoprene suit, helmet with electric light, neoprene socks and gloves. Having a neoprene hood would be very useful, because the water is very cold (5 degrees C). 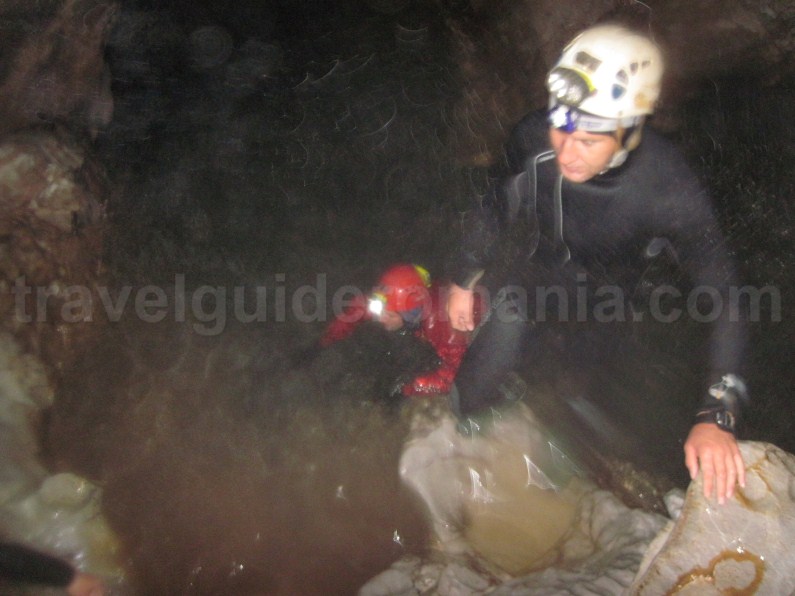 Continue following the blue spot on the iron ladder which will lead you to Dolina III. 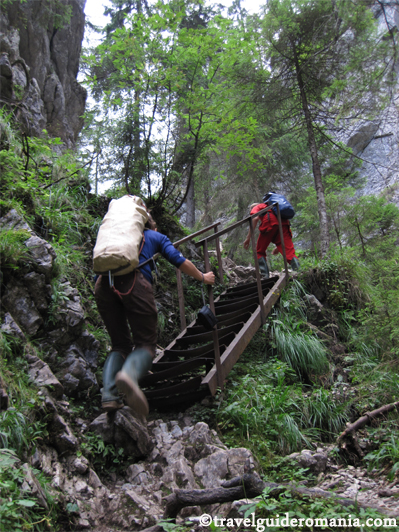 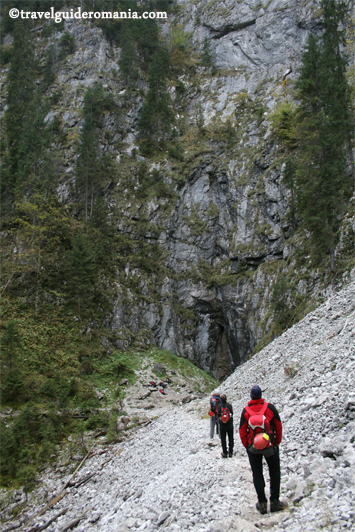 There will be a path that takes you to a second entrance of the cave. From where you can make a backwards route into the cave, or you can go up a scree. The terrain is pretty rough and it takes you on the Southern side of the doline through a 200 m slope. 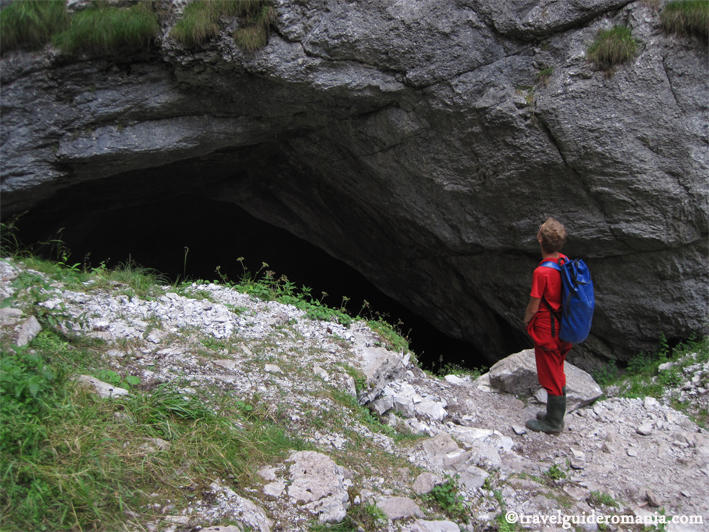 After 30 min, you get at the upper part of the track. The route continues on the brims of Dolina I and III. 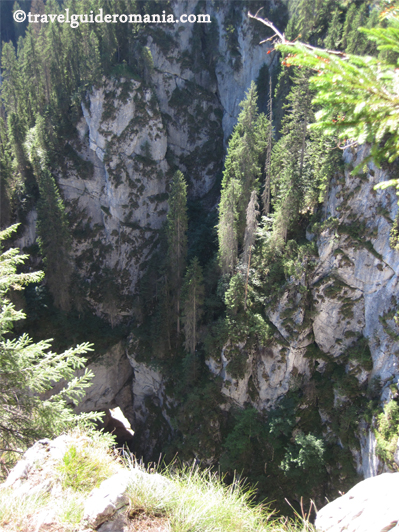 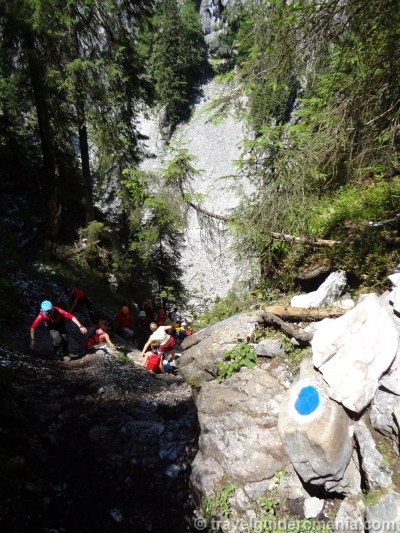 The areas of the cave which are not marked for ordinary tourists, is recommended to be visited only by professional speleologists.

! If the water level is above normal, it is recommended that the group should NOT carry on with the route.

Also, if the water level is too high, it is recommended to mount ropes in three places. This way you will avoid a difficulties on your way back. You will need one 30 m rope and minimum 15 carabiners for this route.

Acces in the cave for cavers teams

According to the access procedure of Apuseni Natural Park you will have to get approvals from:

Although in older books it is mentioned that you may cross the cave by boat at the moment it can be done only with neoprene suit.

On the map 13 lakes are signaled but actually are only 6 areas where you have to swim. The flash floods have reconfigured the floor of the cave. So, it wouldn’t be advisable to carry with you your inflatable boat.

Given its configuration, crossing the cave in neoprene equipment would be more practical and fun.

Leave your luggage at the entrance, in Sala Taberei (“Camping Chamber”).

The cave’s gallery is astonishing and it is 30 m high.

The depth of the watercourse varies: it can either reach your knees, or force you to swim. If you wish to reach the final siphon, make sure you know how to swim.

One of the most interesting halls of the cave is the Venetian gallery, with very clear blue waters. The gallery holds one of the mentioned lakes. The walls, covered in stalagmites curtains increase its beauty.

In the chamber of the bivouac you may observe the platform where the great explorers of this cave spent their nights. 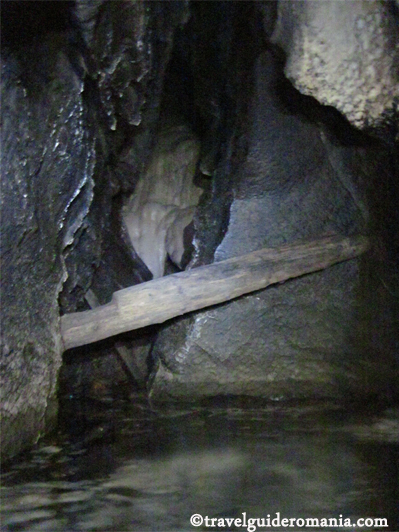 The first exploration of the underground watercourse was made on a length of 200m in 1927, by P.A. Chappuis, R. Jeannel, V. Pușcariu.

The efforts to advance throughout the active gallery were initiated again in 1949 by Institutul de speologie din Cluj/ The Speleology Institute (M. Șerban, D. Coman and I. Viehmann).

Expeditions in Cetatile Ponorului cave have continued until 1957. Then, in collaboration with a climber team lead by Emilian Cristea, the final siphon was reached.

In the following years, the explorations reached to 1700 m from the entrance.

Cetățile Ponorului are the ”scene” of various expeditions held by speleologist from all over the country and from abroad (France, Switzerland, Poland, Czech Republic and Slovakia). 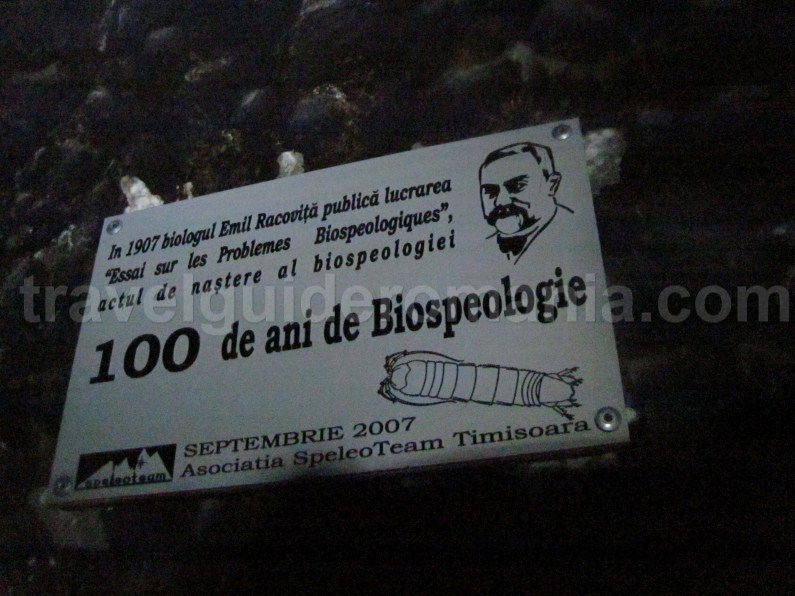 The final wall was climbed 120m (compared to the portal that has only 70 m), but they never reached the top, so it is an open work place for speleologists.

Near the final lake there are a few plates in the memory of these great explorers. 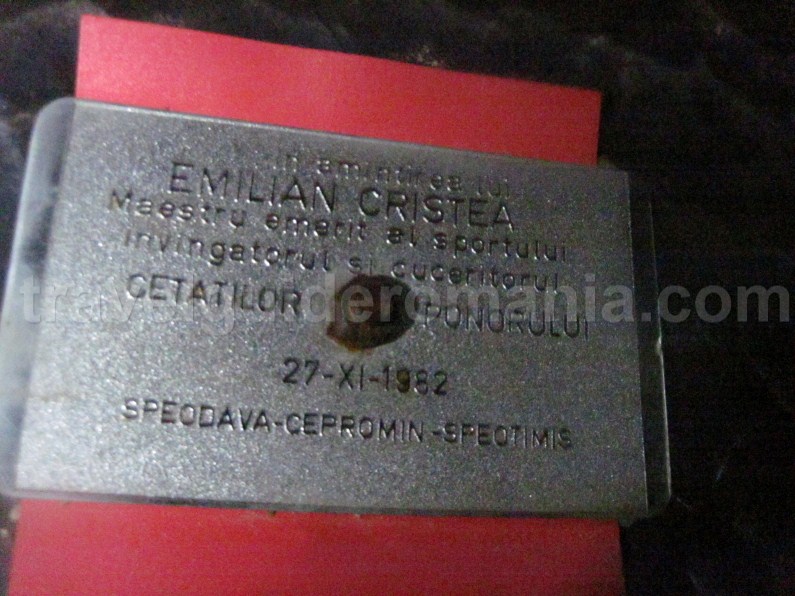 The first mapping of the underground watercourse was realized in 1971 by a Romanian-French expedition. 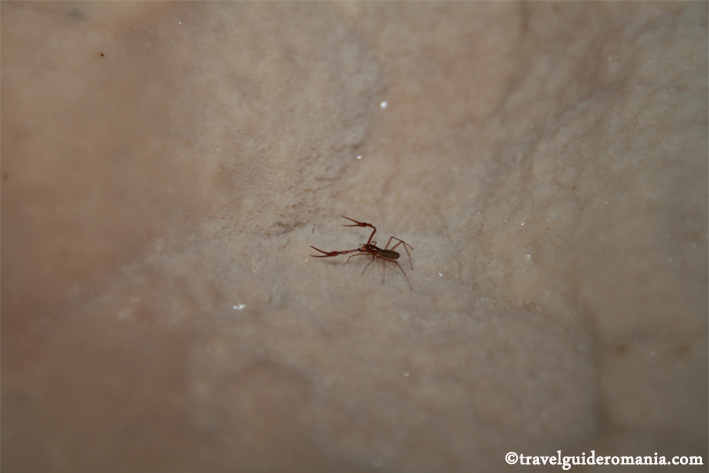 The great amount of water occasionally brings many logs that are caught between the gallery walls.

Depending on the water volume and its flow, a caving trip may last between 4 and 10 hours. 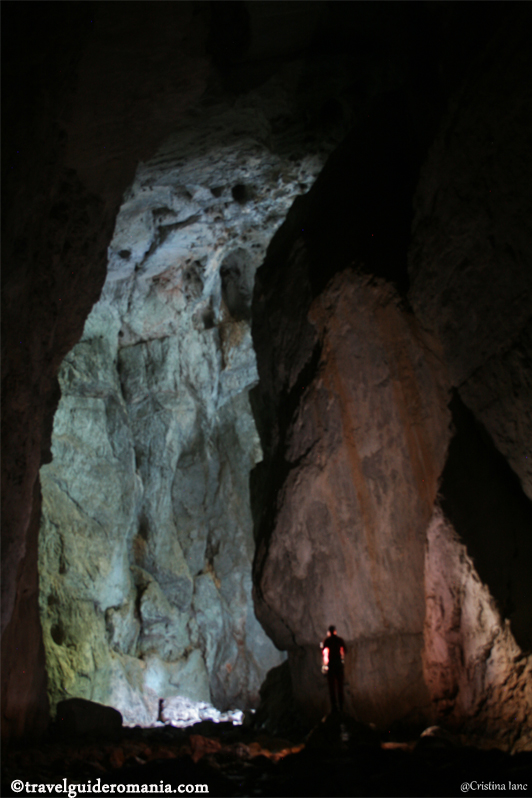 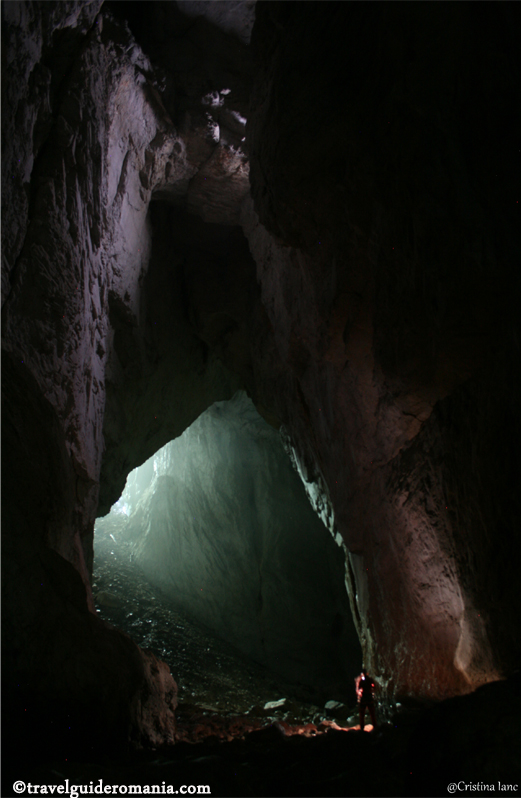 During the periods in flash floods and downpours, the cave becomes impracticable.