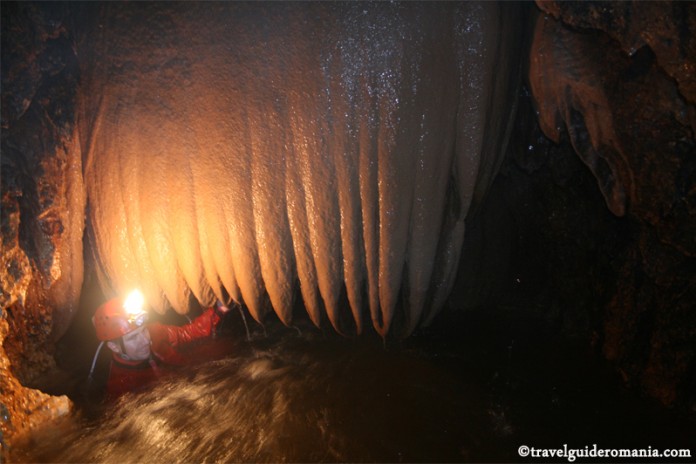 Sura Mare is one of the Top 10 caves worth visiting from Romania.

Sura Mare is located in the West of Sureanu Mountains (Sebesului) in Gradistea Muncelului Natural Park along the course of Lunca Ponorului stream.

The cave is on the territory of Ohaba-Ponor village near Pui town, in Hunedoara county.

The access: by train is a bit tricky, because it is possible only through Ponor station (on the route Petroșani – Simeria) and then you’ll still have 4 more km, either to tramp or hitchhike, till Ohaba village.

Therefore we recommend you to take the car. If so, here are the routes:

Once you get to Ohaba village, leave your car somewhere safe and tramp along the Ohaba valley for aprox. 500 m.

We strongly recommend even to ordinary people, who aren’t professional speleologists, to visit the cave’s portal because of its impressive size: 30 m height and 12 m width.

In your attempt to reach the portal, be cautious if the watercourse of Ohaba river is larger than usually, because you might really wet your feet. During the summer, if you’re careful enough and wear rubber boots you may easily avoid this inconvenience.

In case you are not used visiting caves with underground rivers maybe  is not a bad idea, to ask a guide to show you the route. 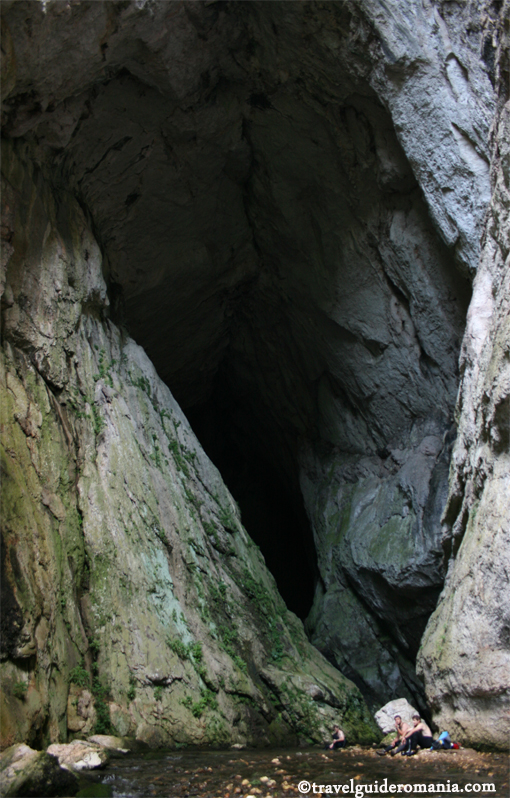 According to visiting procedure of caves in Romania the permits for visiting Sura Mare are:

-permit from the Speleological Patrimony Committee

-permit from the Administration of Gradistea Muncelului Natural Park

Time needed for visitation: taking into consideration the difficulty of the route and the number of people who will form the group, the visit may last between 5 and 10 hours.

Temperature of the water: 7 to 9 degrees

Fauna of the cave: the intervertebrate fauna is relatively rich at the entrance and poor on the platforms covered with guano.

Among others, it was discovered a beetle from the order Sophrochaeta and an underground crustacean (Bathynella) in alluvial sands of the underground watercourse.

Șura Mare is unique in our country for harboring the most numerous hibernating bat colonies.

The distance from the entrance to the larger observed colonies is of aprox. 350 m.

Pipistrellus pipistrellus colony, consisting of several thousands of individuals, is the only case known by specialized literature to exist in the temperate climate. At higher peaks, there are to be found on walls colonies of Miniopterus schreibersi.

The necessary equipment to visit this cave: helmet with lighting source, neoprene (shirt/top, trousers, socks and glove) which is mandatory because the water temperature is of 7 to 9 degrees.

In order to visit it more easily avoid using rubber (knee) boots that prevent the cavers from swimming when necessary. Use instead sneakers or (ankle) lighter boots with adherent soles.

Because in Romania it is forbidden to use acetylene lamps, be equipped with batteries light sources instead.

If you want to advance more with your explorations, near the last cascade, e.g. Sala Prieteniei (Frienship’s Hall), it is necessary to take harnesses and individual climbing equipment to help you out with a positive jump of 8 m.

A rope it’s mounted in this place, but we recommend you bring your own, as we cannot guarantee for the one that already exists is in a good condition and proper to use. So better be safe than sorry!

There are many exposed areas in the cave that force the cavers to climb walls.

Make sure that, as a leader, you choose the right persons in the team to take these routes in Șura Mare.

A less difficult route, accessible to a grater number of cavers, can be traversed till Sala Mendip (Mendip Hall) or Sala Mare (The Great Hall) – name used more often by the specialized literature.

Untill this hall you have a distance of 2,300 km waterfalls with swirling zones, lakes (which make you use your swimming skills) and areas prone to flooding (semi-siphons). 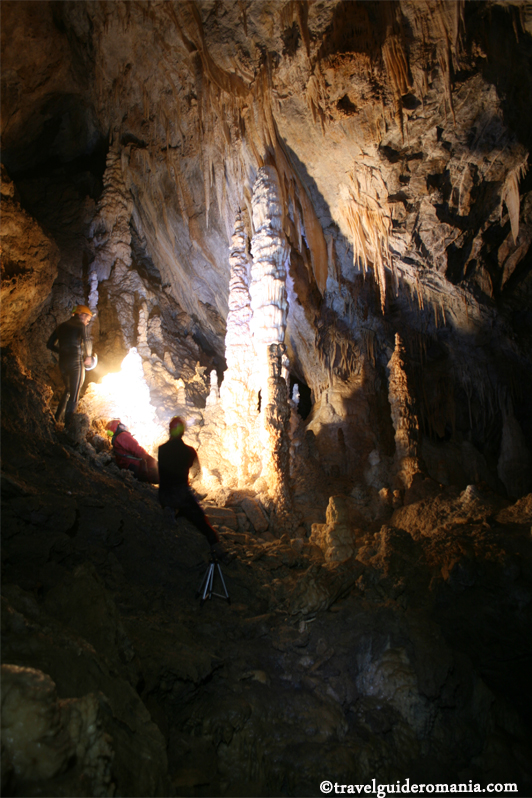 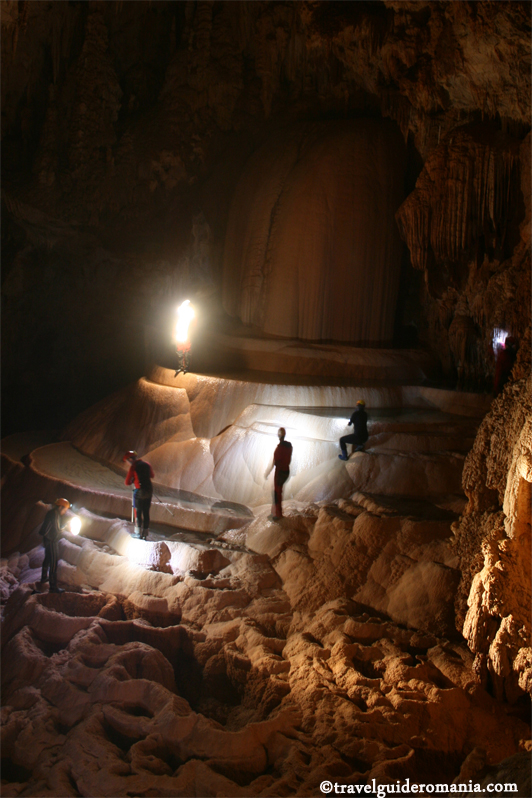 Historical data. The first explorers of the cave’s entrance sections were Toma Ienciu and Schadler, in 1929.

A few years later I. Gheamiaoi crosses aprox. 700 m by boat, and published the description of the route in 1934

In 1963, T. Orghidan and I. Bostan succeeded to reach a distance of 1,800 – 2,000 m from the entrance, using lightweight equipment, diving suits and pneumatic tyre. This way they had the chance to observe and admire the beautiful enormous concretions – mushroom shaped canopies – that were blocking the access here and there. In 1967, M. Dumitrescu and his collaborators published the description and maping of the first explored 1,000 m.

In August 1967 John Dolman and Tony Oldham (both from Bristol UK) were the first cavers to use wetsuits extended the then known cave. John Dolman reached the large chamber and called it Mendip Chamber (after the Mendip hills south of Bristol). Seeing the cave extended onwards, he was instrumental in organising the 1968 and 1969 Joint British Universities Expedition to further explore, survey et al. The 1968 exploration was accompanied part way through the expedition by as I recall 2 people from the Bucharest Speleological Institute, 3 from Rumanian TV and 3 from Yugoslav Speleological Institute.

The Romanian – Yugoslavian (1967) and Romanian – English (1968 and 1969) expeditions reached the siphon lake found on the upstream of the underground river, beyond the Mendip Chamber.

Description. The underground active watercourse of Ohaba Valley was dug into two paralel geological fractures spaced at 1 km one from another. These lines represent the link between the Jurassic and Cretaceous eras.

Here and there, the water leaves one cleft to pass into the other through widened joints. Due to this fact, the watercourse is sinuous (winding), the ceiling is very high and galleries are narrow. 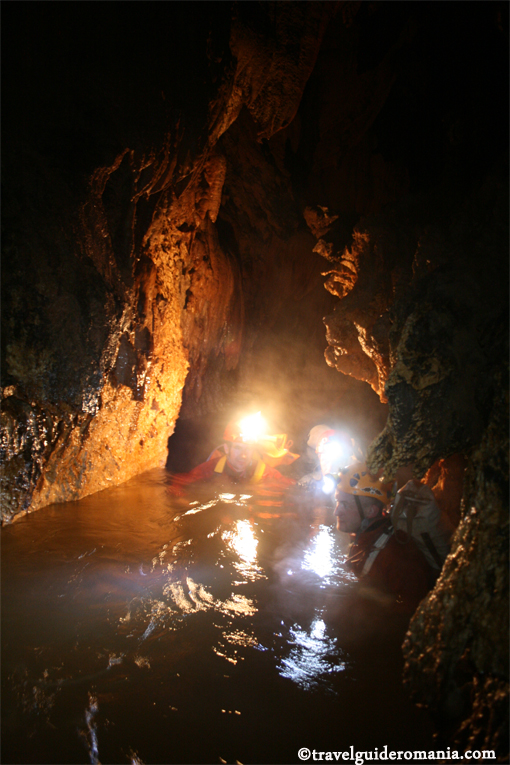 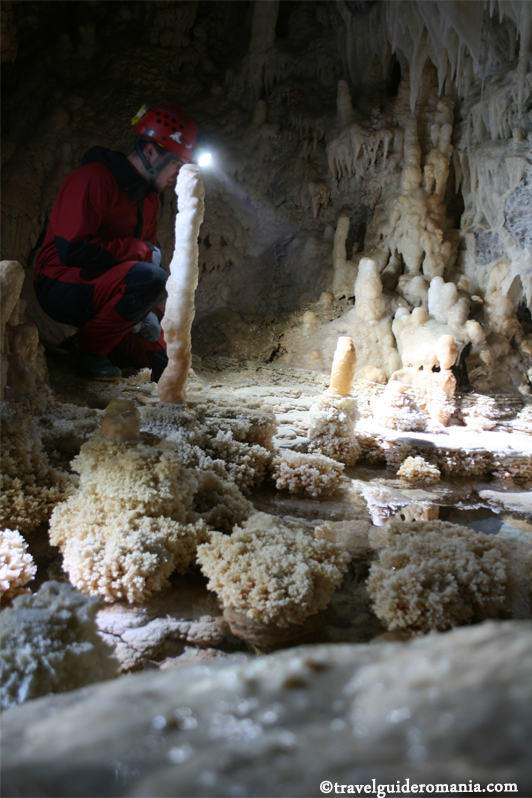 At the entrance of Sura Mare cave you pass through some big stone blocks and a 20 m lake with a depth of 1,2m. One first big room having 8-10 width, and hight 40m. 250 m beyond this room, the gallery turns to East and follows this direction for a 500 m distance;

Here the gallery turns again to North. We are now 950 m far from the cave’s entrance. At this point, on the left shore of the underground stream appears a small permanent tributary (affluent).

Throughout the first kilometer, the ceiling is 30 – 40 m high, except Dorna Mare where it lowers down to 2 or 3 m. 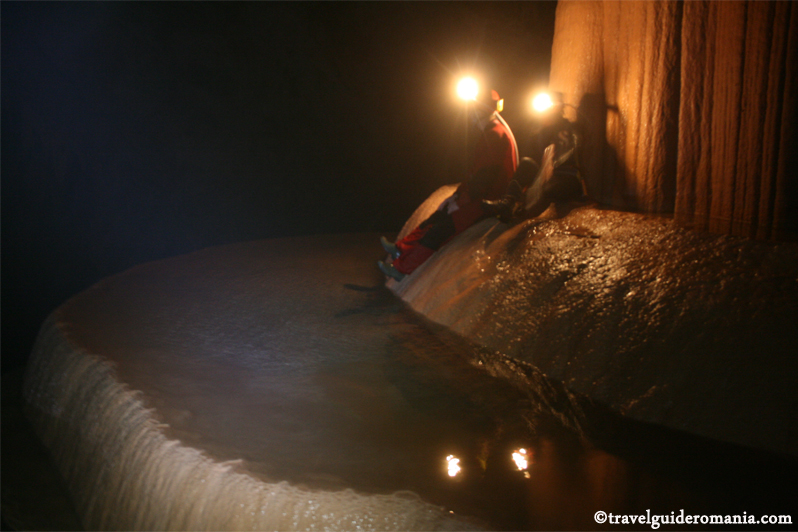 Delightful big rusty-yellow or white calcite formations may be encountered after 1,200 m. Their appearance and origins give a striking characteristic to Sura Mare from the speleothemes (cave formations) matters.

In this part of the gallery, that stretches till Sala Mare (The Great Hall), same features are available across its entire length, except for the ceiling that alternates its hight between 10 to 15 m above the water level. 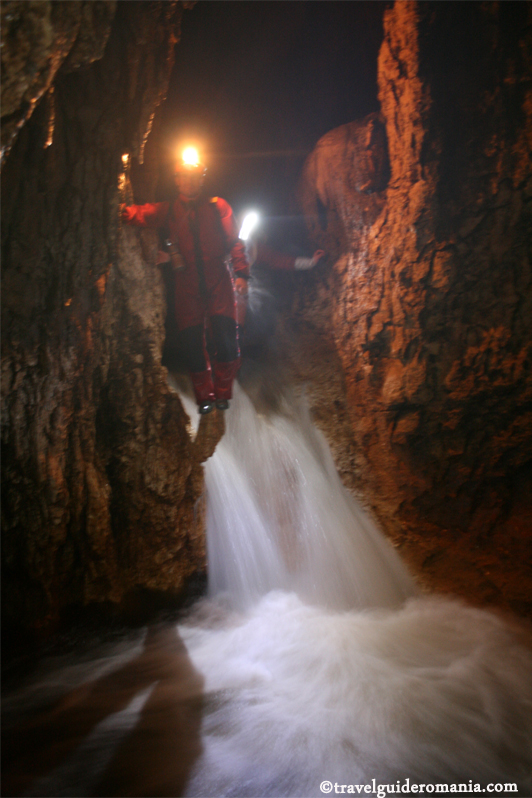 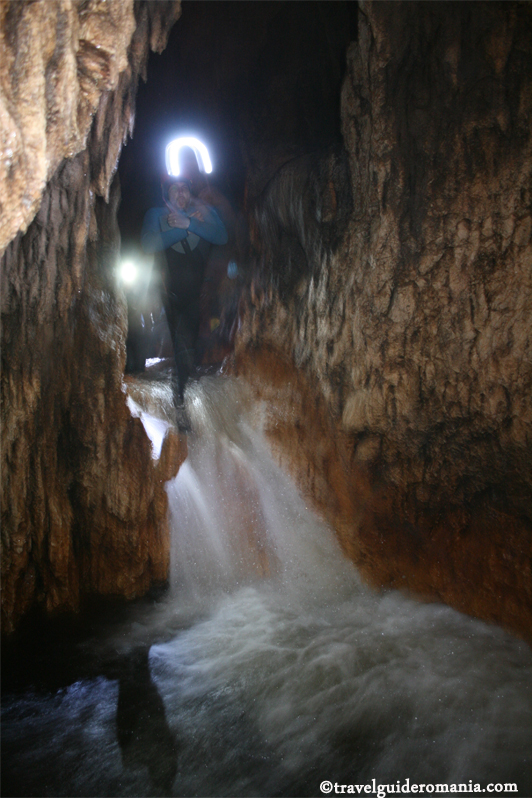 Crossing either above or underneath the “mushrooms”, leads to a toilsome exploration and difficult headway. The slope becomes steeper and you’ll have to climb 2 – 3 m high waterfalls.

We are now in Sala Mare/Mendip (2,300 m far from the entrance), where the most beautiful and enormous gours (rimstones) from the country garnish the chamber.

At the end of the of Sura Mare cave, there’s a gallery with a 80 m high waterfall which can hardly be seen because of the water vapors released by the downfall. It was escaladed in 1990s – an act which crowned the entire exploration of this colossal karst phenomenon. 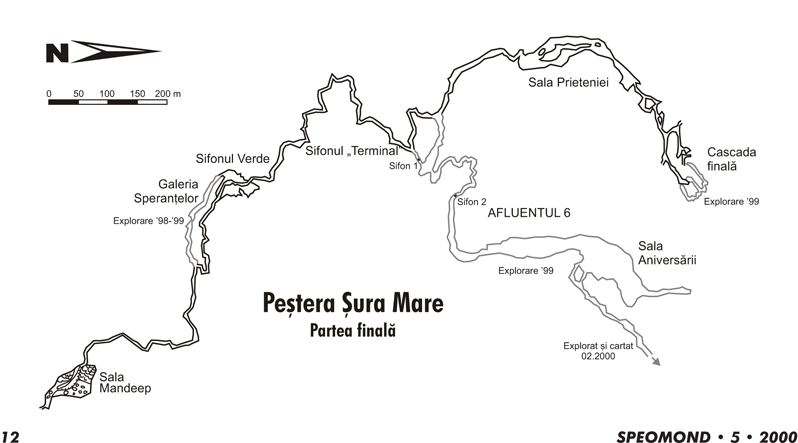 On the way out of the cave, the route will be a lot easier due to the ‘caver friendly’ watercourse. If on the way in we had to surmount the cascades, on the way out we can just jump into a giant’s kettle formed at the base of the waterfalls.

During the periods rich in showers or flash flood, the underground route becomes mainly impracticable. So do not adventure into the cave during these periods of the year!

Since the whole region where Sura Mare is located abounds with beautiful places worth visiting, we recommend you to check out