V5 Cave (V5 Pothole), also called the Cave from Fața Muncelului, is the deepest cave in Romania. Is has a level of difference of -643metres and a widening of 20 km.

Going through this cave it’s a true endurance test. It involves rappelling into many vertical pits, passing through the narrow passages, free climbing, down – climbing.

To reach the pothole terminus and come back, several days of crossing the cave and underground bivouac are required.

The V5 Cave is one of the most difficult Romanian caves. The pothole was discovered in 1986 by Paul Damm, a mountain man, speleologist and geologist. As the late caver recounts…” there at the edge of the clearing, a rotted fir trunk was coming out under the grass having an aberrant angle trajectory…Hence, The V5 pothole would be called so, or Fața Muncelului, after the local place.

Cave or pothole? The entrance area (until Paul Matoș Hall) has a pothole configuration (a vertical cave). The rest of the cave system has mostly horizontal-downward development. 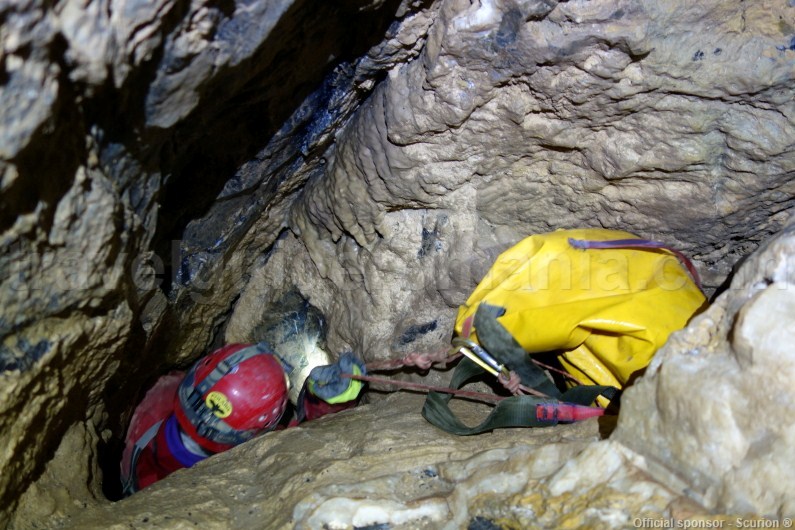 History of exploration: The exploration of the the deepest cave in Romania has been done by organizing camps attended by cavers from all over the country. Many narrow passages had been enlarged, thereby facilitating the passage for the speleologists. Until 1992 the depth of -273m has been reached. In 2004, after enlarging 50m of very narrow underground gallery, the Paul Matoș hall was discovered.

V5 cave has one of the largest subterranean natural halls in the country. It has 415m length, between 50 and 70 m width, 30-50m height and a volume of about 1,2 million cubic meters. 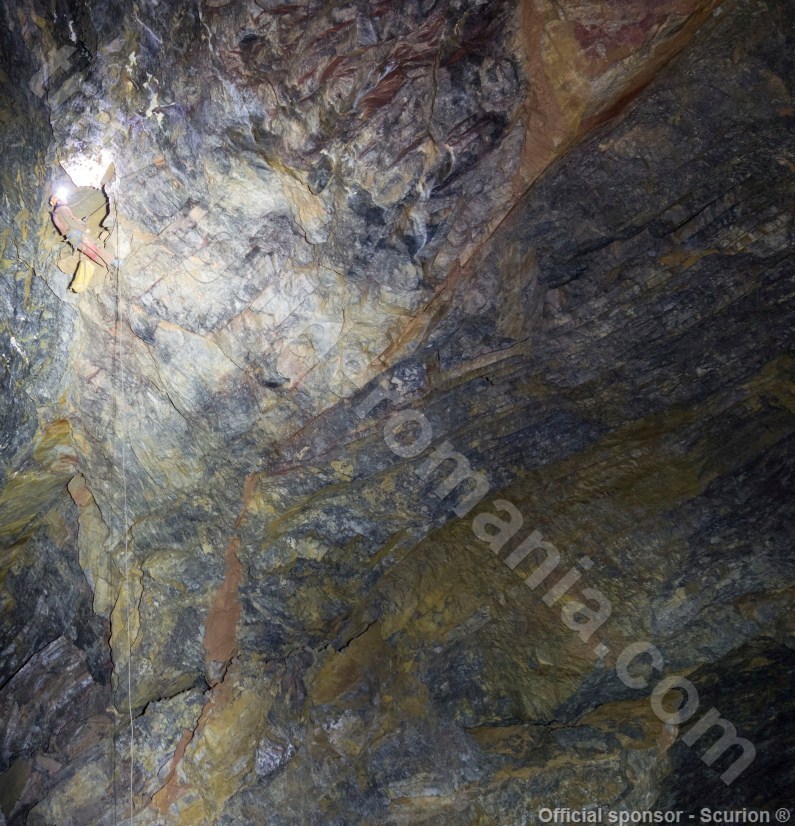 At the end of the Paul Matoș hall, after a descent of about 100m difference level, we intersect the main river of the cave: Iancu’s River.

At the moment, the V5 cave exploration is continuing. It is a complex hollow, having several halls with over 100m length long, underground canyons and galleries which are developed on several levels of erosion.

In 2008, the junction between Frigiderul lui Gigi (Gigi’s Refrigerator) Pothole and the V5 Cave was made. Therefore the cave system increased significantly.

Hence, V5 Cave, the deepest cave in the country, impresses not only by the depth of its underground opening. It is extraordinary, given the complexity and the size of the underground hydrological system that drains all water from the Plain area Padiș.

Location and access: The V5 Pothole is found in the Apuseni Natural Park. It is at the altitude of 1367 m, in the Central-North region of the Basin Padiș – Cetățile Ponorului Cave, on the eastern side of Vărășoaia peak.

Access în the V5 cave is provided only having notice from the Speleological Asset Commission, Apuseni Natural Park and Mountain Rescue Bihor .You must provide proof of technical training of the team in order to obtain the entry permit. The cave access area is protected by gate.

Recommended period to visit: considering the risk of flooding posed in cave entrance area (until about Paul Mațoș hall) it is recommended to schedule the visiting during drought seasons. Either winter when there are no rain precipitations, either autumn. 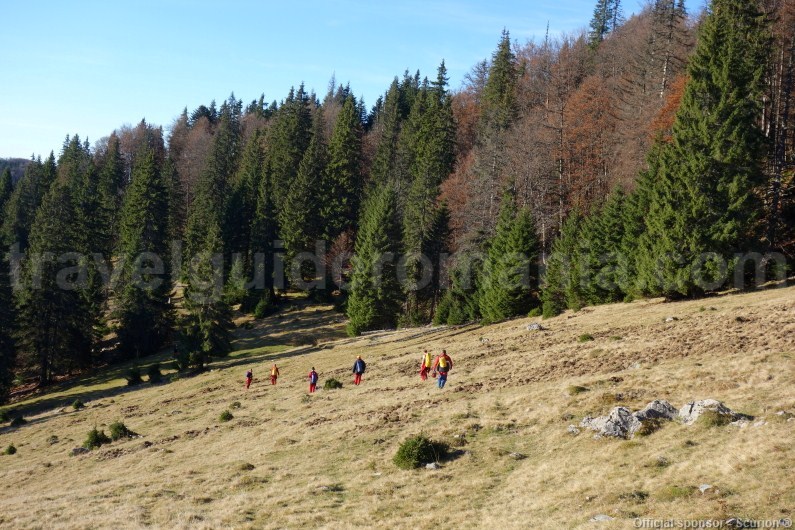 The team of cavers should consist of 5, up to 7 people. It is recommended that the tour participants are not portly people. They might encounter many difficulties in the cave narrows. The entrance area is not quite labyrinthic, you shoud not encouter any orientation problems. We do not recommend to take beginners. The people entering the cave will have to be autonomus on ropes.

The TGR team visited the cave în November and reached to the Paul Matoș hall.

V5 pothole visit duration – to reach Paul Matos Hall it takes between 3 and 6 hours. This can vary depending on the number of participants, physical and mental preparation . It should take about the same time to come back out of the cave.

The V5 pothole cave crossing could be divided into several sections:

Entry sector – Aragonite Hall (-85m): the cave crossing consists in down climbing or on descending metal stairs mounted in the cave. While passing through, narrow paths are encountered, but none that pose serious problems. 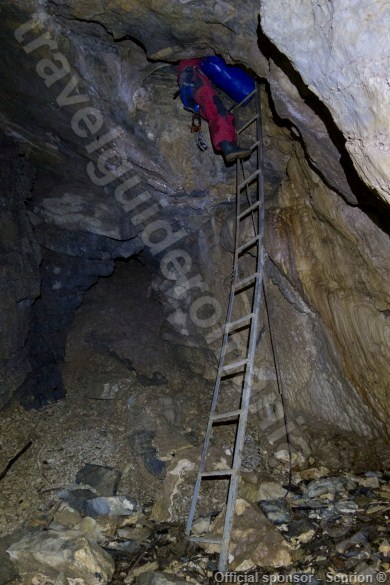 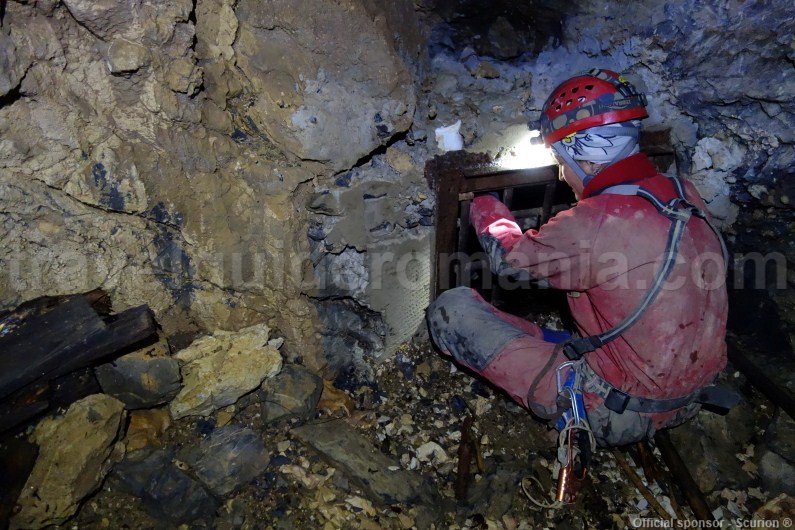 At -50m, we meet the first greater vertical, about 18m. Fixed rope is mounted. At the bottom of the vertical passage the underground gallery continues downward with a small, about 2m free down climbing among boulders. 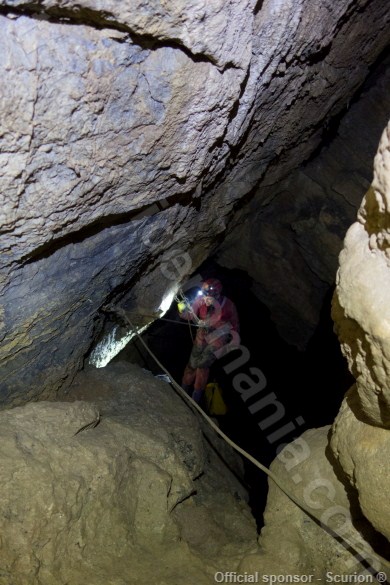 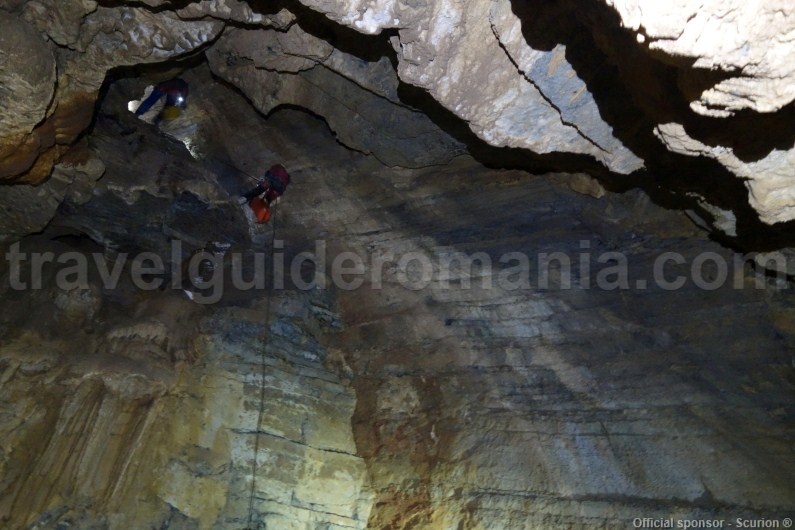 Moving downward we pass among large stone blocks to reach the Hall with Aragonite. As the name implies the hall accommodates aragonite formations. It is impressive how after many straits we get in this hall where about 15m of gallery ceiling is covered with crystals clusters.

They look like flowers that start from a joint bundle and finally pamper themselves. The length of a bundle sometimes reach 20cm. The crystals aren’t white as we are used to have seen in other caves. They have a thin film of clay. 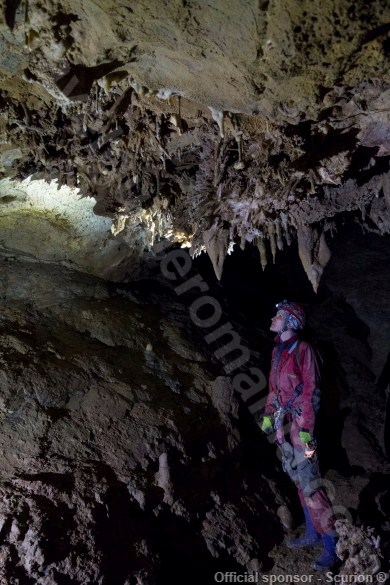 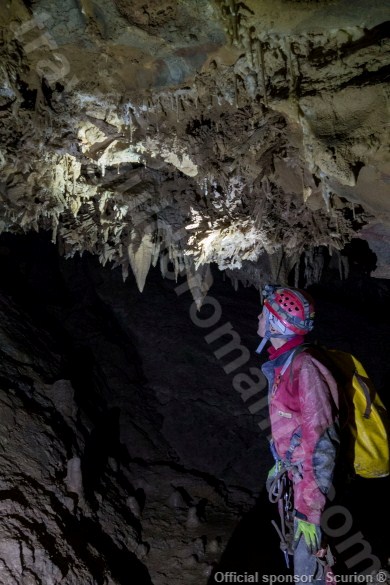 The Gallery becomes a downward crawl for about 15m. 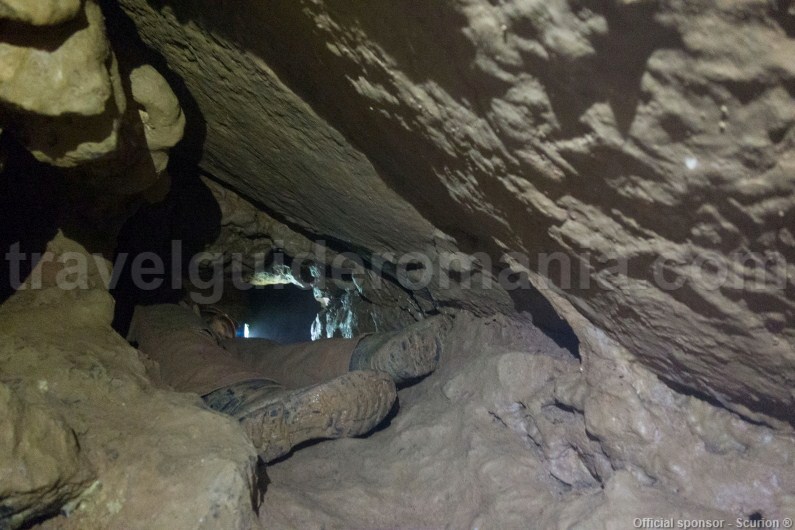 A jumper with stairs and a narrow passage between two boulders get us in a room with a traverse over a pit. You’ll find a mounted traverse line where you can ensure with the double cowstails . 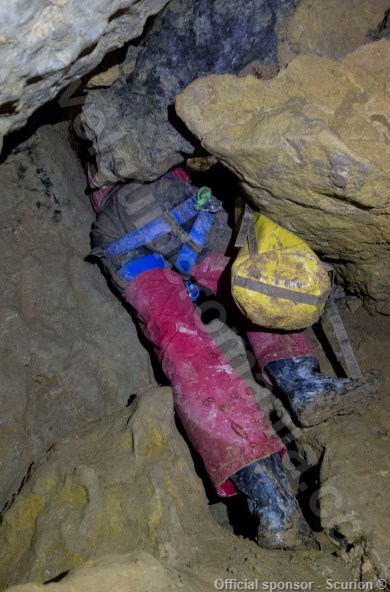 Gallery narrows taking the form of a meander afterwards in a jumper with the form of a bell where a metal ladder is mounted. On returning, when you exit the cave passage is quite difficult for portly people to pass. The ladder is shifted from the position to get out from the upper diaclaze. 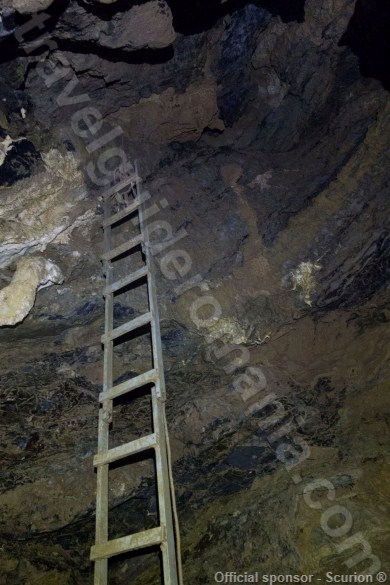 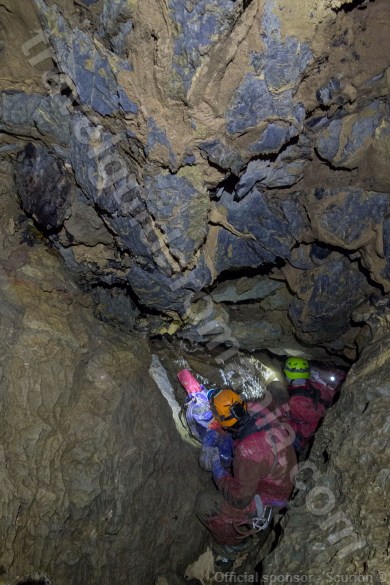 A narrow horizontal passage follows and then an 18m vertical pit. From this area the water starts to run-off the walls. For sure when flooding this trickle of water turns into genuine waterfalls.

From the bottom of the 18m pit the gallery continues as the form of quite narrow meander. We reach the top of a 5m pit with a traverse line routes difficult to pass for shorter people. 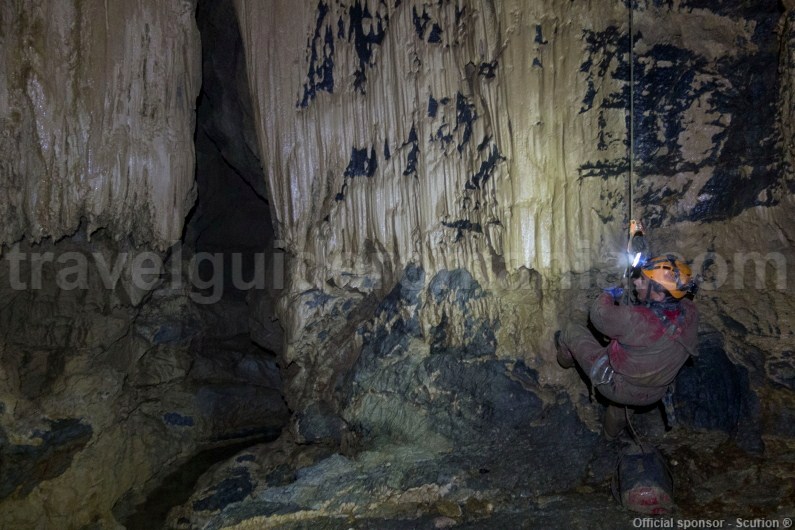 We then have to cross through a sequence of linked pits: P6 , P10 , P16 , P10 , P15. The pits are equipped with fixed ropes. The ropes can be passed, but they are not very comfortable. Many times you have to improvise to overcome an obstacle on the rope. 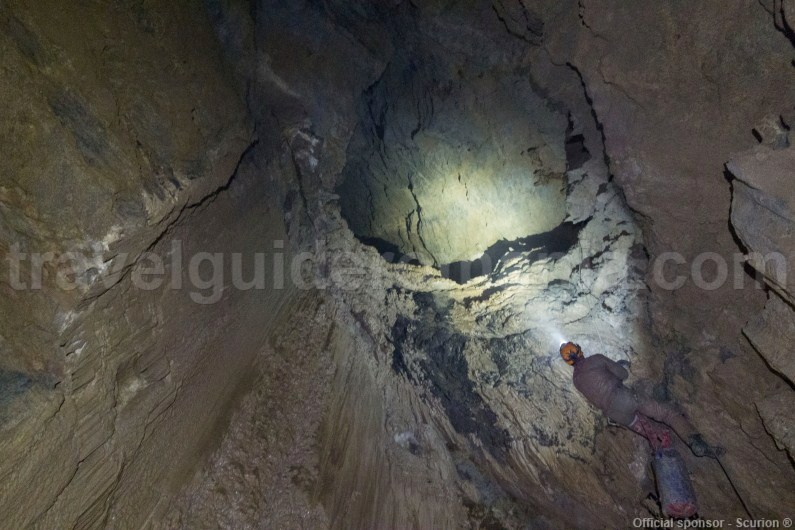 We gain depth. We find ourselves at -188m. Still a fairly narrow horizontal passage and we get to a pit that we should not descend.

The continuation of the deepest cave in Romania goes from where we stand through a window on the opposite wall. We go downward with the descender and when we get at the window, we put the chest ascender and hand ascender to go up. 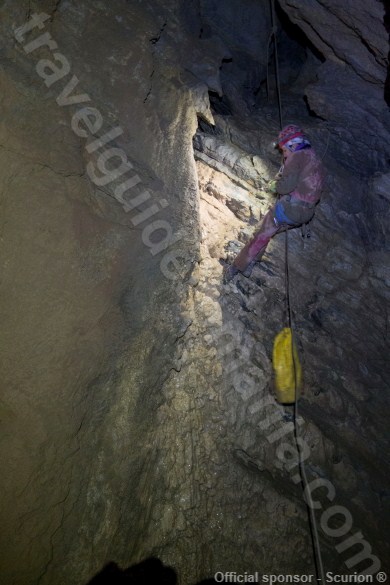 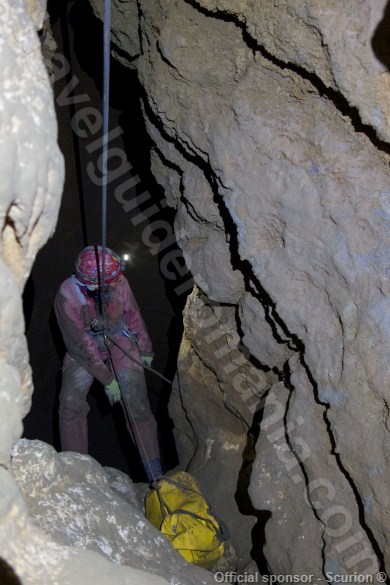 At the exit of pit we enter a diaclaze difficult to cross as it is developed at an angle of about 45 degrees.

We free climb over a pit and encounter another mounted rope descent. It has only 3m but the walls are very close. The descent is easy. We slip through the two parallel walls. When returning however, it will be more difficult.

At the bottom of the pit the gallery continues at low height. Hence we need to crawl forward. The ceiling is so low, you may have the feeling that here is no way you’re on the right track. 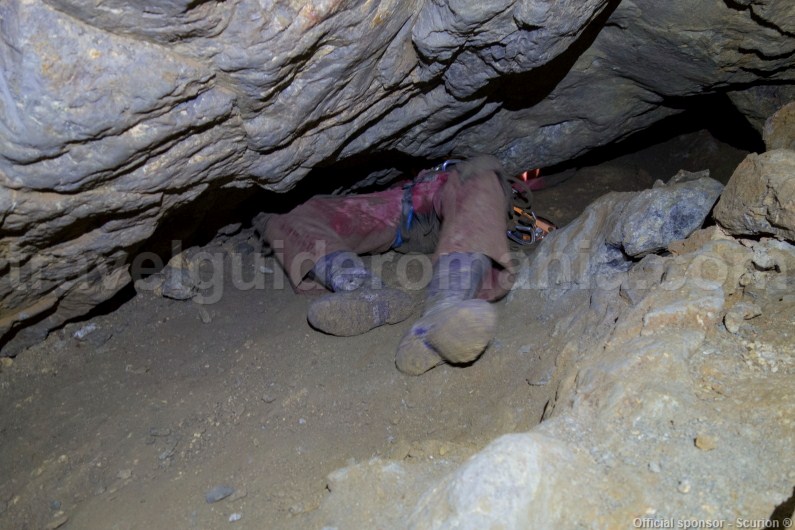 20m of crawling, a pretty serious narrowing and we get into a window. The sound echo is so strong that we realize we have reached a large hall.

A traverse line gets us out on the window’ edge from where with a bright light we become to realize the immensity of the room we are entering.

Thus we arrived in Paul Matos Hall which has a length of 415m . The height of the pit which we about to descend, is not very high, about 30m. From the top you may see huge blocks around the room, fallen from the ceiling at some point. You may also see the permanent bivouac installed here. For those who want to continue caving is good to know that you need neoprene.

The V5 Pothole, the deepest cave in Romania is one of the most complex cave of Romanian Karst.

Visiting it requires good organization and documentation. But nevertheless the reward will be granted. Visiting tours are usually organized up to reaching Paul Matos Hall, because in principle, up until here, there is no orientation problem, the cave not being too labyrinthic. 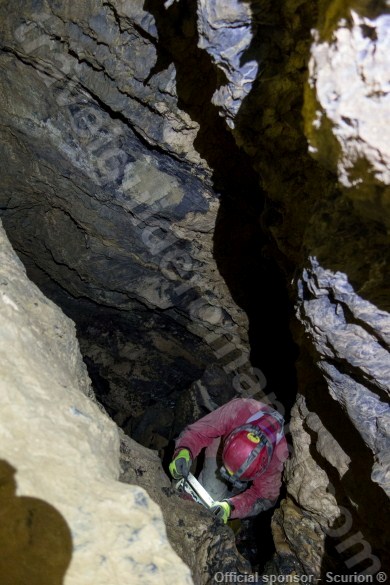 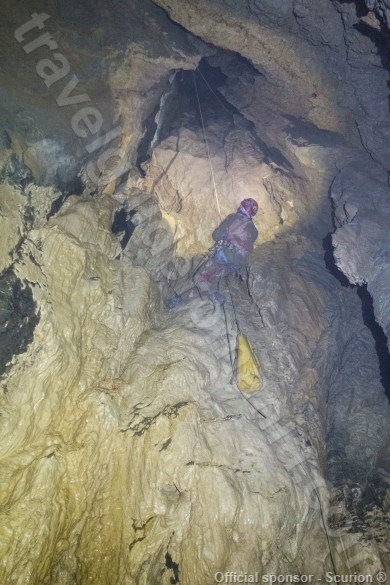