Corvin Castle from Hunedoara is one of the most emblematic monuments of Romania. In the touristic guides it appears also under the name of Hunyadi Castle. 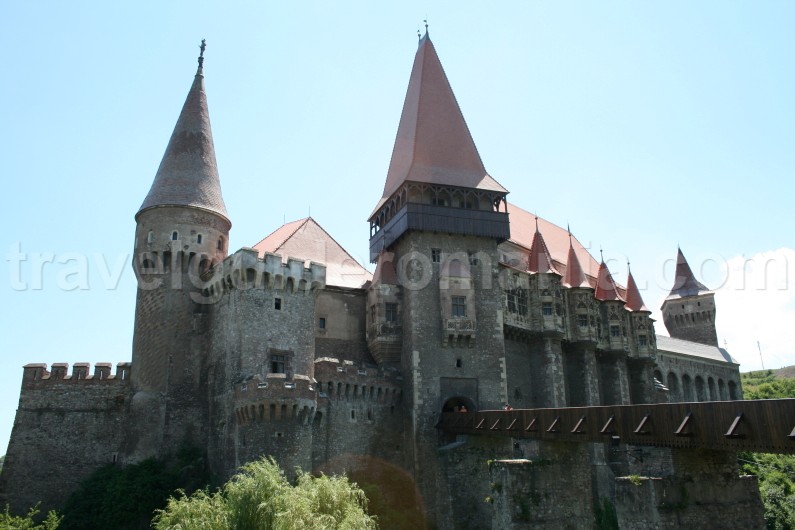 Hunedoara and the region around it, together with the Hateg Country formed even the middle ages an important center of Romanian culture. We will find in this area many architectural monuments well conserved. 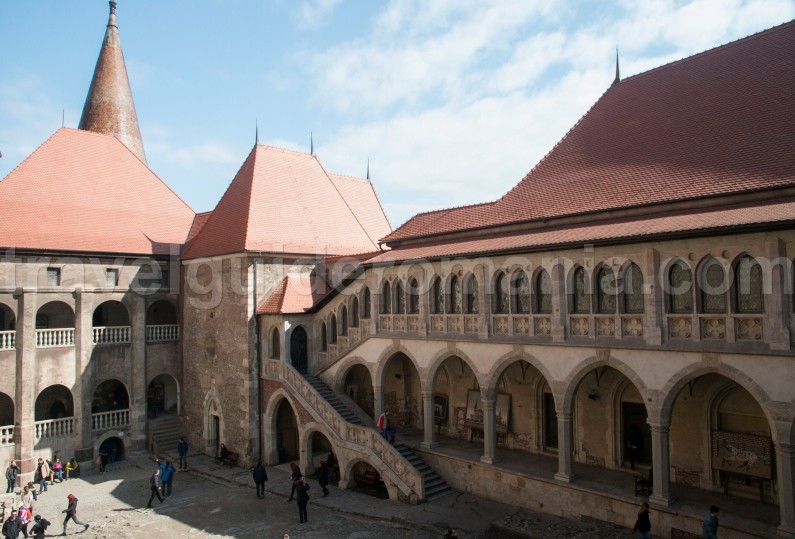 History: The first mention about the fortress from Hunedoara is indirect, made in 1364 year.

After that, we know that in the year of 1409 the fortress is donated to Voicu, a nobleman from Muntenia for his services brought to the Sigismund King. A small edifice was forming the fortress at that time, which was the residence of the castle man.

Ioan (Iancu from Hunedoara), the son of Voicu will inherit Corvin Castle. Becoming Hungary’s governor, Ioan Huniade decides to transform the fortress in a sumptuous castle. The first construction is the Chapel in 1446. In the following years he builds the Palace, which includes the Knights hall and the Diet hall.

At Iancu’s death the castle will be inherited by Mathew (Corvin). In the period of those two leaders occurred the most important works of building inside the castle. The successor of Mathew Corvin is John Corvin, his natural son. The Castle became later the Torok family’s property (1526-1618). After that it became the property of prince Bethlen.

In 1724 the castle get in the property of the Hungarian state and in 1918 in the Heritage Ministry Romanian Cults. 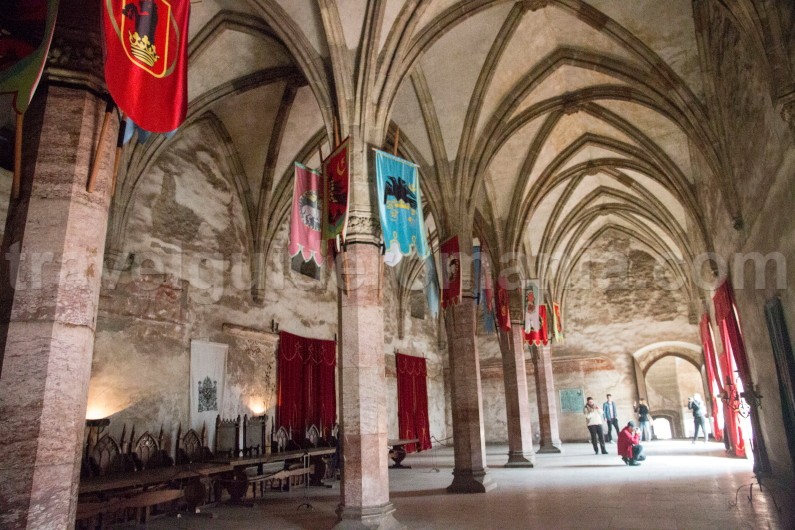 At the base of the hill, where we find the Corvin Castle, there is a big parking place where you can leave your car.

The tickets office: you can find it in the access tower, after you cross the wood bridge. Iancu of Hunedoara built this tower, in 1440-1444, as a defense tower. In the XVII century an entry was arranged here, this is the tourist entrance that we use in nowadays. 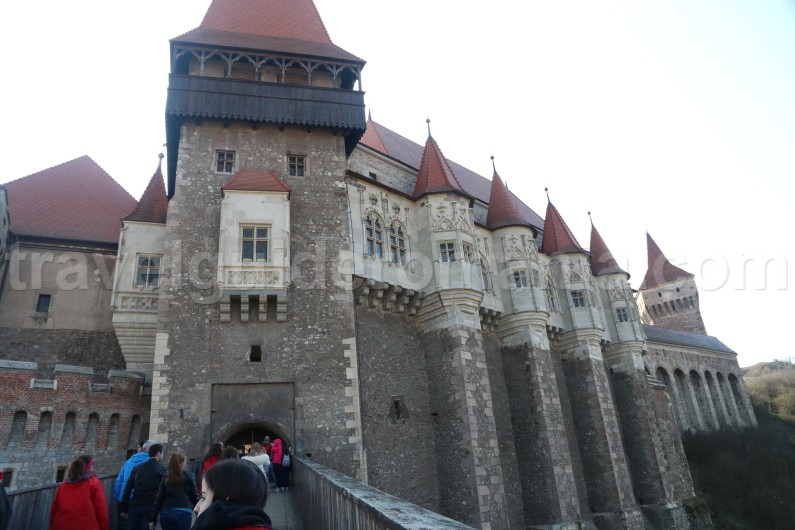 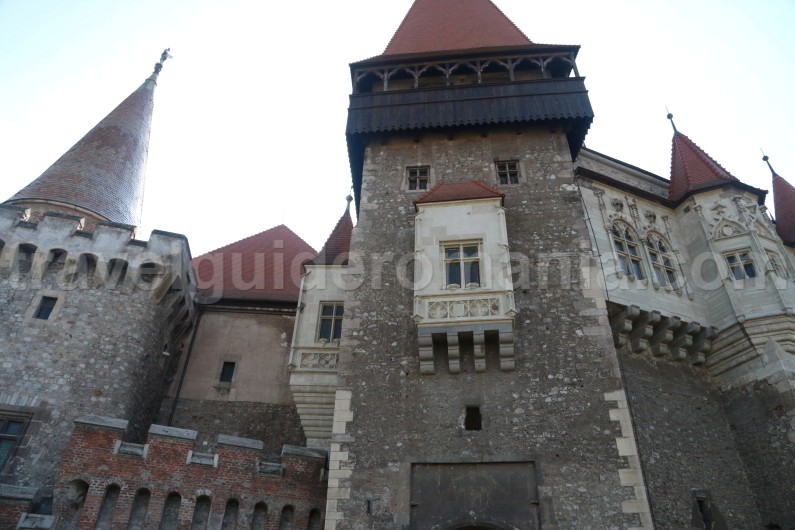 Visiting the Corvin Castle certainly, you will be surprise even from entry area by the medieval air. The wood bridge over the river was at the beginning retractable on the portion near the gate. 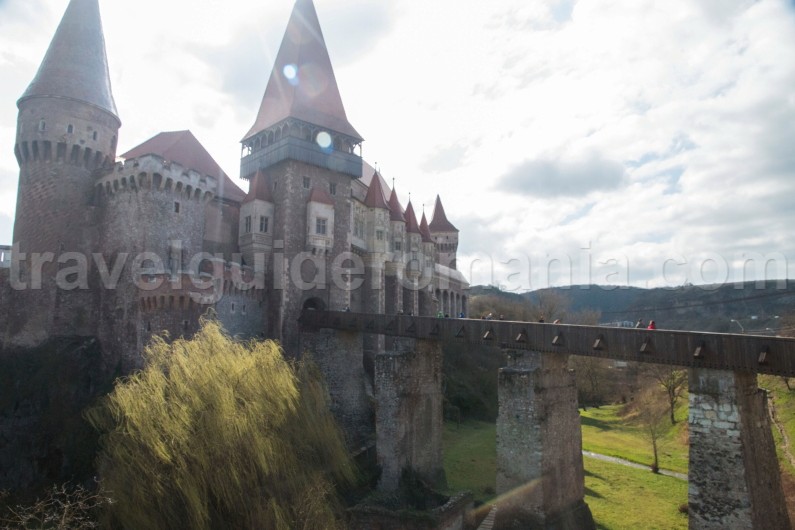 Arrived in the interior court we suggest you to start the visit with the Knights’ hall.It was built by John (Iancu) of Hunedoara in 1446-1456. The hall is situated on west side of the castle, on the ground floor of the Great Palace. 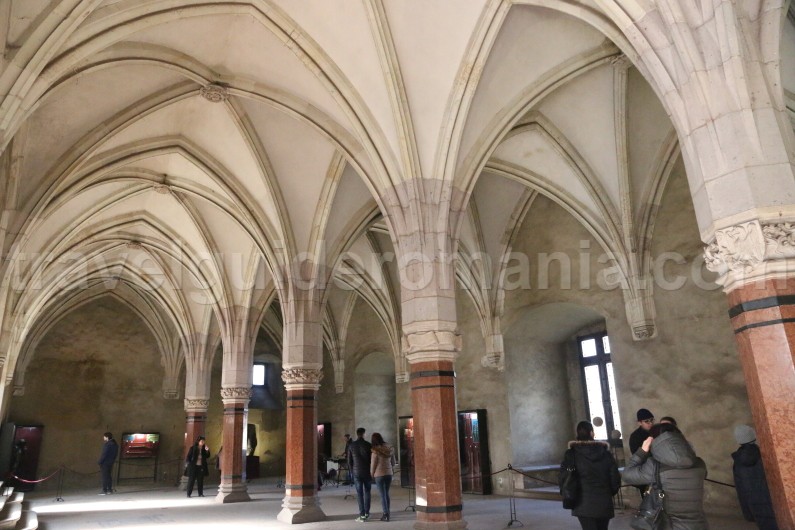 It was built in later Gothic style, being divided by a row of octagon columns. Its function was dining on festive occasions, courtroom and in addition, meeting hall for nobles. 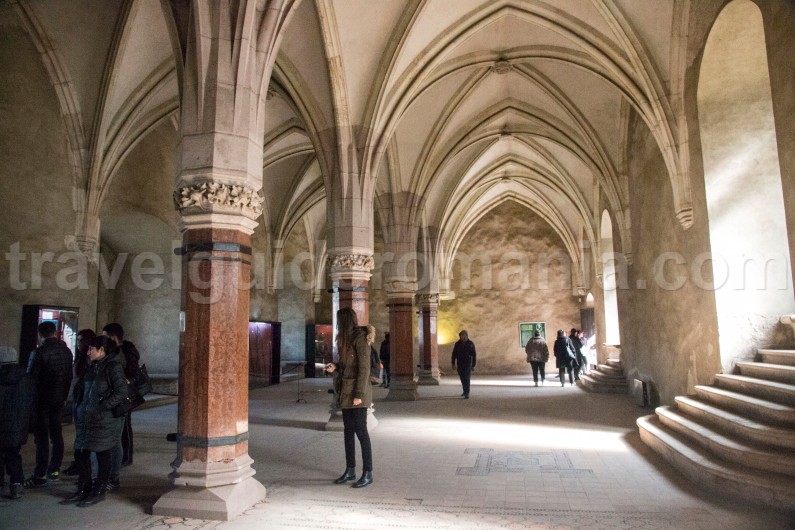 We get in the interior court and after that we climb the stairs which leads at the chapel of the citadel were The King Matthew Corvin is buried.

The chapel is the first construction realized by Iancu (John) of Hunedoara inside the castle, in the reconstruction program. Was built in later Gothic style. 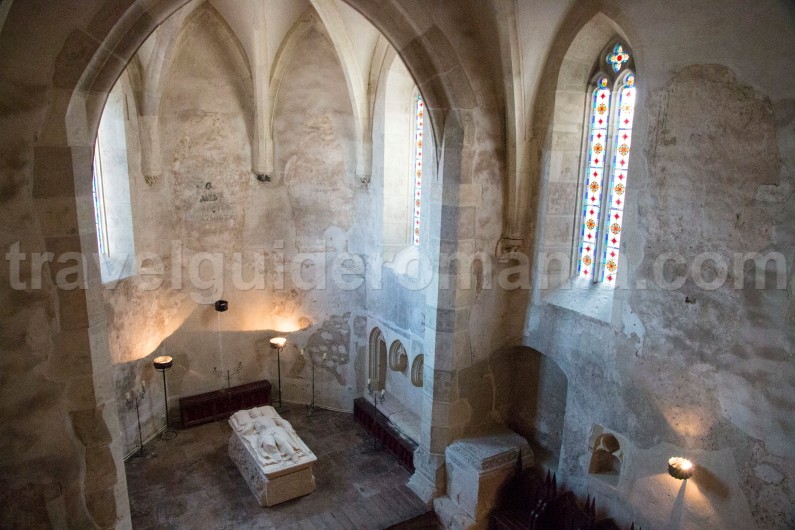 It is realized from a single ship, preceded by a small narthex. The touristic circuit arrives to the balcony situated above the narthex. You can admire the beautiful stained glass positioned in the superior register of the chapel.

The interior of the chapel was modified by lowering the ceiling with 1,56m during the period when Gabriel Bethlem was the castle man. In the center of the chapel the tomb stone of the King Matthew Corvin is located.

We continue the circuit in the northern wing of the castle- The Matthew Corvin’s wing. Here, is found the former bedroom or King Matthew Corvin. 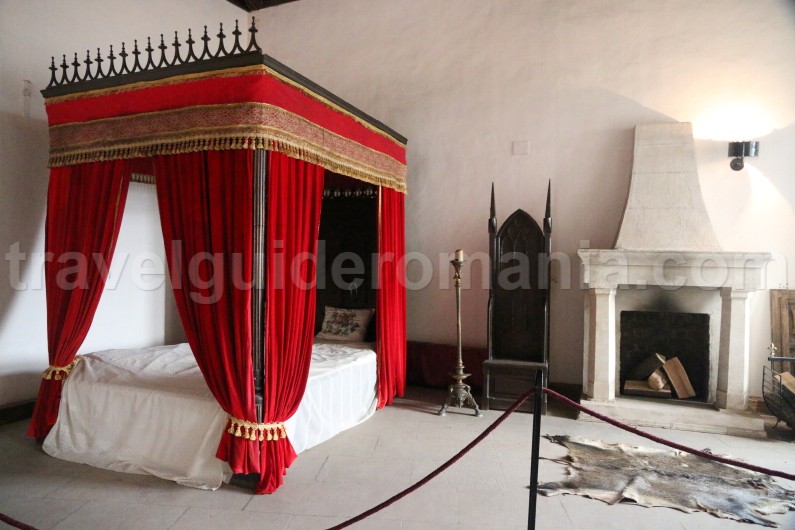 Near it, a loggia is placed toward the interior court. This type of construction, loggia, is considered to be the first renaissance influence in the architecture of Transylvania. The execution is due to some masters who came from Italy. 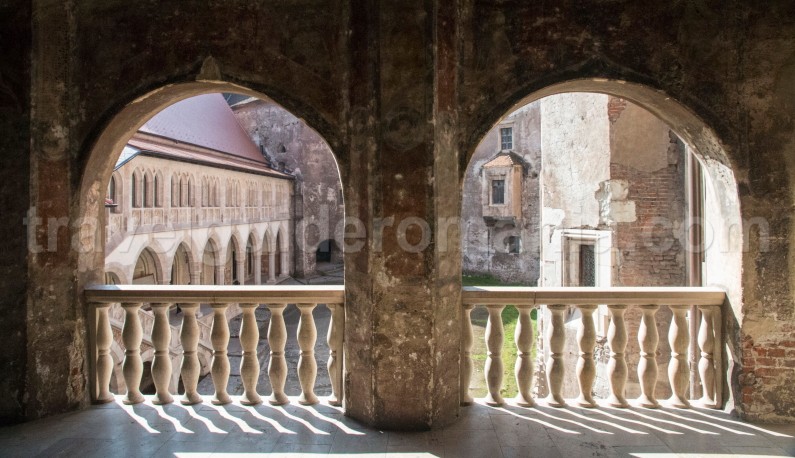 First level of the loggia was soon after construction, closed. However in the years 1956-1968 the original appearance was restored. From the upper floor of the loggia you can continue the tour towards the Diet Hall. 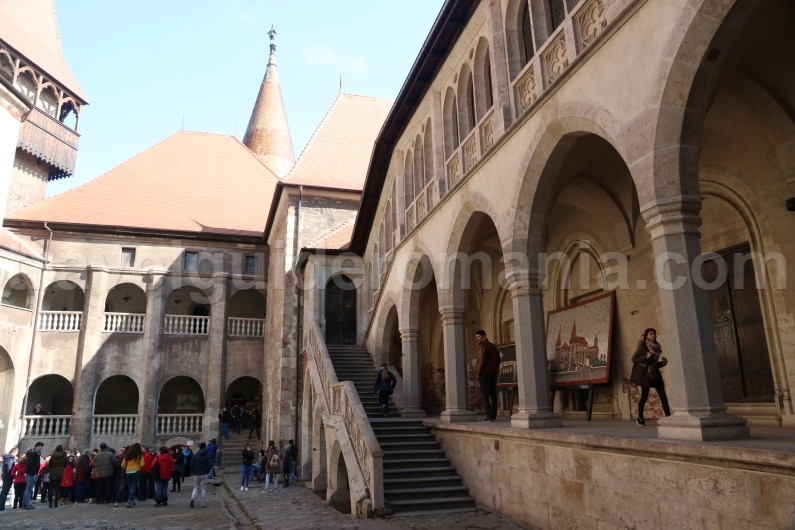 The Diet Hall is a secular space for ceremonies, built during the period of the Prince Iancu of Hunedoara. The Diet Hall was built in later Gothic style. It has in the central shaft a row with octagonal columns and it resembles also with The Knights Hall.

As a result of building The Knights hall, the Spiral staircase and the Chapel  the destination of Corvin Castle will change. It will become a fortified noble residence, the only one of this type at that time in Transylvania. 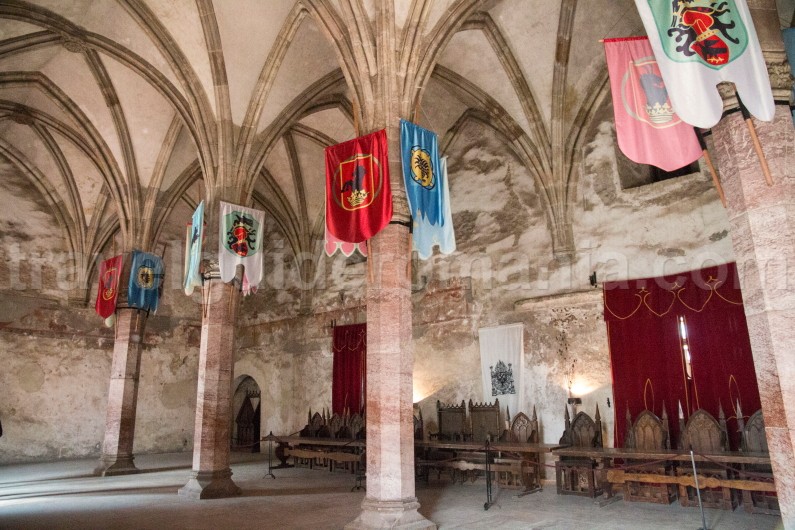 The touristic circuit continues towards The Tower and The Gallery Neboisa . They have been build in the period of Iancu of Hunedoara. Are considered remote defensive constructions.

They had the role to protect the castle in the south part. To get to the tower, we pass through a narrow gallery located on very high pilasters. Those nine pilasters are tied with semi-circled arcs, the distance between them being about 4 m. In the end of the gallery we get to the defense tower. 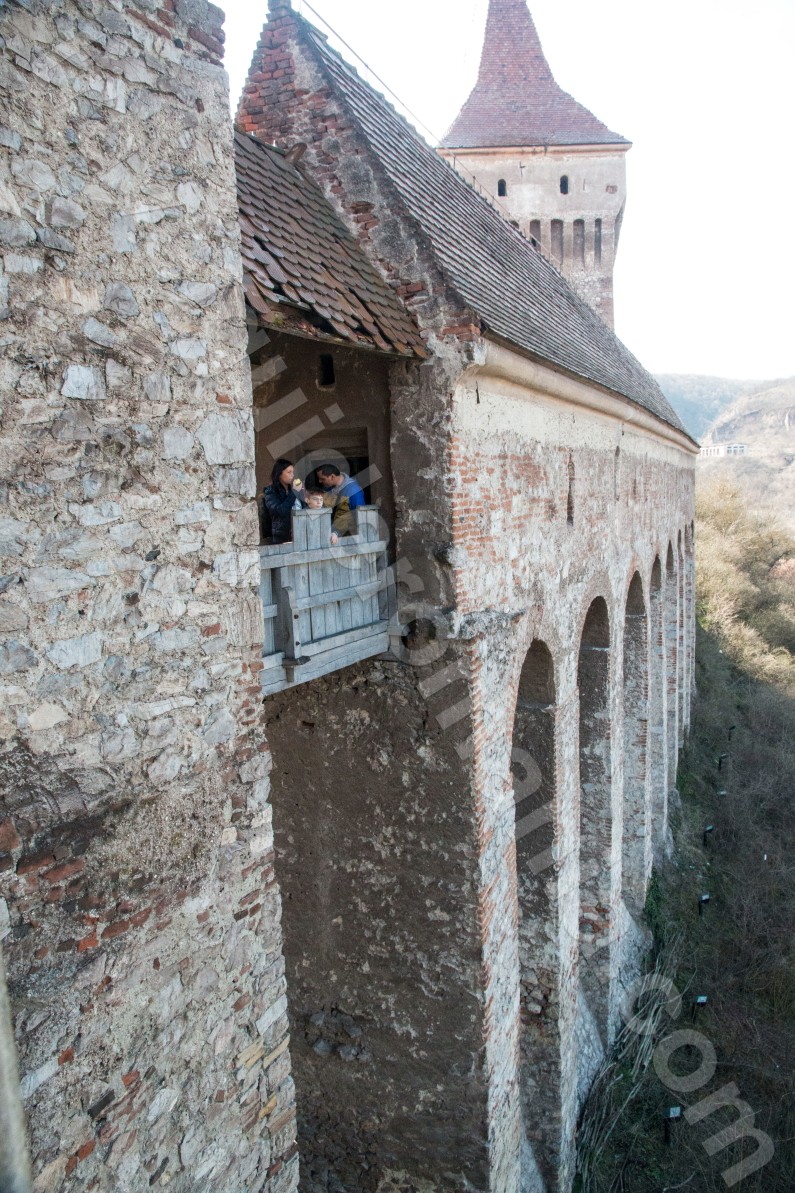 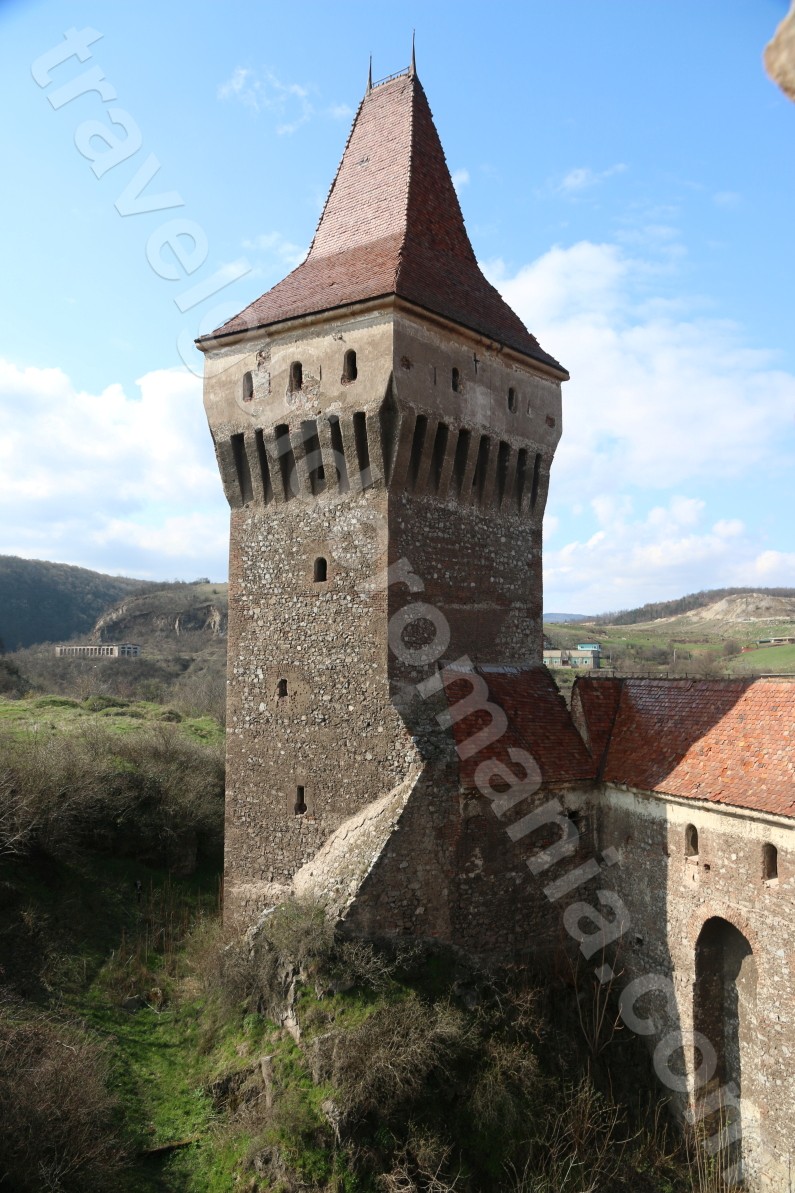 The administrative palace is located on the south side of the castle, and it is called also the Wing Zoliomy. Zoliomy Family had the castle in the second part of the century VII. 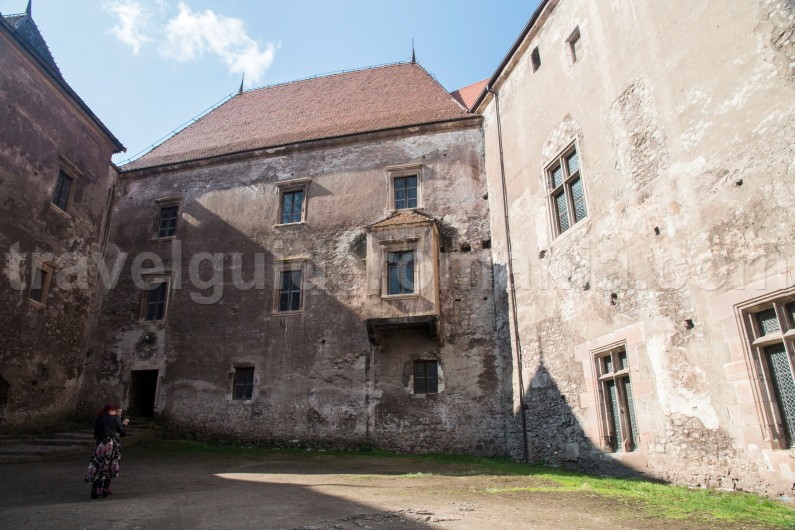 Next to the administrative palace is the Old Tower of Gate, build in the period of Iancu Of Hunedoara. At that time, the tour had 2 levels provided with battlements for defense.

The Fountain, they say it was dug by three Turkish prisoners. Iancu Of Hunedoara promised them to released them if they dig a fountain till they find water. After 15 years they got to depth of 28 m, where they found water. During this period Iancu died, and his wife decided to kill the prisoners. The last wish of those prisoners was that on fountains keys to be written: You have water, but you don’t have heart. 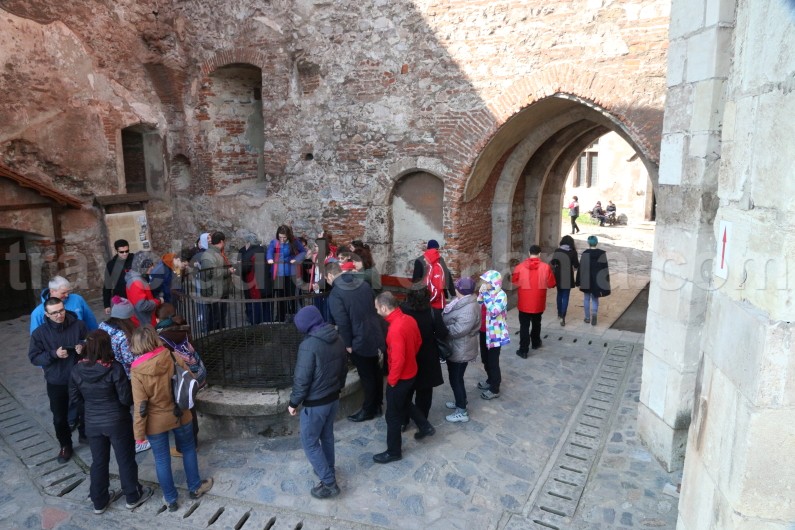 Bears’ Pitt is a space between the two interior walls of the castle which can be admired from above, from the Mountain Stronghold terrace. It seems that there wild animals were kept to which they would thrown the prisoners.

The tour of The Corvin Castle is ending on the terrace of artillery. This bastion was build with The white Tower, during the period of Gabriel Bethlem. It is possible that this open terrace not be ever used in warrior purpose. 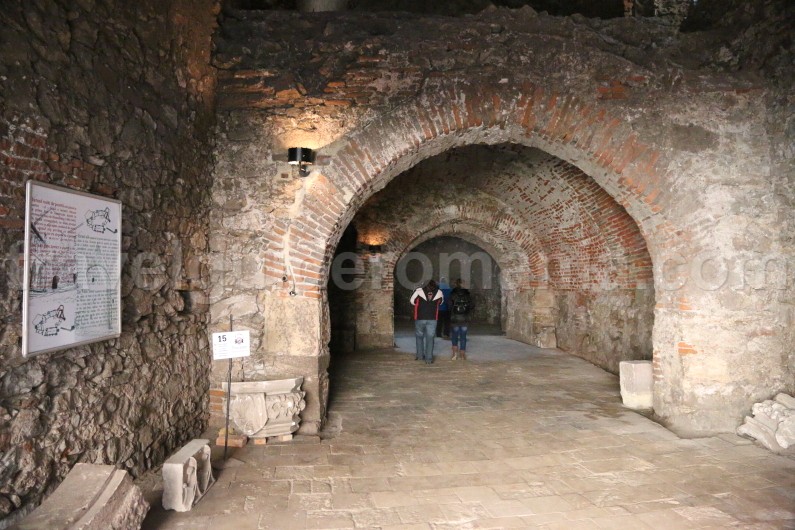 At the out of the tour castle you can visit the torture room. It was decorated by the castle custodians with the purpose to make the visit of the castle more interactive. 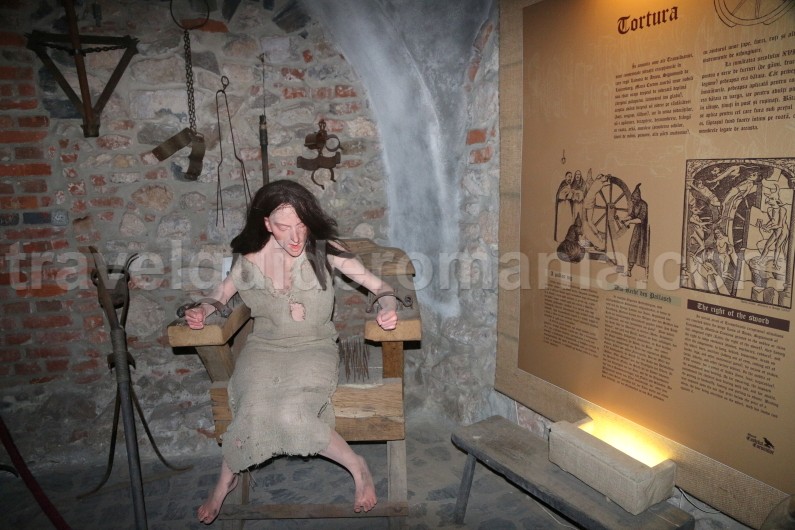