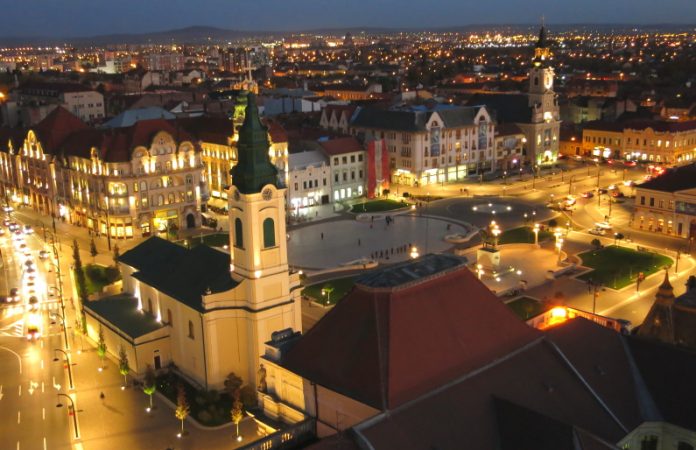 From the medieval architectural monument (The Citadel of Oradea), to one of the greatest baroque ensembles in Romania, going through dozens of palaces in the Art Nouveau style and churches of different denominations, Oradea is a unique architectural mixture in Romania.

Oradea, the city on the banks of the Crişul Repede River, located on the western border of the country, has been lately brought back to life from an architectural point of view, due to numerous investments. Thus, the city of Oradea has recently become a growing cultural tourist destination. The architectural style of Oradea is rich, due to its history of over 900 years and to its multiculturalism with Hungarian, Jewish, German and Italian influences.

We suggest you a tour of Oradea starting from The Citadel of Oradea (Cetatea Oradea) and ending at the Central Station.

Length: about 10 km round trip.

For those who come by car, they can leave it near the citadel, in the car park. It is near the main access road in the city, DN1 Cluj-Napoca-Oradea.

The route begins with the symbol of Oradea, the Citadel of Oradea (1), a place where the history of the city was written. 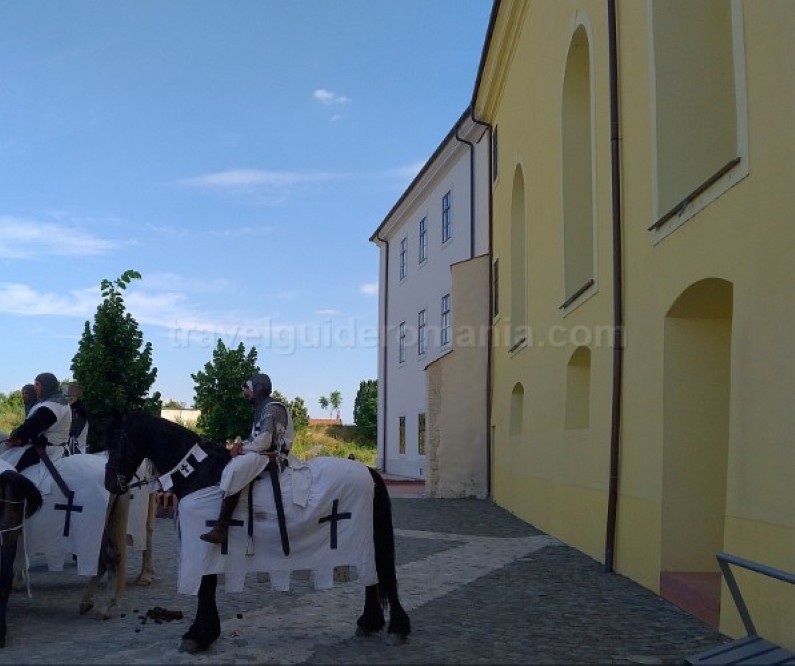 In the citadel, at the Tourist Information Office, there are free maps and tourist information brochures. Here you can purchase a city card, but you can also get it at the kiosks of the local transport company (OTL). The card includes free public transport for 48 hours, a coupon book with discounts at the main attractions of the city and numerous restaurants/bars and a tourist map. For detailed information about all historical buildings, as well as for a tourist map and other thematic tourist routes click here. 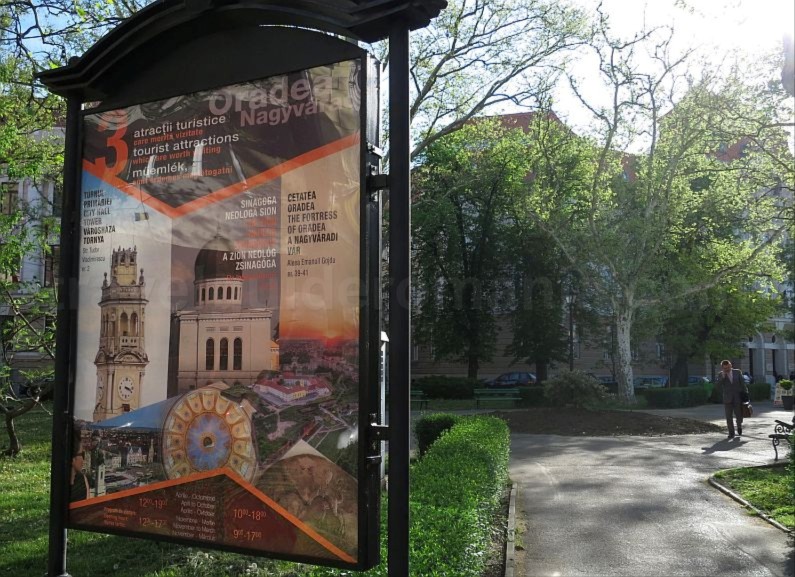 Crossing the wooden bridge, from the main entrance of the citadel you can see the 1st December Park (Parcul 1 Decembrie) (2). It houses the former Trade Unions’ House of Culture (Casa de Cultură a Sindicatelor) and connects the Citadel of Oradea with the Old City Centre. At the beginning of the 20th century here was the large square of the city, the place where the Cattle Fair was held once a week. To the left of the park, an imposing building attracts the eyes: it is the Ullmann Palace (3), a monument representative of the Jewish community of Oradea. 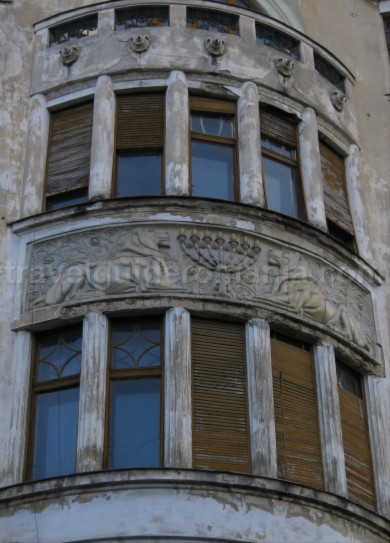 Not far from it, secluded on a side street, is the Orthodox Synagogue Hevra Sas (4), a historical monument of Jewish worship, built in 1890 in an eclectic style. 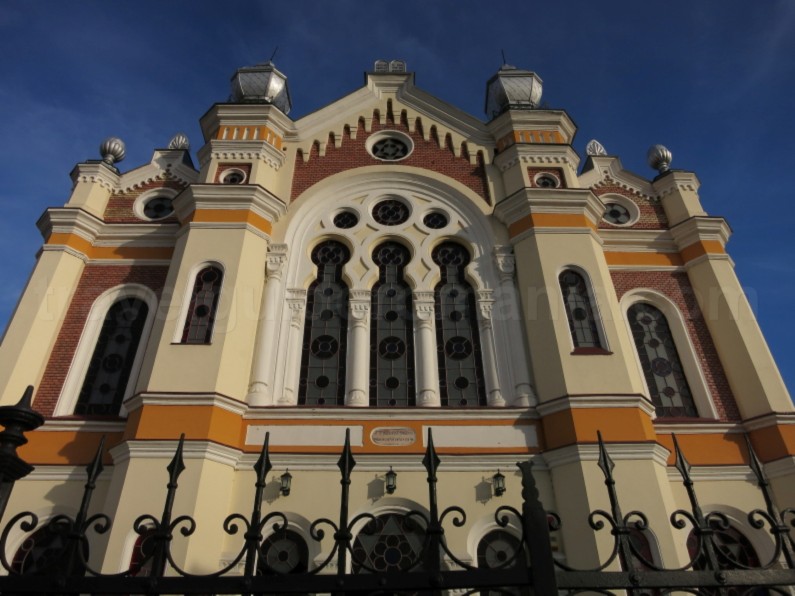 To the right of the park, the former Commercial Hall, today the Faculty of Medicine and Pharmacy (5), built between 1893 and 1894, imposes itself by massiveness and an impressive dome. 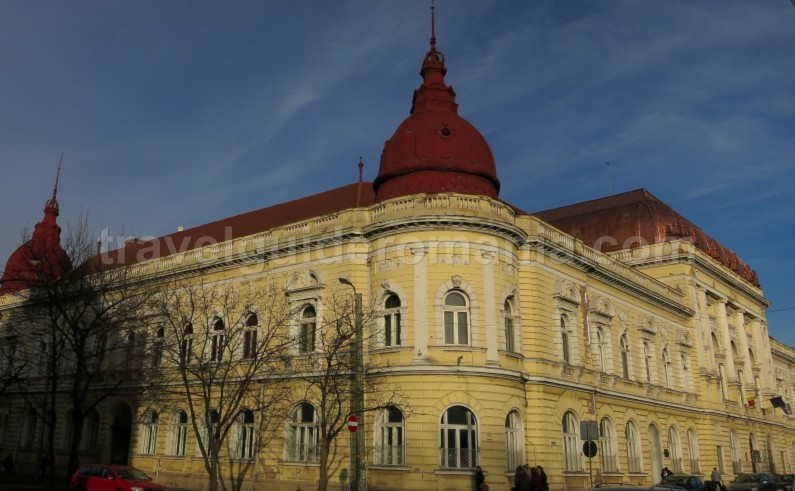 A new pedestrian street, Vasile Alecsandri Street (6) connects the former Big Square and the former Small Square, today Unirii Square. Along this new square, you can admire the newly renovated secession-style buildings. Among them the former glassware store stands out, with its floral decorations and the dark blue colour of the facade. 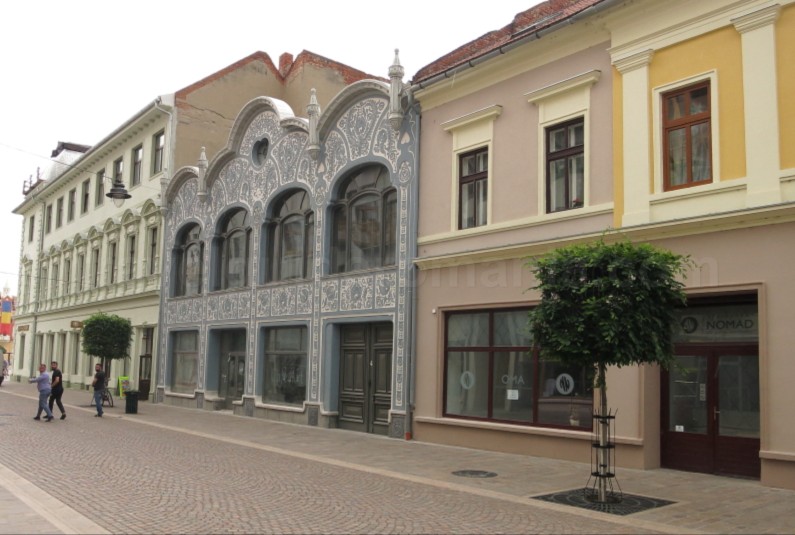 From Vasile Alecsandri Street you can also enter through one of the 3 entrances of the Black Eagle Passage (Pasajul Vulturul Negru) (7). The pedestrian alley is covered with a glass dome, with curved lines, which gives lightness to the alley. The Vittorio Emanuele Gallery in Milan was the inspiration for these special alleys, the main attraction of Oradea.

Its tortuous alleys lead you either to the Unirii Square or to the Independence Street, parallel to Vasile Alecsandri. We recommend you to exit to the Independence Street and take a short visit to the Sion Neolog Synagogue (Sinagoga Neologă Sion) (8). Built by the reformist Jews of Oradea in 1878, the synagogue has a monumental facade created by the four pilasters located in the corners of the building. The synagogue is the third largest in Europe. Nowadays it shelters cultural events (exhibitions, concerts, etc.). 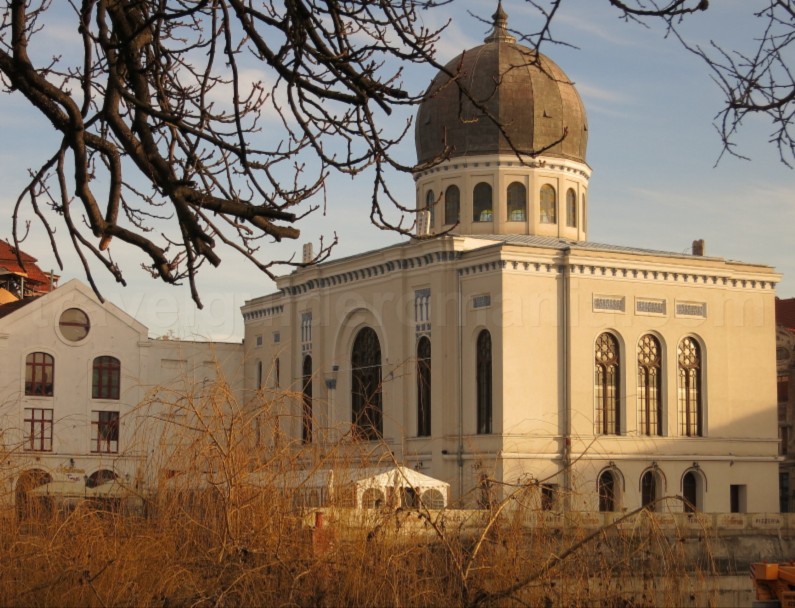 The alley from the Black Eagle Passage which leads you to the Unirii Square passes under one of the symbols of Oradea, a stained glass representing a black eagle (9). Hence the name of the palace – the Black Eagle Palace. 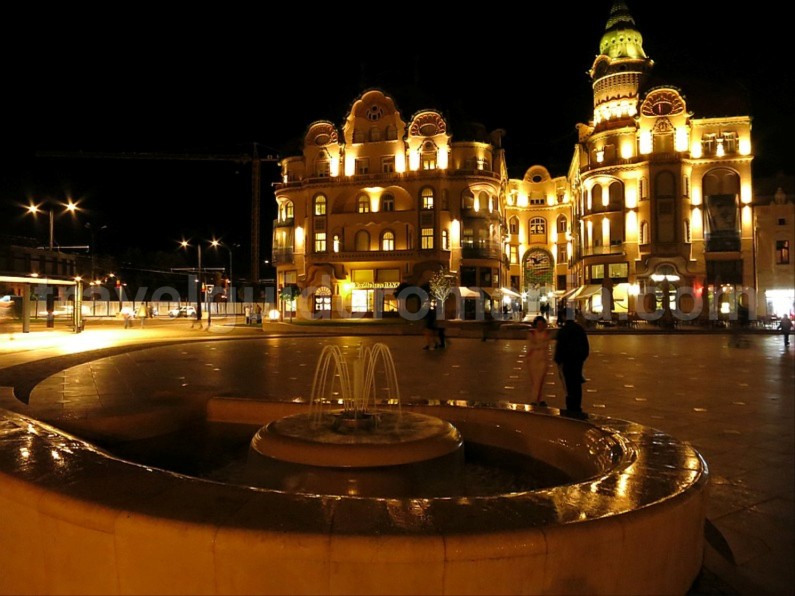 The Moon Church (11) got its name from the moon-shaped sphere, with a diameter of 3m, half black, half gold, located in the church tower. The mechanism installed in 1793 indicates the lunar phases.

Tip: Take a detour to the Greek-Catholic Church “St. Hierarch Nicolae” (12) from Unirii Square to admire the building of the Greek-Catholic High School “Iuliu Maniu”. It was built in 1925, in neo-Romanian style (late version of Neo Wallachia Renaissance style).

The impressive building of the City Hall in neoclassical style attracts especially with its Clock Tower (Turnul Primariei) (13). The 50-metre tall tower with its 4 levels offers the widest panoramas of the city. It is worth a visit, despite the 250 stairs that you have to climb. Here, at the beginning of the 20th century a point of fire observation was located. The fires in the city were announced by bell ringing.

Before you cross the Crișul Repede River over the Saint Ladislau Bridge (14), your eyes will be drawn to the impressive dome of the Sion Neolog Synagogue.

Once you crossed it, a new triangle-shaped square, the Ferdinand Square connects with the city’s longest pedestrian street, the Corso.

Among them the building of the Theatre “Regina Maria” (16) occupies a central place. Built in only 15 months (July 1899- October 1900) the theatre building represents one of the top achievements of the eclectic style in Oradea. The two statues that frame its entrance represent the two protective muses of theatrical art: tragedy (Melpomene) and comedy (Thalia).

Next to the theatre, after the Hotel Astoria are the Adorján Houses waiting to be renovated. At the beginning of the Corso (Calea Republicii) (17) there is also the former Rimanoczy Hotel. Currently, on the ground floor of the building waiting to be renovated you can find the Golden Barrel Restaurant and a summer garden. 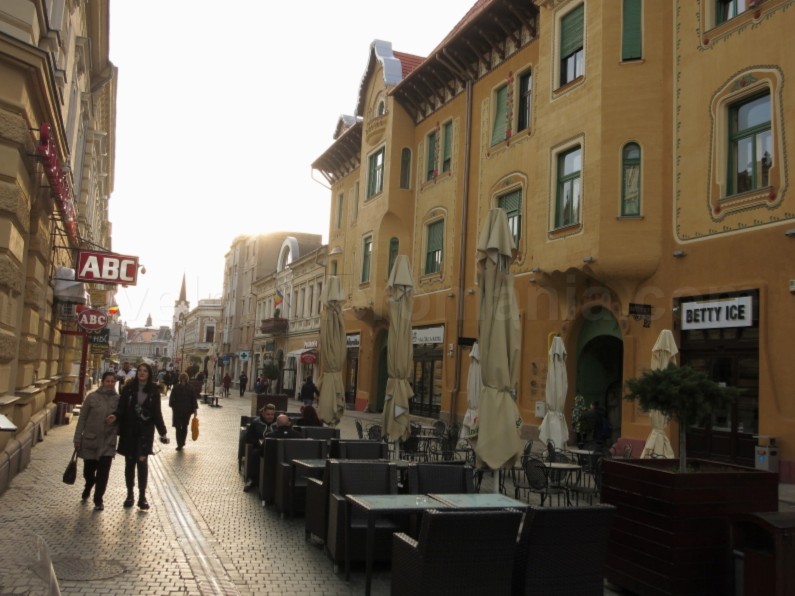 Walking along the pedestrian street you will realize that there is a reason for calling Oradea the capital of the Romanian Art Nouveau. Oradea is the only city in Romania that is part of the European network of Art Nouveau cities.

Near the end of the pedestrian street a building worth noticing is the former Ursuline Monastery and the church “Saint Ana” (18) which is a High School nowadays, the “Ady Endre” High School.

The Rimanóczy Kálmán senior Palace (19), built in 1905, is a simplified and smaller-scale replica of the famous Venetian palace Cá d’oro (the Golden House). The palace built in an eclectic style with gothic elements is also known as The Venetian House.

The Moskovitz – Miksa Palaces (20), the Stern Palace (21), and the Apollo Palace (22) will surely attract your attention, three buildings representative of The Art Nouveau architectural heritage of the city. You will admire the rich vegetable motifs, the curved shapes, the statues, the textile-folk motifs, the balcony hardware, a collection of symbols like the Mercury’s sceptre, a hand and an anvil, the compass etc. These architectural jewels are highlighted at night when the lights go on.

From the pedestrian street you can follow some side streets, either on the left or on the right side. Worth visiting are on the left: the Palace of Justice, the Headquarters of the National Bank and the Bar Building. On the right side the Rimanoczy Jr. Palace, currently, the Orthodox Diocese Palace, The Post Office Palace, etc. 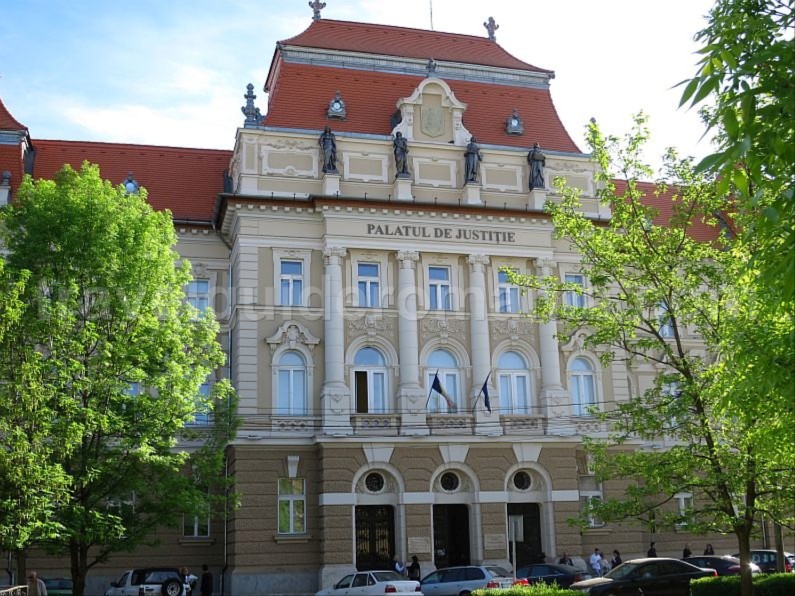 At the end of the pedestrian street, at the entrance from General Magheru Street you can see, on the right-the Misericordia Complex, the former Palace of Finance (23) (currently under renovation) and on the left-the Roman Catholic Church “The Holy Spirit” (24). For a better view of the dome of the Chapel in the Misericordia Complex go on the Snagovului Street, located perpendicular to the pedestrian street. 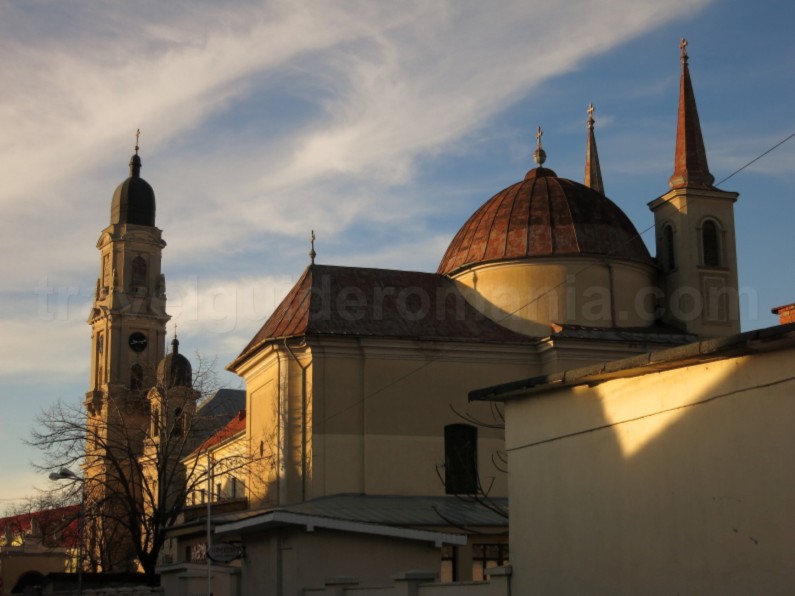 After the Crişul Shopping Mall, going on the street leading to the Central Station, turn left, to arrive at the Petofi Sandor Park. At the end of it, you arrive at one of the most iconic baroque architectural ensembles in Romania. It consists of the Baroque Palace (25), the Roman Catholic Cathedral (26) and the Canonical Arcades (27). The Baroque palace, with its 282 windows, was built between 1761 and 1777. The Roman Catholic cathedral has an organ, still functional, dating back to 1780, donated by the Empress Maria Theresa. The ensemble lies within a tree park with species of magnolia, common yew and oak, as well as three over one hundred old Sequoia Gigantaea. The Canonical Arcades consists of 10 aligned buildings as if supported by the 57 arches.

From here, along the Children’s Palace (28), another eclectic-style monument, you can reach the Central Station (29) in a few minutes, a building with architectural interest as well.

From the train station you have two options to return to The Citadel of Oradea: either on the same route or you can shorten the walk, bypassing the city centre. Follow the Republic Street up to the Crişul Shopping Mall and further, on the General Magheru Street crossing the Crișul Repede River over the Dacia Bridge.

In the second version, if you feel the need for some moments of relaxation, you can walk through a green oasis in the middle of the city: the Liberty Park (30). Being on the right bank of the Crisul Repede River, start from the Dacia Bridge, until you get to the facade from the courtyard of the House Darvas – La Roche (31) or even to the Levay Palace.

In the park that stretches along the Crisul Repede you can walk among the old chestnut trees or relax on the benches on the banks of the river. The only pedestrian bridge over Crişul Repede is located here, The Intellectuals’ Bridge (32). The bridge connects the Liberty Park to the 1st December Park and offers a unique angle on the Oradea City Hall. 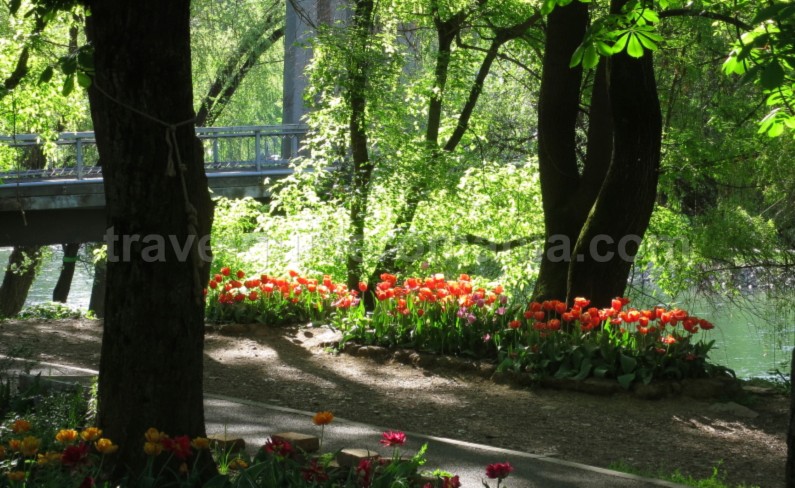 From the Dacia Bridge you can get to another park of the city, the Bălcescu Park. Next to it there is one of the largest aqua parks in Transylvania, the Aquapark Nymphea. Here or in the well-known balneal-climatic resort Baile Felix (12km from Oradea) you can end a city-break in one of the most diverse cities from the architectural point of view in Romania, the city of Oradea. 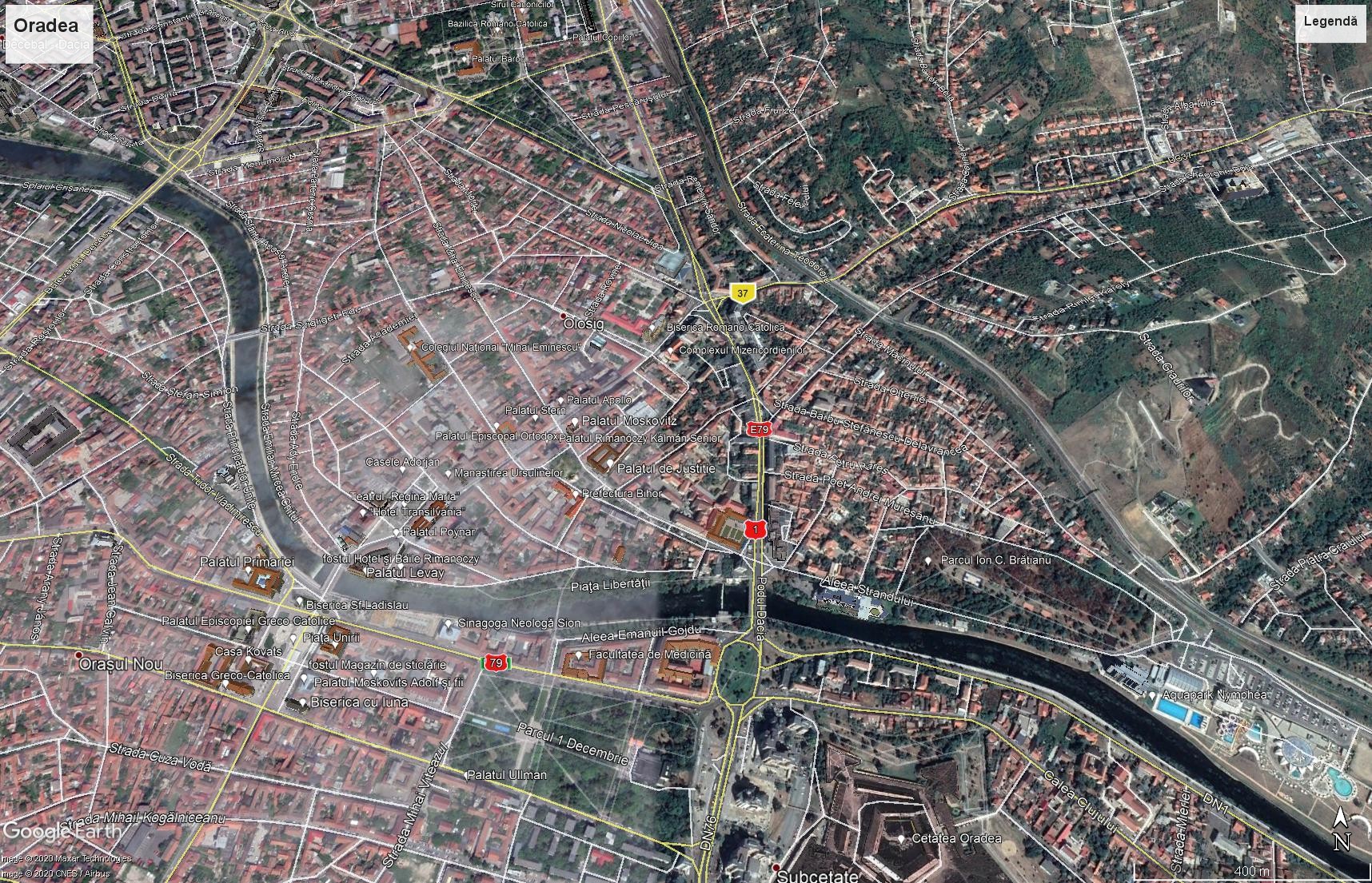