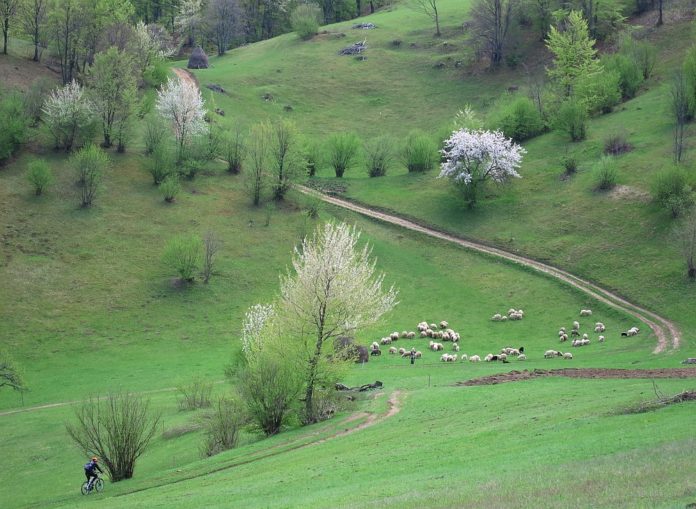 The surroundings of the village of Ponoara are one of the most picturesque areas in Padurea Craiului.

The area we suggest goes from the valleys of Bratcuta, Iadului and Crisul Repede Rivers. There is also a series of ridges going up to 968 m (Botii Hill) that close a large karst depression, of approximately 10 km². It is here that you can see the village of Ponoara.

It is a mountain village that goes from the altitude of 600 m up to 800 m. Founded in 1544, its houses are scattered all around the depression. You will see groups of houses either on a top of a hill or in an isolated glade, among sinkholes.

Many forest and cart roads that link the houses with the surrounding lands facilitate the access by bike to isolated and very picturesque areas.

The mountain bike trail we suggest goes through the specific rural landscape in the Apuseni Mountains. You will encounter here the villagers’ households and haystacks. The trail goes near the houses of a small hamlet or winds through the sinkholes of different length and width.

The trail is not marked.

We recommend you to make the trail during spring or autumn, when the colours will enchant you and the temperatures are very friendly with bikers.

At around 1.5 km from the station, the trail leaves the road that goes to Damis, going up on the left on a short asphalted road. At the end of the road there is a spring, one of the few springs on the trail, most of them being at the end of the trail. You can also take water from the villagers, throughout the trail. At the end of Bratca, the forest road climbs a lot; there is almost a 200 m elevation gain, on the ridge of the left mountainside of the Bratcuta Valley.

Soon, you will intersect with the red marked trail that makes a foot circuit (9.5 km) downstream the area of the Boiului Valley Basin.

We recommend here a detour, going left for around 1.2 km to the viewpoint on the rocks that guard the Boiului Valley.

You have here a large viewpoint over the Crisul Repede River and the depths of the Boiului Valley. Nearby, you can find a deviation of the trail, marked with double point towards the Fugarilor Cave (the Runaway Cave), a small cave hidden in the rock wall. The detour can be made only by foot, in around 30 minutes, a return trip.

The circuit of the Boiului valley has another point of interest, the Boiului Waterfall. You can reach it by bike only if in Bratca you follow the asphalted road towards Lorau for about 2 km and then another 2 km on the Boiului valley, until the forest road becomes a path. From that point, there are still 300 m until the 7 m waterfall.

Returning to the bike trail on the ridge, the road goes by scattered houses, continuing to gently go up.

After you make a detour around a large sinkhole and pass through a small corridor through the forest and junipers you will come out upstream the karst depression Ponoara.

The panoramas are larger as you reach the eastern end of the ridge. Here you will find one of the few barns with a straw roof in Padurea Craiului.

Next, there is a short but rather steep descending, of around 150 m elevation gain, nearby the houses of the hamlet Codobanesti until the waters of Boiului Valley.

In order to enter upstream the Ponoara depression you have to take the road on the right, being on the descending road, road that will lead you to the pastures with sinkholes and lots of flowers during summertime.

From the water of the Boiului Valley, the road slightly goes up to the asphalted road of Lorau- Ponoara. You have here the possibility to quit the trail and to go to the village of Lorau.

If you wish to shorten the trail: from the centre of the village you go up straight towards the Ponorului Ridge. The ridge guards the village of Ponoara as a castle wall, dividing the depression and the basin of the Iadului Valley.

For those who want to continue discovering other picturesque corners of the karst depression Ponoara we recommend to keep going through the northern area of the depression. The trail twists and turns in short ups and downs among isolated houses and sinkholes.

Once you reach the bare ridge of Ponor you will pedal at first in parallel with the Iadului Valley. You will reach the highest altitude of the trail, 950 m under the Botii Hill and then you will enter the basin of the Bratcuta Valley.

After 10 km of ridge you arrive at a place named “La Butoaie” (At the Barrels) with a few summer houses. The name comes from the very big barrels that were transformed into holiday houses.

Below these houses, southwards, there is a spring. From this saddle you begin the descent back to Bratca, approximately 13 km, following the forest road on the Bratcuta Valley.