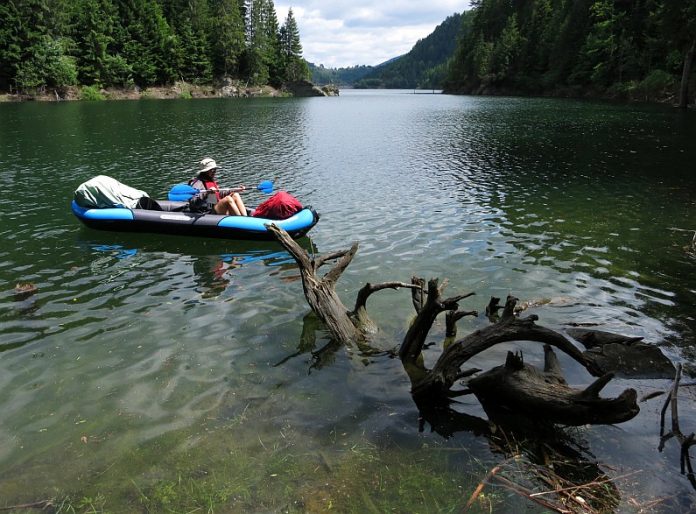 Drăgan Reservoir is located in the valley of the same name in Cluj County. It has an area of almost 300 hectares. The dam, with a height of 120 meters, is spectacular. It is a concrete arch-like construction, similar to the Vidraru Dam in the Fagaras Mountains. The lake, located at an altitude of about 830 m, is surrounded by a coniferous forest. A forest road completely surrounds the lake, through the forest. The absence of settlements and buildings on the shore, make Drăgan Reservoir an oasis of tranquility.

Access can be made on two variants from DN 1

– the most direct one, following the Drăgan Valley through the villages of Valea Drăganului-Lunca Vișagului – about 23 km. The entrance into the valley is made between the villages of Poieni and Ciucea. You can also find here the CFR Valea Drăganului Halt (CFR is the National Railway Transport Company). Currently the crossing over the Crișul Repede River is made over a temporary bridge, on one lane, the old concrete bridge being destroyed after a flash flood.

– the longer but more picturesque version – 35 km, starts from Bucea and follows the Iad Valley through the localities of Bulz-Munteni, up to Remeți. Here the road leaves the Valley and climbs to the right side of the valley crossing a secondary peak of the Vlădeasa Mountains. The road has been recently re-paved, offering the possibility of panoramas over Drăgan Reservoir. A first panorama of the lake and the surrounding area, including the Vlădeasa Peak, can be seen if you deviate about 600 m from the highest saddle. The boundary between Cluj and Bihor counties is also located here.

Follow the cobbled road on the right, for about 300 m, then turn towards the top of the hill. On the way down to the lake, near Hotel Art 1000, you have another viewpoint over the lake and the Buteasa Peak that guards the lake. You can also see here some buildings of the former temporary settlement Florești, where the builders of the dam used to live.

400 m below the hotel, before a curve, a narrow, paved road comes off to the right. It follows one of the two arms of Drăgan Reservoir, the one on the Sebeşel Valley. The asphalt ends after about 4km. You still have about 1 km up to the place where you can launch the kayak, from the end of the lake. The approximately 200m from the road to the lakeside is difficult to travel if you have a sedan. During summer, there is also a campsite here. This is the spot where you can easily launch your kayak.

You can paddle to the dam Drăgan (about 3.5 km) and to the small holiday village Alunu (another 1 km). Located in a small bay of the lake, Alunu is the only settlement on the shore of Drăgan Reservoir. Although it’s not the best place to get out of the kayak, due to the steep slope, the place has a special charm, being isolated and picturesque.

Besides, there are no other places to go to shore, the banks are steep and wooded. If you want to continue to the end of the lake, on the main arm, you still have to go on for 5 km.

On the Iadului Valley, upstream from Remeți there is another large reservoir, Leșu Reservoir. Unfortunately it has been emptied for several years due to problems at the dam.

The largest lake is Beliș – Fântânele with an area of 480 ha. The dam has a height of 92 m. Beliș-Fântânele Reservoir is located at an altitude of 990 m and is surrounded by coniferous forest.

It has two arms, the main arm on Someşul Cald Valley is about 15 km, from Smida village to the dam. The second arm of about 6 km is on the Beliș Valley and it springs from under the Bătrâna Peak, near the Călineasa Glade. On the bank of the lake, near the dam, there is the tourist resort of local interest Beliș-Fântânele. Around the lake there are summer houses, especially near the villages of Beliș, Bălcești, Dealu Botii, Smida and Giurcuța de Sus. The construction of this dam led to the disappearance and displacement of the inhabitants of some hamlets, such as Milioan, Pleș, Dădești, Bolojești or Giurcuța de Jos. Only when the level of the lake is very low you can see the ruins of the houses as well as the ruins of the former church in Giurcuța de Jos.

– from DN1, the access can be made on paved roads from several directions

* from Bologa via Săcuieu – Scrind-Frăsinet – Răchițele – Pasul Prislop – Doda Pilii – Smida (end of the lake) – 43 km. From Doda Pilii to the hamlet of Smida there are 2 km of unpaved road. If you want to reach Giurcuța de Sus you have to travel about 9 km from Doda Pilii, on a rather bad road. This road continues for a few more kilometers around the lake, but it’s very bad.

From the asphalt road that passes through the villages of Beliș-Bălcești-Dealu Botii-Răchitele (18 km) there are possibilities to reach the lake from the north. At the same time from this road you can see the lake, one of the few lookout points around the lake.

Tarnița Reservoir is located on the Valley of Someșul Cald upstream from the Gilău and Someșul Cald Reservoirs. The lake lies at an altitude of 520 m and is surrounded by deciduous forest. The lake has an area of approx. 215 ha and a main arm with a length of about 8 km. The Tarnița Dam is an arch dam with a height of 97 m. You can rent kayaks, yawls and paddleboards at Yachting Club Tarnița. Every year there is a swimming contest here: Crossing Tarnița.

The lake is also interesting for hikers, marked trails provide access to some of the most photogenic belvederes in the country. The two lookout points are Piatra lui Lucaci and Piatra Lui Dan (or Piatra Corbilor). Near the dam there is a Mountain Rescue Base. On the northern bank of the lake there is a blue marked trail from Tarnița dam to the end of the Tarnița Reservoir. From this trail, a circuit trial (red dot marking) splits off to one of the belvedere points – Piatra Lui Lucaci. Access to the Piatra lui Dan belvedere point is done following the yellow dot marking near the dam.

– from DN1 Gilău – Tarnița Dam-10km. To the end of the lake, one of the few places where you can launch the kayak, there are 10 km on asphalt road and about 600 m on unpaved road.