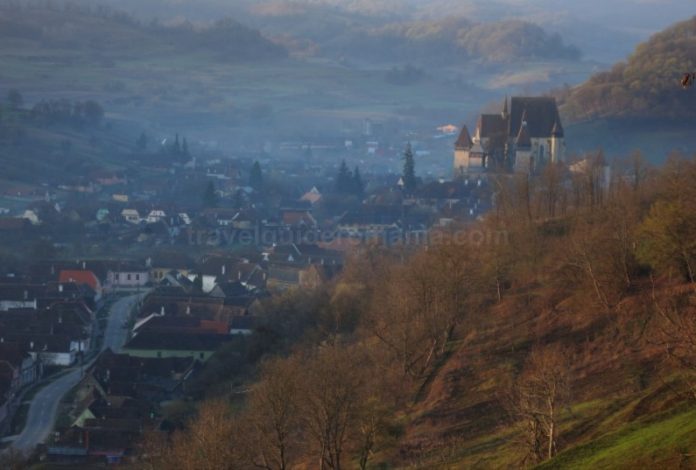 Of the more than 160 fortified churches in Transylvania, Biertan Fortified Church is one of the best preserved and impressive in size.

Biertan is one of the most beautiful villages in Romania, conserving a medieval touch.

In 1993, a part of the village, the area with the old traditional houses, built in the baroque style, along the fortress-church, has been included on the list of monuments of UNESCO World Heritage. 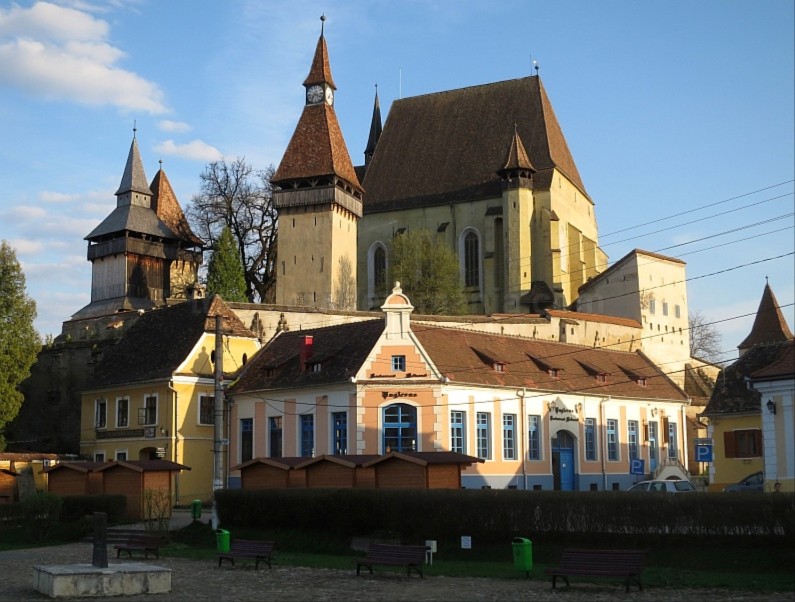 Biertan is one of the first Transylvanian Saxons settlements in Ardeal. The village of Biertan is documentary attested in 1283, along Mediaş and Moşna.

Historically, Biertan was always in a fierce competition for obtaining the administrative center of the “Two Seats”, the Seat of Seica and the Seat of Medias. A “chair” represented a union of several towns and villages, subject to the same court power. In order to get this chair, each locality intended to raise a building as impressive as possible.

In 1397 Biertan is named fair for the first time in a document. As a result, the houses were arranged around the central square, in which there was the fortified church. Biertan is one of the most powerful peasant fortresses in Transylvania. 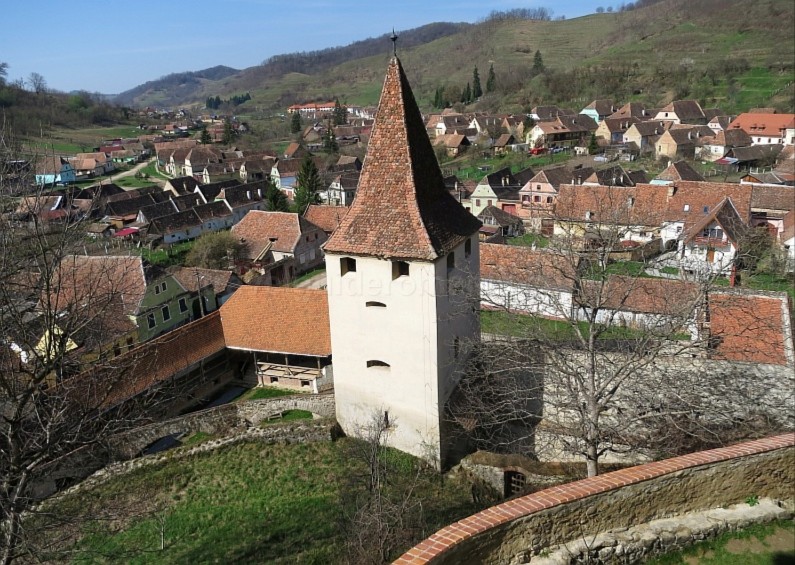 At the beginning of the 16th century there were 19 guilds which included 25 trades. Biertan became an agricultural and wine-growing centre.

Dr. Georg Paul Binder combined the theological knowledge with the science. He wrote: It is no possible to impose oneself as an evangelical clergyman, without science.The science of religion must bring light to the priests, and the religious feeling, warmth. 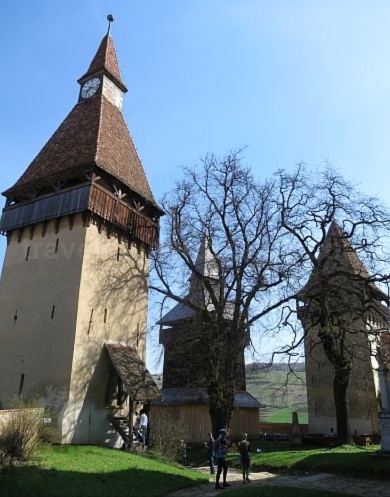 The immigration of the Transylvanian Saxons from Romania:

Tourism in Biertan, in nowadays: 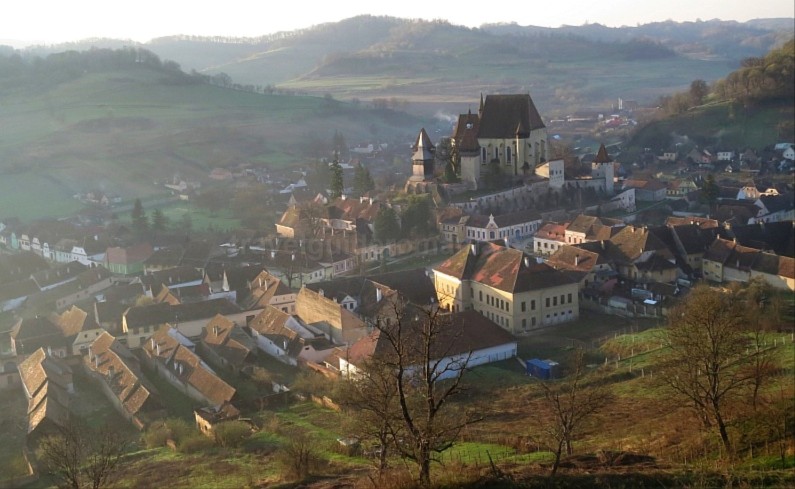 Sitting atop the hill, first of all, we see the church-fortress of Biertan. It was built around the year 1500 in late gothic style, on the foundations of a Roman ancient building. The Biertan fortified church, dedicated to St. Mary, underwent more extensive restorations between 1938-1943, then between 1980-1990. These were possible due to the donations made by the natives of Biertan, spread across the world. In 1991, the village makes the first written proposal for the monument to enter the UNESCO list, thing that will be done in 1993. 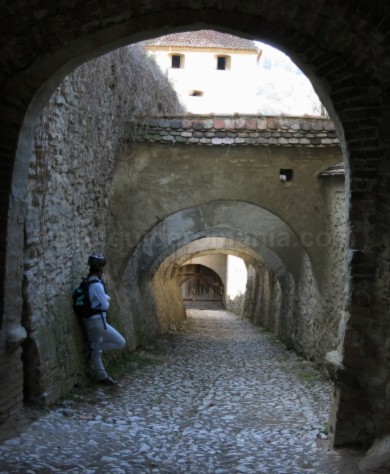 Biertan fortified Church is a real fortress, with 3 rows of defensive walls (one partially), 3 bastions and 6 defence towers, built in different stages.

The first wall of the fortress has four towers and a bastion. 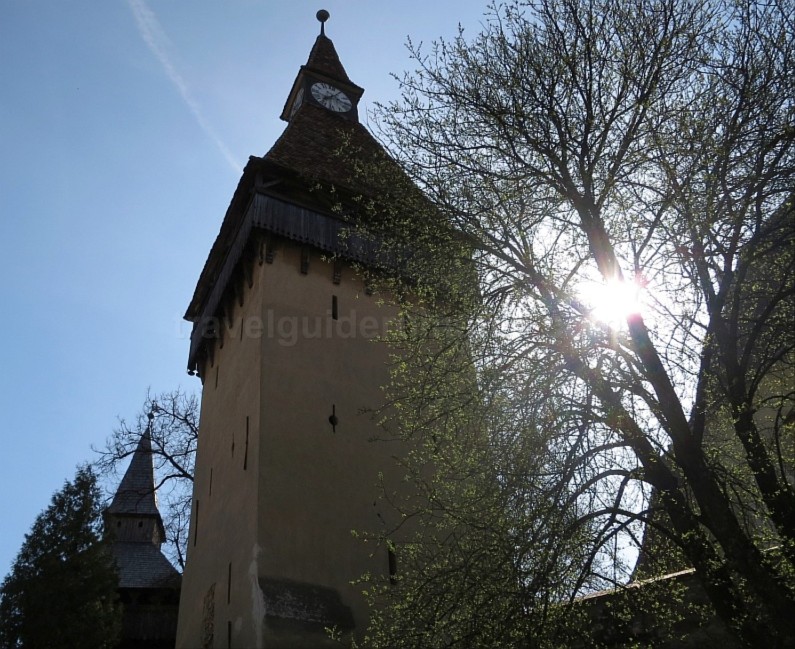 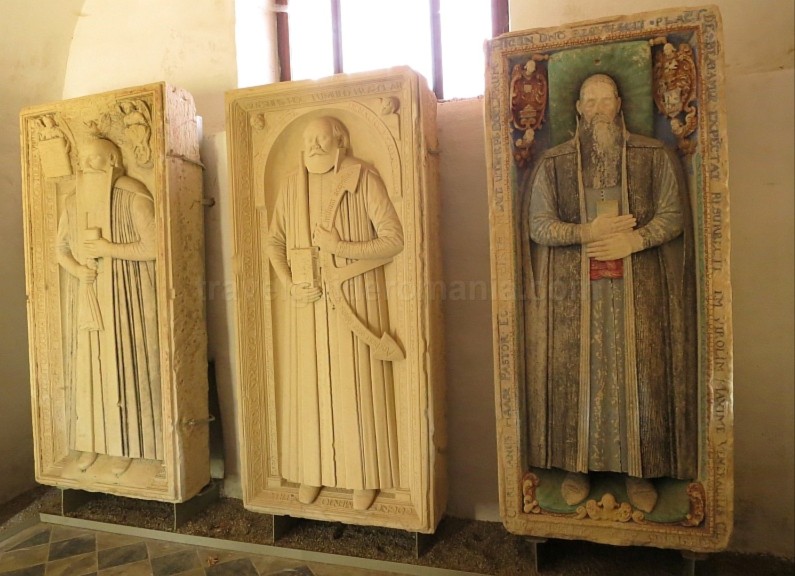 Between the mausoleum tower and the catholic tower there is the east bastion known as the matrimonial prison.

Here, in a small room called the hole, the spouses who intended to separate were closed together for a period of time. It seems like they where having at their disposal a single plate, a single spoon, a single cup and also a single bed. It is said that during the 300 years that the “matrimonial prison” existed, only one couple divorced. Currently it is a museum. 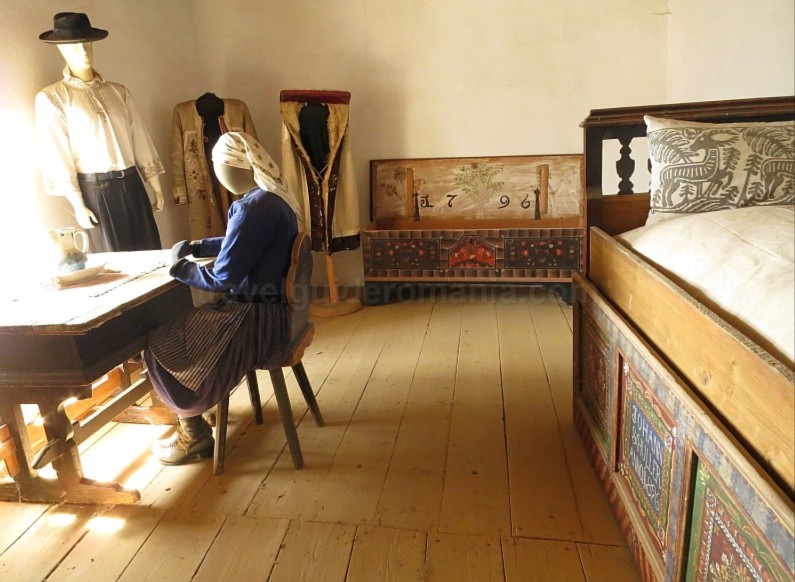 The second wall, of 7-8 m in height, delimits two inner courtyards. Here the community used to bring their animals in case of danger. 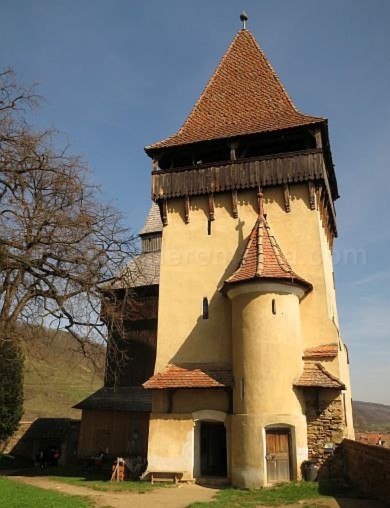 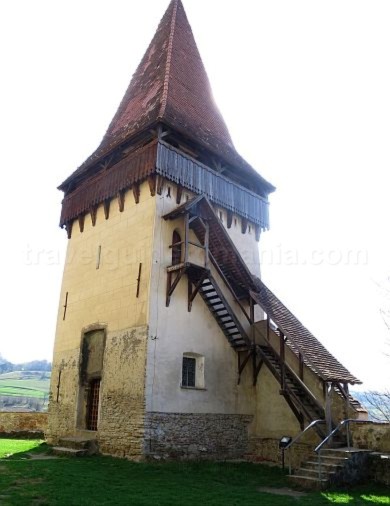 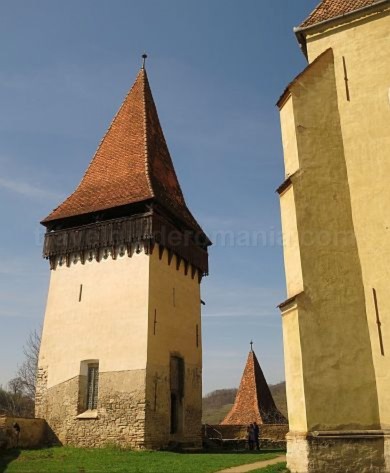 The access inside the fortress, towards the church, is made through a 100 m long covered ladder, dating from 1795.

It starts from the central square of the village, next to the guard tower. At the end of the ladder, in front of the church there lies a large stone. Here, on Sundays, those who did not comply with the rules were seated in order to be seen by the whole community.

The hall-like church was built in late Gothic style. Has three naves, with a vault supported by three pairs of octagonal pillars. 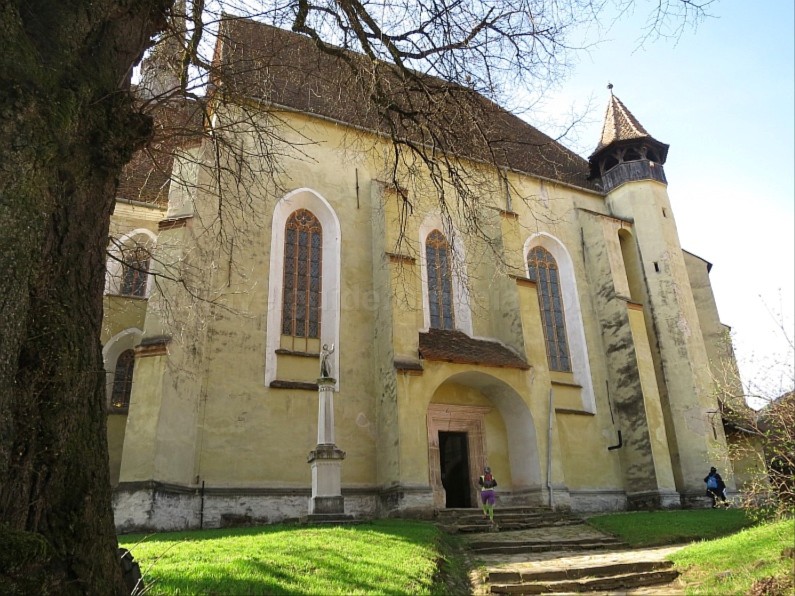 An inscription dated 1522, on the arch of triumph of the choir tells us that the erection of this building was done in the time of the priest Baccalaureus Johannes seconded by his nephew, the Magister Lucas.

The key activates four mechanisms and the crank another fifteen. The lock blocks the door in 13 points, so that the goods of the church may be kept safely in the sacristy.

Most noteworthy is that the lock was awarded at the World Exhibition of 1900 in Paris. 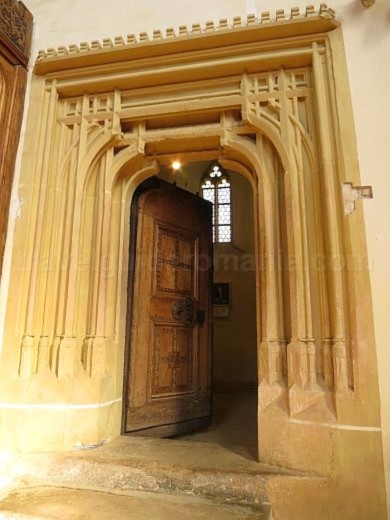 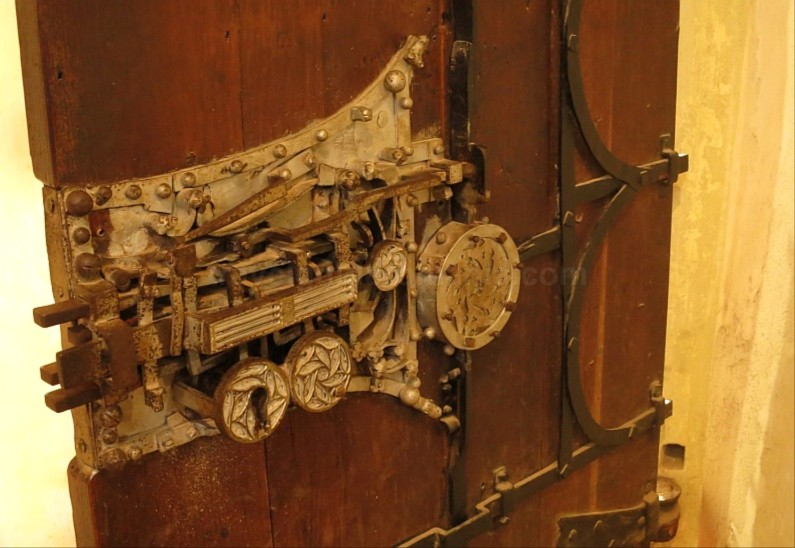 The altar of the church, one of the most imposing in Transylvania, contains 28 painted panels. They are representing scenes from the life of Jesus and Mary. It was made by craftsmen from Vienna and Nürnberg between 1483 and 1513. 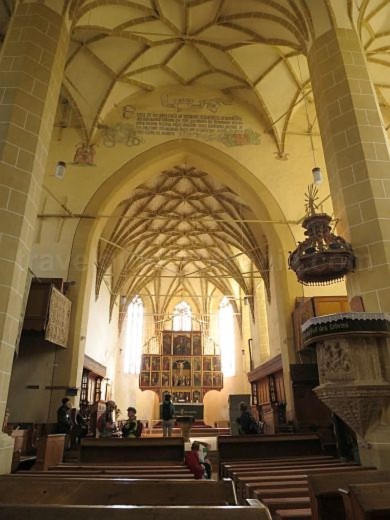 Dating from 1523, the pulpit, consists of a single piece of stone having at the base an upside-down pyramid and is adorned with scenes in relief.

The wooden linden pews were made between 1514 –1523. The pews on the right were intended for those of higher rank (priests, bishops) while those to the left for the committee of the church. 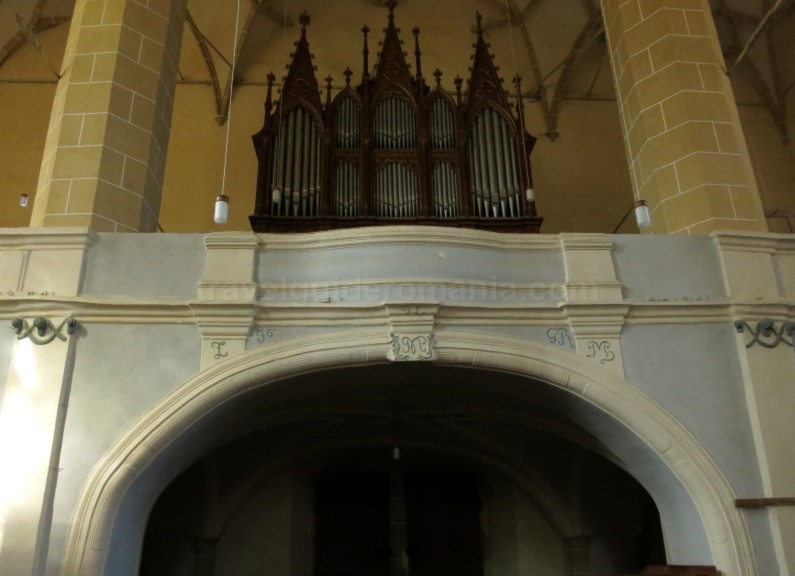 Inside the church there are a few of the flags of the local guilds. You can see the flag of the wool weavers (the oldest-1691), of the tailors (1792), of the tanners (1802), of the wheelwrights, but also of the shoemakers and the furriers.

An interesting appearance on the vault of the church is that of a harlequin that seems to support the ceiling. You will hear several legends related to its appearance inside the church. 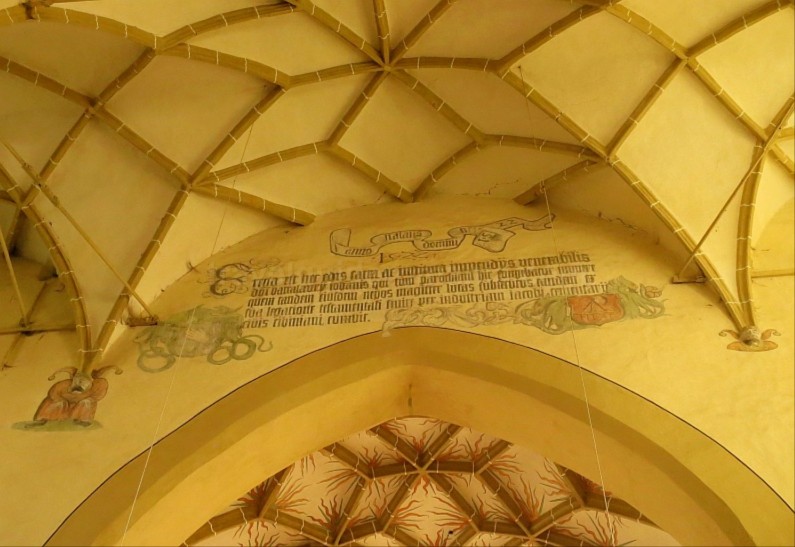 How to get to Biertan:

During the service, the visit inside the church is not allowed.

The entrance fee is 10 lei, which includes the guide.