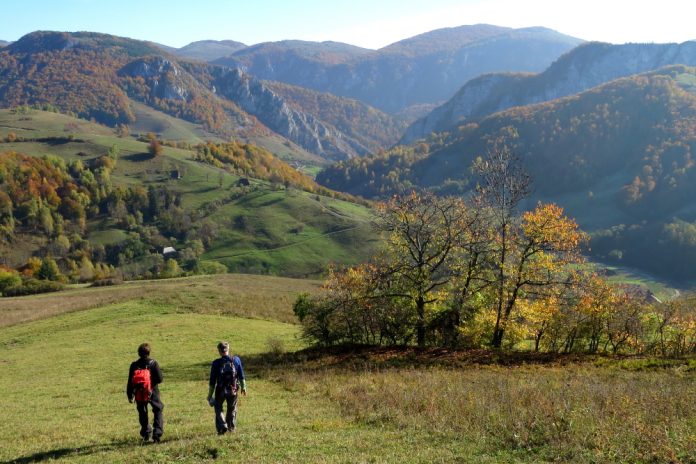 Trascau Mountains are among the most picturesque mountains in Romania, a result of the synergy between mountain civilization and wild nature.

Trascau Mountains are located in the southeast of the Apuseni Mountains and cover an area of about 1200 km sq. They are bounded by the Gilău-Muntele Mare Mountains, the Metaliferi Mountains, the Ampoiului Valley and the Transylvania Plateau.

Although the highest altitude reaches only 1369 m, at the Dâmbău Peak, the Trascău Mountains seem higher. That is due to the elevation gains that exceed even 1000 m, as well as the numerous cliffs that border them. You will find here the largest number of gorges in the Apuseni Mountains, no less than 22 gorges and 2 canyons. The most famous, from a tourist point of view, are: Turzii Gorge, Râmeţului Gorge, Întregalde Gorge, etc.

Two Natura 2000 sites overlap in the Trascau Mountains: a site of Community importance – ROSCI0253 Trascău and the Special Avifauna Protection Area-ROSPA0087 Trascău Mountains. They cover an area of over 90,000 ha. They preserve 13 habitat types, 18 species of mammals, amphibians and invertebrates as well as 24 species of rare birds.

On the surface of the sites there are 35 reserves of national interest:

A central ridge – Bedeleu-Ciumerna, over 40 km long and 1-3km wide, crosses the Trascau from the Arieș Valley to the highest peak in the massif, the Dâmbău Peak – 1369 m. This limestone ridge is guarded by spectacular cliffs in places (such as the Bedeleului Steep Mountainside) and has karst plateaus riddled with sinkholes – Bedeleul and Ciumerna. It is crossed by valleys that form impressive gorges: the Râmeţului Gorge and the Întregalde Gorge.

The Arieș Valley forms, as well, portions of canyons, and separates the Bedeleu-Ciumerna Ridge from the Petreştilor Ridge to the north. The Petreştilor Ridge spreads out on 15 km. Although it reaches only 759 m, it is crossed by 3 gorges: Turului (Turenilor) Gorge, Turzii Gorge and Borzeşti Gorge. The well-known Turzii Gorge overshadows the picturesque gorges of Turului and Borzeşti.

The specific charm of Trascău is given by the harmonious synergy between the scattered hamlets on the mild ridges and the isolated limestone blocks, unexpectedly interrupted by steep gorges.

The number as well as the dimensions of the caves here are smaller than those from the well-known Padiș area. The most important and the longest cave in Trascău is Huda Lui Papară cave, from the Bedeleului Steep Mountainside. Speleological reserve, closed to tourists, class A-cave of exceptional value, Huda Lui Papară has a total length of 2022 m. Through the 35 m high and 4 m narrow entrance, the water gets out but it is lost 90 meters elevation gain higher, in the huge and well-known Vânătarea sinkhole. The large dell Vânătările Ponorului is a main tourist attraction in Trascău.

You will be surely drawn to the impressive limestone wall. On this wall, the Dâlbina Waterfall, also called the Vânătările Ponorului Waterfall, falls in steps on about 70 m. A wooden balcony facilitates the visibility of the waterfall that dissappears in the Dâlbina Cave, resurfacing in the Huda Lui Papară Cave.

At the bottom of the Vânătarea Dell, there is an 80 m deep ravine where 3 streams converge: Valea Poieni on which the waterfall is located, Valea Ponorului and Valea Seacă. The last 2 streams form short sectors of gorges.

The surroundings attract many photographers, the landscape being one of the most picturesque in the country due to the presence of haylofts that are scattered on the terraces once cultivated with cereals.

Another cave visited by tourists is Poarta Zmeilor Cave, also a speleological reserve. The cave is short, only 125 m. The main attraction is the stone bridge located about 15 m downstream from the entrance of the cave and the suspended balcony that offers a vast panorama of the Aries Valley. To reach the cave located in the Bedelului Steep Mountainside, take the marked tourist trail from Sălciua, passing by the Sipote Waterfall. This is under the Glade “La Şipote”.

The stream that forms the waterfall gets out at the base of the Bedeleului Steep Mountainside, at a distance of 100-200 m from the Glade. The Șipote Waterfall is the first of a series of waterfalls hidden in the forest that covers the slope that descends towards Arieș. At the confluence with Arieș, near the National Road DN 75, you can see, from the road, the last waterfall in the succession of waterfalls that descends 300 m elevation gain.

Other smaller waterfalls are located in the gorges of Borzești, of Plaiului, Siloșului, Tureni. You can reach them on marked tourist trails.

In the Cetii Gorge a series of waterfalls cross a canyon hidden from the eyes of the tourists. Only the last waterfall, of the 4 waterfalls, can be seen, coming on the path that splits from the marked trail. The glacial potholes formed by these waterfalls gave the name of “The Roman Baths of Cetea”. Another waterfall is located in the Pravului Gorge, accessible following the valley from downstream, from the Botani Hamlet.

The area of Trascau Mountains has been inhabited since prehistory; Dacian vestiges have been discovered on the terraces of the rocky massif Piatra Craivii. The Dacian Fortress Apoulon was conquered by the Romans, and then in the feudal era, in the 13th century a feudal castle was built over it. The villages in Trascău Basin – Rimetea, Vălișoara, Izvoarele, Colțești are old settlements recognized for iron mining. The unitary architectural style of the houses in Rimetea grouped around the central square, with white houses neatly strung out, made Rimetea one of the most beautiful villages in Romania. The village of Rimetea is proposed to be listed as a UNESCO World Heritage Site.

The ruins of the Colțesti Fortress stand on a promontory near the village with the same name. It was built around 1296, as a dwelling and refuge fortress. Another fortress, less known is the Tăuți Fortress, also built in the 13th century in the village of Tăuți.

Trascau Mountains are inhabited by “mocani”. They occupy the Arieș Valley between the Bistra Village (from where Moților County begins) and the Turzii Gorge as well as the Ampoi – Întregalde area. Typical of these inhabitants are the hay-roofs, which give Trascău a special charm and differentiates them from the other mountains of Apuseni. Thanks to them, Trascău is still a living open-air museum, increasingly sought after by tourists and especially photographers.

In the most isolated hamlet of Trascău, Cheia Hamlet, two traditional houses over 100 years old have been relocated. Here, the owners offer accommodation, for a fee.

In the past the “mocani” practiced both breeding and agriculture on the terraces of the gentle ridges. Currently the main activity is breeding, including purebred oxen.

In the central part of Trascau Mountains, villages and hamlets climb up to the tops and plateaus surrounded by deep gorges. The inhabitants are spread in the central area in more than 30 hamlets but there are not more than 2000 inhabitants.

The famous Râmeț Monastery is one of the oldest monk settlements in Transylvania. The old church inside the monastery dates back to the 13th century.

The diversity of the landscape determined by the karst relief combined with the hamlets scattered on the gentle ridges gives Trascău Mountains a special tourist potential. The possibilities of leisure are numerous: climbing, canoeing, mountain biking, rafting, hiking, taking pictures, and discovering the traditional architecture of the houses of “mocani”.

In the Arieș Valley, in the sector between Sălciua and Buru, you can do some rafting. The flow and speed of water are not very high, which is why rafting on Aries can be an activity for families with children.

Canoeing can also be practiced in the Cetii Gorge and on the Vânătările Ponorului Falls. Hikers can enjoy a well-developed network of tourist marked trails.

Accommodation in the Trascău Mountains can be found in the neighbouring area, most hostels are in the Trascău Basin and Sălciua area. You can find cottages/chalets only near the Mănăstirii Gorge –Râmeț Chalet and near the Dâmbău Peak, at the Saruni I Mountain Refuge or the Saruni II Mountain Refuge which is permanently open (refuges belonging to the TRASCĂU CORP Tourism and Ecology Association).

the public road network is well developed in Trascău Mountains; four roads cross from east to west the Trascău Ridge.

* the road Galda – Întregalde – Mogoș is unpaved and difficult on the Întregalde -Mogoş section.

Other paved roads cross different portions of the Trascău Mountains; the most used is the one that crosses Trascăului Basin- DJ 107M – Aiud – Râmetea – Buru – 34 km. Also, the asphalt road Sălciua- Dumești makes easy access to the Vânătarea Doline -5 km.