The bauxite exploitation within the mining area of Rosia de Bihor triggered the discovering of an underground void not connected to the surface, in year 1987.

The encountered cave was named the Crystal Cave from Farcu Mine. Since the beginning, the main attraction was its extraordinary beauty.

Although quickly closed with a gate, the fate of the cave was sealed. The mine gallery of Farcu mine encountered another time the underground void of the cave. 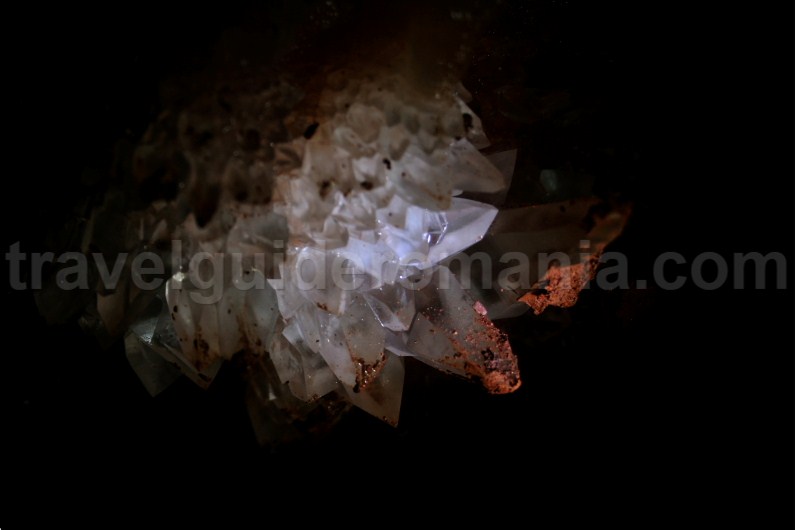 The access of the miners in the Crystal Cave was severely damaging, as it was soon vandalised.

In year 2012, a great initiative made it possible for the Crystal Cave from Farcu Mine to be arranged at European standards and open for the public. This cave was added to an already rich itinerary of tourist caves in Bihor County and became part of the national touristic circuit. 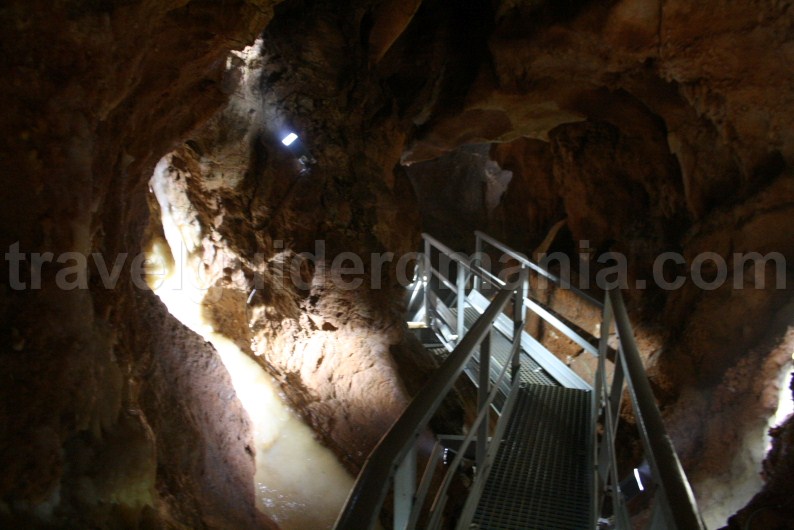 General information on the area: Rosia Commune from Bihor County was first documented in the year 1445. It is one of those rural areas which remained unspoiled by the communist collectivization, or by the Austrian-Hungarian systematisation of villages.

Rosia is still the type of spread village, which includes hamlets with traditional houses. All of these became premises for developing responsible agro tourism, not yet chaotic. 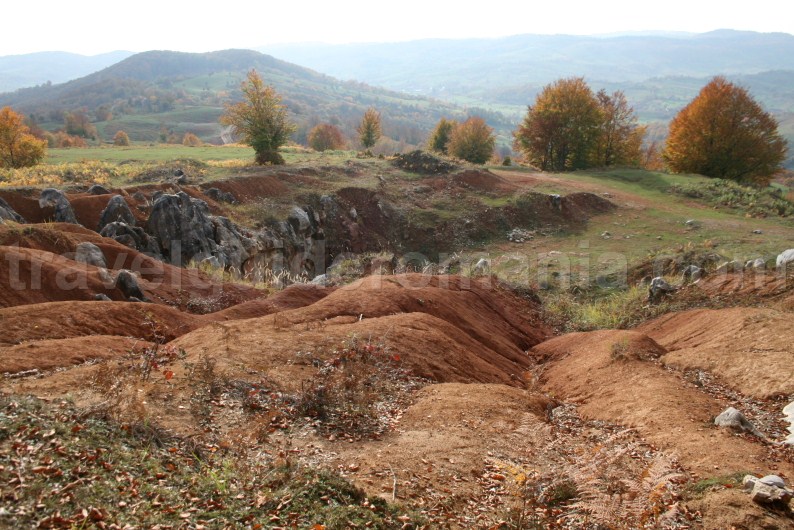 Mining at Rosia – the bauxite exploitation in Padurea Craiului Mountains was first documented in 1915-1916. This activity knows a real growth in the `40s, due to the founding of Dobresti Mining Enterprise. After 1950, a working point at Rosia was opened. 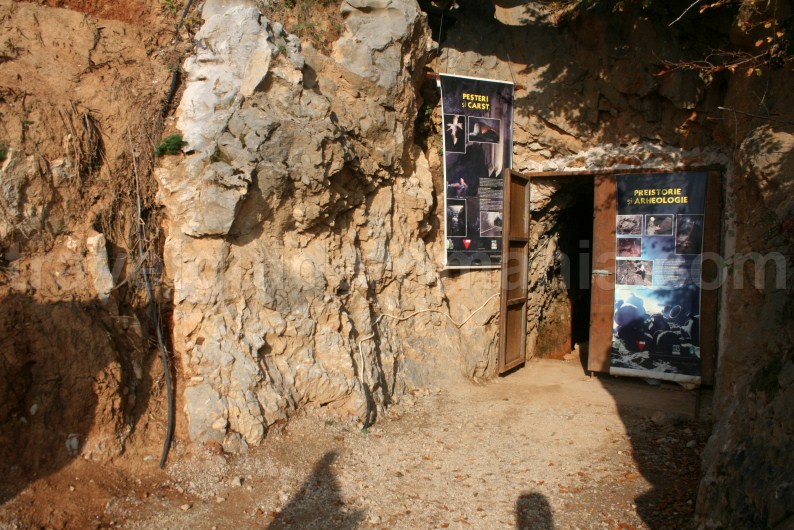 Shortly after the Crystal Cave was found, the entering gallery at Farcu mining point collapsed. Several decolmatations were performed and the activity was resumed for a short period of time. The beautiful cave crystals, untouched by the miners, were saved precisely through the closing of the mine.

22 years after the closing of the mine, fact that generated poverty in Rosia area, seems to bring wealth again. On 20th of June 2012, the Crystal Cave from Farcu Mine, now arranged, was inaugurated and opened for the public. 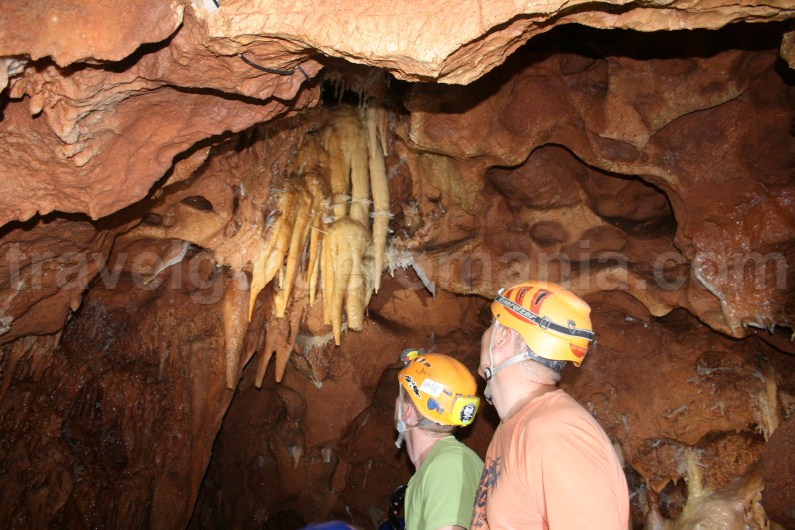 Geological diversity: although only 50% of the entire structure of Padurea Craiului Mountains is made of limestone rocks, these offer a distinctive note to the area.

The karstic relief forms found on the exterior, include: karrens, sinkholes, gorges and canyons. All these forms are named exokarst (exterior karst). Based on the information in specialised literature, the underground relief forms, namely the caves, are named endokarst (interior karst).

Following the speleological researches in the area of Padurea Craiului Mountains, more than 500 caves were added to inventory.

This fact generated the development of speleological tourism and created the base for the management of Crystal Cave. 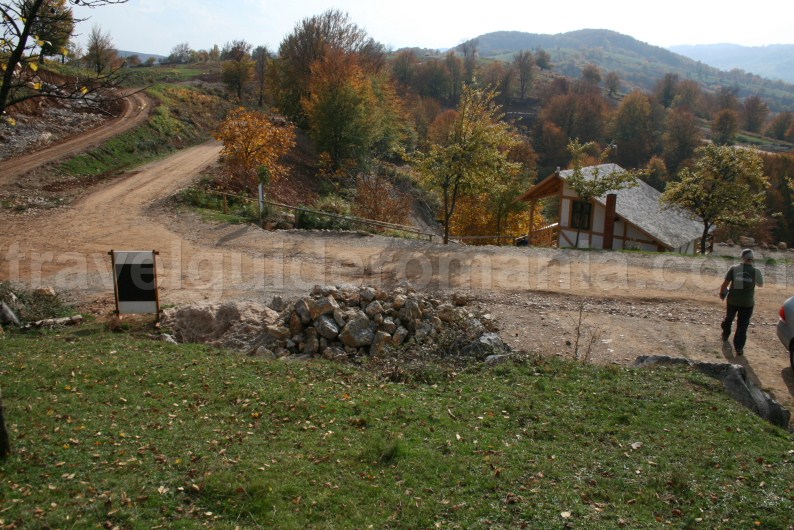 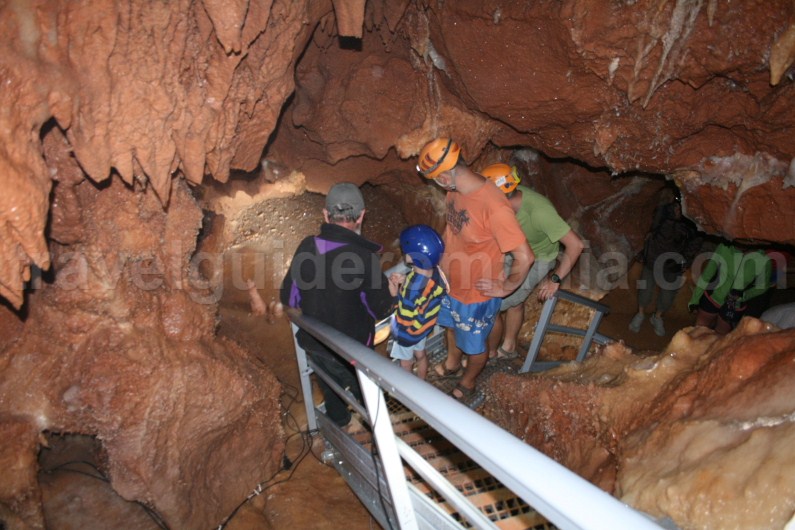 Description of Farcu Mine – the artificial cavity has three entries.

The mine intersects nine underground voids (caves) not connected to the exterior. Two of the nine caves are included within the managed touristic circuit of the cave. 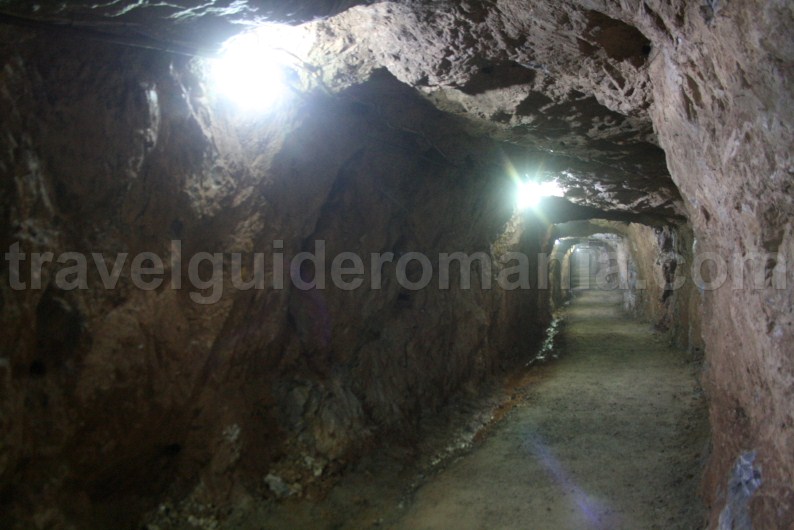 Farcu karst area is located on the central-southern side of Padurea Craiului Mountains, in the superior basin of Rosia valley (tributary of Crisul Negru). Farcu Hill is a high karstic plateau, situated at approximately 400m altitude. It has a variety of extended sinkholes and karrens fields, partially covered by soil.

The Crystal Cave from Farcu Mine is the most important cavity found within this perimeter. Has the expansion of 251m and 16m subsidence. It is a geode cave, with no natural penetrable entrance.

When discovered, the cave was considered priceless. What made it so spectacular was the variety and size of the crystals, but also the “macaroni” stalactites, reaching up to 1.5 – 2m. Unfortunately, shortly after the cave was found, it was vandalised by the miners, who probably still have at home crystals taken from this cave. 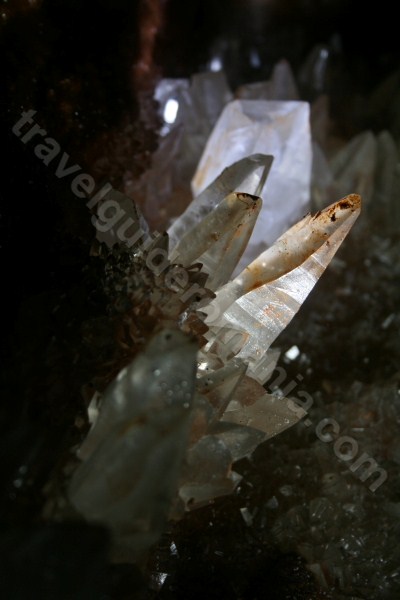 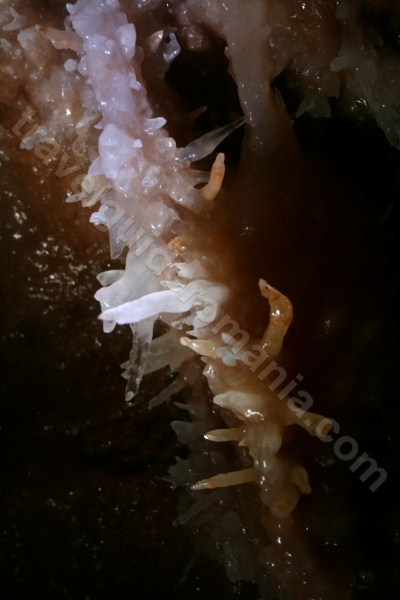 The Crystal Cave from Farcu Mine was arranged, in the first phase, by consolidating of the mine gallery and by ensuring a safe access. A more enjoyable speleological trail was achieved by mounting stairs and metallic landings in the cave`s gallery. An electrical power grid was also installed for highlighting the crystal structures. 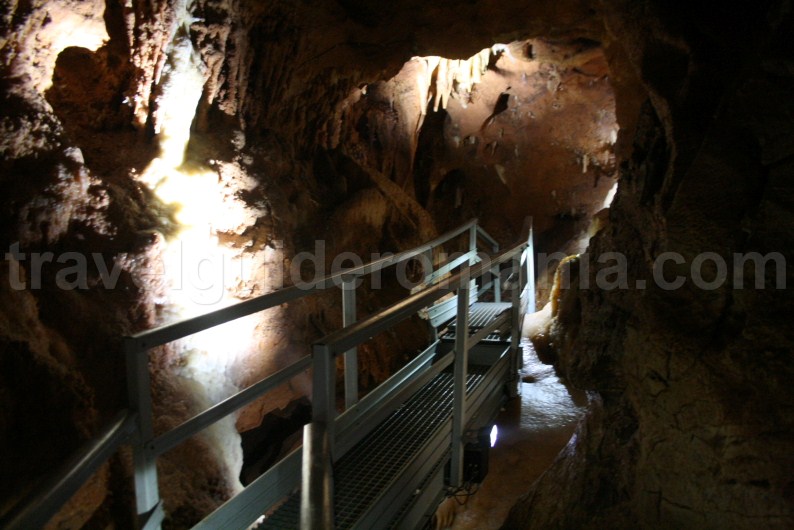 The touristic route that can be visited includes about 200m of mine gallery and 100m of cave gallery.

The point of attraction of the show cave is considered the beauty and the uniqueness of the limestone structures. It ends with a balcony offering a overview of the speleological reservation. 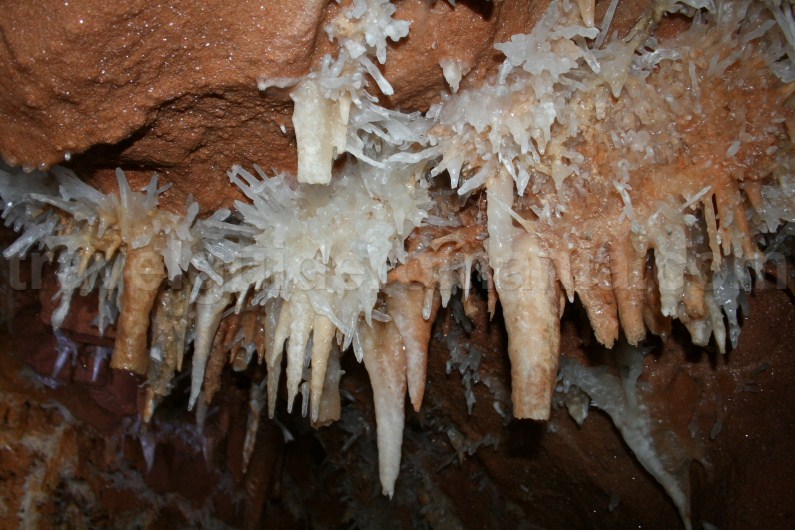 Inside the artificial cavity, in one of the mine`s galleries, a small mining museum was arranged.

You can find here exhibits of working methods in the Apuseni mines, as well as individual equipment of the miners. In this area of the mine you can still see the traction device for the ore trolleys on the inclined plans, as well as the metallic rails on which these trolleys were transported. Although rudimentary organised, the museum is a proof of the difficult working conditions of the miners in Apuseni. 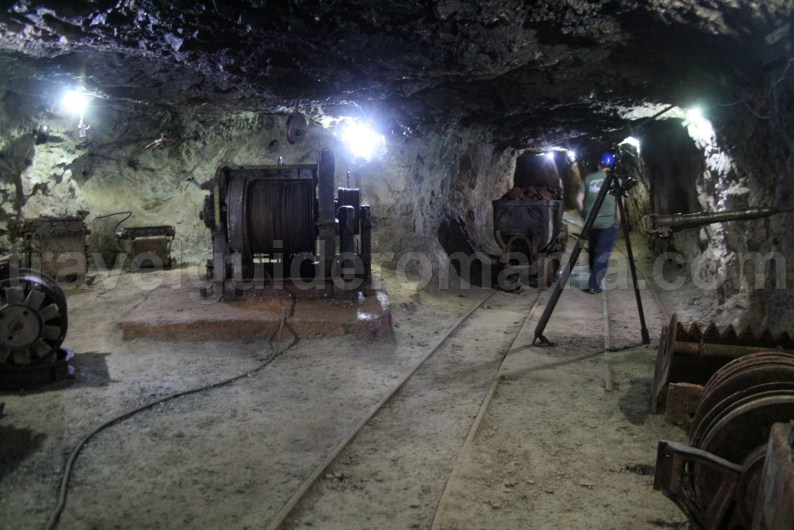 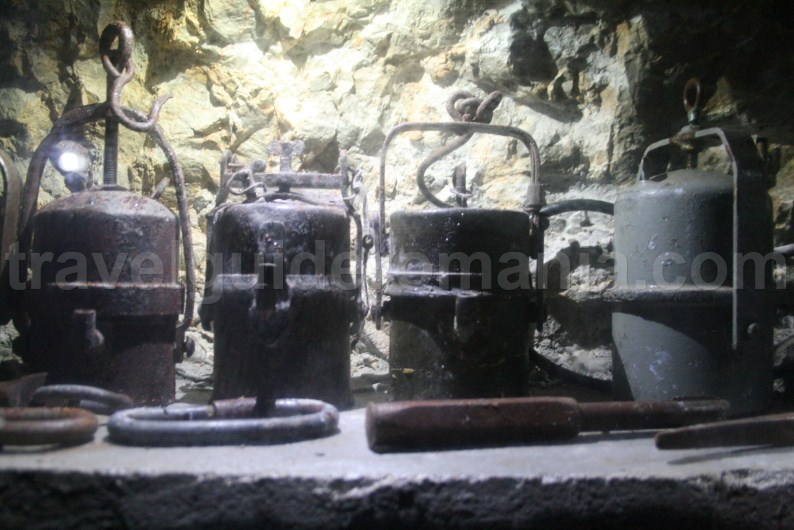 Another imperative is to wear protection helmets.

After visiting the cave we suggest you to walk along the related trail, arranged by the administrators of the area. You shall find indicators with the blue-dot marking sign.

The length of the trail is about one hour. The path climbs along the hill behind the mine, through the beech forest. When coming out of the woods, you will be surprised by the spectacular view over the Lazurilor Gorges.

Rosia karstic area is considered by speleologists a real heaven. Not far from Farcu Cave, you will come across other cavities of national importance, such as: Ciur Ponor Cave, Craiului Cave, Ciur Izbuc Cave, Stanul Foncii Pothole (-350m), Sohodol Pothole (-100m), Fanea Babii Pothole (-130m). For the purpose of speleological tourism, do not hesitate to inquire about the legislation regarding underground access.

Other show caves that you can visit in the area or: Meziad show cave, Vadu Crisului show cave and Bear’s cave. 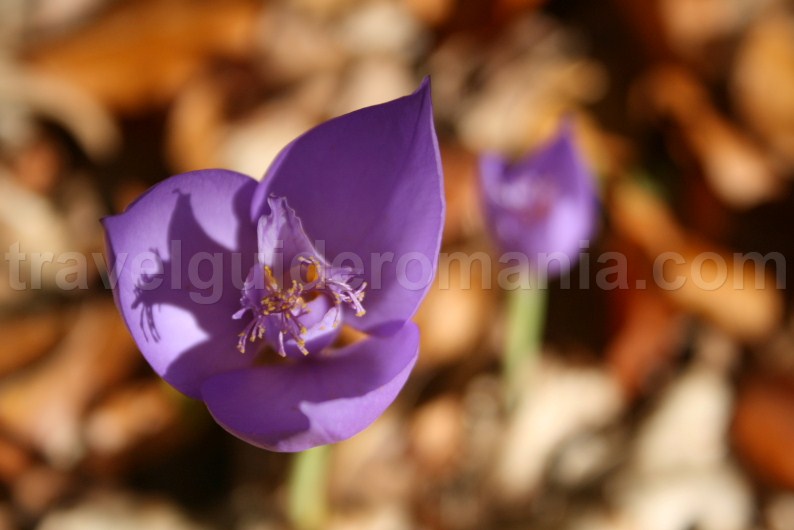