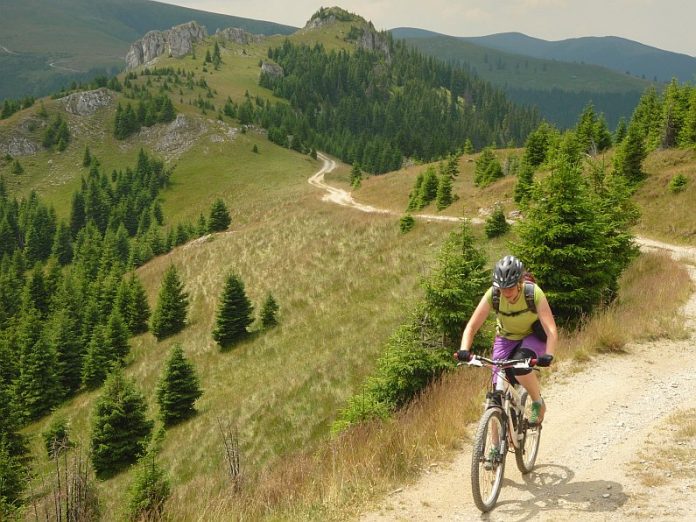 The Latoritei Mountain Ridge is one of the longest and most spectacular high ridge mountain biking trail in Romania. It is crossed by a paved and dirt road of 42 km, from the Ștefanu Saddle up to the Măceşului Valley.

The road is known under the name of Strategica or the Strategic Road. It goes on about 17 km in the alpine tundra, at altitudes of 1800 m -2000 m. After that it descends on the ridge scattered with dwellings up to 540 m altitude, on the road DN7A, in the Măceşului Valley.

This road is an invitation to a real adventure for the enthusiasts of mountain bike.

Transalpina (DN 67C) is the highest road in Romania, reaching an altitude of 2145 m in the Urdele Pass.

In comparison, the maximum altitude on Transfagarasan is 2.042 metres.

Transalpina crosses the Parang Mountains from Obarsia Lotrului to Ranca. It makes the connection between the towns of Novaci in the Gorj county and Sebes in the Alba county, on a distance of 141 km.

Initially the road was used by the shepherds from Marginimea Sibiului to cross the mountains with their flocks of sheep in Țara Românească. The road was redone between 1934-1939 by king Charles II and rehabilitated during the Second World War.

Following the asphalting after the 2010, Transalpina was officially opened to traffic in 2015. The road is closed during winter. 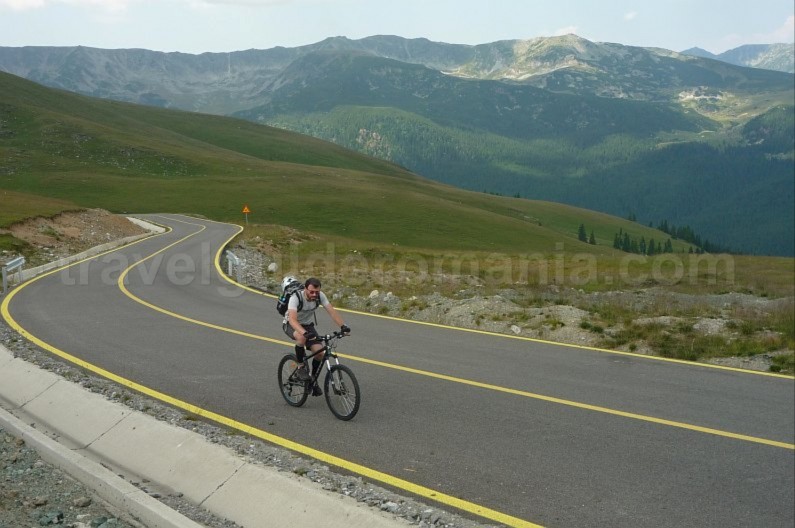 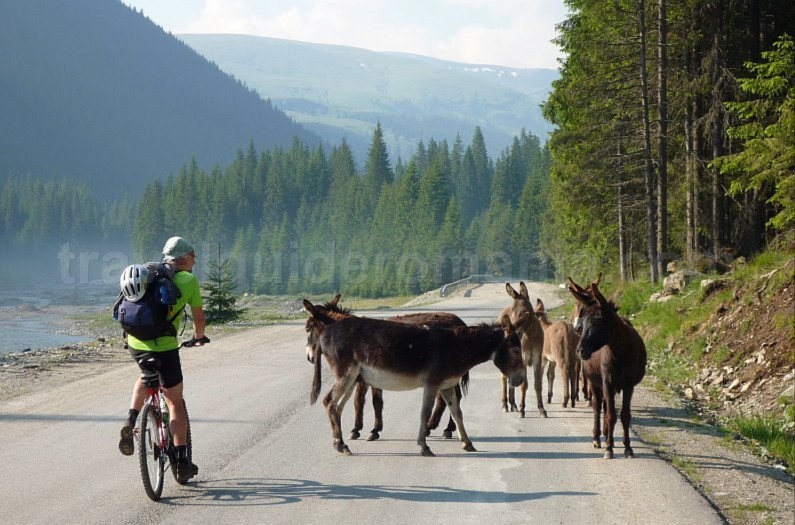 Strategica or the Strategic Road which crosses the Latoritei Ridge was built by the Germans during the First World War. 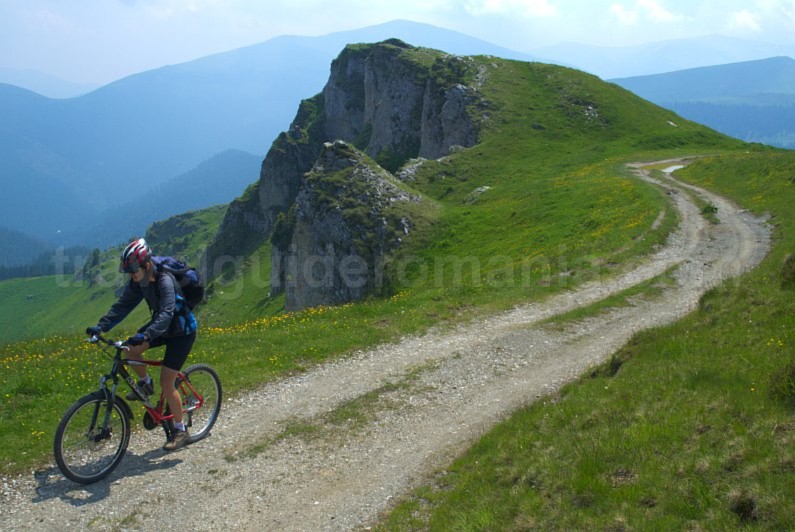 Strategica road emerges from the Transalpina in the Ștefanu Saddle, at 1915 metres.

There is a wooden construction and a few info panels at the point of intersection. From Obarsia Lotrului (1350 m) up to the Ștefanu Saddle (1915 m) you have to climb 12 km on Transalpina.

Obarsia Lotrului is a place for camping with cabins, camping and cottages, and also a junction of auto and tourist roads.

It is here as well that the Transalpina road intersects the  mountain road Brezoi – Voineasa – Petrosani (DN7A – 106km). On the section Petrosani-Obarsia Lotrului this road is in poor condition.

The Strategic Road is not marked, but at least it is easy to follow, in the alpine tundra.

For the descent from the Fratoșteanu Peak up to the Măceşului Valley, even if the road follows the ridge, we recommend you to have a GPS track. The Strategic Road goes initially on the contour line, just under the rounded tops of the Latoritei Mountains. It provide broad perspectives to the right, over the Latoritei Valley and the Căpățânii Mountains. 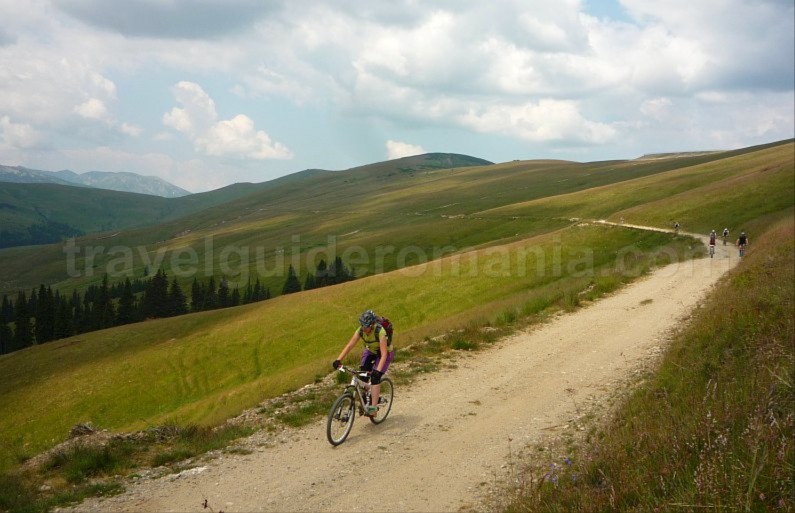 At about 3 km from the saddle, a road descends to a farm and beyond to the hidden lakes in the Latoritei Valley. Until the lakes there is a descent of about 300 m elevation gain for 4km. Unfortunately, the access for bikes is only for the first 2.5 km. 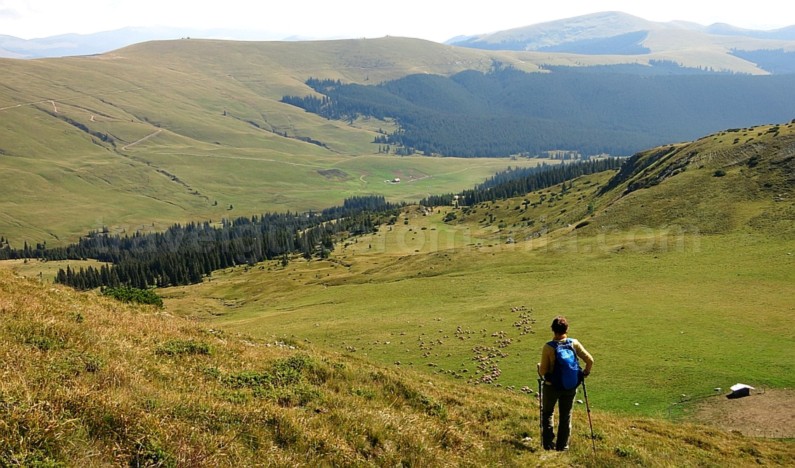 The farm down the valley, seen from Transalpina road

Further, the road (unmarked) becomes a path, barely visible. It crosses the Latoritei Valley and a small forested ridge to reach one of the most isolated and wild areas in the Carpathians. It reaches a first lake, Violeta, situated among fir trees, in a swampy area.

At just a kilometer away you can find Lake Latoritei. It is considered the glacial lake situated at the lowest altitude in the country: 1530 m.

The climb to Lake Latoritei from the Cottage Petrimanu is marked with a yellow cross.

We are returning back to our route of mountain biking. After about 4.5 km away from the Ștefanu Saddle, the road passes under the chairlift of the ski slopes of Transalpina Ski Resort.

At about 5 km away from the Ștefanu Saddle a grassy road goes down to the right, on the Latoritei Valley at the Cottage Petrimanu. Along the next 4 km is  hard to go on the bicycle saddle all the time. The road is turning further down to a path and loses about a 500 m elevation gain.  Another obstacle is the crossing of Latoritei valley, because there is no footbridge. 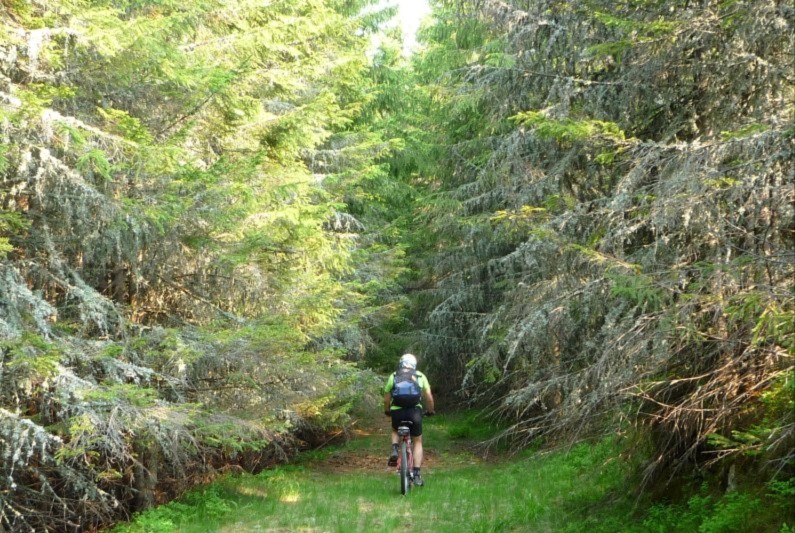 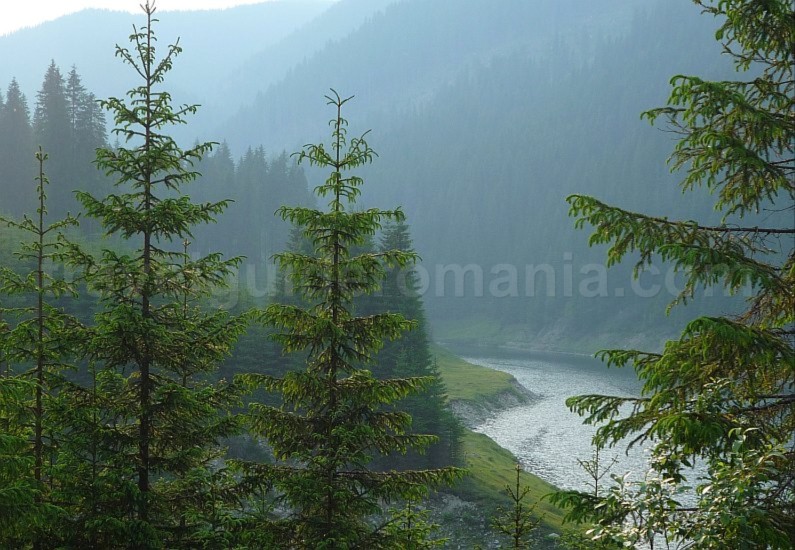 Once on the valley you will see the forest road that passes by the lakes Galbenu (1300 m) and Petrimanu (1130 m). The waters of these lakes go through the underground galleries under the Latoritei Mountains, into Lake Vidra on the Lotru River. This is the largest reservoir in the area. Below the lakes, the Latorita valley crosses a deep and wild gorge, bordered by impressive precipices, with an elevation gain of over 500 m, to the Ciungetu. 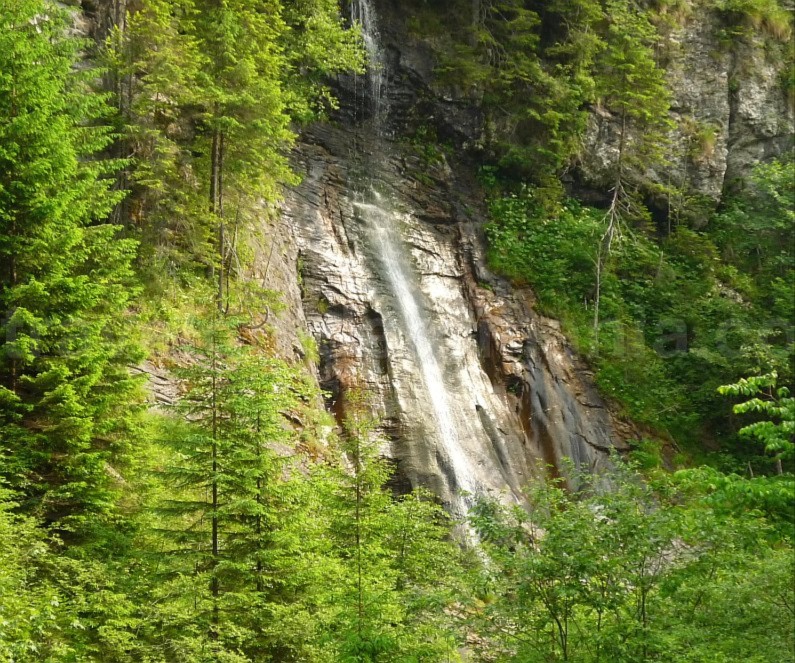 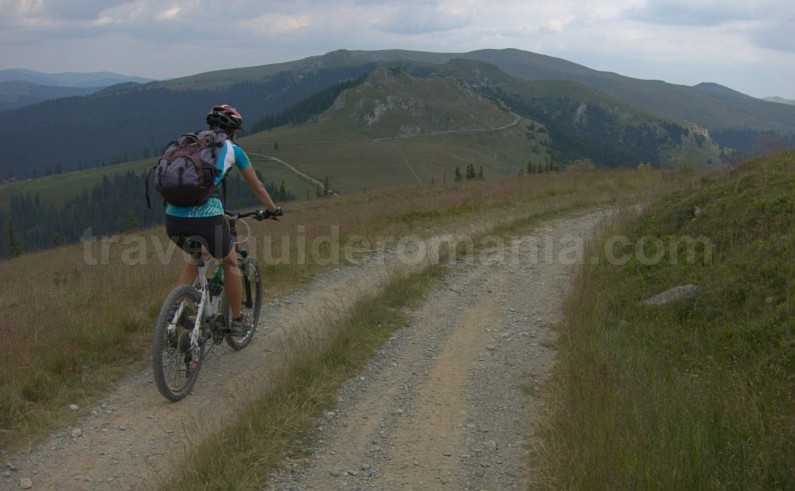 Next, there comes the limestone region of the Latorița, Mount Boarneșu. On the next 5 km, between the Pietrile Saddle (1760 m) and the Fratoșteanu Peak, the road goes on among the limestone spurs, seeming suspended between heaven and earth. 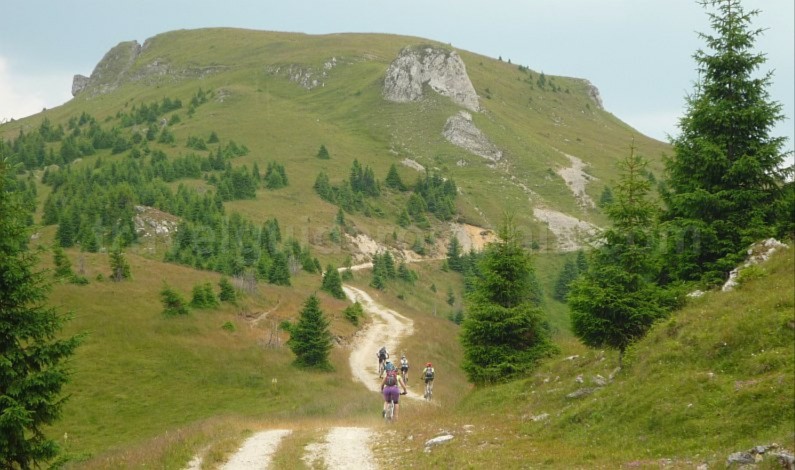 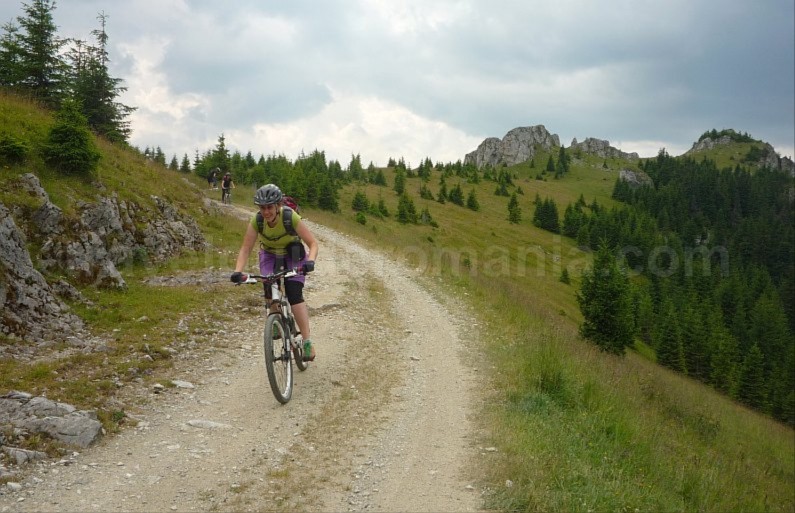 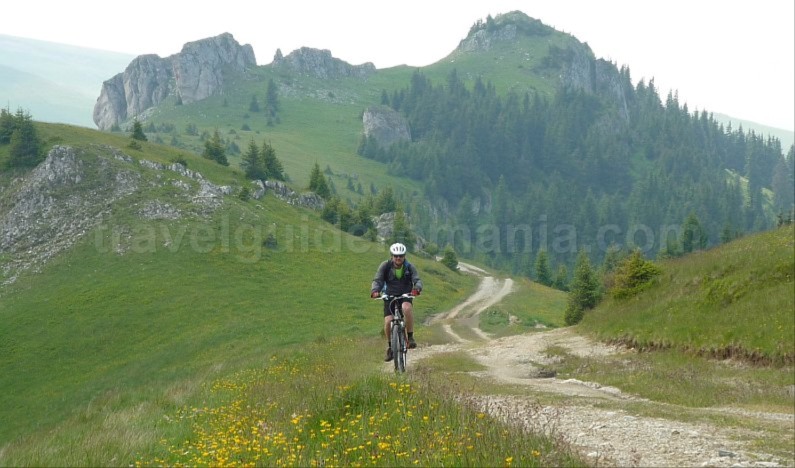 Down the road you can observe a huge portal, a result of the collapse of the ceiling of a cave.

Once arrived under the Fratoșteanu Peak you must make a detour to see a wide panorama over the surrounding mountains and over the lake Vidra.

In case of bad weather you can descend from the trail under the Fratoșteanu Peak, to the north. Here, there is a forest road that leads down to Curmătura Viduței (1571 m) and after that to the asphalted road between Voineasa and Obarsia Lotrului.

Further, a 25 km descent follows, from 2053 m to 530 m to the Macesului Valley. First it crosses a forested area, then, it arrives in the glade that houses the ranger’s house of  Plaiul Poienii. Here there is a spring, one of the few springs located in the Latoriței Ridge.

Also, it is here that the road forks:

If you left the car at the Obarsia Lotrului Cottage, where there is a big parking lot, you would have to cycle from the Macesului Valley, on asphalt, on DN7A. It is almost 50 km lenght and a 1000 m elevation gain.

For staying overnight in the area you have countless possibilities of accommodation. Nearby, at about 7 km away there is the Voineasa Resort. Along 25 km, there is the possibility to avoid the asphalt which leads to Obarsia Lotrului by following the Lotru Valley. This unpaved variant of 27 km passes by the artificial lake Balindru and the dam of Lake Vidra.

At the dam, the road follows the shore of the lake on the deserted resort of Vidra and comes out to the paved road, DN7A, 16 km from Obarsia Lotrului.

Being a road that reaches altitudes of over 2000m you need mountain equipment : 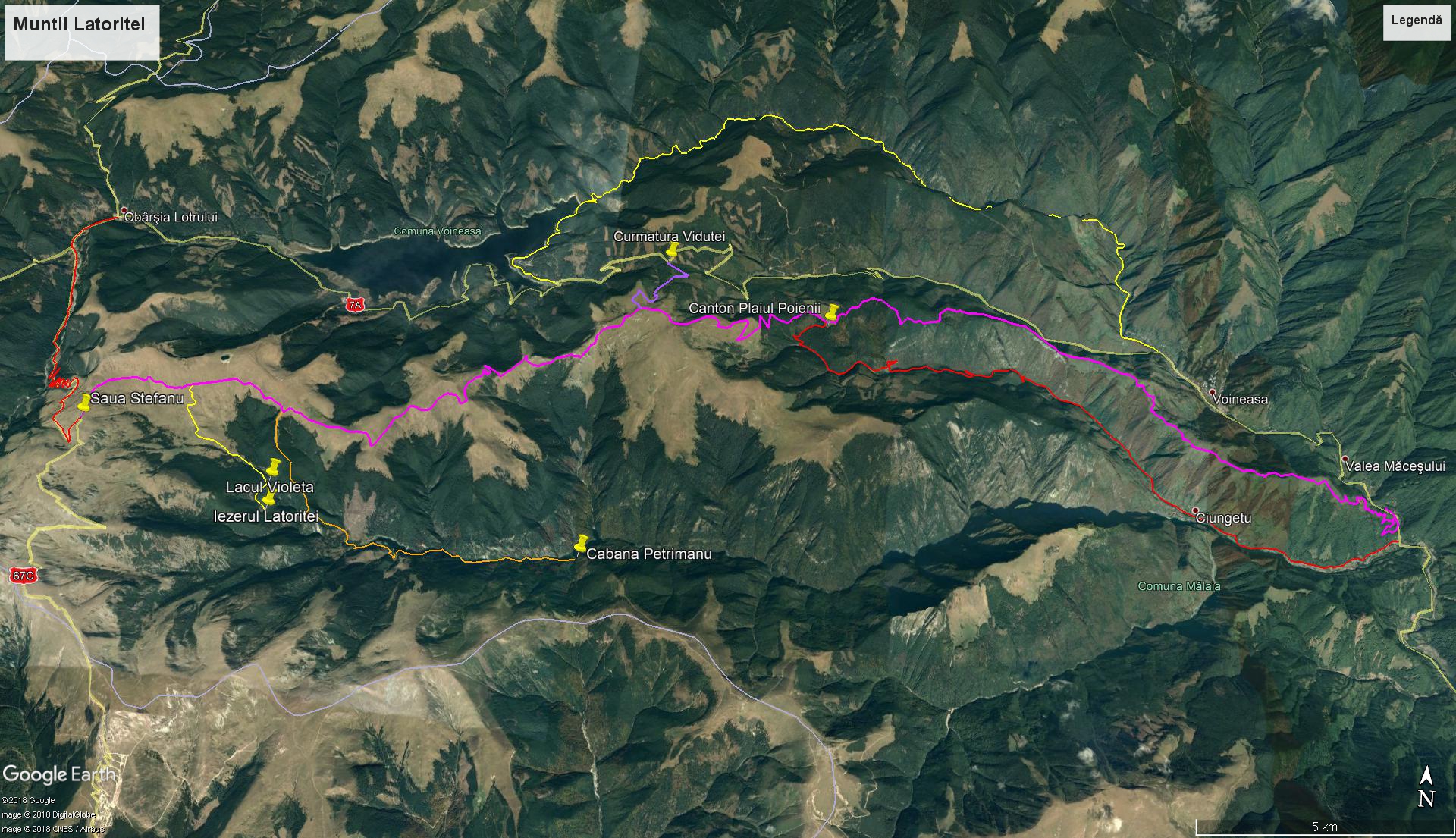