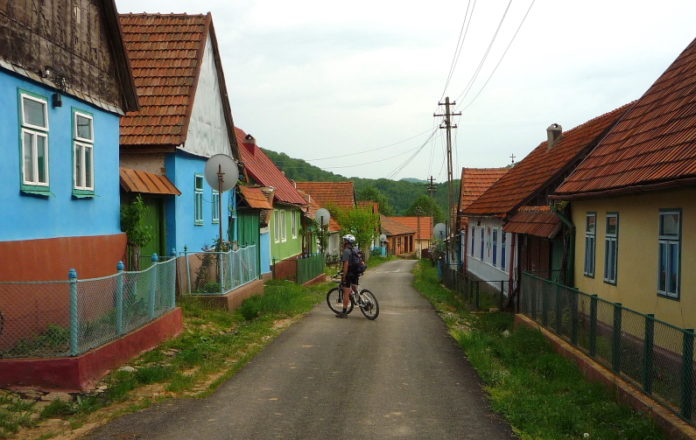 The isolation and the long distances from other localities as well as the difficult access allowed the Czech communities to keep their culture, traditions and language alive.

In the same time, this isolation and the mine closure, where a lot of Czech had worked, contributed to the migration of most of the Czech in the Czech Republic.

The locals name the Czechs from Banat “pemi”, a word deriving from “Bohemians”, Bohemia being the region of origin of the Czechs.

In the Banat Mountain their colonization was made in two stages, in 1832 and in 1827. Those who arrived in 1823, around 750 persons, founded the villages Svata Alzbeta and Svata Helena (Saint Helena). The first one does no longer exist because of lack of water. The second wave of approximately 2,000 persons arrived between 1827 and 1828 on barges on the Danube. They were brought here to serve in the border guards regiments. The Czechs in Banat were the last colonized populations by the Habsburg Empire. The intention was to assure the border guarding and to populate the border regions.

In the 6 villages, the Czechs are the majority, constituting over 90% of the population. Most are located in the villages Gârnic and Saint Helena, around 500. In Eibenthal, there are about 300 people, the fewest living in Ravensca and Șumița, a little over 100. The Czechs generally deal with agriculture, animals, and lately with agritourism.

The Czech State as well as the Democratic Union of Slovaks and Czechs of Romania financially support the Czech communities. Investments are made for road asphalting, renovation of schools, churches and cultural facilities, ensuring current water, the organization of socio-cultural events or for the improvement of medical care. Also, the Czech State sends teachers from the Czech Republic to teach children from these localities.

The Czech villages attract travelers due to the wildness of the area. Vast forests of deciduous trees alternate with glades where the views over the hills are vast, some with visibility on the Danube.

Next to Saint Helena and Gârnic there are karst plateaus with sinkholes and limestone pavements and the karst valleys near these villages hide natural bridges and caves.

Four of the villages, namely Gârnic, Saint Helena, Bigăr and Eibenthal are located on the territory of the Natural Park Porţile de Fier.

Ravensca is located at the boundary of the park, on a central ridge of the Almaj Mountains, at an altitude of 740 m. It is the village at the highest altitude but also one of the most isolated villages. Although three roads lead to this settlement, in the winter the village can remain completely isolated. These are mountain roads, more difficult to cross with a small car.

The village Șumița is also isolated, being the furthest from the other villages. A recently paved road was built in order to prevent the complete depopulation of the village. The road crosses the ridge on which the village of Șumița is situated, from Putna to Lăpușnicel.

The area is currently much more known among the Czechs tourists who come in large numbers to discover the “Land of the Czech Banat” in Romania.

The Czechs, through the Club of Tourists from the Czech Republic have marked the connecting trails between the villages and a number of trails in the circuit. The trails are near the villages and lead to different sights (caves, karst formations, water mills) or lookout points.

You can find the routes here.

The Czechs also helped the locals to open their homes to tourists, offering accommodation and local food. If you see on some gates the sign “Ubytovani”, it means accommodation in Czech. The locals are very hospitable. You can find here a site with detailed information on the villages, but in Czech.

A part of the connection routes between villages, marked for hiking, can be crossed on a mountain bike as well. The routes are of medium difficulty.

These trails will offer you a journey of cultural and landscape unique in Romania. Here, you will find the track the route of the Czech villages in Banat as well as other biking trails that lead to these villages. The trails are part of the collection of maps with biking trails from the Banat Mountains.

It also has technical areas, with rocky roads, areas with steep slopes, where you are forced to do some push-bike, in particular between Sf. Elena and Gârnic.

Between Ravensca and Bigăr there is also a wilder option of the trail, without descending to the Danube according to the track. The other option follows a series of ridges either forested or with clearings. At first, there is a blue line marking which leads to Șumița and then an unmarked trail up to the Debeliliug Glade.

Between Bigăr and Eibenthal, of the two connecting trails, red line and yellow line, the latter, which is longer, 26 km, is more suitable for mountain-biking.

You can do some less difficult circuits that lead to the 6 villages, as each of them is reachable on at least two car roads. These are mostly roads in bad condition, difficult to cross by car, but good for your mountain bike.

In the village of Saint Helena there is also the possibility to rent bicycles.

On the plateau next to St. Helena there are a few wind turbines, the area being favourable to them because of the wind locally called “coşava”. It is a warm wind that comes along the Danube and beats mainly during spring and autumn.

– from the south: DN 57 Oravita – Pojejena – Moldova Nouă – Orşova (153 km). You can reach Orsova from DN6 – either from Drobeta Turnu Severin or from Plugova – Herculane.