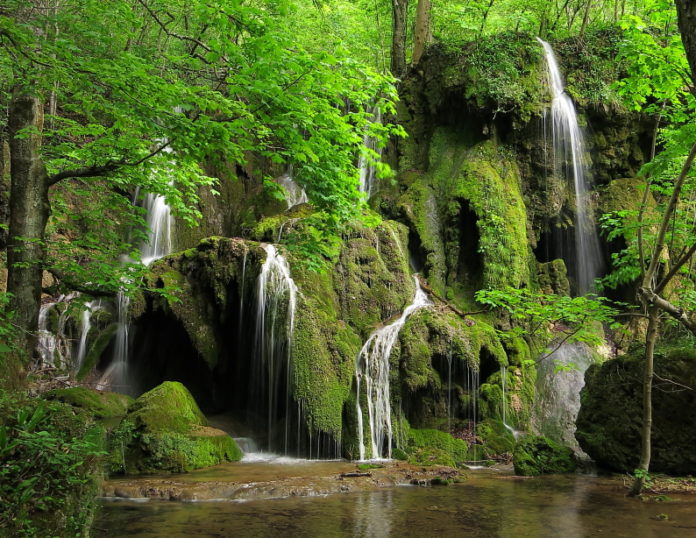 The waterfalls in Nerei Gorge – Beusnita National Park are among the most beautiful and famous waterfalls set on limestone in Romania.

Nerei Gorge – Beusnita National Park occupies an area of 36,364.8 ha of which almost 19% is represented by the 6 nature reserves of the park:

The purpose of Nerei Gorge – Beusnita National Park is to protect:

* the karst environment. The park is located on the most compact limestone surface in Romania-over 800 sq. km.

* the cultural-historical values of the region. Note: the ruins of the Beiului Fortress from Socolari, the remains of a roman road on the Cameniței Valley, the Calugara Monastery, the caves with traces of human habitation from the paleolithic and neolithic etc.

Most of the Nerei Gorge – Beusnita National Park is covered by beech forests. You can also find hornbeam, oak, ash and alder, and at lower altitudes gallery forests of white willow.

In 2017, over 4000 ha of secular beech forest from the Nerei Gorge – Beusnita National Park were made part of the Unesco Natural Heritage.

In the Nerei Gorge – Beusnita National Park there are over 470 caves and pit caves, most of them accessible only with caving equipment. The longest cave in the park is the Cave cu Zgarieturi (with scratches), with a development of more than 3000 m.

The main attractions of the Nerei Gorge – Beusnita Natural Reserve that draw numerous tourists are:

the Nerei Gorges where you can find Dracului (Devil’s) Lake;

The main access to the Nerei Gorge – Beusnita Nature Reserve is located near the confluence between the Nerei Valley and the Beiului Valley. This place is known as the Beiului Bridge, an important trail intersection. Here you can find:

* information boards that guide you to the sights of the reserve

* a small parking lot where you can leave the car.

* the point where the reservation entrance fee can be paid (5 lei (around 1 euro/ pers). The Beiului Bridge is reached from the village of Potoc (about 5 km), on asphalt road.

The route can be done by bike, as well. You can choose a spectacular circuit on the trail Sasca Montana – Potoc – Socolari – Beusnita Waterfall- Beiului Bridge – La Tunele – Sasca Montana -34 km.

Ochiul Beiului is a sinkhole lake with a diameter of 15 m and 3.5 m in depth. It is continuously fed by a strong karst spring which gives the impression of the blue-green water. Its rocky bottom can be seen from the bank of the lake. The karst spring never freezes, due to the constant temperature between 4 and 8o C.

Upstream of Ochiul Beiului Lake, the Beiului Valley continues with the Beul Sec Brook. The water course is dry most of the year, it activates only during heavy rains. The yellow line marking will continue until the Crivina Forestry Cabin. Near the Ochiul Beiului, downstream, there is the confluence with the Beusnita Valley, tributary that falls in steps into the Beiului Valley.

Beusnita Waterfalls have been formed over hundreds of years by the action of the water on limestone. The latter was dissolved by water and was deposited along the river, over the vegetation, forming the limestone tuff.

The three vertical waterfalls upstream the Beusnitei Glade reach a height of 15 m and comparable widths. The beauty of vertical falls is given by the numerous water curtains that pour over the green moss. Several caverns were formed at their base in the limestone tuff.

We recommend you to visit Beusnitei Waterfalls, as well as the other waterfalls in the Nerei Gorge-Beusnita National Park during spring, after snow melt or after rain, when water is abundant and it activates strong karst springs. In dry periods the water is scarce, sometimes the waterfalls completely dry up. Keep in mind that during the spring holidays (Easter, 1st May) the trail is very busy.

On another tributary of Nera, Susara, there is a waterfall you can easily reach,  Susara Waterfall. The waterfall has 2 steps and is about 15m high. It is located along with the homonymous gorges in the Susarei Gorge Reserve.

* on the blue cross marking that crosses the trail Sasca Montana -Susara Gorges-Carbunari.

* from the end of the village of Sasca Montana, after about 2.5 km you can reach Susarei Waterfall. You will do a picturesque trail, along a valley with small travertine and gours thresholds, without significant elevation gains.

Bigar Waterfall is one of the much-publicized waterfalls in Romania.

The waterfall became known when it was presented as one of the most beautiful waterfalls in the world, on the site The World Geography, in 2013.

Bigar Waterfall is located on the asphalt road DN57B at 17 km from Anina and 12 km from Bozovici, off the 45th parallel.

It was formed on a short tributary of the Minis, on the Bigar Creek, the waterfall being at its spill in the Minisului Valley. The access to the Bigar karst spring is made on a wooden bridge that crosses the Minis and on the set up footpath along the small valley of Bigar. Keep in mind that there is a fee to pay.

The Bigar Valley has its spring 200 m upstream of its spill in Minis, under a rock.

Bigar Waterfall impresses not by height, having only 8 m, but by its bell-shaped form covered by green moss, on which the water trickles into strands with variable flow, depending on precipitation.

8 km upstream Bigar Waterfall, also on the Minisului Valley, there is another waterfall, Carsa Waterfall. It is a two-step waterfall, about 30 m, also visible from the road.

Near the Ducin Nature Reserve, at the base of the slopes of Carsei Hill and Morii Hill you can find the Moceris karst spring. It forms nearby the waterfall of the same name, located about 4 km from the village of Moceris.

Access to Moceris Waterfall is on foot following the forest road that accompanies the Moceris Valley. The waterfall, which resembles Bigar Waterfall, falls from a height of about 10 m.

Vicinicului Waterfall or Valea Mare Waterfall is accessible by following the Vicinicului Valley when leaving the village of Ilidia. Up to the waterfall the forest road of about 4 km passes through a short section of gorges. The waterfall is located several hundred meters upstream of the Valea Mare Forestry Cabin.

Both waterfalls plunge over a bed of limestone tuff, from altitudes of up to 10 m. The waterfall flow depends on the amount of rainfall, in dry periods the waterfalls being drained.

The villages of Ciclova Montana and Ilidia are reached from the city of Oravita, on DJ571. The road continues to Socolari-Potoc-Sasca Montana.

In Oravita you can also find the nearest railway station (and the oldest in the country) to the Nerei Gorge -Beusnita National Park. Also, the oldest mountain railway in the country starts here, Oravita-Anina. Regular bus rides from Resita or Timisoara also arrive in Oravita. The connection to Sasca Montana is made by minibuses.

The spectacular limestone landscape, with valleys, waterfalls and emerald lakes, as well as its diversity of species make the Nerei Gorge -Beusnita National Park a very attractive ecotourism destination for nature lovers.