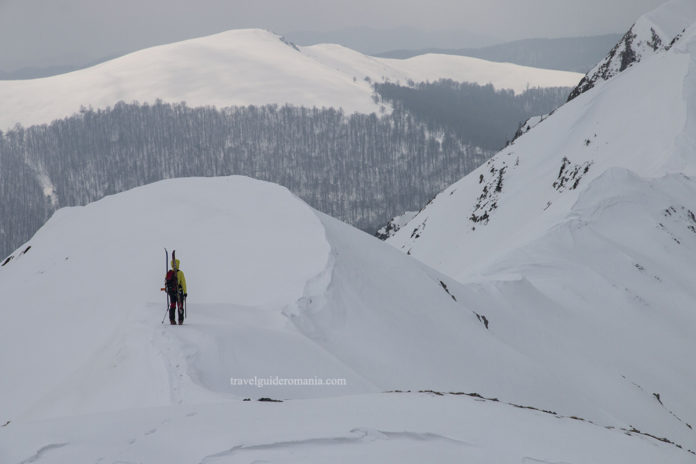 Oslea Ridge is a very good area for all those who want to do a one-day ski touring in the Jiului Valley Area.

The whole tour, as a circuit, demands medium/advanced ski touring abilities as well as use of technical equipment such as ski crampons/ice axes.

The Oslea Ridge is a sub-unit of the Vâlcan Mountains, being situated at the western end. It is divided by the Piule – Iorgovanul (Retezatul Mic) Mountains from the Jiul de Vest River. This karstic ridge intersects at its end in the Jiu-Cerna Pass with the Cernei Mountains as well as the Godeanu Mountains.

Geologically speaking, in the central area, between the Oslea Peak and the Coada Oslei Peak, the ridge presents itself as a 200-300 m thick karstic layer. This rock gives the ridge its narrow alpine aspect, and because of that she is resembling the Piatra Craiului Ridge.

Until 1918, this ridge was the frontier between the Austro-Hungarian Empire and Romania.

Nowadays it is the limit between the Gorj and Hunedoara Counties.

Duration: 7-8 hours, depending on the tour goal (whole/partial tour), snow state, number of participants and their technical level.

Tour type (during winter): trail marking is not visible. There are some marking poles (red line) barely visible in some locations. Basically, you need either a GPS track or one of the participants to have already been here during winter or summer.

The tour can be done:

The main activities are:

Accommodation: Depending on what you expect you have several options.

Trail access and car parking: Depending on the area where you sleep, probably the best parking space is opposite the Hunting House Câmpușel. During winter, the road is cleaned. After parking your car here you follow the asphalted road downstream for 1 km until the old Forest House Câmpușel. It is a wooden building in an advanced degradation state.

Although it is easy to guess the trail at the beginning (we climb along the valley) you have to pay attention after around 500 m when you turn left. You follow a road the climbs up to the Ursu Fold.

If you miss the road (it also happened to us) you can climb through the valley. The soil is more uneven and you have to improvise (you have to cross the string several times) especially if the snow layer is not very thick.

Anyways you will have to come out of the forest in order to reach the ridge or the Piciorul Ursu. There are many roads made by the forest exploitations. It will be easy to find one.

Once you are out of the forest you can find your way easier, if there is good visibility. The ski touring climb is pleasant.

To arrive at the main ridge, in the Coada Oslei Peak area (1898m) you will have to climb a cumulative elevation gain of around 750m.

On the last part of ski touring climbing, where the slope becomes quite abrupt you will probably have to use the crampons and the ice axes. From here on you will choose what equipment to use in order to cross the ridge. Finally, the decision will be made on the spot, depending on the snow state.

As the snow was frozen, when the TGR team crossed the ridge, we could use the skis only at the final end. The touring skis were bound to the backpack and we used ice axe, ice crampons + 1 trekking pole.

Being a narrow ridge you have to carefully pay attention to sliding as well as ledges.

The southern slope is particularly abrupt. There are more technical areas where you have to surpass some rock tips.Because of that, the way you use your crampons/ice axes is very important here.

This area is between the Ursu Peak and the Știrbu Peak.

After the second half of the ridge you surpass the Oslea Peak, the highest point of the trail, 1953m.

During the whole trail you have a panorama view over the Retezat – Godeanu Mountains. During clear days you can see the Parâng Mountains and the Cernei Valley.

Duration for ridge area: around 2 hours.

You arrive at the La Suliți Saddle, which is a good reference point. For those who come with skis, the real fun begins now. Until the Jui-Cerna Pass you have a 550m descent.

Theoretically you are on a trail marking, but during winter it is almost impossible to follow. You will have to follow the ridge line under the Șarba Peak.

After an alternation of clearings and forest areas you reach the DJ66A road which links the Cernei Valley and the Jiului Valley. You descend on skis, on the road, until the place you left your car, ending thus the circuit.

Duration descending up to the car: around 2 hours.

You should consider an annual event that actively promotes the area: the Oslea Free Ride Contest.

The ridge is a trail that is worth doing during winter or summer/autumn when the nature puts on its finest clothes.