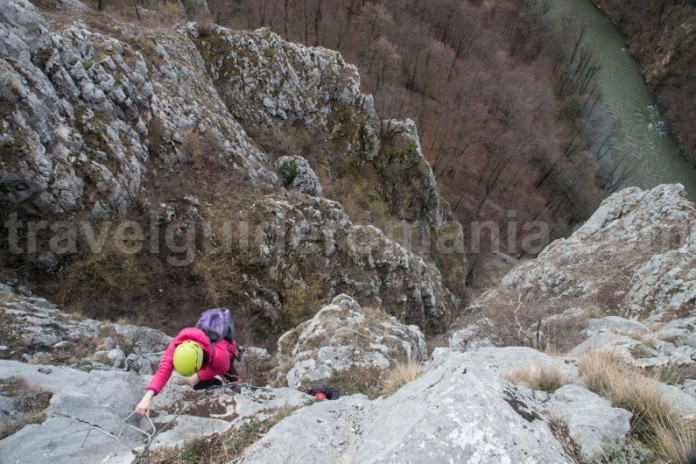 The via ferrata route from Fairies Wall – Vadu Crisului – Fast River defile is a spectacular climbing route which provides an extraordinary view above the valley and the defile walls.

It is a difficult enough route that addresses to people who already done via ferrata routes or to those who are accompanied by guides.

The Fast River is the only river which succeeded to traverse the Apuseni Mountains from one side to the other. Its springs are found in the Someșean plateau in the place so called Izvorul Crișului (River’s source).

Between the localities Șuncuiuș and Vadu Crișului, on a 3 km distance, the most impressive part of the defile has developed. The walls predominantly straight, rocky and have heights up to 100m. This area of the defile is found in the Pădurea Craiului Mountains, a sub unit of the Apuseni Mountains.

The via ferrata route from Fairies Wall – Vadu Crisului was inaugurated in 2015 and its purpose was the increase of the touristic potential of the area.

The via ferrata routes have the advantage of being less difficult than the climbing ones and can be traveled by amateur tourists who are not required to have advanced technical knowledge.

To get easier to the via ferrata route we suggest to leave the car near the sports hall from the Vadu Crișului village, nearby Vadu Crișului train station. If you don’t have a car you may get here by train from Oradea or Cluj.

Starting from the Vadu Crișului sports hall towards the via ferrata route the shortest access trail is along the railway line that traverse the defile. We pass by the Casa Zmăului (Zmăului House) Cave where the old Salt Custom is also found. Another via ferrata is found here, via ferrata from Salt Custom. We don’t advise you to do this via ferrata first because is much more harder then the one at the Fairies Wall.

The old Salt Custom house was documented since 1256.

Another five-ten more walking minutes on the trail and we will have on the left side a detritus in the forest. The access towards the Șoroș climbing route is on the same path going towards the via ferrata route.

The via ferrata route from Vadu Crisului is found in a steep rock of about 100m which is called the Fairies Wall (Peretele Zânelor).

The fitting is quiet comfortable. There are also more difficult passages where each lap participant will have to use his own forces to overcome the beetle passages. Pay great attention while climbing not to give stones into the teammates that are lower than you. Especially in spring time the rock is more friable.

The route is not recommended  to be done from top to bottom!

The via ferrata lanyards are specially made such that in case of falling they can alleviate better the shock. It is totally forbidden to use the strap loops as lanyard-potentially fatal accident.

Pay attention also to the type of footwear you enter the trail. We recommend using three seasons boots with adherent to the rock sole. For hands protection you can take gloves on you.

Hydration and nutrition: take with you the water and sweets. On the way it is appropriate to stop for rehydration.

During the winter months if snow covers the trail and rock walls climbing is more difficult. Also, there is a risk of slipping. We do not recommend to enter the track if it rains. The rock and the cables will be wet and slippery.

Duration: depending on the number of lap participants and on their level of experience, crossing the route can take between 1.30 – 2.30 hours.

The crossing of the via ferrata route from Vadul Crisului is appropriate to be done by people who are over 16 years old. For children the route is quite difficult.

Certainly you shouldn’t take children with you unless there is an experienced adult and in this activity provide him extra insurance with rope.

The entrance in the via ferrata route from Vadu Crisului is through a very narrow and steep valley. It begins with the ascent on an inclined plane which quickly turns into a vertical passage.

The climbing movement on iron stairs and cable is like the movement of climbing a ladder.

Very important: when climbing do not find yourselves more teammates on the same section of cable.

In that situation, in case of falling the both people can be seriously injured. Also, when switching from a difficult passage you can call out to the team-mate who is behind you: “clear!”.

The trail continues with a vertical climbing. Slowly, slowly we rise above the forest level and we begin to see the river and railroad.

We cross a little sideways and enter the valley. Here the land is quite friable, so you have to have pay attention to rockfalls. There are few younger trees of which you can help in this area.

Finally, we reach a small regrouping platform, where you can rest or drink water.

From here the route gets out of the steep valley and enters in the wall, vertically.

The panorama is starting to be increasingly spectacular.

Still about 10 m vertical climb after which we get on a threshold where a second regrouping/pause can be made. Another vertical section challenges our abilities to climb on clamps. Perhaps the most difficult passage of the entire route follows this area.

It’s an easy beetle passage, where brute force has to be used so you can drag yourselves using hands.

We climb vertically about 10 m and finally we reach the top of the via ferrata route, the end zone. The view is extraordinary. Feel free to rest and admire the view.

A horizontal handrail helps us to get to the safe zone.

The most important safety rule when climbing a via ferrata route is the rule to ensure at any time in at least one lanyard.

If you climb via ferrata with special lanyard for via ferrata it is good to know that their disadvantage is that you can not rest leaving you weight on them (they elongate very much). For this reason it is good to have with you a third lanyard which will be used only when resting.

The way back from the via ferrata route from Vadu Crisului ca be done:

Week-end ideas: in the Vadu Crișului area the diversity of activities is very large.

For example one can visit a cave which is not arranged (there are many in the Pădurea Craiului Mountains). As adventure activities you can also do rappel, rock climbing, rafting on Fast River (Crișul Repede), via ferrata, or visit the show cave of Vadu Crişului.

If you want two days of via ferrata you can do: