Via Ferrata (“iron road”) situated in Vartop tourist resort at Pietrele Negre area offers one of those unique experiences especially for those who started practising adventure mountain sports. 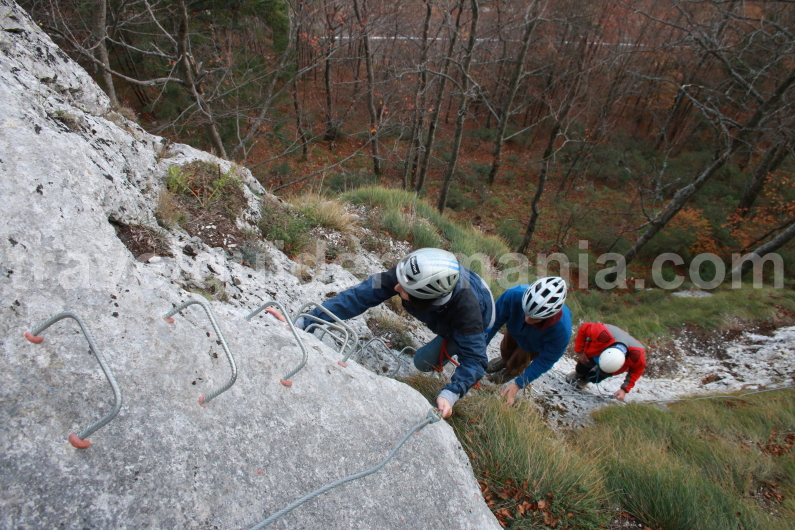 Although the via ferrata offers an accessible alternative to rock-climbers, safety rules are equally strict.
Advice: we do not recommend treading this route if you do not have vast experience in covering such routes, do not underestimate the difficulty of via ferratas.

Location: the via ferrata is found in Apuseni Natural Park at about 7 km (towards Stei-Nucet) before entering Vartop tourist resort and at about 6 km before entering the tourist route leading to the Groapa Ruginoasa tourist attraction. 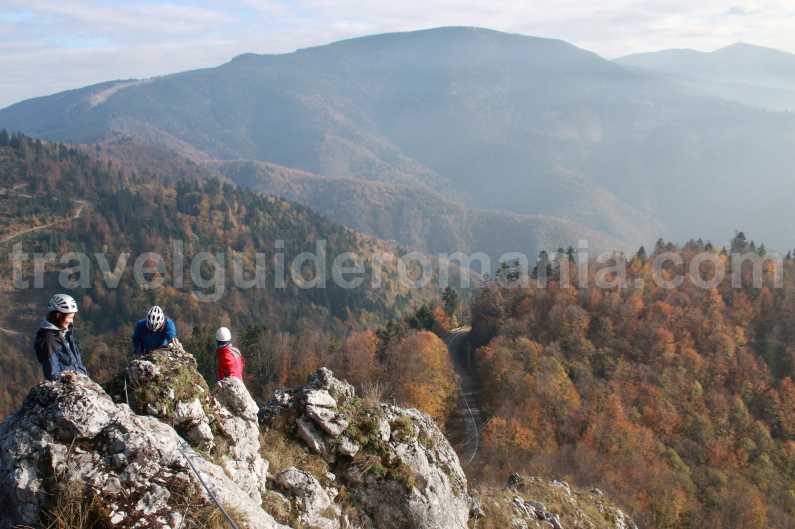 Access: you can get to the via ferrata from the red triangle tourist route that starts from DN75 national road. 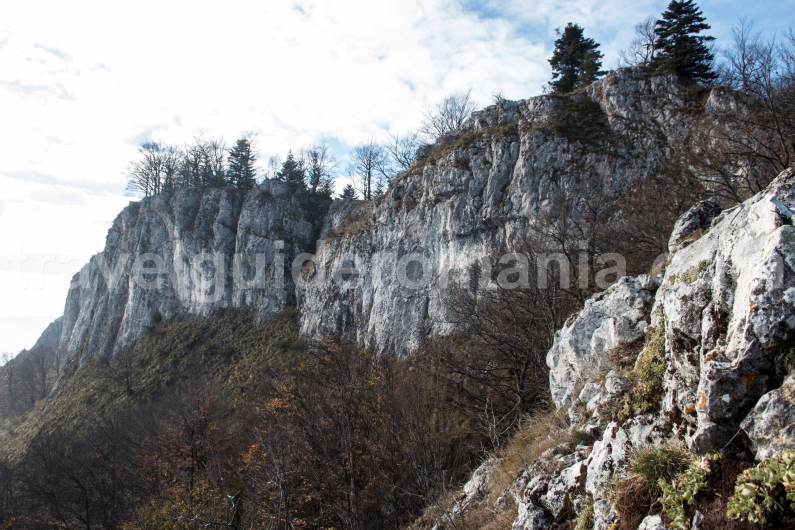 As you ascend to the area of the Pietrele Negre natural amphitheatre, you will have to pay attention to the red cross marker towards Vartop.

Although the tourist marker turns left, on a level curve, in order to reach the entrance to via ferrata, you have to follow the path which ascends towards the base of a ridge that you can see from the concrete road.

Once you got to the base, you will have to detour to the right. From this position you will be able to see the table which symbolizes the route entrance. 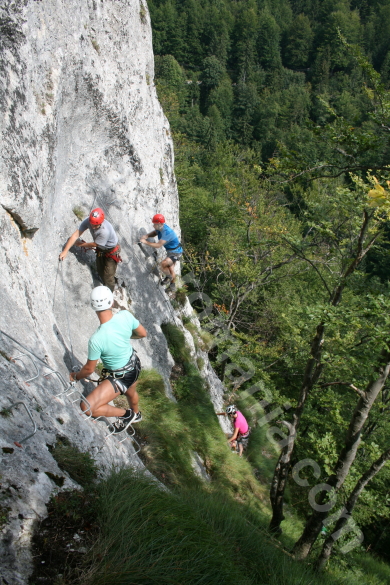 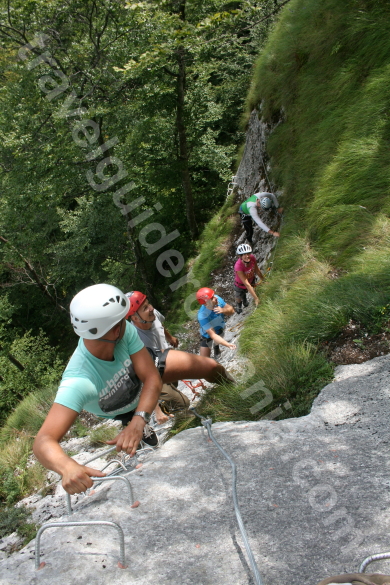 Necessary equipment: helmet and mountaineering harness with two safety lanyards. It is preferable that the two lanyards have special carabiners used for via ferratas.

None of the abovementioned pieces of equipment is optional. 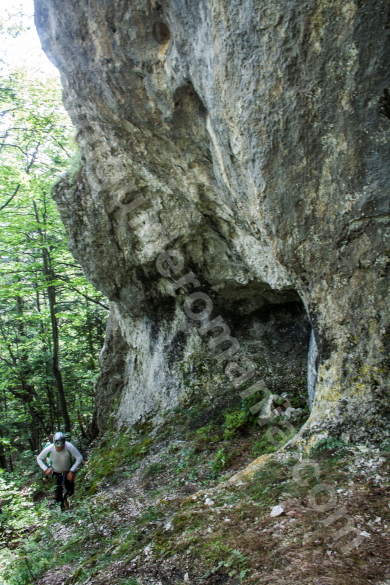 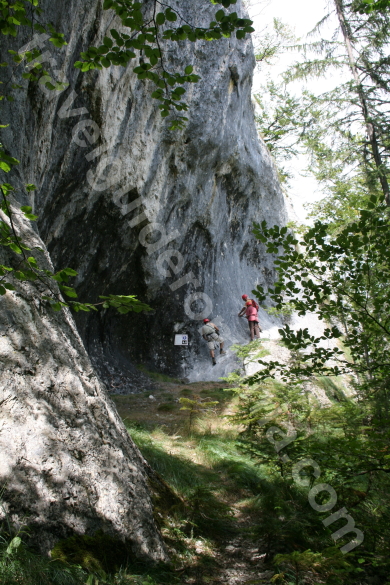 General information
The route is not technically difficult, but we advise you to appeal to an expert mountain guide, provided you are unfamiliar with such routes. It is recommended that the mountain-goers are not younger than 16.

Do not take a child with you unless you have advanced skills and vast mountaineering experience. In this case, it is recommended that you ensure the child’s safety by an extra rope or lanyard.

Treading duration: the necessary time can be influenced by the number of participants, their physical fitness and technical expertise. For an experienced team with advanced skills, it could take 1-2 hours. For an inexperienced group, it could take up to 3-4 hours. 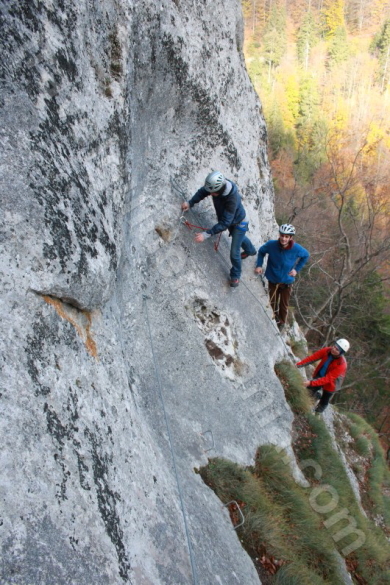 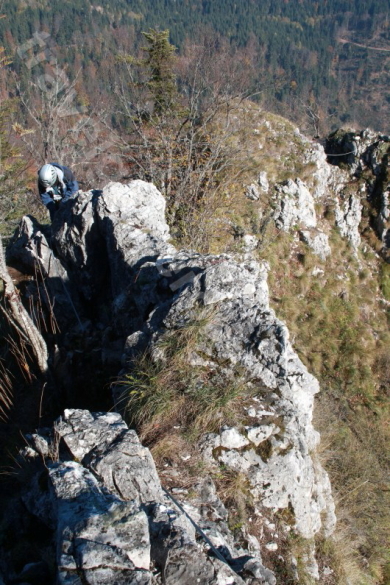 The treading method of via ferratas

If you haven’t trodden such routes before, you ought to know that the most important aspect is safety. By taking the equipment into consideration which is used in treading the via ferrata, everyone must be permanently ensured by at least one lanyard with a locked carabiner.

By using the metal rungs fixed on the route, you will have to ascend these and to make sure that you are permanently and firmly ensured to the rope which is ascending parallel to the metal rungs. The movement resembles that of climbing a steep ladder.

Treading the route starts with a short horizontal portion which changes its direction after a few meters in a vertical passage. The metal rungs fixed in rock allow comfortable movement both vertically and horizontally. After other two ascends you reach above the crown canopy of the forest. From here you can already see the road ascending towards Vartop tourist resort.

You are on a vertical wall. Owing to the metal rungs, you do not have to be a skilful rock-climber, making the via ferrata passages incredibly accessible for people of all ages.

You continue with a crossing on the left part of the route. After a 4-metre climb you will reach a 60-cm wide ridge. A beautiful panorama opens up in that moment towards the Piatra Graitoare Peak and towards Bihorul Peak, the highest peak found in Apuseni Mountains. 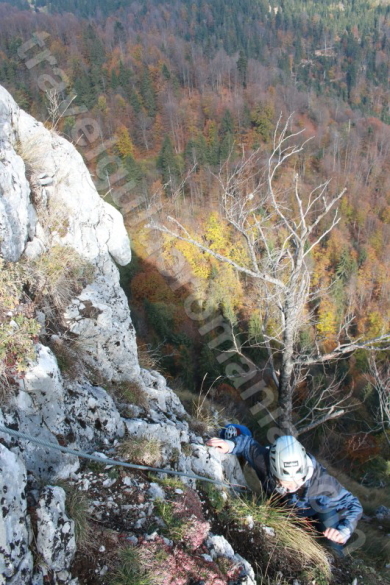 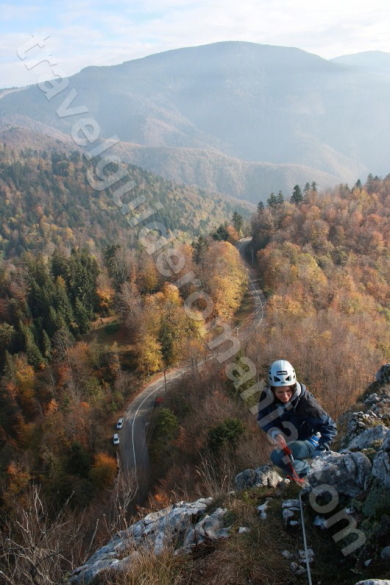 On the same ridge there is a beautiful climbing route of three rope lengths with a technical difficulty of 2A. The via ferrata continues for another 100 m on this ridge.

The comeback from the via ferrata route is made by following the same route for about 50 m until you reach a steep and narrow valley extending into a forest. The terrain is pretty steep here, so hiking boots with hard soles are helpful. Follow the path near the rock wall and you will reach the concrete road. 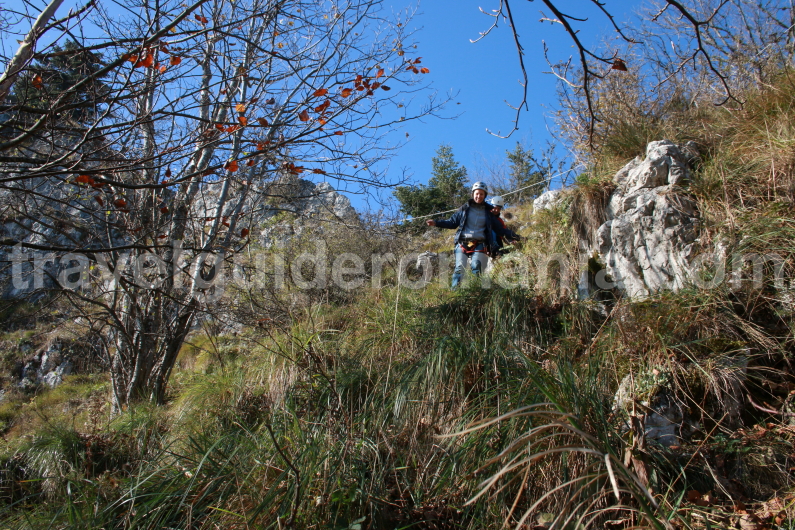 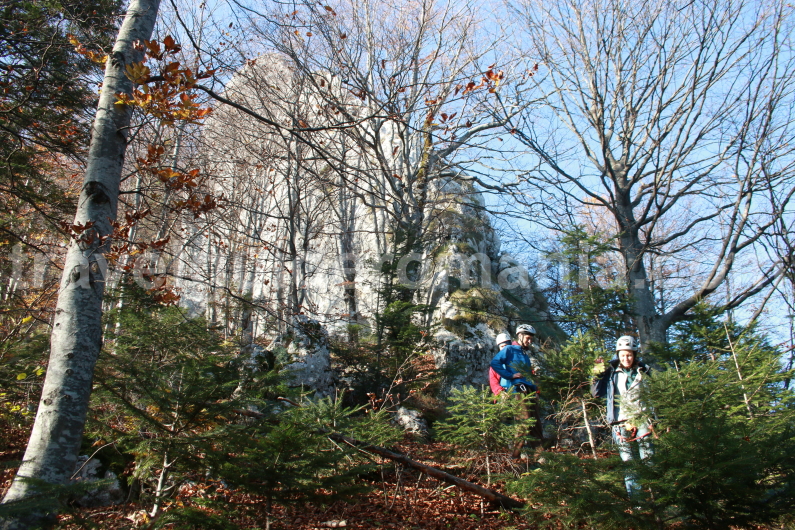 1. Never unlock the carabiner until you make sure you mounted a second lanyard on the cable.
2. Never allow more persons to tread the cable at the same time. If so, in case of a fall, you might end up hurting yourselves and your fellow partners.
3. Regarding the equipment, it’s good to know that the lanyards have to be made of dynamic rope to absorb energy and attenuate a possible fall. An improper lanyard may break in case of a great fall.

If you practice climbing, you can combine the via ferrata route with the ascension of the abovementioned climbing route. 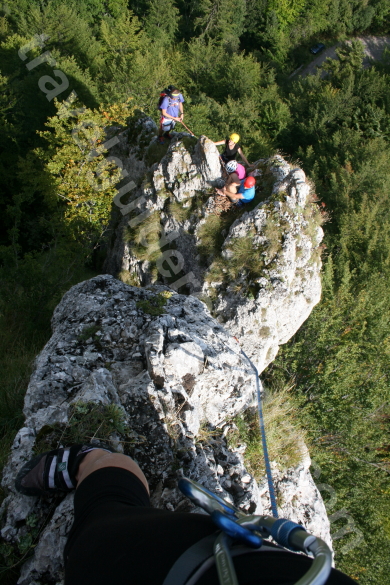 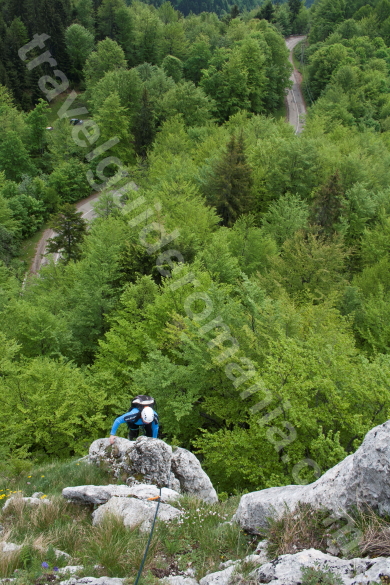 Necessary equipment for alpinism: 15 loops equipped with carabiners + 2 half-ropes of 30-40 m. The route can be trodden in boots; climbing boots are optional.

There is only one passage that might pose difficulty on the third section of the rope (head-rope). You can also bring trekking poles with you. Regroupings are equipped with plates and links tied together by a metal chain. 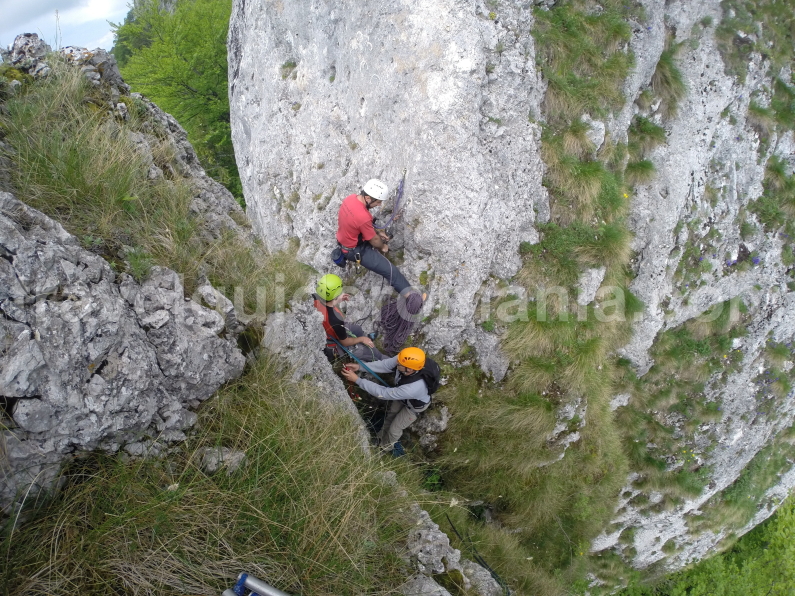 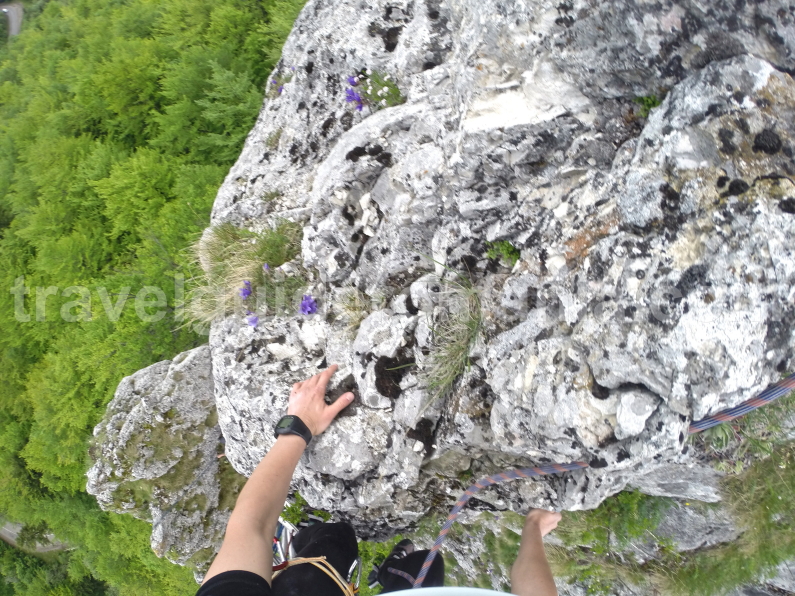 The route is not technically difficult, but it offers an impressive perspective on the surroundings. The comeback from the climbing route can be done through the via ferrata or rappelling from regrouping no. 2 through a steep, narrow valley. The latter is equipped with escalading plates so that it may be trodden on ascension as escalation. 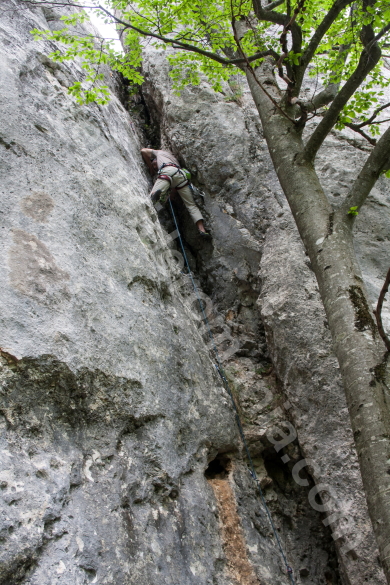 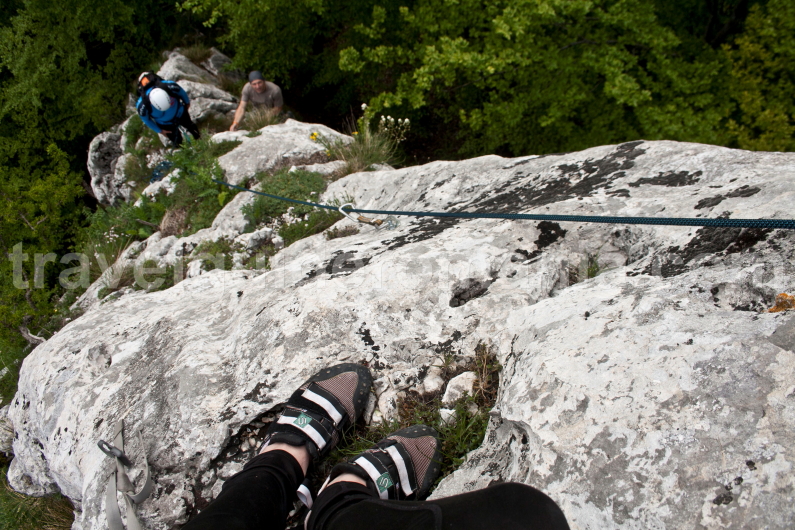 For guidance trips or equipment rental please contact us.