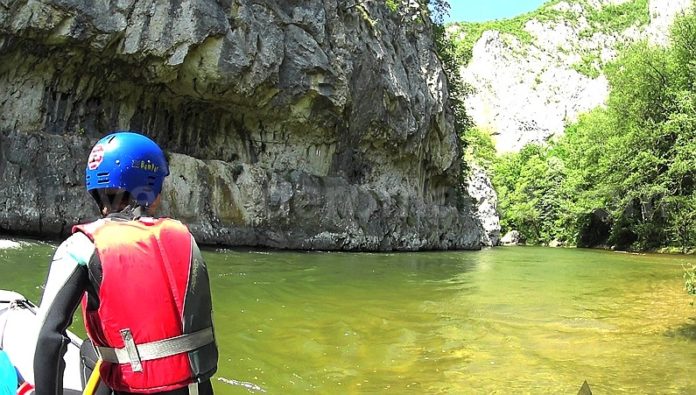 Cheile Nerei are the longest and wildest gorges in Romania, with a length of about 20 km.

The Nera River, which springs from under the Semenic Mountain, flows into the Danube, after 133km. Here, it forms a small delta – Balta Nera Danube reservation that belongs to the Natural Park Porţile de Fier.

All along Nerei gorges there is a red line marked trail. Even if the walls are no higher than 200-250 m, and the narrowings can be up to 20 m. The gorges are spectacular and wild. Nera river meanders between the calcareous walls – named in Banat “cârşii”. 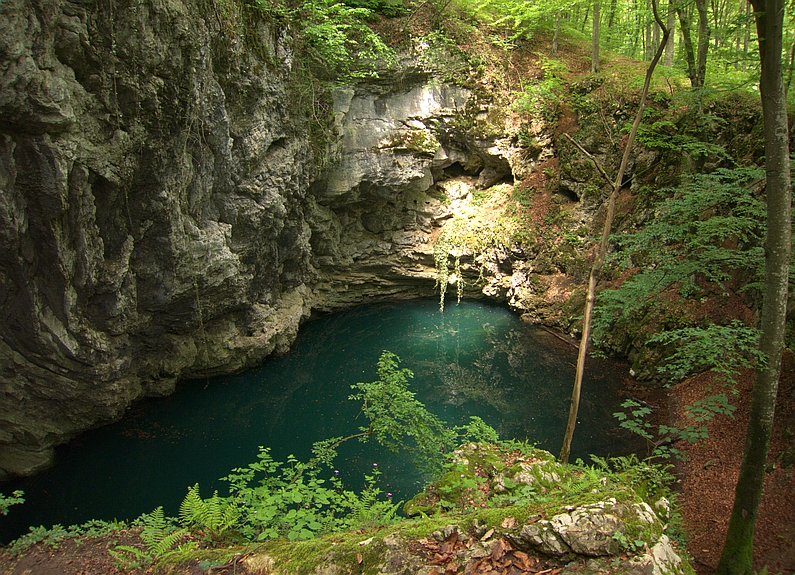 The gorges can be done either from upstream or from downstream, the elevation gains being almost the same from any direction.

Thus, the Nera at Sopotu Nou is at about 200 m altitude and near Sasca Romana, the Nera river reaches an altitude of 150 m.

Due to its length, the gorges are difficult to be done in only one day, especially if you wish to do a circuit journey.

For tourists, the gorges are divided in two by the Beiului Valley, an affluent of the Nera River.

The main access point in the Natural Reservation Cheile Nerei – Beusnita is near the outfall of Beiului River into the Nera. The place is known as the Podul Beiului (the Beiului Bridge).

Sasca Romana and Sasca Montana Villages are the place where many tourists begin their hiking. You can find here many guest houses.

Sopotu Nou Village is used as a starting point especially by those who want to raft along the Nera River in their rafting boats. The only possibility for staying overnight is in your own tent, in the glades near the Nera River. For camping, ask permission from the inhabitants first.

Eastward from the Beiului Valley, the tourist trail that goes along the Nera River upstream, follows in the beginning a 5 km forest road up to the former Damian Forest House. For those who are carrying a tent, they will find here a place to camp.

From here to Dracului Lake (Devil­’s Lake) you will find the most spectacular part that may take you about 5 hours. The trail either climbs on the rocks, or surrounds the pointed rocks. It goes through rock dug areas or footpaths equipped with cables and even through tunnels.

At about 1 hour from the Damian Forest House, you will have to pass through water (the only passage of the kind) near the area La Cârlige. Thus, the path switches from left to right.

It is advisable to have a pair of mountain sandals or sneakers as the rocks on the bottom of the valley are slippery. In general, there should be no problem in crossing the river, as it is a large space and the current is not strong here. Nevertheless, avoid crossing it after rainy periods.

In fact all the gorges are better not to cross after rains, as many parts of the path can be under water.

You will come across a suspended footbridge, in a very poor state. It is not necessary to cross the Nera River here as the path stays on the left bank.

The footbridge leads to a glade – La Vogiun. At 1 km upstream the bridge, you will find here the shelter with the same name. There is also a good camping place.

At about 1 hour from the Vogiun footbridge and 5 hours from the Damian Forest House you will arrive at a trail crossroad. The place is known as „La Scaune”

Dracului Lake is hidden in the middle of the forest near the Nera River. The lake has a special charm due to one of its banks which is rocky and overhung as well as due to its changing colors, depending on the light that goes through the tree branches. The lake was formed after the collapsing of a part of the nearby ceiling cave. It is a cave of only 70 m long without speleology formations.

Dracului Lake is one of the biggest karst lakes in the country with a diameter of about 25 m. The depth of the lake is 13 m being supplied by the Nera River waters and rains. You can camp near it or opposite, on the right bank of the Nera River.

Between the forest house Damian and Dracului Lake there are 2 springs. One at about half an hour from the forest house. The other one, Izbucul Iordanului a little bit more upstream the suspended footbridge on the way to the Vogiun Glade.

For those who want to go back from Dracului Lake to the Sasca Montană Village there is here the possibility to do a circuit.

From the crossroads “La Scaune” you can go up to Cărbunari, on blue line. There is a 1:30-2 hour journey until the forest road. The road links Sasca Montană to Şopotu Nou in Poiana Logor, 2 km from Cărbunari. From the end of the Carbunari village continue on blue cross till Sasca Montană (another 2 hours). This trail passes by another renowned place in the area, the Gorges and the Waterfall Susarei.

From Dracului Lake up to the Şopotul Nou village there are 7 km, the trail has two journey variants. You can either go on the left bank or the right one, climbing back to the crossroads “La Scaune”.

Cross the Nera on the new footbridge, into the Meliug Glade (Trifu’s Glade). It is here that you will meet the variant that comes from the Dracului Lake, on the right bank. Beyond the glade, the trail will come out of the narrowness of the gorges. It’s continuing on through the glades and the households of the inhabitants of the Dristie Hamlet. Now and then you will have to go through the inhabitants’ gates, it’s better to close them after passing by.

The last 2.5 km the trail becomes a narrow road you can cross by car. If you wish to camp in one of the glades you cross, ask permission from the inhabitants first.

During springtime the glades and the forests are filled with flowers. In April, you can even see the spotted tulip, an endangered species.

Just as in the Danube area, you have to pay attention to vipers.

For those who think that crossing the Gorges takes too long, you can choose to do only the area that is situated westward of the Beiului Bridge. The trail starts at the bridge. 20 meters further you enter a rock dug tunnel, the first of the seven tunnels.

The longest is 40 meters. The tunnels can be easily crossed; all you need is a flashlight. Between the tunnels, the trail is suspended at about 15-20 meters above the Nera. In order to feel safer, some areas are provided with cables.

The area “La Tunele” (The Tunnels) takes about 30 minutes to cross, then the trail goes down to the river. It is said that the tunnels were dug during the Turkish reign in Banat. They wanted access for their troops to the border. 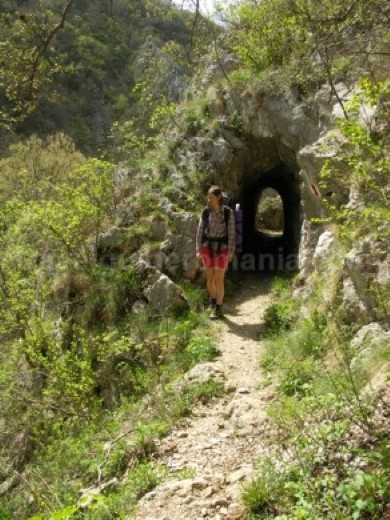 The red line trail crosses the Nera on a suspended footbridge and goes to the Sasca Romana Village (around 1-1:30 hours from the Beiului Bridge).

Before crossing the Nera over the suspended footbridge you can make a detour of 500 m upstream, up to the Casa Verde (the Green House), a clay house. There are courses held here on how to build a clay house, in harmony with nature.

This portion, between the Beiului Bridge and the Sasca Română Village, can be crossed by the experienced ones, by mountain bike. You can combine the tour with other trails in the National Park Cheile Nerei-Beusnita.

Rafting in the Gorges.

During spring time, the gorges are the place to be for the rafting lovers. The Nera is best for the beginners.

After rainy periods, when the Nera flow is high, you need extra attention and quick reactions. There are many obstacles to avoid, rocks, fallen trees etc.

In normal conditions, the journey is quite smooth, with areas where the waters are deep, giving you time also to admire the fauna around you. You can come across wild ducks, egrets, otters, dragonflies etc. as well as plants specific to the sub-Mediterranean climate (the lilac, the Turkish hazel, the Oriental hornbeam, the smoke bush).

Launching/landing the raft on the Nera.

If you choose to come with your own raft you must consider the difficult access by car.

If nobody can leave/take you from the launching/landing place, a possibility for active tourists is to combine rafting and cycling. For example, if your accommodation is in Sasca Montana drive to the launching place and after rafting on the Nera come back for your car on mountain-bike.

The cycling tours around the Nera area allow you also to know better the scattered villages on the slow tops of the Locvei Mountains.