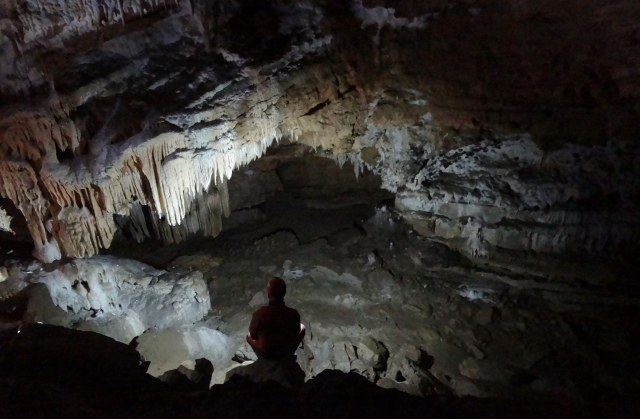 With a length of 6203 m, an elevation difference of 100m and a three-storey development, Comarnic Cave is undoubtedly one of the top three most important caves in Banat. Its attractive aspect, given by the plethora of formations and the accessibility of covering its ground, are the elements that make it well-known among the tourists.

Although there is no electrical system, the guide will provide you with sources of light and helmets for your safety, making it the most authentic caving experience you will ever perceive.

Location: the cave is found in Caras Severin County, in the Semenic-Cheile Carasului National Park in the Comarnic special area of preservation on the Cleantul Putnata Hill, at the altitude of 440 m. It is good to know that Caras Severin County is the third largest county in Romania and is the first on in terms of acreage of the protected natural areas, national parks, natural parks and protected areas.

from Resita (DN 58) – Resita > after about 8 km turn towards Iabalcea Village > another 3.5 km until Iabalcea > another 10 km on the forestry road leading to Comarnic Cave.

As you are passing through Iabalcea Village, it is good to know that this settlement was established by the Croatian colonists that colonized the area during the Austro-Hungarian Empire. For a long period of time, the community was reticent in allowing marriage outside of the members of the community. At present, the Croatian state acknowledges them, thus all citizens have double citizenship.

The road between Iabalcea and Comarnic Cabin is quite bad, especially when it rains. We suggest driving an off-road car. You can reach Comarnic Cave coming from Resita or Gura Golumbului Lake on the tourist route with a blue stripe marker or coming from Carasova on the route with the blue triangle marker. 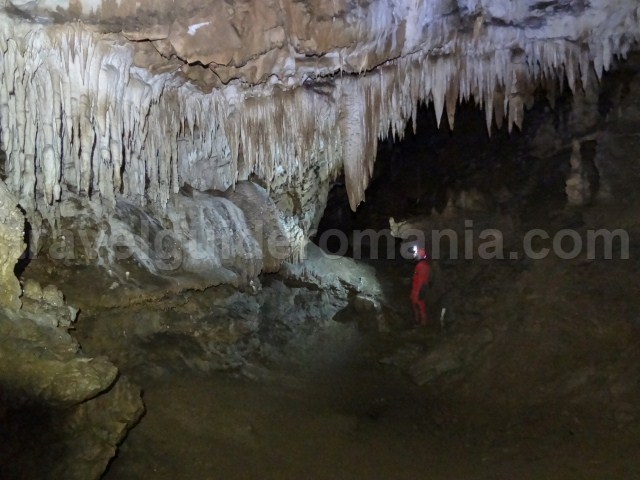 Tourist access in the cave: the access is ensured by the guide working for the National Park. Since the beginning of April until October there is permanent touristic guidance. For the rest of the year there is touristic guidance only Saturdays and Sundays.

If you decide to visit during the low season or week days, we suggest calling and booking the visiting hours with the guide. There is a minimum of 5 persons per group. Because there is no service near Comarnic Cave, it is advisable to call your guide when you are still on the road near Carasova or Resita.

General information: once you reach the country road near the brook which springs from Comarnic Cave, you will be able to park near the former Comarnic Cabin. Unfortunately, it is closed and no longer functioning. You will have to climb the stairs near the information panels leading to the entrance of the Comarnic Cave.

A metal door hinders the access for those who want to enter without a guide or without permission from the Park’s Administration. 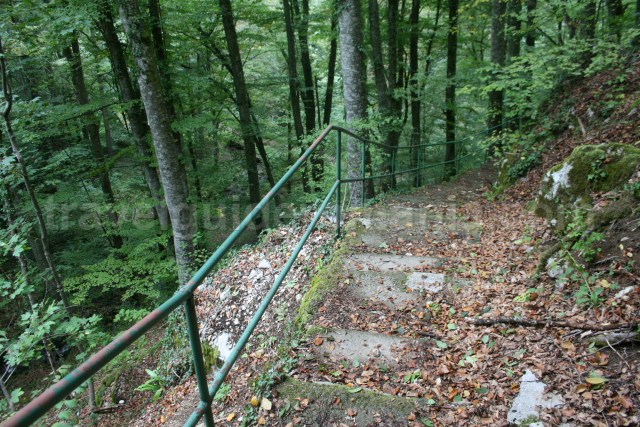 Accommodation and camping: because the entrance of the Comarnic Cave is found on a solitary valley with difficult access and bad infrastructure, there aren’t many options for accommodation near the cave. You can find accommodation only in Iabalcea Village or in a cabin in Poiana Comarnic. There you can encamp as well.

Research history in Comarnic Cave: the cave was discovered in 1896, but the discoverer was never mentioned. Due to the relatively easy access to the cave and inside it, this cave was one well-researched.

In 1912 the first study in Geology by Z. Schreter takes place. Studies in bio-speleology are published, one of the authors being Emil Racovita’s colleague – R. Jeannel. The first map of the cave was made in 1939 by E. Balogh.

In 1947 the cave was declared a natural reserve by the Romanian Academy; shortly thereafter a gate was erected. In 1980 the cave was undergoing development work; underground access was only possible with a guide. In 1981 the cave reached 5200 m in length, being one of the biggest caves in Romania.

Since 2000 Comarnic Cave entered the Semenic-Cheile Carasului National Park zone, and in 2002 there was a permanent guide for underground sightseeing.

General information about the cave: Comarnic Cave is 6203 m long and it has an elevation difference of 101 m. It was formed by the waters of Ponicova Brook. Formerly, this water-flow had a different route and it flowed only above ground.

Once Carasului Valley and Comarnic Valley deepened, the water from Ponicova Brook gradually went underground, engendering a network of underground gaps. Firstly, the waters formed the two caves, Ramonei Cave and Popovat Cave, fact that can be attested through hydrological studies.

In the meantime, the water-flow left the two caves and exploited other geological rifts, leading to the formation of five potholes of small sizes and to Comarnic Cave, which has an entrance (Popovat) and an exit (Comarnic). The last phase of the geological development of the cave can be considered the formation of a new gallery that is exploited by the underground brook; these galleries are 90% insurmountable for man.

The developed area of Comarnic cave: the touristic development of the cave is 1750 m long. The paths destined for the visitors have been marked with stripe and some places have wooden steps, ensuring minimum level of comfort. There is no electric lighting – you will receive individual helmets at the beginning of the tour.

The tourist route leads the visitor in the fossil storey of the cave, through the corridors of impressive sizes that intersect chambers such as Zebrelor Chamber, the Big Chamber of Blocks, the Clay Chamber, and the Dome Chamber. Within a short distance from the Dome Chamber there is the second entrance of the cave – Ponicova.

The cave is visited by entering through Comarnic entrance and exiting through Ponicova.

The scenery in Comarnic Cave is slightly altered by man and it has a natural underground view, considering that the site has been visited for the last 100 years. The peculiar characteristics of the cave are: Fossil Galleries of great dimensions (20 m wide, 10 m high) where the sloped areas with horizontal ones alternate, galleries alternate with chambers, areas with hollow rock alternate with areas heavily petrified.

The formations are of great sizes and they are diverse.

The Active Galleries (where the underground brook flows) are of small dimensions (1-5 m wide, 1-2 m high). The permanent water-flow deluges 25-100% of the gallery.

A general characteristic of the cave is the layers and lumps of flint of black color alternating with white limestone. On the cave’s tourist track, you will encounter exhibits of the former inhabitant of the caves – Ursus Spealeus.

Paleontological studies have shown that these animals did not inhabit the Comarnic Cave but other caves nearby (e.g. Popovat Cave, Exploratorii Cave).

The visit in Comarnic Cave lasts 2 hours and a half.

Visiting the cave as speleologists demands a notice from the Park’s Administration. Because it is a complex cavern, developed on three storeys, it is better to have an experienced team leader.

Complete covering of this cave demands equipment for horizontal caves: boots, coveralls, undergarments and the helmet with a source of light.

Concerning the speleologists, in the zone encompassed by Banatului Mountains there is the most compact karst area in Romania with a surface of 800 km2. Near Comarnic Cave you will find a series of interesting caves such as Popovat Cave, Exploratorii Cave (5172 m), Buhui Cave (6547 m) and a series of potholes which unfortunately do not exceed 100 m deep.

Other interesting sightseeing objectives near Comarnic Cave: approximately 150 m near the Comarnic entrance the is the Comarnic Gorge – if you travel the entire distance you will intersect with the end of the Carasului Gorce – 19 km long.