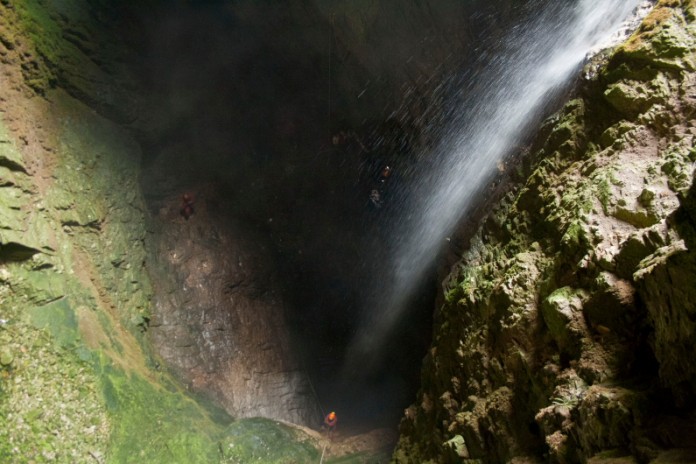 The Campeneasca cave is one of the first Romanian caves described in the travel literature. The description dates back to 1863 and was published by Adolf Schimdl, a Viennesse professor and explorer, in his book ”Das Bihar Gebirge (Bihor Mountains) an der Grenze von Ungarn und Siebenburgen”.

The stream crossing the Izbuc village, passes through the cave’s 20m portal, then disappears underground through an impressive 35m waterfall. The Campeneasca cave is the most important and most spectacular cave in the Codru-Moma mountains.

From a karstic perspective, the Vascau Plateau is the most interesting of these areas. It covers about 90 km2. The exokarstic relief of this karstic plateau is formed of dolines, uvalas and lapies. From a geologic point of view, the Vascau Plateau is made of carbonate rocks (limestone), which means that rivers are usually missing from this area. The only exception is the permanent stream flowing along the Tarina Depression (north to south) which disappears underground into the Campeneasca Cave.

Localization and access: The Campeneasca Cave is found on the eastern side of the Tarina Depression. This depression is a closed basin, located between the Câmp and Izbuc villages at an altitude of 415m. To get to the cave, one must first get to Cărpinet commune on the Vaşcau-Deva road (D.N. 76 road).

From here, take the smaller road that goes over the ridge to get to the Izbuc-Ponoarele village. Then make a right turn (towards north) and enter the unpaved road which passes very close to the cave. If you want to visit the cave, you can leave the car here, only 150m away from the cave’s entrance.

History of explorations: In 1866, a few years after the publication of Adolf Schimdl’s book, E. Kery makes the first hydrogeological study of the Codru-Moma mountains. Later, in 1901, geologist S. Mihutia makes here, in the Vascau Plateau, what is probably the first hydrological tracer test in Romania.

Using charcoal in his experiment, he showed that there is an underground connection between the Campeneasca Cave and the Boiu karst spring, which is located close to the center of Vascau town. In this test, it took the tracer 4 hours to cover the distance between the two cavities (there is a 1700m aerial distance and 106m elevation difference between the two points). 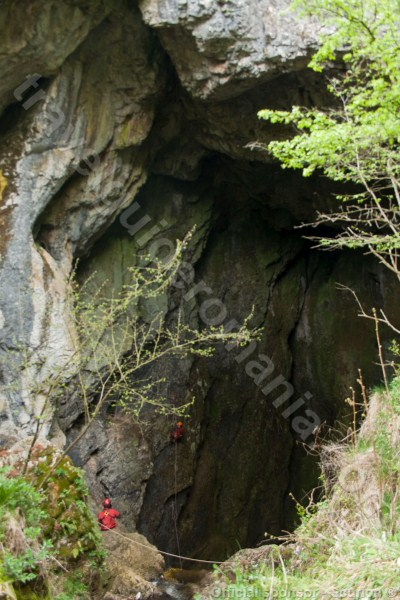 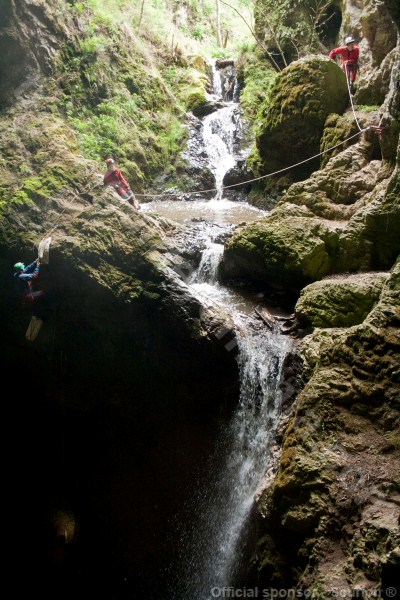 A second hydrological tracer test in this area was done in 1978 by another geologist, Iancu Oraseanu. This time it took 10 hours for the tracer to cover the same distance. The difference between the results of the two tests was due to the water flow rate, which was much lower when the second experiment was performed.

The first known speleological exploration of this cave took place in 1968 and was made by professor Iosif Viehmann, geologist Teodor Rusu, M. Şerban and M. Alb. In 1971, Gyuri Ciurea was lowered into the cave on a rope. The active gallery was surveyed up to the terminal siphon. The length of the surveyed galleries sums up to a total of 534m. 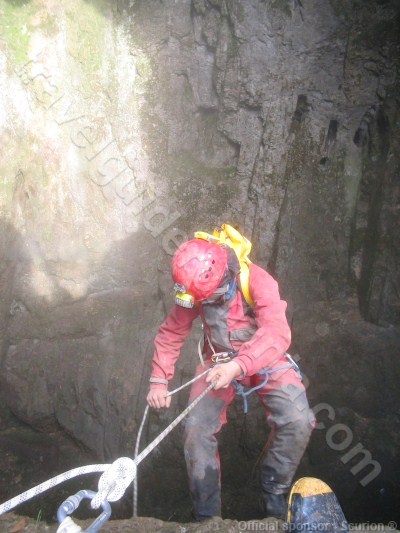 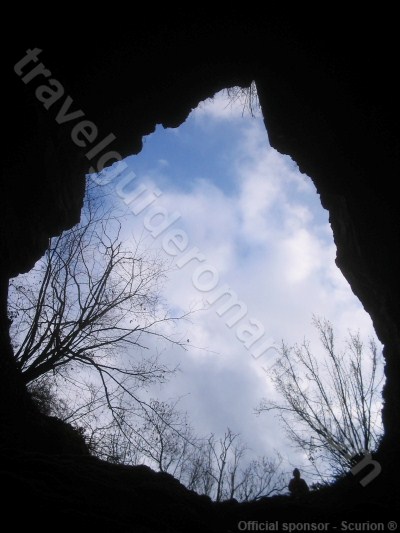 In 1975, the speleology clubs Speodava Stei and Liliacul Arad resume the exploration of the cave. Between 1976 and 1979 are discovered the upper galleries, fossils of the underground network. Following the survey, it was determined that the Campeneasca Cave has a length of 1636m and an elevation difference of 68m.

Cave description: the cave has 3 entrances. The main entry (at 395m altitude) into the cave is through a 20m high and 10m wide portal after which there is a 35m vertical drop. The stream flows through this portal and drops over the overhanging wall in an impressive waterfall. To avoid getting wet when entering the cave, the absil down to the plunge pool is done on the side of the waterfall. 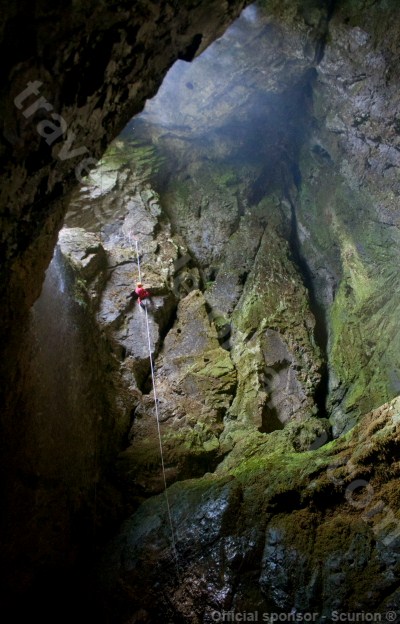 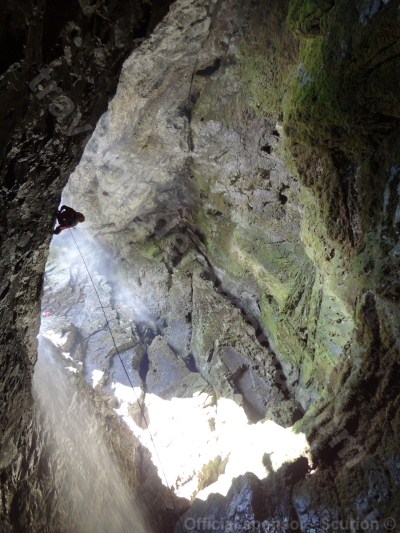 To the left of the portal, at an altitude of 415m, is a pit serving as a secondary entrance into the cave. If using the secondary entrance, you have to go through a 10m-deep pit and a few short galleries before rejoining the part of the cave accessed through the main entrance.

From this plunge pool starts the horizontal part of the cave. The stream first flows through a 20m-long elongated chamber with a high roof. After this chamber, the roof of the cave is about 6m high throughout the entire gallery.

On average, the winding gallery is 4m wide, but the width can go up to 10m at bends or where the gallery is crossed by geological faults. Throughout the entire cave, on the bottom 3.5m of the walls, there is evidence of three different erosion levels.

Altough this is an active cave, in the first part there are stalactites and a few spectacular draperies located in the roof or in the cave walls. 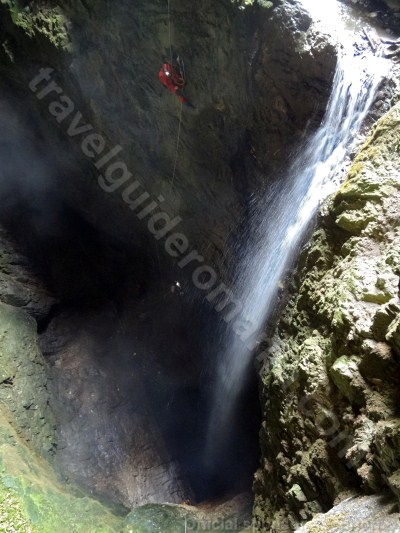 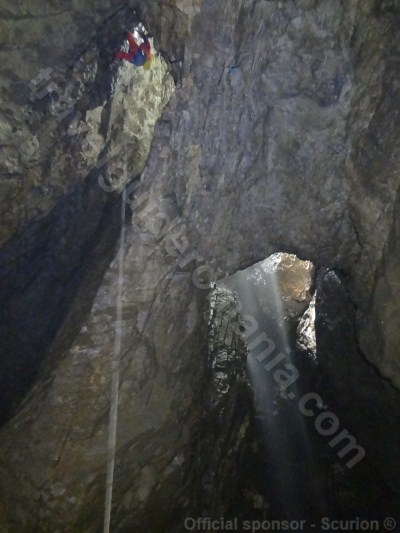 The second part of the cave has certain characteristics that indicate the gallery used to be completely submerged. Here can be seen alluvium or other material deposited by water, evidence that the water level can rise up to 3.5m during floods. The cave ends with a lake due to a drop in the roof level from 7m high to water level. Further down the gallery cannot be explored because its cross-section is too small.

Only the water continues past this point and eventually comes back to surface through the Boiu karst spring. The active gallery has a very low stream gradient, dropping only 8m in elevation over its 400m length.

During exploration times, in a winter when the water level was very low, some members of SpeoLipova club entered the gallery of the old siphon and claimed that they were able to advance for about 800m. However, the gallery remained unsurveyed.

Natural reserve: the hydrologic system formed of the Campeneasca Cave and the Boiu karst spring is a speleological preserve included on the list of national protected areas of Romania. The protected area has a surface of one hectare. According to the classification used by the International Union for Nature Conservation, this is a category III protected area.

From a biospeleological perspective, the fauna is represented by Biharoniscus racovitzai, a terrestrial cavernicolous isopod from Romania. It was also noticed the existence of a bat colony in this cave.

Cave deterioration: given that the stream that enters the Campeneasca Cave previously passes through the Izbuc village, a lot of household waste from the village ends up being collected in the cave. This terrible situation is easy to imagine just from looking around at the cave’s entrance where there is a lot of garbage in the stream. 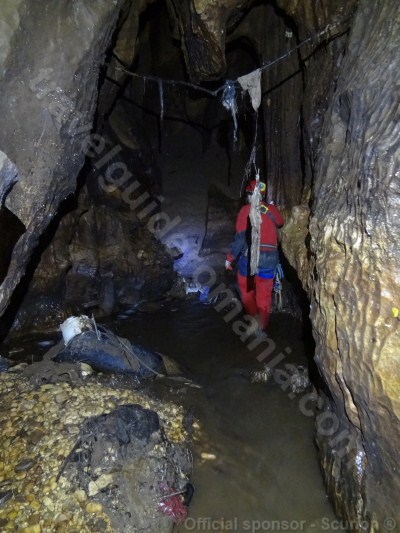 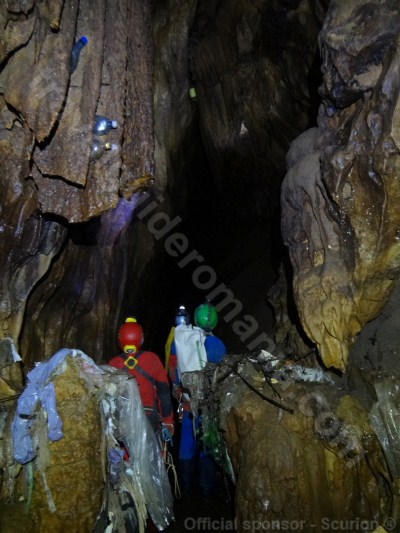 At the base of the waterfall, there is a big pile of plastic bottles. Going forward through the cave’s horizontal gallery, it can be seen how the limestone formations get lost among piles of bottles, plastic, cloth and tires. Truly shocking is the two-meter-thick layer of plastic bottles that fill up the room with the terminal siphon.

A cleanup of the cave was attempted in 2008 in a project involving the National Environmental Guard. Unfortunately, after the garbage was collected from the cave, it was left near the portal at the cave’s entrance. Eventually, part of this garbage ended up again in the cave.

The environmental disaster from the Campeneasca Cave can probably be undone only if the local community is educated not to dispose of the household waste in the stream.

However, as long as the local community does not have an economic benefit from the cave being clean, the current situation is not very likely to change. Obviously, neither the water from Campeneasca Cave, nor the water from Boiu karst spring is drinkable.

Required caving gear: this is a cave with a vertical drops at the very entrance into the cave. You must know the proper caving rope technique for such situations. Of course, it is mandatory to have a helmet, head mounted light, overalls, boots, harness, descender, ascenders, rope and bolt hangers.

This cave is bolted, but you will have to bring along bolt hangers and maillons or carabiners.

Approvals needed to visit the cave: at the moment, access in this cave is allowed given that you follow the procedure concerning caving in Romania. You will have to get approval from the Speleological Patrimony Comission and from the local rescue service (Serviciul Judetean Salvamont Salvaspeo Bihor).

If you come to this area, do not hesitate to also visit the monastery in the Izbuc village. There are also other caves in the area, such as the Cremenis pit cave, the Rastet pit cave or the Iliei pit cave, but these are not as spectacular as the Campeneasca cave.