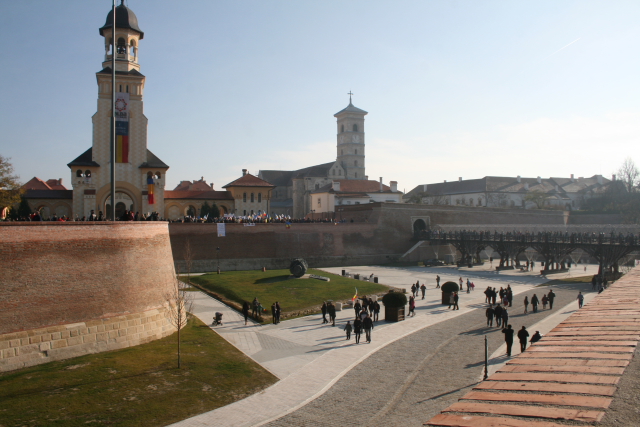 One of the most important cities with historical significance in Romania is Alba-Iulia.

The most notable event that took place in Alba Iulia was undoubtedly the Great Union of all the Romanian provinces on 1st of December 1918, resulting in the state of Great Romania.

Toponymy: we find the same settlement under different names: Apulum (during the reign of the Roman Empire), Alba-Iulia, Balgrad (Mediaeval times) which translates into Alba Fortress, Alba Carolina, Weissenburg, Gyula-Fejervar.

Location: Alba Iulia City is found on the confluence between Mures River and Ampoi River at the foot of the Aiud Hills. It is the county seat of Alba County.

General information: during the Roman administration, they established a fortress, and the city was named Apulum and it was the county seat of Apulenis administrative territory. After the Roman Evacuation in 271, its historical attestation was once more documented in the eleventh and twelfth centuries. It will later become the capital of the Romanian Principalities under the reign of Michael the Brave.

On the occasion of the National Day of Romania on 1st of December, if you happen to visit Alba-Iulia, we recommend that you find out beforehand the scheduled events. There are interesting events in which you can partake: laying funeral wreaths on different objectives, observing the guards’ shift switch according to the Austro-Hungarian custom taking place daily at 12:30 p.m.

In front of the Catholic Cathedral, folk concerts from different parts of the country, military parades with soldiers dressed in specific uniform according to historical periods.

On the occasion of the National Day, you will notice a wide range of traditional outfits from different parts of Romania and you can taste the traditional dish offered free of charge by the municipality – beans with sausages.

Recommended journey – Alba-Iulia Carolina Fortress – is the biggest and best preserved medieval fortress built in the style of Vauban in Romania. In 2009-2011, it was subjected to restoration, receiving its olden aesthetics. Within the project, even the western part of the fortress was restored, a part which was once willingly bombarded in 1921 in order to build the Orthodox Cathedral. Along with the project, the defence ditch (which in historical times was filled with water) was completed, and bridges to enable access over the ditch were built.

Alba-Iulia Fortress, in its initial form (sixteenth century), was erected on the old site of the Roman Castrum and was square-shaped. In 1712, after the Austro-Hungarian Empire conquest of the Ottoman army, the Empire wanted to secure its reign in Transylvania. They build a new, stronger fortified fortress.

In this period, the population is relocated in order to expand and build the fortress. Few of the existing structures in that perimeter were salvaged. Among the few is the Roman-Catholic Cathedral, but the church built by Michael the Brave was destroyed.

The new fortress now with seven bastions incorporates some of the old walls of the medieval fortress and the Roman Castrum. The surface is of 70 acres and the Fortress was built by the orders of Charles VI of Habsburg and by the plans of the architect, Giovani Visconti. The fortress is star-shaped fort and has four baroque access gates that were embellished with statues marking the glory of the Austro-Hungarian Empire.

Visiting Alba Carolina Fortress is free of charge on most areas. There is a parking lot near the main access, near the western gate. In order to visit this sightseeing objective we suggest investing at least half a day. If you wish to visit the History Museum inside the Fortress, you will undoubtedly need an entire day to see everything.

Fortress Ditch tour – we recommend touring the Fortress ditch between the 7-8 metre high walls. Numerous bars and restaurants are open all year round, making your long walk more enjoyable. The walking streets and the minute urban development will carry you to olden medieval times.

Tourist route of the Fortress’ walls – The route of the three fortifications – although visiting this part of the Fortress means paying 10 RON, we highly recommend you do not miss it. Besides the sightseeing spots that you will encounter along the route, there are other touristic objectives. You can either hire a guide (you gain access in the indoor areas of the monuments) or not (only the exterior route) – the pricing is the same in both situations.

Near the ravelin, despite the changes in terrain due to the Alba Carolina construction, in the present shape, Roman settlements were found overlapping with the mediaeval settlements. The vestige from Roman times offer pieces of ceramics, animal bones and coins.

You will undoubtedly be impressed by the Artillery Platform where three functional epoch cannons are still in use. Saturdays at 12 p.m. the cannons can be watched as they shoot in the honor of the ascension of the Alba-Iulia flag on the Alba Carolina Fortress wall.

The coat of arms of the House of Habsburg is shown on all the gates of the fortress, in the honor of those who built such impressive monument.

Visiting the precinct of the Alba Carolina Fortress – Catholic Cathedral – the most important building built in the Roman style in Romania. The maximum length of the building is of 70 m (without gothic choir added later), and the maximum width is 25 m. 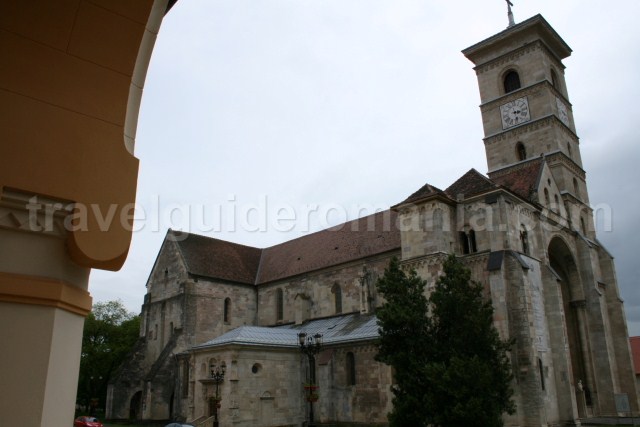 From the cornerstone set in the eleventh century until now, the building went through extensive changes and expansion, the last being in 1728. Due to the long construction periods, we can distinguish the influences of this architectural wonder: Roman, Gothic, and even Renaissance (Laszai Chapel).

In its present shape, the building is composed of three sanctuaries built in the Roman style, and the arch has Gothic elements. The semicircular altar is built in the Gothic style. The rosette, specific to Gothic cathedrals, is found on the southern part of the transept. Here we find the gate made for the bishops’ access inside the church.

The majestic access through the main gate of the cathedral was embellished in the early Gothic style. Above the entrance, there is an organ built in 1877. The famous John Hunyadi was buried in this cathedral.

The Orthodox Cathedral is also known as “Cathedral of the Unity of the People” (Coronation Cathedral) because it was built on the occasion of King Ferdinand’s and Queen Mary’s crowning as rulers of Great Romania in 1921-1922, after the Great Union in 1918.

The entire architectural ensemble, the cathedral and the annexes, are found in the western part of Alba-Iulia Fortress, in the proximity of the Catholic Cathedral. The symbolism of this location is all the more powerful as it was built on the foundation of the first church built by Michael the Brave in 1597 on the occasion of the first union of the Romanian principalities.

The construction is a synthesis of decorating elements that wish to show the Romanian traditional architecture, designed by architect Gheorge Stefanescu. The porch with arches which surround the church, transitions between the exterior and interior of the ensemble. The interior is decorated with frescos designed by the old technique in iconography.

On entering the church, on both sides there are paintings with King Ferdinand and Queen Mary. Queen Mary is one of the most striking feminine figures that influenced Romania.

The main access to the precinct of the ensemble is marked by a 58-metre spire.

Union Chamber: is the chamber that housed the signing of the Union documents in 1918 between the Romanian provinces Crisana, Maramures, and Banat with Romania. On the building’s frontispiece it is written: “A.D 1918, on 1st of December, here it was forever and irrevocably proclaimed, by solemn and unanimous voting of the people, the union between Transylvania with Daco-Romania. May the remembrance of this act be eternal.”