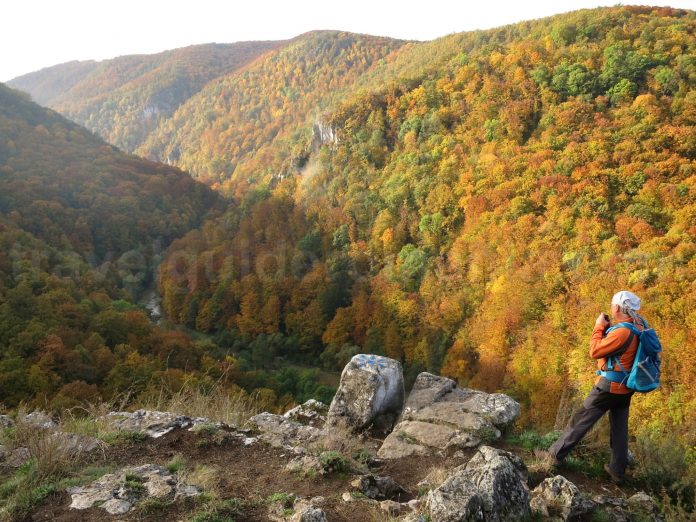 The charm of Crisul Repede (Fast River) Gorge is given by the diversity of landscapes and the underground caves.

We find here 2 show caves and 2 other ones that are included in the caving circuits. Also, more than 10 small caves that do not require speleological equipment are on the marked trails.

The rocky ridge offers numerous panoramic viewpoints over the gorge. Vadu Crisului Waterfall, the Misidului Gorges are also to be seen here.

Because Crisul Repede (Fast River) Gorge offers easy trails and caves the area is suitable for all members of the family. Those who are more adventurous can try the climbing trails, via ferrata or rafting.

Crisul Repede Gorge begins, geographically speaking, at 10 km from Huedin, in Bologa. The Gorge strands along 50 km, up to Vadu Crisului.

The tourists give the name of the Gorge to its final portion, between Balnaca and Vadu Crisului. It forms here 2 gorge areas:

Another 2 important attractions in the Apuseni Mountains – Padurea Craiului are the 2 via ferrata trails (in Peretele Zanelor and in Vama Sarii).

The Crisul Repede (Fast River) Gorge is included in the site Natura 2000 The Crisul Repede Gorge – Padurea Craiului. Built in limestone, the Gorge  is a mixed natural reservation that has a typical mountain aspect.

The Fast River, as its name says it, has many steep slopes. The river goes along high limestone walls of 100-150 m, mostly forested.

In many areas along the Gorge, the rich vegetation creates thickets hard to cross. This is due to the climbing shrubs on the trees and to the bushes (hip rose, hawthorn, blackthorn etc.). The Gorge is also the northern limit for some southern plants: Iris apylla ssp Hungarica, Pulsatilla patens, Ruscus aculeatus.

Fast River Gorge goes along the railway Oradea-Cluj Napoca. It has 3 tunnels and railway stations in Vadu Crisului, Pestera, Suncuius and Balnaca.

Car access: from DN1, Topa de Cris village take the road to Vadu Crisului. We can reach also Suncuius from here, by making a detour on the road. From Suncuius railway station the road bifurcates.

Especially relevant is that Unguru Mare (Big Hungarian) Cave and the Vadu Crisului Cave are two of the six show caves in The Apuseni Mountains.

Accommodation possibilities in the area: guest houses in Vadu Crisului, Suncuius and Balnaca villages or camping place along the Gorge. Vadu Crisului Chalet near the Vadu Crisului Waterfall is closed, being highly deteriorated.

Vadu Crisului village is firstly mentioned in 1256 under the name of Portus Crysz, meaning the harbour of Cris. It was a customs for the rafts on the river. Nowadays it is a pottery centre, renowned for the white ceramics, unique in the Southeast Europe.

Access for Vadu Crisului cave and the waterfall: at the end of the village, by the Sports Hall, at the Gorge entrance there is a parking lot. At about 200 m from here, a recently built bridge over Fast River permits the access on the left bank. You can make a visit circuit of both banks.

Until the cave there are 2 km that take 30-45 minutes on foot. The picturesque trail goes under the rocky walls and through the forest. There aren’t big elevation differences. You arrive on the terrace in front of the Vadu Crisului Cave, near the hut of the cave guide and the deteriorated construction of the former Vadu Crisului Chalet.

Vadu Crisului Cave, declared monument of nature is closed. You can visit the cave only with a guide.

The stream that comes out of the cave goes down the terrace edge into the Fast River. It’s forming a waterfall, Vadu Crisului Waterfall. The terrace in front of the cave was made from the calcium bicarbonate sediments that the water brought along. The calcium bicarbonate deposited around the plants forming the calcareous tuff, with a spongy aspect.

The puffy green moss that covers the calcareous tuff gives the beauty of Vadu Crisului waterfall’s. The 10 m water fall varies in flow, depending of the rain fallen at 5 km away, on the Zece Hotare Plateau. Here, the waters gather in underground and cross the Batranului Cave arriving in Vadu Crisului Cave. They come at the surface, at not even 20 m from the Fast River.

Those who want to arrive at the cave by train, the Pestera Station is about 300 m up the waterfall. Near the station, there is a building in ruins. There is also a bridge here that makes it possible to cross from one bank to another.

For those who come on the left bank and want to make a circuit, they can turn back in Vadu Crisului, on the right bank.

You cross the bridge near the Pestera Station and turn left along the railway. After, you walk about 2 km on an easy trail. Shortly, the railway enters the tunnel. The trail makes a detour on the left side, through the forest.

Hidden from your eyes, due to the rich vegetation, is the Taul fara fund Lake. The small lake is at the base of Stanul Stupului rock, on the right of the railway. The stream coming out from The Cave with water supplies the lake. Another lake of the same dimensions is about 600 m up the Pestera Station.

We continue by passing a steep rock named Fairy’s wall, where a via ferrata trail begins.

Hidden by the rich vegetation we pass by the huge arch of the Casa Zmaului Cave. On its left there are the ruins of a tower, the salt customs and the second trail of via ferrata.

In the past here there was a customs for the salt and the wood transported by the rafts on the Fast River. It’s known that in 1847 there were almost 2000 rafts passing through the Gorge.

From the village of Vadu Crisului we also have the possibility to enter the circuit of the right side of the Gorge. The marked trails in the Gorge begin from the former chalet. There are signs that mark the time for each route.

The right side circuit of the Gorge is marked with blue point. It has a length of 9 km and it takes 4 hours and a half. Its crossing, along the other trails in the area, does not present technical difficulties, just a keen attention in the steep areas. The route offers us the access to some panoramic viewpoints and to small caves: The Red Cave, the Fugarilor Cave, the Casa Zmaului Cave, the Podureu II Cave.

On the right side there is also the yellow point marking. This one goes opposite the Vadu Crisului Chalet directly to the Red Cave. It has 7 km and takes 4 hours. The path crosses the upper side of the gorge until the proximity of Suncuius.

The left side circuit also offers panoramic viewpoints on the gorge and access to some caves: The Goat Cave, the Devent I-III Caves. There is a red point marking and the 5 km footpath take 3 hours and a half.

Blue line trail starts from Vadu Crisului chalet and going towards Batranului Cave, common with the red point trail. It has 8 km and it takes 3 hours and a half. Old man’s Cave belongs to the caving network of 10 caves that are organized for adventure tourism. The access is only available with a paid guide, in small groups.

The trails marked with blue triangle and red triangle start also from the Vadu Crisului Chalet. These make the connection with the Suncuius Village, a former mining centre.

The red triangle (7km) goes up the Dealul Popii (653m) and passes by the houses of the Pojorita hamlet. Going down towards the Izbandis Valley it meets the blue cross marking that comes from the Old man’s Cave.

Especially relevant for Izbandis Valley (asphalted road on the valley) is the spring with the same name. It is the second deep spring in Romania: – 91 m. There is a small blue-turquoise lake where the water surfaces at the base of the rock, a wonderful halt.

The blue triangle (12km) up to the entrance of the Misidului Gorges passes by the “Castle” Suncuius Camp and through the Franturii Glade. Near the Franturii Glade there is the longest cave in the country, the Wind (Vantului) Cave. The Wind Cave is also one of the 10 caves included in the caving network.

The most interesting part of this trail is the Misidului Gorges.

Misidului Gorges start after crossing the Fast River on the suspended bridge near the Big Hungarian Cave. The Misidului Gorges, accessible only by foot go along 2.5 km. We recommend you to visit them when the water is small as you will have to cross the water a lot. After the crossroads with the Sesii Valley, the valley is known as the Luncilor Valley.

The touristic marking ends near another cave included in the speleological network. It’s the Moanei Cave found at 4.5 km from the suspended bridge.

Nearby, at about 30 meters elevation difference going up on the left, is Lesiana Cave or the Cave of Cotuna. In the last of the three halls it has some concretions, all together you can visit it for 140 m. These two caves belong to the same karst system, Lesiana being the “upper storey” of this system. The return to Suncuius is on the same trail.

A short via ferrata trail starts to the left of the entrance of Unguru Mare Cave: The Hodoaba Valley. The trail has actually two parts ensured with cables, one measuring 42 m situated just near the rocky bank of Crisul Repede River and the other upstream the short canyon of the Hodoaba Valley.