The Memorial Museum for Communist Victims is found in the former prison of Sighet that was built in 1857. This prison played an important role since the beginning of the Romanian communist regime by oppressing the intellectual class. In 1950-1955, when the prison was a maximum security facility, 200 former ministers, Members of Parliament, journalists, servicemen, bishops and eastern-catholic priests were brought there in secrecy.

The first museum dedicated to the victims of communism and resistance came about as a result of the Civic Academy Foundation, whose chairwoman was Ana Blandiana at that time in 1993. She was the one who proposed before the European Council the creation of a museum which would document this part of history that was desired to be forgotten and buried. This Museum which has a Centre for Studies started gathering photographs, objects and interviews since 1993.

At present there are 35000 pages and 5000 hours of recordings of witnesses, victims and their families. It is considered one of the best places that preserves history in Europe. We can add Sighet Museum among the Auschwitz Memorial and Normandy Peace Memorial. 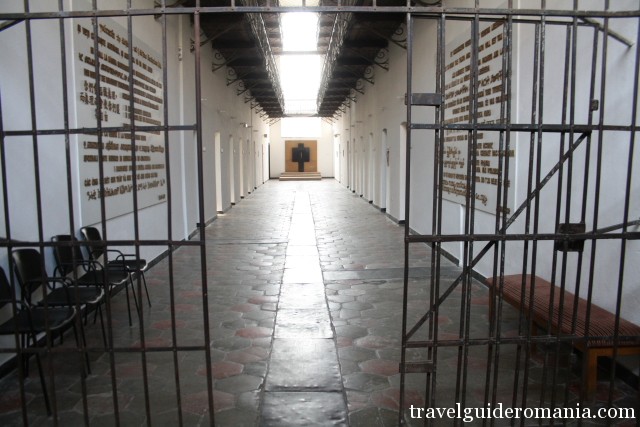 Location: Sighetul Marmatiei Memorial Museum for Communist Victims is found in the old historic city centre of Sighetul Marmatiei, on 4 Corneliu Coposu Street. The walking street was newly arranged and has a facade that at first glance does not show the atrocity that happened inside.

You will be touched by the museum’s sentimental energy as you read the motto on the entrance door, “You will know the truth and the truth will set you free” and as you listen to Ana Blandiana’s short speech in the museum’s first chamber.

The last visitor enters 30 minutes at the latest before closing hours. 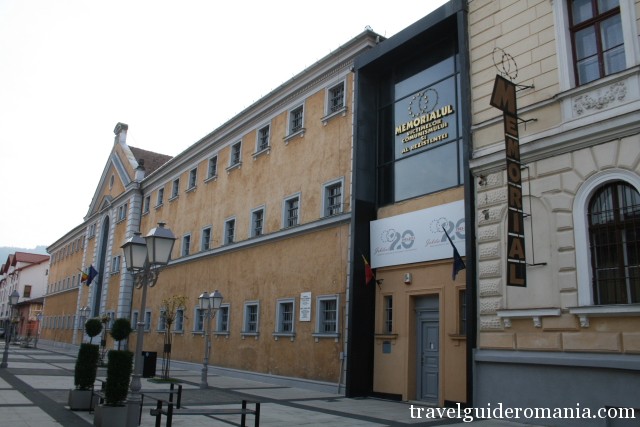 For students, pupils and elderly – 3 RON.

For former political prisoners, the handicapped and journalists – free entrance.

We advise you to pay the fee for permission to take pictures because you will undoubtedly find the objects interesting.

The political prisoners: according to a study conveyed by the Memorial’s Centre of Studies on the archive’s 93000 identification datasheets, there were 94.69% men, 42% with basic schooling, 19% with a college degree (that is 17690 persons – in the 40s this number was incredibly high) 23% with a high school diploma, 11% with a high school diploma and only 3 % were illiterate. 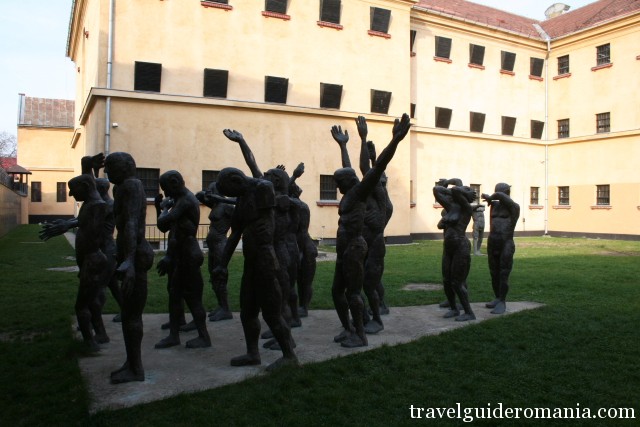 Among the victims, we must mention three of the most important political figures in Romania:

Interior design: the first chamber of the museum is entitled The Chamber of Maps because it introduces the visitor in the geographical context of Romania. You can see a map of Romania’s prisons, another with burial sites for the identified corpses, with execution locations and labour camps.

The visit continues through a corridor leading to the detention location of the prisoners. On the walls of the corridor there are  portraits of the political prisoners from Sighet Prison. 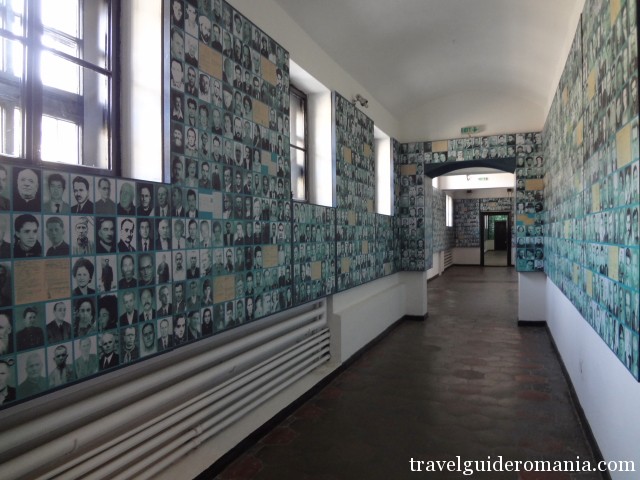 In the 48 prison cells that are now individual exhibits you will find unexpected topics:

Torturing methods in prisons and extermination camps: beatings with thin, wooden or rubber sticks, ripping off the fingers and toes, inquiry followed by electric socks, hanging the investigated prisoner upside down, wall crucifixion, inquiry with German Shepherds, inquiry with salty food but no water, inquiry followed by isolation in damp and dark cells, forcing the starving victims to hold a piece of bread in their mouths without allowing them to swallow it. 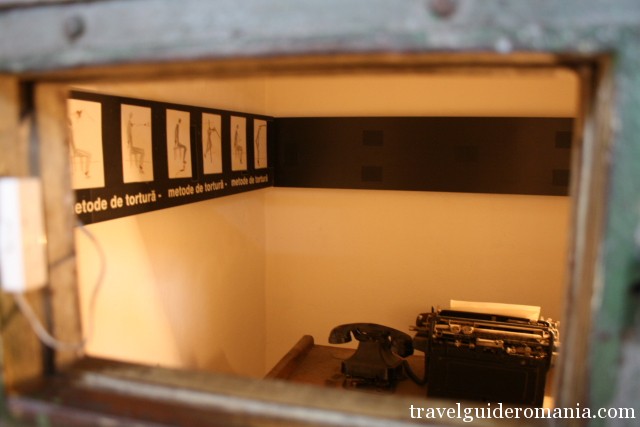 Danube-Black Sea Canal Exhibit: it was named by the Gheorghiu-Dej regime as “a cemetery of the Romanian bourgeois.” This canal was supposed to link the Black Sea to the Oder-Rin Canal through the Danube. The working force was supposed to be the “bourbons”, the majority of men who were condemned without trial. It is estimated that in the Canal’s working camps there were over 40000 workers only in 1950. Other 20000 were the so-called “voluntary workers”.

The exhibit for the patrimony buildings destroyed during the communist regime – using the excuse of modern urbanism and Bucharest’s reconstruction after the ’77 earthquake, Ceausescu managed to eradicate a large area of the city’s Historic Centre. This happened to other localities as well. 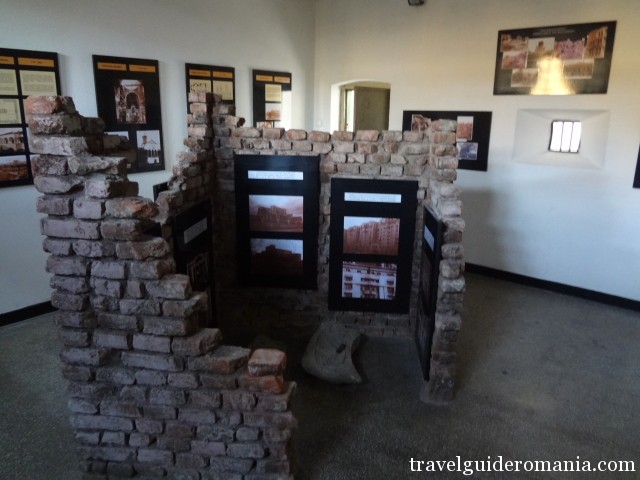 The exhibit about the greatest deportation in the history of Romania – on 18th of June 1951 over 44000 people from western Romania (Banat and Mehedinti) were deported to Baragan Plain because they “did not offer any guarantee for the state’s safety.” They were transported in 2696 wagons and 6211 trucks.

Stalin’s quote, “A man’s murder is a tragedy, a million’s is a statistic” is proven in this case. The people tried to make ends meet and rebuild their households – they were allowed to return after five years of forced relocation. 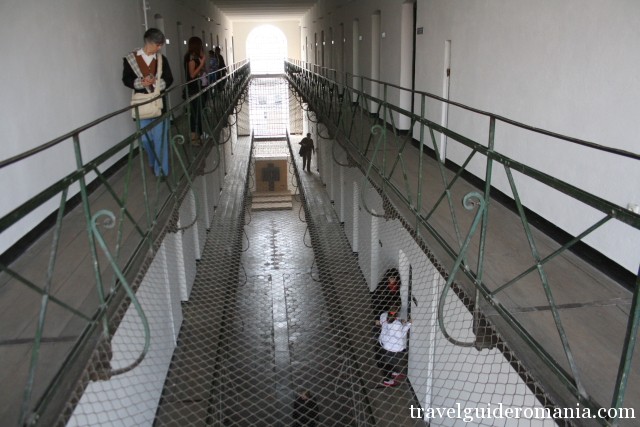 The exhibit about the strategy to eliminate religion – in 1948 by a decree, all religious orders were suppressed and mere sympathy for such orders could bring about detention. Many priests were condemned for “high treason against the country and its people”. The Orthodox Church was beheaded – 20 esteemed hierarchs were replaced. Approximately 2000 Orthodox priests were arrested, leading to a remaining of one third of the monasteries and monks.

Eastern-catholic Church was forbidden as of 1948. Most eastern-catholic priests who refused the conversion to Orthodox religion were brought to Sighet.

The Dark Cell – a special chamber used for special detention – no light, a single pair of cuffs stuck to the ground.

We were shocked to realize by seeing the museum that most prisoners in this prison were doctors, economists, lawyers, historians, teachers and governors, and the family members of the victims persecuted by the communist regime witness to its existence. The eradication of the intellectual class of Interwar Romania, the dumbing down, and the translocation of peasants to the city lead to a loss of identity that we face even today.

In an open letter addressed to the United Nations showed at Sighet Museum, a prisoner attempts to draw attention to the bad conditions for detentions, asking for support,

“The cell has a stone floor, and it is damp, there is no heat, no electricity and there is no daylight or fresh air due to the wooden planks nailed to the windows. This cell of about 3/2.5 is occupied on average by six political prisons, and there is one pot in which we can urinate and defecate… We are brought outside to move and breathe fresh air for about 24 hours per year in six-metre high rings…” – Romani Giovani Snaidero – political prisoner. All these happened in Oradea.

There is a Place for Silence and Prayer in the court of the old prison enabling each visitor to light a candle for the souls of the tortured. The impressive corridor leading to this underground chamber is upholstered with the names of those who died in prisons, concentration camps and during deportation. The ongoing list continues on the concrete fence surrounding the mournful building.

The watchtowers that 60 years ago guarded the place, now only watch over the sculptures found in the second courtyard. 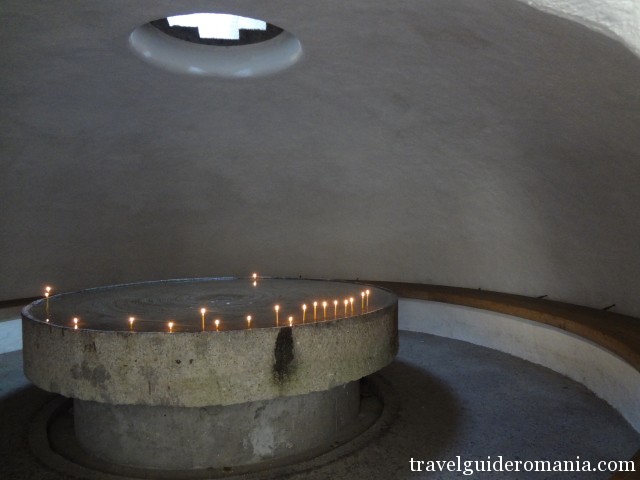 The Cortege of the Sacrificed is a sculpture done by Aurel Vlad representing 18 persons going towards a wall that closes on their horizon, in the same way that communism did to the lives of million people.

The Memorial Museum of the Victims of Communism and Resistance offers one of those kinds of experiences that make you see the surrounding world with a different perspective and understand it better – to understand that we are the result of past actions, and that the obliviousness of the past may bring about its reiteration. 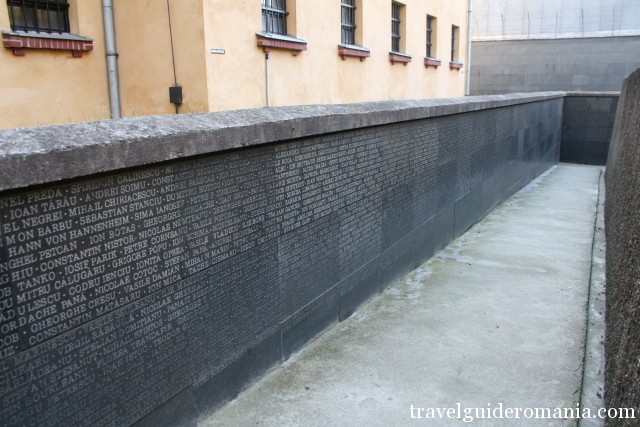 Other sight-seeing objectives in the area: we advise you not to hesitate in visiting the Merry Cemetery found only 20 km away from Sighetul Marmatiei. For those of you who are mountaineers, Rodnei Mountains, Maramuresului Mountains, Suhard Mountains and Tibles Mountains can unravel true beauties and natural treasures of Romania.

If you come in Maramures during winter time you can take in consideration skiing at Suior and Cavnic Ski Resorts.