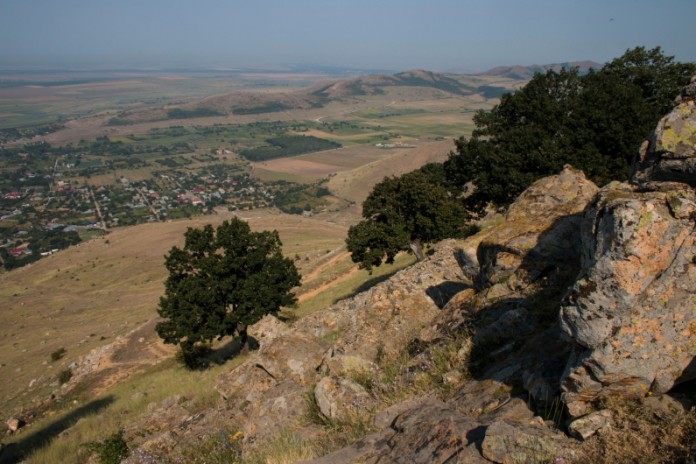 Tutuiatu Peak (467 m) is the highest peak of the oldest mountains in Romania – Măcin Mountains.

Description: The Măcin Massif has an imposing form, with prominent escarpments and maximum heights of a little above 400 m. Do note that the elevation level is quite great, of about 450 m, between the lowland at the foot of the mountain and the most imposing peaks of the massif.

The valleys hardly every have any water. The peaks rise abruptly in the neighbouring of the Danube and its ponds, at about 20 m altitude.

It has been stated  that they would be initially about 3000 m high, being part of a massif that unfolded throughout Europe from west to east. Only Dobruja Mt, Vosgi Mt, Scottish Mt and the mountains from the Bretagne peninsula still bear witness of this massif.

Macin Mountains land relief is generally characterised by the existence of some altitude levels and corridor-shaped valleys that are disproportionate to the water streams that drain them.

Macin Mountains unfold as parallel peaks oriented north-west to south-east, which spread between Garvan locality and Iaila or Carapelit pass over a length of 40 m, from where secondary peaks branch out.

Because of the stone quarries and access roads to these quarries, the scenery has been badly destroyed, degrading its touristic value in some areas.

Recommended period for visiting: due to high temperatures in this area, we recommend visiting in March-June, September-October. If you happen to be in the area in July-August, you should start your trek early in the morning – 7:30-8:00 am.

Estimated time: although the trail has 7 km, the elevation level is still considerably high – over 400 m. Depending on your fitness and the number of participants, the trek can last between three and five hours.

Access: from Macin city (13 km) heading towards Greci village. This locality is situated in the Greci depression, at 35 m altitude.

In the centre of the village there is a tourist information centre in case you need more details about Macin Mountains National Park. Opening hours: Mo-Fri: 7 am – 8 pm, Sa: 7 am – 6 pm, and Sun: 7 am – 1 pm.

In the same building you can find a farmer’s market where you can buy fresh produce.

Unfortunately for the locals, the tourist value isn’t turned into profit, so you shouldn’t expect too much when it comes to administration. The standard of living is quite low; the villagers are mostly farmers or workers at the nearby granite quarries.

There were carvers and stonemasons ever since the twentieth century. Here you can find the biggest community of Italians in Romania, families of stonemasons.

Since lodging in the area isn’t diverse, you will only find two or three guesthouses. Spending the night in the area can be done by camping at the camping site offered by the Macin Mountains National Park.

Coming from the parking lot area, we suggest you to get water supplies, since it is the last water source you will encounter. The fountain here has drinkable water.

The tourist marker ascends at first on the direction of Morsu Valley only to intersect with the forestry road that leads to a former stone quarry.

Unfortunately, at first the scenery isn’t quite pleasant. There are many buildings in disuse that were used for the neighbouring quarry. If you look past the inconveniences, you will see a beautiful ridge that connects the two most beautiful peaks in the Macin Mountains – Tutuiatul Peak (467 m) and Piscul Înalt Peak (442 m).

You need to pay attention to the tourist marker, since it isn’t completely visible in certain areas. If you maintain your route towards the peak, you won’t get lost.

You can ride your bike on the aforementioned route, until you reach the neighbouring area of Tutuiatul Peak. Up to this place, the marker spreads on the forestry road, only to converge to a more abrupt and narrow path. Although the flora is poor at the foot of the mountain, you will be amazed to find oak trees uphill. The aged aspect of these mountains is particularly wonderful.

We suggest that you pay attention at the flowers and animals that you pass by. This area has a rich fauna, so you might encounter this area’s celebrity – the Dobrujan spur-thighed tortoise.

It is a land tortoise, protected by the law as a living monument of nature. It has a long shell of 20-30 cm, 15-20 cm wide, high, cambered, a short tail, covered by a whole plaque. In the shell the tortoise can take cover in its entirety: head and feet. It feeds by day, only with plants, sometimes with worms and snails.

In autumn when hibernation starts, it buries itself 30-40 cm deep. It lives approximately 100 hears. The spur-thighed tortoise can be encountered in dry, sunny climate, in grassy and rocky places.

Depending on the free time allotted to visiting this tourist objective, you can climb Pietrosul Mare Peak. You will gain different insight on the Dobrujan lowland.

If you practice climbing activities, it is good to know that on the access valley towards Tutuiatul Peak (Morsu Valley) there are two former stone quarries which have been turned into workshops for mountaineering. These have been equipped with trails according to the proper safety regulations.