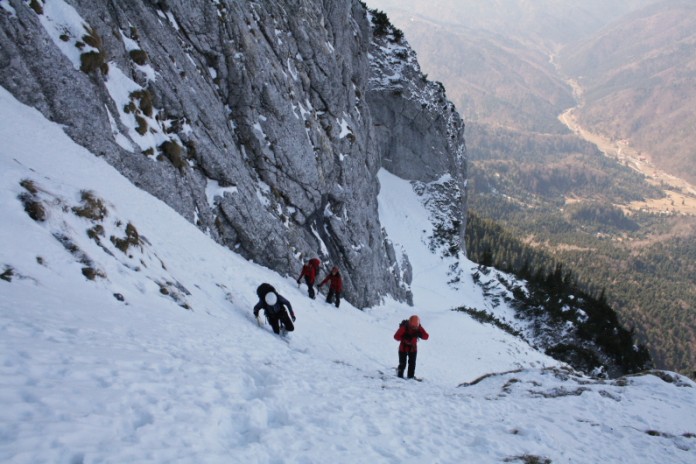 The geological structure of Piatra Craiului Mountains places it among the most suitable mountains for hiking on unmarked trails and for climbing. Due to its limestone structure, the massif shelters some impressive relief forms: caves, gorges, canyons, steep valleys and, fortunately for mountaineers – big walls and narrow ridges. Most of the ridges are currently hiked as climbing trails with various degrees of difficulty.

The legislation in Romania regulating the access of persons on unmarked trails, including climbing trails, is against those practicing climbing and other mountain sports (which involve leaving the tourist marked trail). According to Government Emergency Ordinance no. 57/2007, leaving the tourist marked trail is considered a contravention. It is sanctioned with a civil penalty from 3,000 to 6,000 lei for natural persons and from 25,000 to 50,000 for legal persons.

It was not until recently that the legislation was applied, and the Administration of Piatra Craiului National Park seems determined to exclude trekking and climbing outside the marked trails. Of course, 95% of the climbing trails are found outside the tourist trails. In Piatra Craiului Mountains, climbing has been practiced since 1930`s. The first big premiers have taken place there.

General information: Piatra Craiului Mountains include a single ridge, limited by steep and rocky versants. The general orientation of the massif is SW-NE. The alignment is perpendicular towards the general orientation of the Southern Carpathians. The mountain massif starts at the outskirts of Zarnesti city, through the forest-covered slopes of Piatra-Mica Mountain and continues with the beautiful crest, Piatra Craiului Mare. The ridge stretches on about 25 km and reaches a maximum altitude of 2238m, in La Om Peak or Piscul Baciului Peak.

Piatra Craiului Massif was declared Natural Reservation in 1938 and Natural Park in 1990.

The access in Piatra Craiului National Park – from Zarnesti city.

Even the access to tourist marked trails is conditional on purchasing a park entrance ticket. The tickets can be purchased from:

2. Payment through text message – ORANGE, VODAFONE – send a text message at 7465 with the text “CRAI DA”. Only when you send this text correctly, you will be charged and receive a text message with the confirmation code. 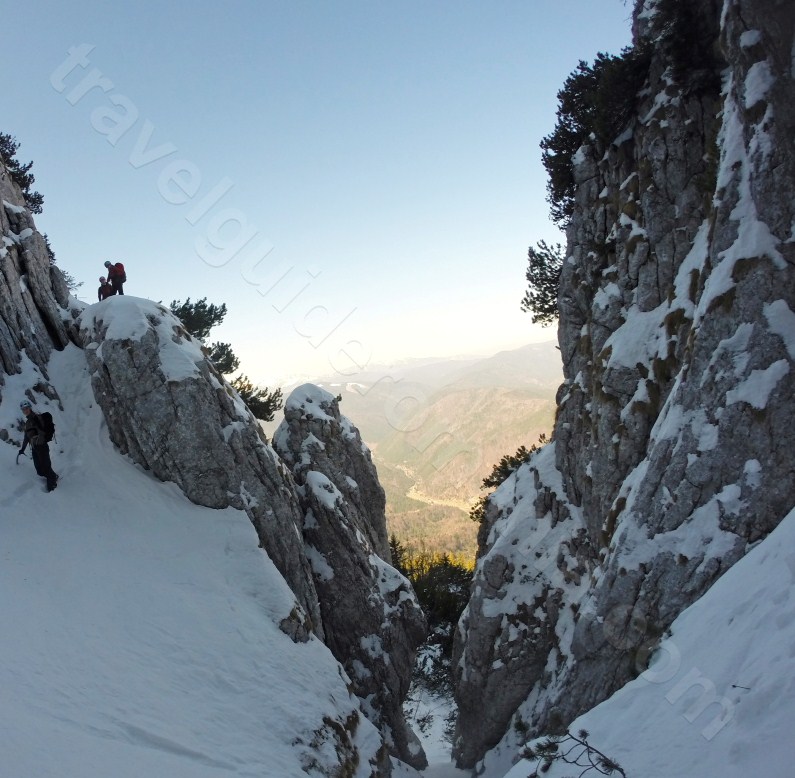 The ticket price at the automats is 5 lei.

In wintertime, although not legally regulated, but rather based on a tacit understanding between the Administration and the mountaineers, the access on unmarked trails has been allowed without persecuting the climbers, as the vegetation is under the snow and people do not affect it by hiking on unmarked trails.

Practicing winter climbing in Piatra Craiului Mountains involves a good knowledge of the mountain massif and a good experience in winter climbing. We do not suggest trying any trail if you do not bring familiar with the area. Most of the alpine trails have been opened since 1955-1975, which means that most of the climbing protection (pitons) is not trustworthy. We recommend entering on trails with additional pitons and mobile protection (nuts, friends). 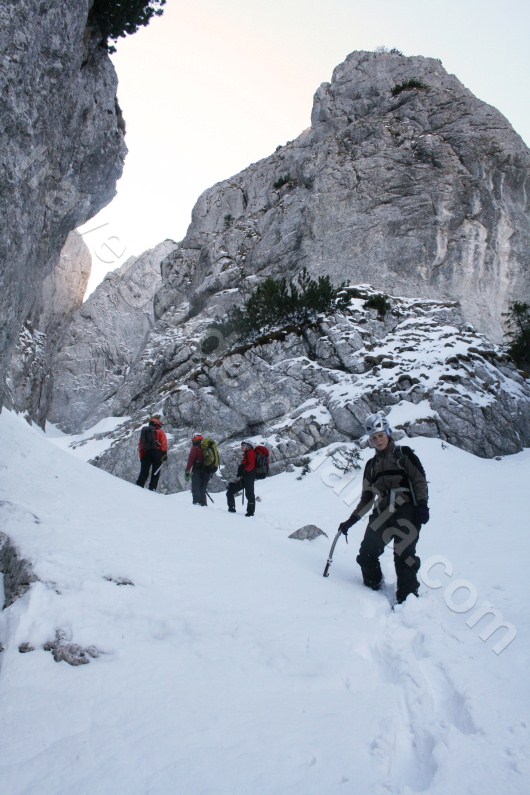 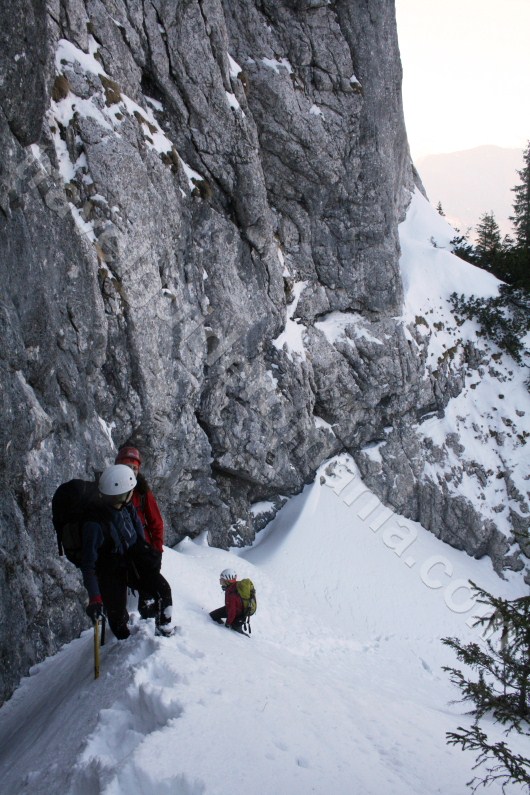 The unmarked trail – Braul Cioranga Mare – Travel Guide Romania promotes climbing in Piatra Craiului Mountains and supports the initiative of climbers and mountaineers group, who wish to change the legislation in the field.

Access to Braul Cioranga Mare: You start from touristic area Plaiul Foii on Padina lui Calinet Valley. You follow the water stream, through the forest, on an unmarked trail. At around 1270m altitude, you reach Malul Galben area, where the trail gets steeper. The valley closes and we are forced to climb a small 4m waterfall (it is the only difficult passage in this climbing area). 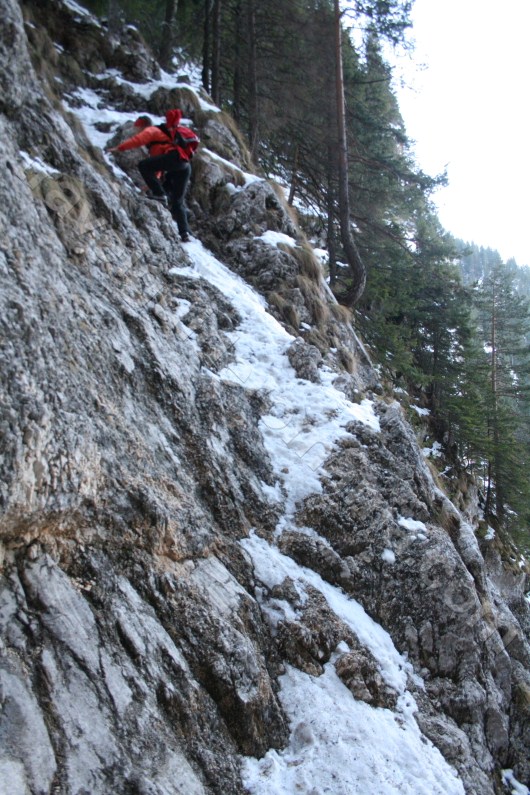 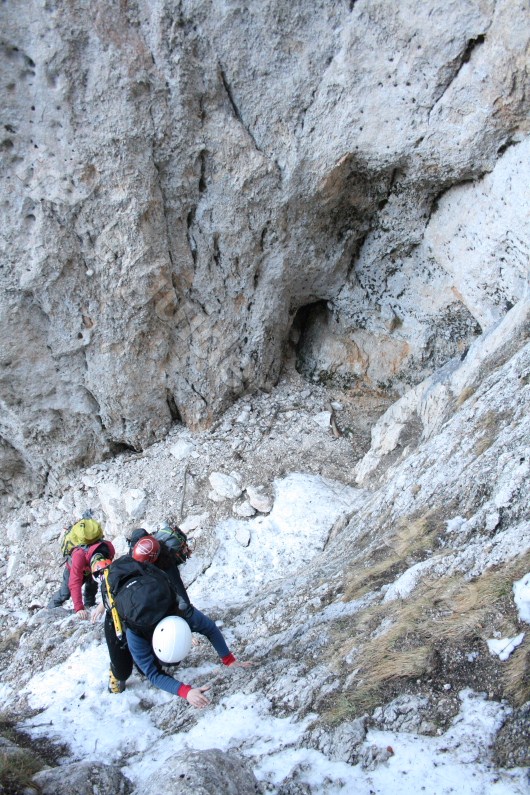 We continue to ascend through the woods, on the mountain side until reaching the Refugiul Sperantelor shelter. From this area, orientation in wintertime becomes much more difficult if you`re not familiar with the area. We continue our hike slightly ascendant through juniper.  If there is deep snow, you’ll most certainly have trouble advancing.

The first gully crossed by the trail is Valcelul cu fereastra and after that Valcelul cu Smirdar. The abrupt slope requires the use of an ice axe. A descend follows towars the most important valley we cross – Cioranga Canyon. Although the canyon seems easy to hike upstream, the trail is rated with difficulty degree – 3A. The route Braului Cioranga Mare is used by lots of climbers who wish to reach various entrances to climbing trails.

Leaving the juniper behind, we reach the scree slope of Valcelul Spalat. We pass this area and continue only if the snow conditions below the giant vertical wall allow it.

You`ll have to be very careful when climbing, especially in the upper area. The slope is fairly steep in this area.

We move along this wall until it`s left behind and reach the most exposed part of the climb – a ridge ascending parallel to Cioranga Mare Valley.

We`re at around 1790m altitude and we can admire the whole Cioranga Mare Valley. If you are not confident scrambling on steep terrain, do not hesitate to rope-up.  Hold the direction of the ridge. This will lead you to the main ridge of Piatra Craiului Mountains in the area of Refugiul Ascutit (shelter) and Ascutit Peak (2150m altitude).

Duration of the trail: 8 to 10 hours, in wintertime, according to the quality and quantity of the snow and to the physical shape and technical knowledge of the hikers.

Leaving the trail – you can spend the night at Refugiul Ascutit (shelter). This means taking with you sleeping bags and sleeping pads. We do not suggest this due to the weight of the backpack. Another alternative would be heading to Curmatura hut, where the accommodation is pretty nice, for a fair price (30 lei/night).

This climb has a significant cumulative elevation gain – 1200m (until reaching the main crest). This climb is rated 1B on the Romanian mountaineering scale. A grade of 1B usually means easy scrambling where roping-up is not necessary.

Leaving Piatra Craiului Massif– you can spend the night at Curmatura cabin, following the marking yellow line towards the area named Gura Raului. If you have left your car in Plaiul Foii area, we suggest descending on the same trail marked with yellow line, but in the opposite direction, through Crapaturii Valley. You`ll also need crampons + ice axe in this area with high inclination.

Climbing in Romania is anyway far less popular than it is in western European countries. Applying the legislation in force regarding the Protected Areas will certainly lead to a decrease in the (small) number of Romanian climbers.