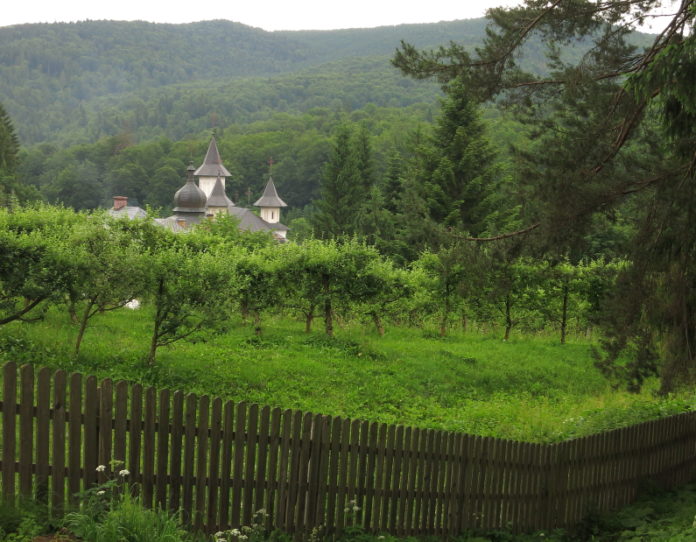 You can also find here:

Ținutul Zimbrului (The Bison Land) includes an area where natural values are intertwined with religious and cultural-historical ones. Here you will find the Carpathian bison in the Reservation “Dragoş Vodă”, but also a monastic tradition that goes uninterrupted for the last 600 years.

The Natural Park Vânători Neamţ, established in 1999, is located in the northern part of Neamţ County. It stretches on the eastern slope of the Stânișoarei Mountains and over the Subcarpații Neamtului Mountains, at an average altitude of 800 m. The territory of the park goes between 365 m and 1231 m (Vf. Buhalniţa).

This forest harbors a high diversity of fauna, including large carnivores: bear, wolf, lynx but it is a perfect place for bird watching lovers, with its 103 species of birds listed.

Due to its diversity of flora and fauna the Natural Park Vânători Neamţ was declared a site of community importance and a special protection area for birds and animals.

Ţinutul Zimbrului is the only landmark in Romania present in the top 100 Sustainable Destinations competition organized globally by Green Destinations. “The Bison Land” was present in the 2017, 2018 and 2019 rankings. To protect the secular trees in this area 3 reserves were set up. Two of these are known from Eminescu’s lyrics-Calin, file din poveste-(Eminescu is the national poet of Romania)

– The Nature Reserve “Codrii de aramă” is a reservation of sessile oak located in the commune of Agapia. The oldest trees of the reserve are around 135 years old. The reserve has an area of about 10 hectares at an altitude of between 550 and 650 meters. The name “Codrii de aramă (The Copper Woods)” comes from the brass color of the sessile oak leaves in autumn.

– The Nature Reserve “Pădurea de argint” is a forest and landscape reserve. It is also located on the territory of the commune of Agapia, near Văratec, 1 km away from the reserve “Codrii de arama”. The nature reserve, (2.4 ha), includes birches over a century old. The name of the reserve comes from the color that the forest acquires in autumn and winter, when the birches become silvery. The rustic celebration “Pădurea de Argint“ takes place on June 15th in the village of Văratec.

– The Nature Reserve “ Pădurea de smarald ” or the Dumbrava Oak Nature Reserve has an area of 56.6 ha and includes secular oaks aged between 150-200 years.  It is a scientific reserve of the Academy; here you will find oaks at an altitude of 450m. The reserve is located in the village of Vânatori-Neamţ being crossed by the National Road DN 15 B Poiana Largului – Târgu Neamţ.

Within the Natural Park Vânători Neamţ is located the Reservation of the Carpathian bison and fauna “Dragoş Vodă”.

In 1969, the first 3 specimens of bison were brought here from Poland. Currently a number of six specimens of bison are in captivity on about four hectares, in the zoo “Dragoş-Voda”. Along with them are other mammals: Carpathian deer, fallow deer, wolves, bears, rabbits, badgers, wild boars. Another 17 specimens of bison live in semi-freedom in a perimeter of 180 hectares. From 2012 to nowadays, 30 bison have been released into the wilderness of the Natural Park. As a result of the multiplication, the number of bison is now about 45. Some of them are monitored with radio collars or GPS collars around their neck. In Romania there are two more areas where the bison lives in freedom, in the Țarcu Mountains and the Poiana Ruscă Mountains. Romania is among the 9 European countries where bison live in the wild. The bison is the largest herbivorous mammal in Europe, with males reaching at maturity 800-1000 kg.

Next to the headquarters you can find a wooden suspended walkway. It has a length of 200m and a height of 15 meters allowing observation of vegetation on the same level as the crowns of the surrounding trees. Near the visitor center of the Natural Park Vânători Neamţ you will find an observatory for birds.

– an educational route – on the tracks of the bison (inside the enclosure of bison) of 2.4 km long and marked with blue triangle

-and a connection route that leads to the Zoo “Dragoş-Voda”, a route “through the deciduous forest” in length of about 1,2 km, marked with yellow triangle.

The rangers of the Natural Park organize, by appointment a “Bison safari”. Through this program you can experience the searching for the Europe’s largest mammal.

Other tourist information centers are located in Varatec, in the vicinity of the “Pădurea de Argint” Reserve and in Târgu Neamţ.

Another natural resource of the ecotouristic destination Ținutul Zimbrului (The Bison Land) is represented by salt water springs. Although poorly exploited and almost unknown to tourists, archaeological excavations have revealed traces of exploitation of these springs as far as 8,000 years ago. The most famous are the Slatina Spring in the city of Târgu Neamţ and the Puturosu Spring, located near the Skete of Vovidenia.

A strong point of the ecotouristic destination Ținutul Zimbrului (The Bison Land) is the religious tourism. Most of the tourists who arrive in the Natural Park Vânători Neamţ visit the numerous monasteries and sketes in the area. On the territory of the Natural Park Vânători Neamţ there are a number of 16 monasteries and sketes constituting the most important monastic concentration in the Carpathian Mountains. The monastic community here is the second largest in Europe after Mount Athos.

There is a large diversity of monasteries, from fortified monasteries like Secu, to small wooden splendours like the “Biserica dintr-un brad (The church from one fir tree)” at Sihla. All these monasteries have an active monastic life. Here are also the largest monasteries of nuns in the Orthodox world, Varatec and Agapia (over 400 nuns). The monastery villages of Agapia (about 140 houses), Văratec (about 180 houses) are unique in Europe. Most houses are over a hundred years old.

The Neamţ Monastery, a monastery representative for the Moldavian Gothic architectural style, is the oldest monastic settlement in Moldova, the first constructions dating from the 16th century. The present church was founded by Stephen the Great at the end of the 15th century. The church houses an icon of the Mother of God painted in 665, on the territory of the present Israel. Here is the oldest and “richest” monastery library in the country, by the number of volumes and the value of their content, with over 15,000 volumes. The work of Dimitrie Cantemir “Descriptio Moldaviae” was first printed here in 1825.

The Secu Monastery, founded in 1602, has the shape of a medieval fortress, with thick walls and defensive towers. The monastery houses a treasure very valuable from the historical and artistic point of view, which contains vestments, manuscripts, prints, precious metal objects.

The Sihastria Monastery was first mentioned in 1655. It is known among pilgrims for the fact that it is the place where Father Cleopa was buried (one of the most famous preachers of Moldova).

The Agapia Noua and the Agapia Veche Monasteries (the new and the old)-the first construction was 2 km above the current Agapia Noua Monastery.  The Agapia Veche Monastery was entirely rebuilt from wood in 1990-1994, only the belfry is the original one. The Agapia Nouă Monastery is one of the largest monasteries of nuns in Europe along the Văratec Monastery. The monastery has a special cultural heritage, due to the frescoes painted by Nicolae Grigorescu during 1858-1861, when the artist was around 20 years old (one of the most important painters in Romania). In the village, with more than 140 houses over a hundred years old, inhabited by nuns, one can visit the Memorial House of the writer Alexandru Vlahuţă. In one of the monastic houses in Agapia, inhabited and functional, a Vivant Museum opened in 2013. Here you can see the daily life of nuns, see them as they pray, embroider or weave. In the museum, there are pottery and weaving workshops, especially for children.

The Văratec Monastery, the largest monastery of nuns in Romania has also a monastery village in the vicinity of the monastery.

The Sihla Monastery is located in a rocky area of the Stânișoarei Mountains, at 1000 m altitude. The first written mention that Sihla was a hermitage dates from 1326. Near the Sihla Skete, a 10-minute walk down a footpath, there is a small cave, located in a narrow space between two high cliffs, called “The Cave of Saint Theodora”. It is said that this is where Saint Theodora of Sihla lived. A prayer shrine was created inside. Near the cave there is also a rock which can be climbed with the help of a wooden staircase. At the top there is a hollow where rainwater gathers. It is said that it was the place where the Holy Theodora ate the crumbs brought by the birds, from the Sihastria Monastery. Near Sihla Monastery, under a cliff, you can see the “The church from one fir tree” – built from the wood of a single tree in 1763. All monasteries are reachable by asphalt or forest roads. In general, monasteries also offer accommodation for pilgrims.

A number of 9 marked tourist routes connect monasteries and sketes, crossing vast forests and glades that offer pilgrims belvedere points. In the Sihla Monastery area there is a bouldering area. It is practiced on sandstone blocks with heights of 2-15 meters and varying degrees of difficulty. Access is made on a path marked with a red circle.

Ion Creangă’s childhood home in Humulesti, built in 1830, is currently the most visited museum house in the destination.

The Neamț Fortress, located in the north-west of Târgu Neamț was one of the most important fortifications in the medieval period. Built at the top of a ridge guarding the Ozana Valley, the fortress is on one of the trade routes between Moldova and Transylvania. Because of its strategic position it was known as the “Eagle’s nest”. Built during the reign of Peter Muşat (1375-1391), the fortress was a barrier in the way of the Ottoman, Hungarian or Polish invasions. The fortress was originally composed of the central fortress closed by a courtyard with walls of 12 m high and 4 towers. Stephen the Great (1457-1501) increases the fortress, raises the walls to 20 m and adds an outer enclosure with 4 circular towers for artillery. In front of the main gate there is a bridge supported by 14 stone pillars in the form of an arch. In 1476, the fortress resisted the siege of the 200,000 soldiers led by Muhammad II. In 2007-2009 The Fortress was rehabilitated with European funds.

It is crossed by the national road DN 15 B Poiana Largului – Vânători – Târgu Neamţ.