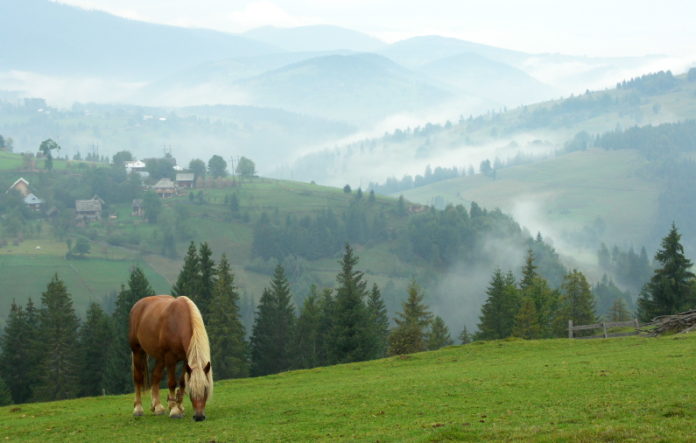 Țara Moţilor (The Land of the ʺMoţiʺ) is situated in the center of the Apuseni Mountains. It is an ethnogeographical region of Romania. Also known as ʺȚara de Piatrăʺ (the Stone Country), it is located in the upper basin of the Arieş River. Țara Moţilor is traditionally spread over Arieş, from its springs to the Bistra Village area, located after Câmpeni.

Țara Moţilor lies between the peaks of the Bihor Mountains, the Mare Mountains and the Metaliferi Mountains. The city of Câmpeni is considered the capital of the ʺmoțiʺ. Downstream on Arieş, towards Turda, stretches Țara Mocanilor. The name ʺţarăʺ has the meaning here of “county” or “area”, referring in general to a depression, a river basin, more or less isolated among the mountains. Part of Țara Moților, the area situated north of Arieş Valley is located in the Apuseni Natural Park.

According to historians, the name “moți” comes from the “ancient hair”, the topknot that the Dacians wore, a custom kept by locals until the 19th century. The “moți” are also called “ţopi”, a word derived from the term “zopf”, which also meant hair.

Mount Găina (găina means hen) can be considered a real spiritual center of the “moți”. The Mount Găina is the meeting point of the boundaries of four counties (Hunedoara, Arad, Alba and Bihor). Here, at the top of the mountain, at 1486 m, the “moți” had been gathering since ancient times, at the Maiden Fair on Mount Găina. At first it was a fair place and a reason to meet young people from remote areas of Apuseni. Even nowadays the Fair is held annually, being a well-known folk holiday in the Apuseni Mountains. The Fair is held both on the mountain (on Sunday) and at its base, in Avram Iancu (on Saturday). The Maiden Fair on Mount Găina is held in the nearest weekend to the feast of Saint Elijah (July 20). The tulnic (alphorns) chorus made of the women from the village of Avram Iancu opens the folk show at the cross and the statue of Avram Iancu on the top of the mountain (Avram Iancu is a national hero in Romania).

A more recent craft fair (the first edition was in 1995) – the Carpenter Fair – takes place in the second part of August, in the area of Petreasa Peak, in the commune of Horea.

In the larger communes a weekly fair is held on one of the days of the week, most often on Saturday or on Sunday. At the fair, the “moți” buy the necessary supplies, sell or buy animals, but also socialize, find out “what’s new”. The fair day begins at dawn for those that live far from the center of the commune.

Thus, in Țara Moților we can find the permanent settlements at the highest altitudes in Romania (the area of Petreasa Peak, the commune of Horea). A group of several households form hamlets in Țara Moților.

Studying a map of the area you will notice that Țara Moților is studded with hamlets, their number exceeds 280. The commune of Vidra, for example, has the largest number of hamlets, 39, ranging from the altitude of 600 to 1,300 meters. The most remote hamlets are 10 km away from the center of the commune. However, the 13 communes in Țara Moţilor have a small number of inhabitants, between 1,000-2,000 inhabitants, spread over large areas.

Câmpeni and Abrud have a higher number of inhabitants, of about 7,000 and 5,000 inhabitants. In addition to these two there are the groups of seasonal households, used only during the summer period, called mutături or nămaşe (such as those in Călineasa Glade).

Other names refer to the use of the land- Fânaţe (Hay Land), Livada (Orchard), Țarina (cultivated field), Izlaz, Preluca, (both means pasture). Others indicate deforested areas- Runc, Târsa, Curături, Curăţele or the method by which they were obtained – burning – Arsuri, Arsurile, Arsurii, – deforestation – Lazuri, Lazea, Faţa Lăzeşti. The harsh life in the mountains led to the gradual depopulation of Țara Moților, thus the inhabitants moved closer to the asphalt road on the Arieş valley. A visible depopulation happened on the karst Plateau Poieni, located on the right slope of the Arieşul Mic River.

Due to poor infrastructure and lack of water, out of 5 hamlets there are only a few families left. The stone church in the deserted village Poieni was erected in 1612-1615, being thus one of the oldest Romanian churches in the Apuseni Mountains.

In recent years, the asphalting of the roads that lead to more remote hamlets has led to the emergence of new constructions, especially guesthouses, such as on the karst plateau of the Gheţar Hamlet.

The Arieş Valley has become an increasingly visited tourist destination, which has led to the appearance of many guesthouses, located mostly on the line of the Arieş Valley. Many of them, however, unfortunately do not respect the architectural specifics of the area. The “moţi” currently deal with wood processing; rural tourism and practice subsistence agriculture (grow animals, collect fruits and forest mushrooms, and cultivate small portions of land).

The “moţi” are famous for their skill in working with wood (especially in the manufacture of tubs and pails). In the past, the “moţi” descended with products made of wood at the fairs in the plain.

Such wooden objects are made especially in the Pătrăhăiţeşti Hamlet. The Pătrăhăiţeşti Hamlet, situated at an altitude of 1,100-1,200 m, is one of the most isolated hamlets in Apuseni. Access is made on a 5 km forest road, which in winter can be impassable for cars. Here there are two private museums, where various exhibited wooden objects can be bought. The most coveted wooden object is the tulnic (alphorn). It is a conical wooden singing instrument with a length that varies, reaching up to 3 m. There used to be one in every house. It was used in particular to warn certain dangers or to call to various activities (to make haystacks, to call to get-togethers, etc.). The craftsmanship of alphorns is currently supported only by tourists eager for a memory from Țara Moților. From Pătrăiţeşti you can reach by foot the nearby Buciniş Waterfall or the Cucurbăta Peak.

Țara Moților is a mixture of mountain civilization and savagery.

The landscape here is still dominated by haystacks and wooden fences that divide the hay meadows.

The biodiversity of these meadows pleases the eye of the traveller during summertime.

There are 32 protected areas here, most of them are caves. Țăra Moţilor is known for its karst landscape, which hides an impressive number of underground caves. Among them there are the most beautiful caves in the country (Piatra Altarului, Pojarul Poliţei, Avenul din Sesuri etc.).

The visitors have the opportunity to admire the largest underground glacier in the country, the Scărişoara Glacier– a natural monument. The Scărişoara Glacier, with its impressive entrance, a circular gap of about 60 feet in diameter, is located in the Glacier Hamlet, at an altitude of 1,165m. The access is made from Gârda de Sus (and not in the village of Scărişoara) on the paved roads that go along the Gârda Seacă Valley or the Ordâncușii Valley. On the paved road that crosses the Ordâncușii Gorges there is another cave: Poarta lui Ionele. The cave has no formations but has an impressive portal of 15m high.

But the widest cave entrance in Romania is on the Gârdişoara Valley. The entrance of the Coiba Mare Cave has an opening of 54 x 45 m. The cave can be visited only with neoprene suit, the cavity sheltering an underground river, lakes and waterfalls. The access to the cave is made by following the road from the Gârda Seacă Valley, road that begins in Gârda de Sus. The road is paved up to where it turns to the Glacier (3km), further on, the next 10km, it is unpaved.

The cave is located near another isolated hamlet in Țara Moților, the Casa de Piatră Hamlet. Its name comes from the rocks surrounding the hamlet. It is located at an altitude of 1,000-1,100m. There are about 12 families, some of them dealing with agrotourism.

Another cave visited in the area is the Vârtop Glacier. The cave being closed, the access is made with a guide (you can find him at the Casa de Piatră guesthouse), for a fee. The cave is not electrified. We recommend that you bring lamps with you, because the cave is quite special, full of speleological formations. From Casa de Piatră you must climb about 30-45 minutes on a trail through the forest, to the access gallery of the cave. Here, in the Glacier Hall (about 70m wide), enormous icicles, stalactites and stalagmites and even ice columns are formed in winter.

In this cave, three footprints of prehistoric man were discovered, one of them being at the Institute of Speleology “Emil Racoviţă” in Cluj-Napoca. The cave of Vârtop Glacier has a length of 300 m and has numerous speleological formations.

From here you can continue on marked trails to the well-known karstic Padiş Plateau or to the Călineasa Glade. Also on the Gârda Seacă Valley, about 2 km downstream from Casa de Piatră is the Tăuz Spring (a sign guides you on the trail marked with blue dot). The spring is located in a glamorous place, hidden at the base of a rocky wall, in the forest, at about 30 minutes from the road along the Gârda Seacă Valley. Here the waters that are lost in the Coiba Mică and Coiba Mare Caves come to the surface, forming a lake. The Tăuz Spring is currently the deepest siphon explored in Romania (-87 m).

At the Arieş springs, upstream of Arieşeni, you will find the ski area from Vârtop consisting of three slopes.

A monument of folk architecture, the Memorial House “Avram Iancu” is located in the village of Incesti, the commune of Avram Iancu. It’s a typical house for the area, with its spiky roof, built around 1800. The house was left by Avram Iancu, by will, in 1850 “for the benefit of the Romanian nation”.

Dealul cu melci (The Hill with Snails) is a paleontological reserve located in the village of Nemeşi, the commune of Vidra. 35 species of mollusks are encrusted in the conglomerate located in the immediate vicinity of the county road DJ Mihoieşti-Avram Iancu.

The Pişoaia Waterfall, a landscape reserve is also located in the village of Nemeși. The waterfall of about 18 m high, visible from the road, overflows over a travertine threshold.

On the territory of the commune Bucium, there is an important tourist attraction in Țara Moților, the Geological Reserve “Detunata Goală” (1,158 m high). The 65-meter wall, consisting of quadrangular basalt columns, impresses even from afar. The marked trails from Bucium or Roşia Montană lead to Detunata. About 2 km from the “Detunata Goală” reserve (24 ha) there is also the Natural Reserve “Detunata Flocoasă” (5 ha) which owes its name to the spruce forest that covers it.

Roşia Montană is one of the oldest mining settlements in Europe. The name comes from the reddish color of the river, rich in minerals, especially iron, which crosses the locality. Many of the archaeological finds in this area can be seen in the Mining Museum in Roşia Montană.

the main access route is the National Road 75 Lunca – Turda (160km), which crosses the county from west to east, on the Arieş line. Other two paved roads lead to the main road, one in Câmpeni and another in Albac. The paved national road DN 74A Abrud – Câmpeni reaches Câmpeni, Abrud being connected to both Brad and Alba Iulia. The national road DN1 R – or “Transursoaia” – Huedin – Beliş – Horea – Albac (80 km) go to Albac. It crosses the Ursoaia Pass (1,324 m).