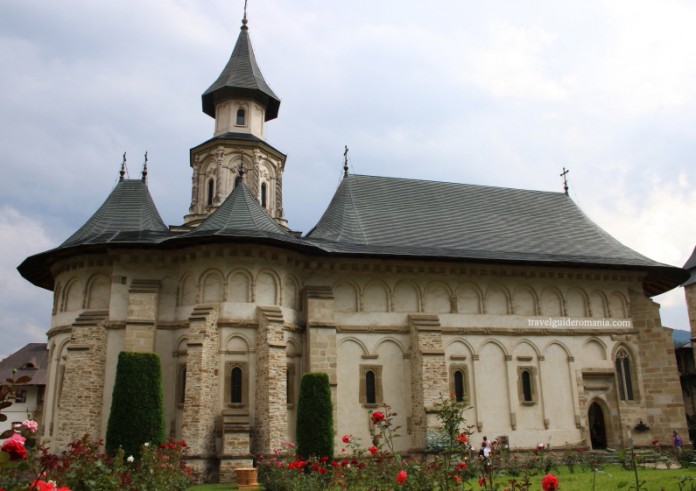 Putna Monastery was built by Prince Stephen the Great. He has the greatest promoter of the Moldavian architecture style known today.

Putna Monastery was Stephen’s first religious edifice and it was built between 1466 and 1469, and dedicated in 1469.

The church was erected on the grounds of an old hermitage from the thirteenth/fourteenth century.

Legend has it that the place was decided upon by shooting an arrow to the hill located near the monastery. The building was erected on the ground where the arrow hit.

Unfortunately, the current church it’s not the one built by Prince Stephen.

Under the reign of Stephen the Great, Moldavia turned into a big construction site. Churches were built and fortified. Contractors adopted some gothic decorative elements and adapted them to match Orthodoxy.

The first monastery fortified by Stephen the Great was Putna monastery.

Only the Thesaurus’ Tower remains from the original fortification (1481). 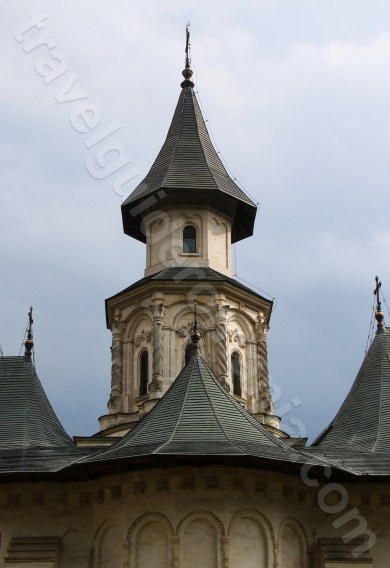 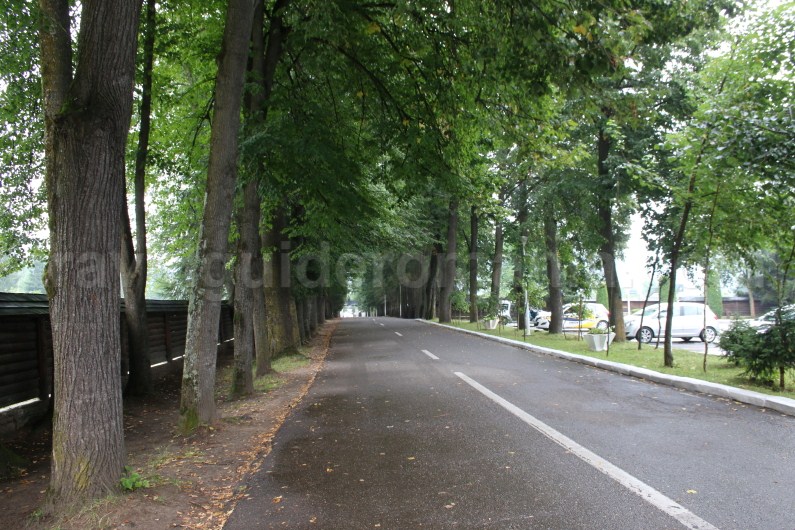 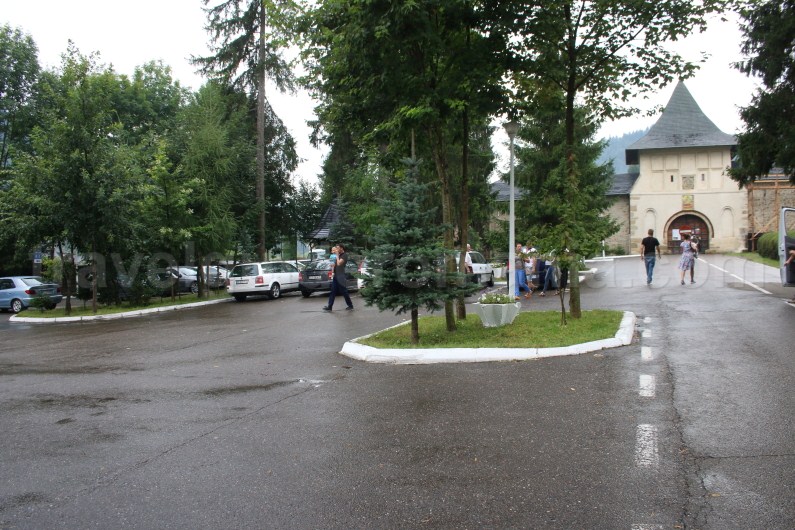 History: it’s not news that the original church built by Stephen the Great had interior and exterior paintings made on a gold background. The covering of the roof was made of lead.

The church was demolished in 1654. The reason for its demolition is still unknown. It’s assumed that it had some technical issues, or that the ruler of that time wanted to search for hidden gold in the construction.

It was rebuild 8 years later by Vasile Lupu, Gheorghe Stefan, and Istrate Dabija. The lead from the rooftop was used for bullets.

Based on studies conducted along with the restoration of the building, the rebuilding of Putna didn’t go according to the original design. 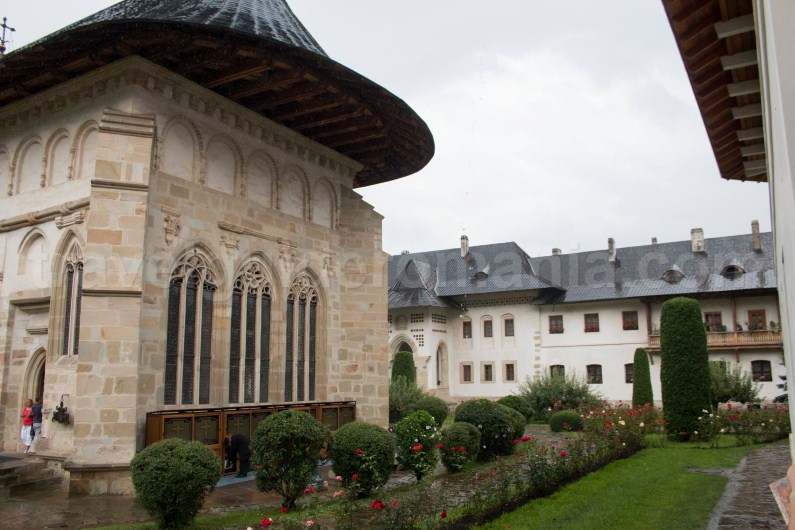 There were two more restorations after rebuilding. No paintings on the exterior walls of the church were made. Everything indicates that the new building was modified both planimetrically and aesthetically from the original design made by Stephen the Great. 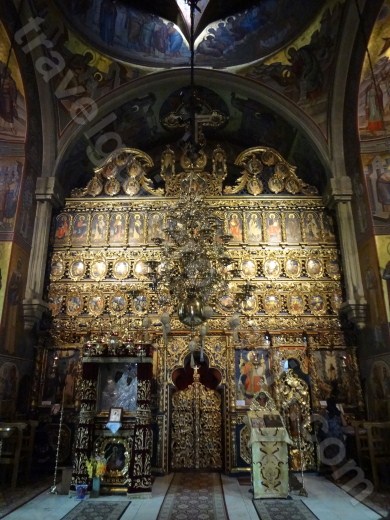 – The church has a platband with interwoven tori above the windows. This decorative element appears later during the reconstruction of Putna. It was first used when Dragomirna church was built in 1608;
– The church’s threshold is lighted by three grand gothic windows, peculiarities of the reconstructed church;

–  The steeple has even newer characteristics – the star-shaped base doesn’t have crests, but sweeps peculiar to the Baroque style. 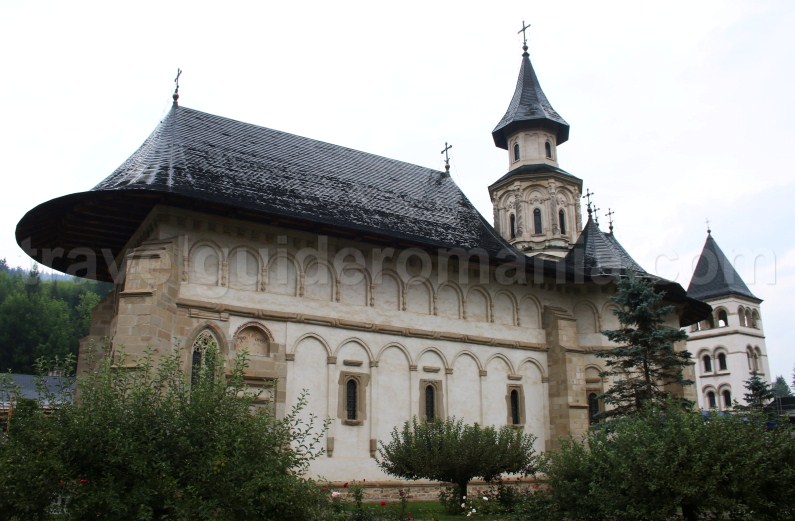 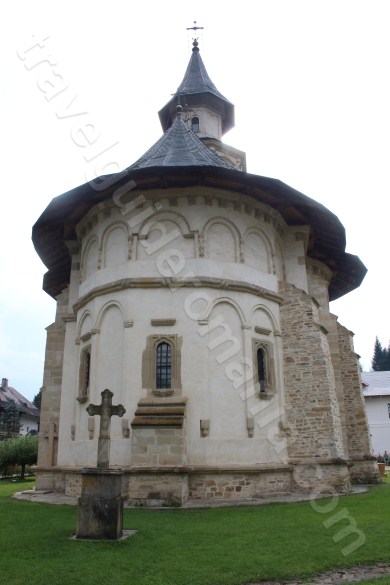 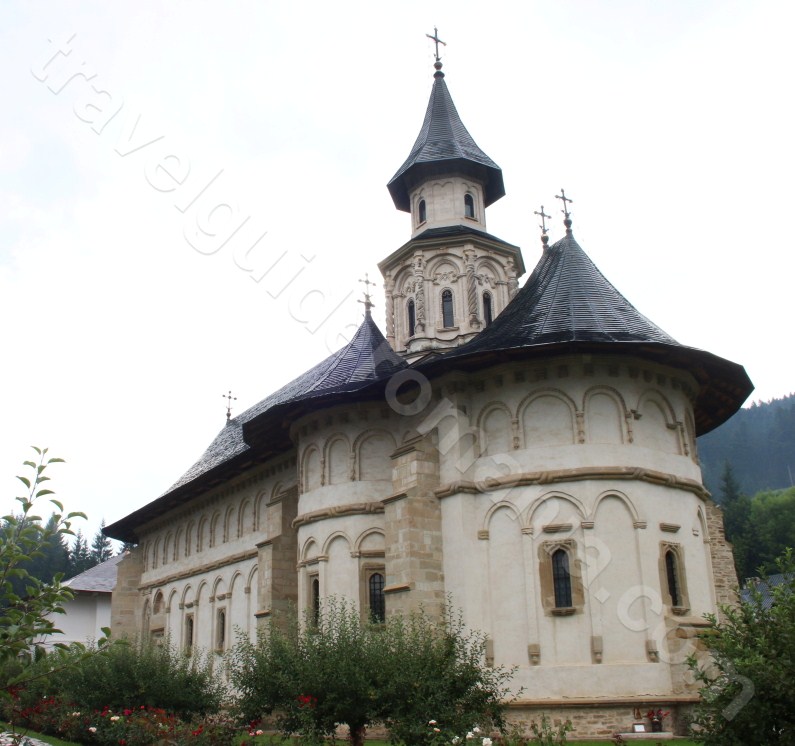 Access to the monastery is done on the eastern side, through the tower gate. This has on its exterior wall the Moldavian coat of arms – a bison’s head. 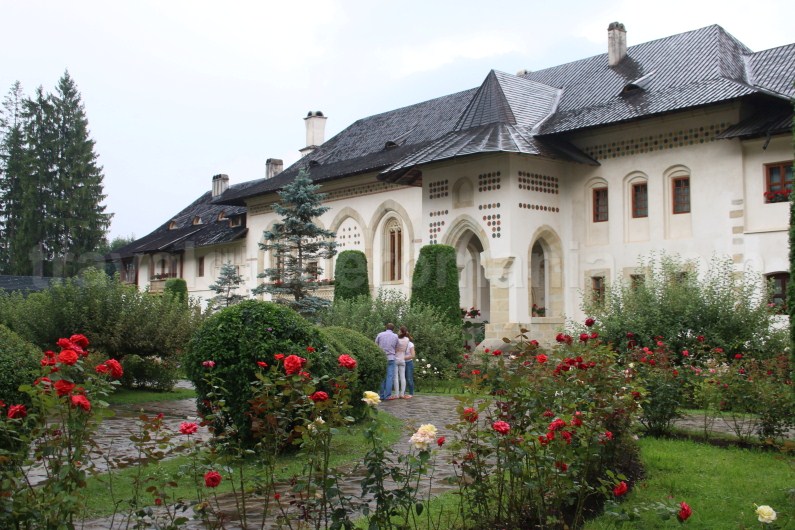 The monastery’s museum houses manuscripts, religious objects, and ceramics from the medieval era. The Byzantine-style embroidery collection sets itself apart.

The tombstones are beautifully crafted, covered with stone veils. 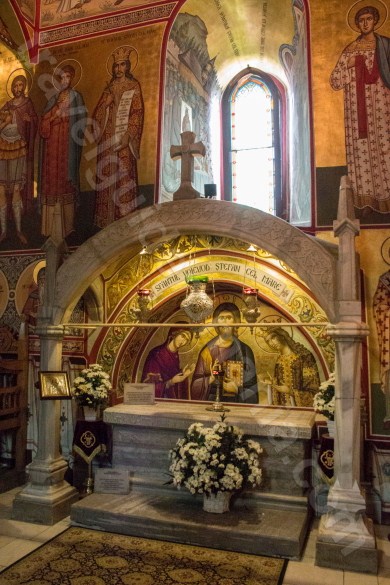 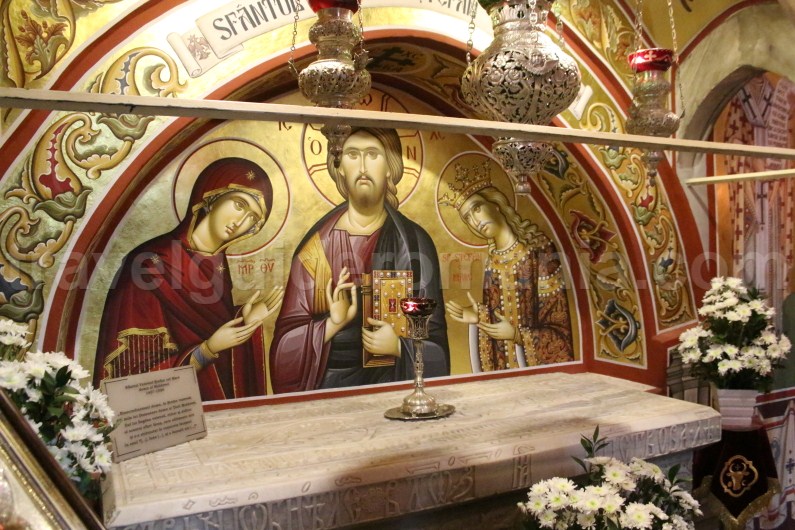 Interior church paintings are peculiar to the Byzantine style and were made in 1979-1983. Unfortunately, only a few samples remained intact from the old paintings. 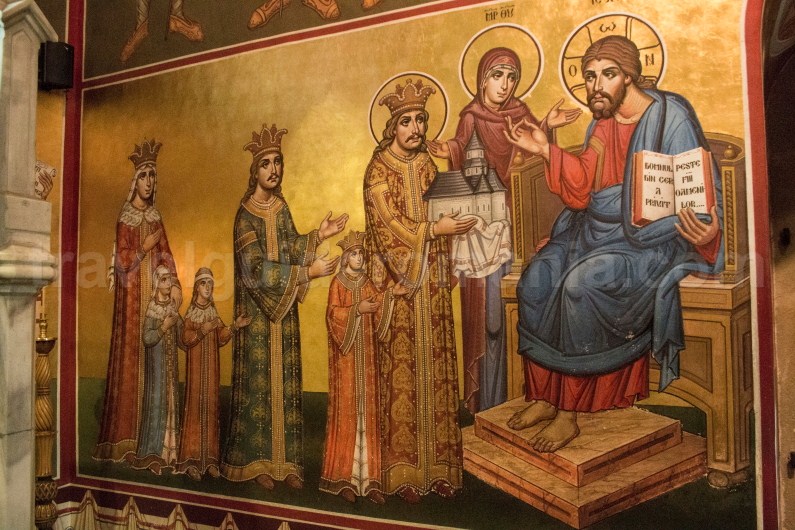 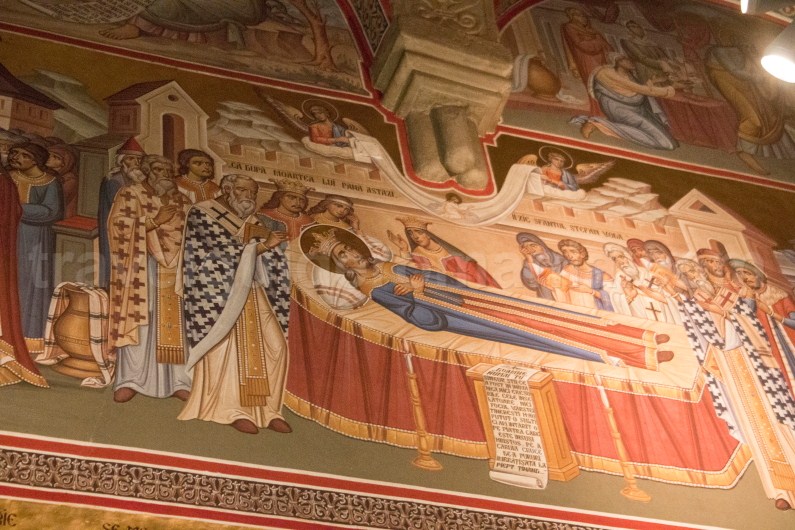 The Putna monastic ensemble is peculiar to the other Moldavian churches from the tourist circuit. They are neatly kept and they abound in tourists and believers. Avoid peak hours or the tourist season when visiting. 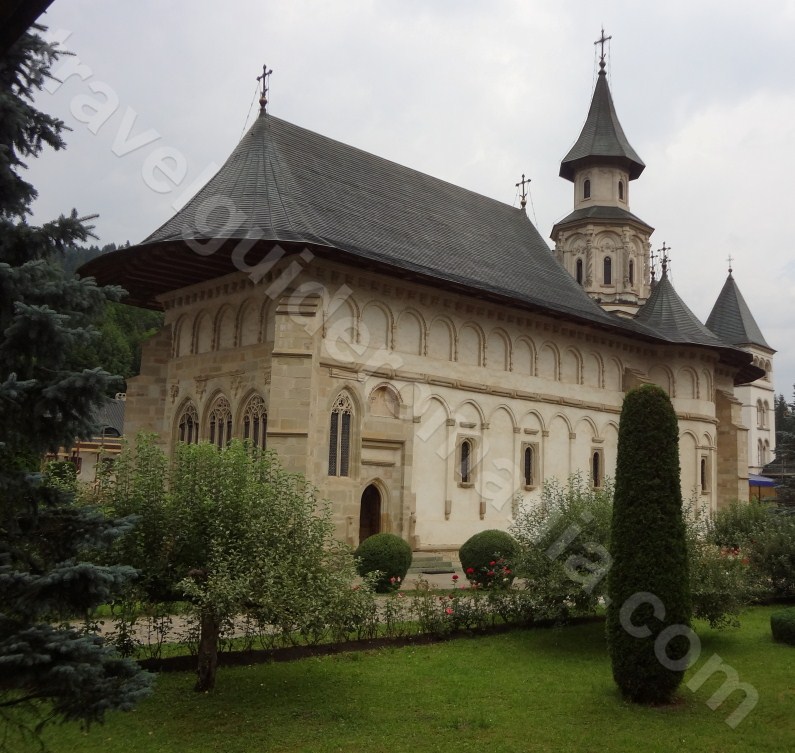