The Oratii Canyon is located at the foot of the Piatra Craiului Mountains in the Rucar – Bran passage, on the Oratii Valley. It is a dry canyon almost the entire year.

It has 11 verticals ranging between 2m and 12m.

Since the Oratii Canyon is located only at 24km from Bran Castle, we suggest you to include it in your trip around the Bran area.

The Oratii Canyon is one of the few places where you can do canyoning in Bran – Moeciu area.

If you wish that there is water on the canyon, you will have to traverse on spring, during snowmelt. The drawback is the low temperature in this season. 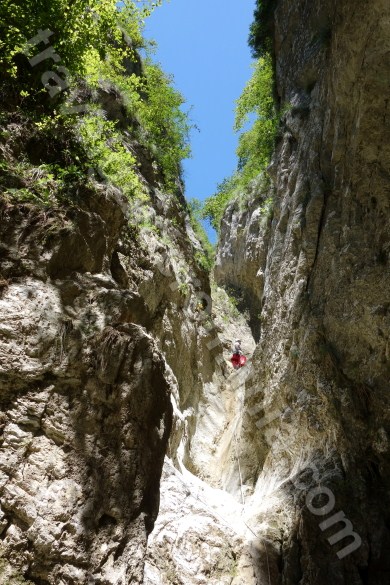 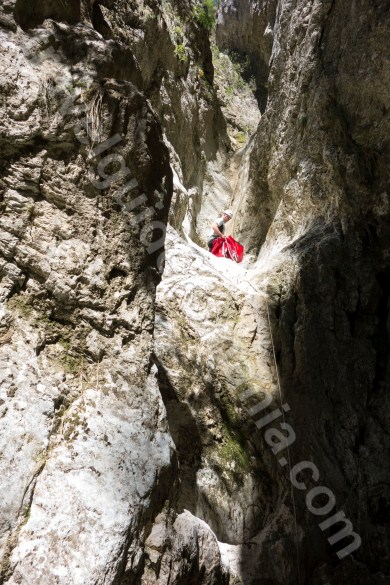 Access: coming from Bran (at 25 km), before entering the Podu Dambovitei locality you will have on the right a lookout point.

Enter the parking space and leave the car here.

*For an effective trip if have two cars, you can leave a car in the parking area and the other at the first store you meet in Podu Dambovitei. At the end of the trip, it will be easier to take your car from the parking lot from the lookout point.

The Oratii Fortress was mentioned in written documents since 1231. It is situated on a rocky peak and it watched over the old road which passed on at its base.
Due to its location, areas linking the commercial road between the Romanian Country and Transylvania Rucar area, The Podu Dambovitei was used as a customs transit trade.

Returning from the fortress’ ruins, on the right side you will see a small trail that enters the forest, the path that you will have to descend on.

Individual equipment needed: helmet, harness, lowering device, lanyard. We recommend the use of rubber boots and caving suit. Along the canyon we go through marmites or we do descents, and the equipment recommended by us offers comfort.

Collective equipment needed: 1-2 strap loops to anchor to the tree, 3 screw carabiners and two ropes of 30m. The canyon is generally equipped with fixed plates and studs. Only two verticals have climbing pitons but they are in good condition.

Recommended period: from May to October.

Trip duration: 5-7 hours, depending on the number of participants, physical condition and their technical preparation. 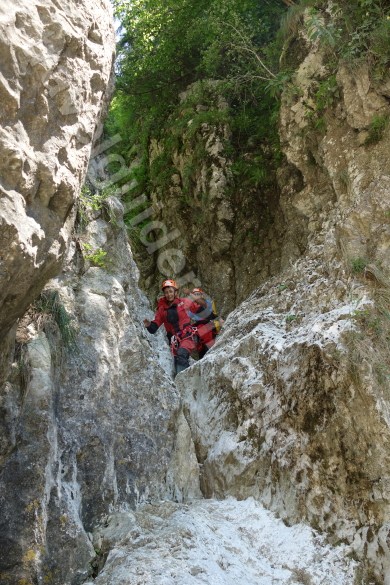 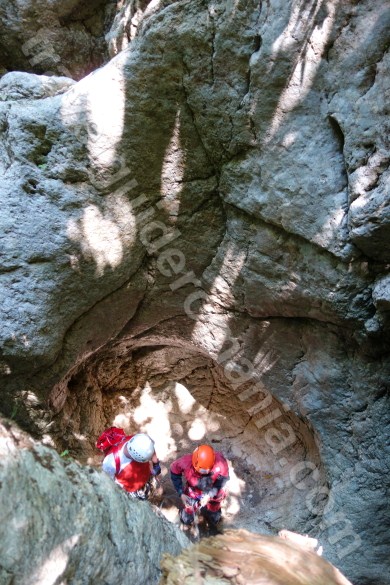 Getting down to the Oratii Valley from the citadel, you will reach the valley bottom, consisting of white limestone. Here we take on the technical equipment required.

Crossing the Oratii Canyon: after a short horizontal path through the valley we meet the first vertical passage. 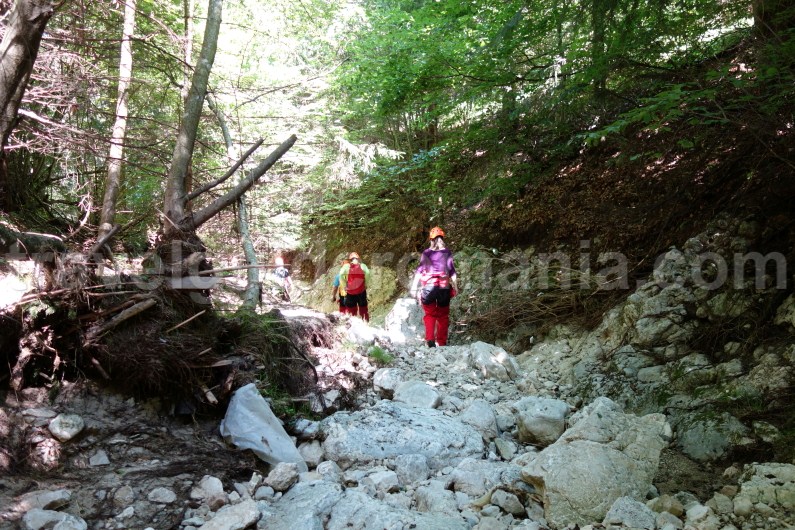 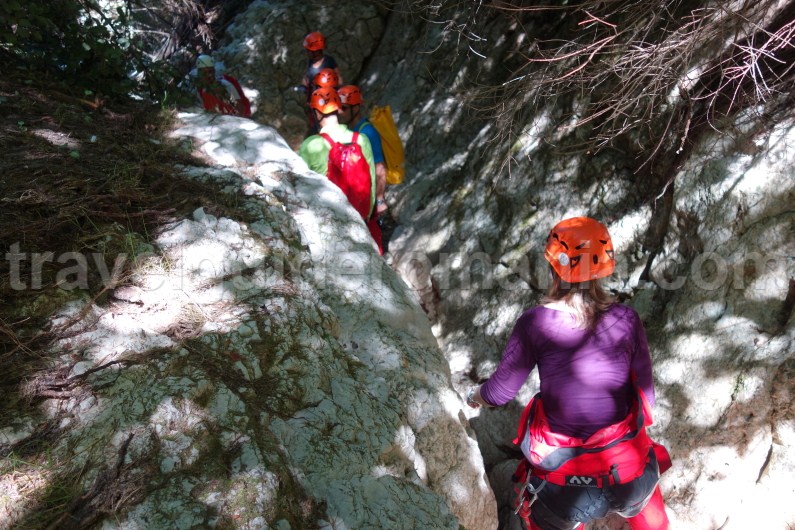 The first vertical has 3m and the shore binding used to get down is a tree located on the right side of the valley. We continue on the valley for about 5 minutes. We reach a large log over which the next rappel must be made. 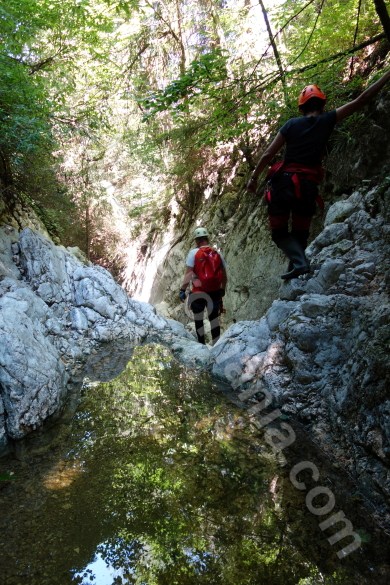 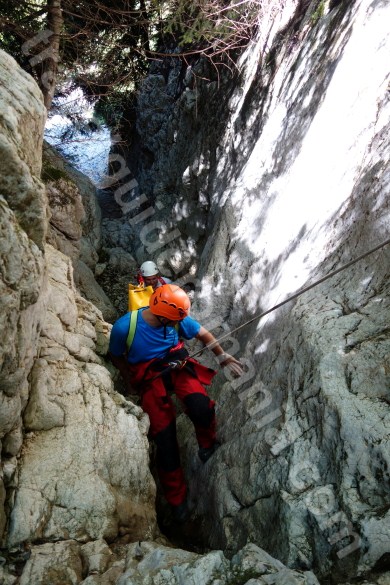 The second vertical: has 5m, and the rappel is made using two fixed plaques linked by a short rope. The drop position on the rope is slightly uncomfortable because of log over which the rappel is made. A beautiful marmite without water is found at the base of the vertical. From this area the canyon walls are getting narrower. 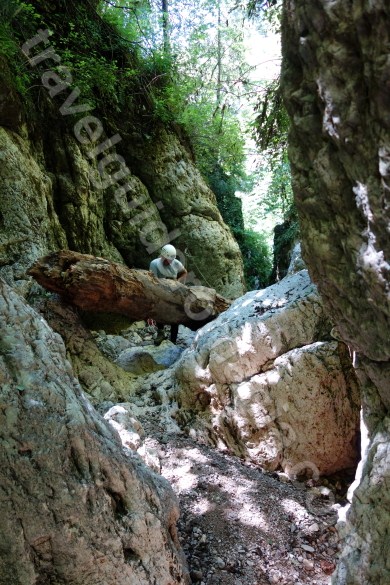 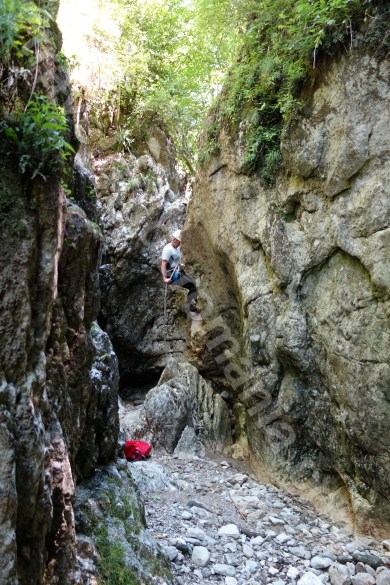 Third pit is formed by two small verticals, having two meters each. There is a mooring consisting of two plaques on the right side (Geographically), if you want to mount the rope. The passages can be traversed without any problem when descending. There aren’t difficult passages. We can help ourselves by the big boulders around us. 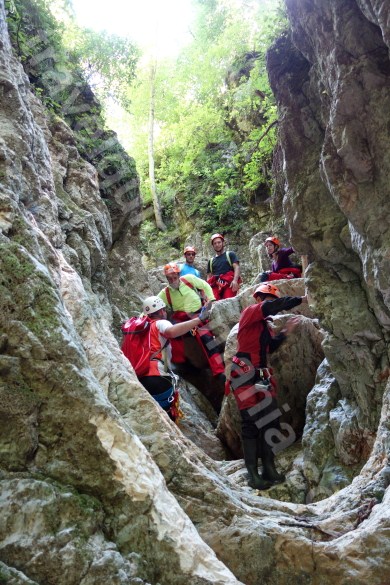 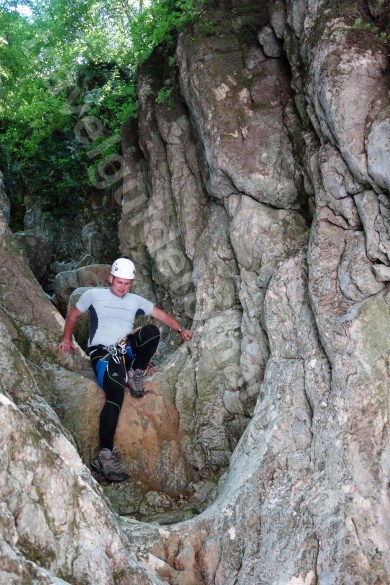 The forth vertical: has 5m. The anchors (two plaques linked by a ring) are located on the right side. At the base of the vertical there is a marmite with water that can be easily bypassed. We go down the valley and we have to descend a small jumper until we reach the most impressive canyon area: consisting of a 10m vertical and 12m one. 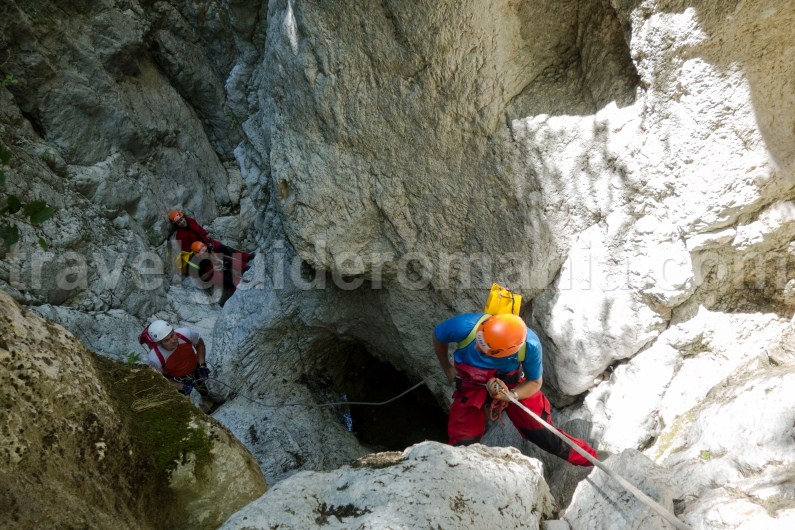 The fifth vertical: has 10m. The anchors (two plaques linked by a ring) are located on the right wall. 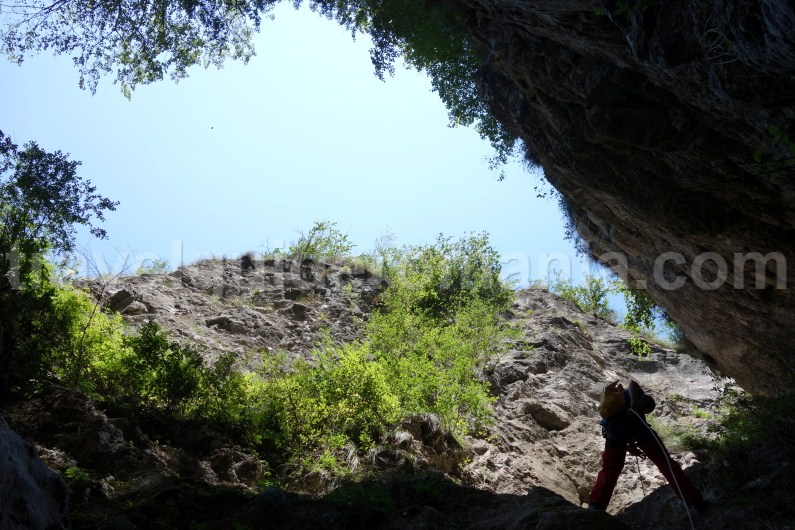 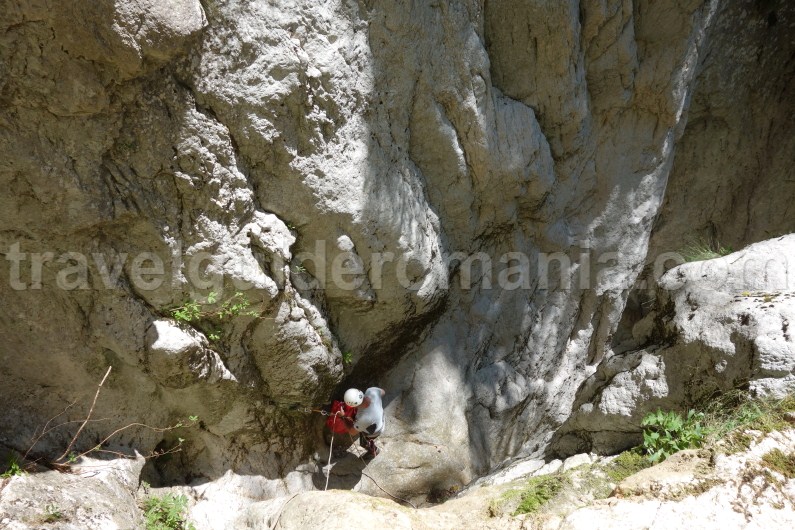 At the base of the rappel, in a marmite the head of sixth vertical waterfall is found. Attention here cannot regroup more than four people, the space being quite small.

The sixth vertical: has 12 m. It consists of two steps, the rappel is done in a single descent.

The Waterfall head anchors (Two plaques and a carabiner) are on the left wall. In this area, the scenery is spectacular, the walls reach up to heights of 30m.

We descend back on feet, without rope. The difficulty is low.

The seventh vertical: has 4m. The descent is on the right wall. The Waterfall head anchors are two plaques. 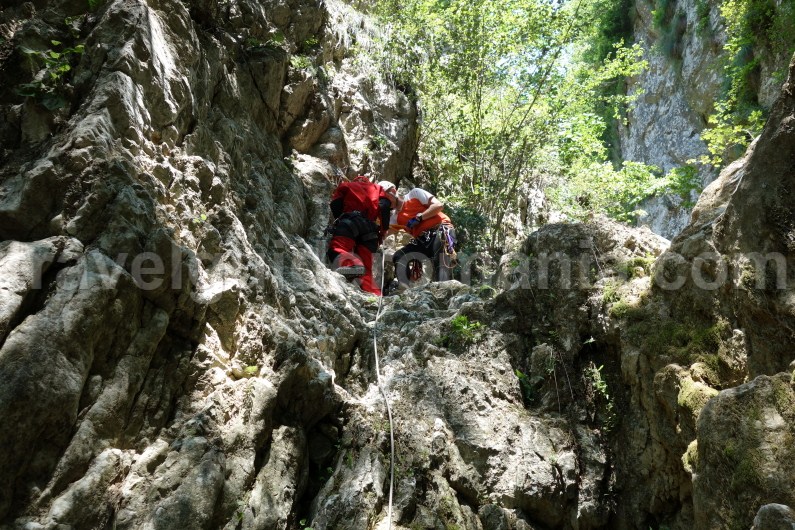 Eighth vertical: has 5m. The descent is done on the right wall. As anchors we have a plaque attached by a hook and a python. Downhill please check the state of the python to not be affected from a flood.

The ninth vertical: is very close to the eighth waterfall. It is 4m high and the descending is done by mounting the rope in a tree on the left slope (geographically speaking). We’re running to the exit of the canyon. 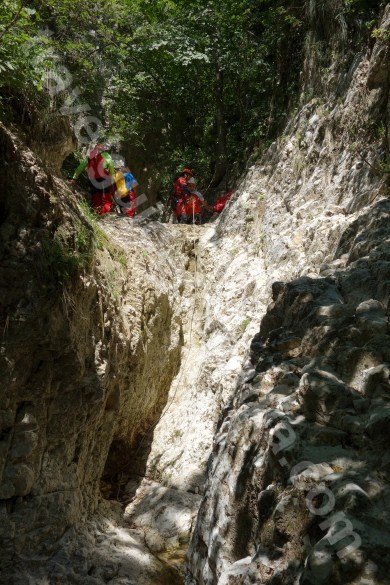 The tenth vertical: is an inclined plane, about 7 meters, which cannot be descended freely.
The rappel anchors consists of a ring and a python placed on the right slope. When descending please check the condition of the piton. 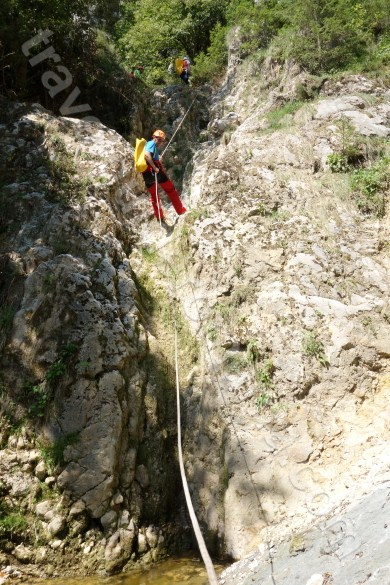 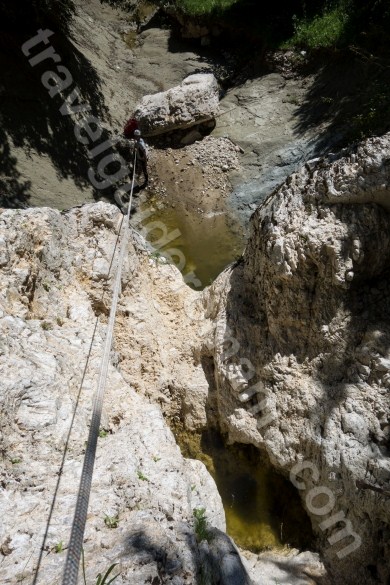 The regrouping can be done at the base of the vertical where also we take off our equipment.

The withdrawal from The Oratii Canyon is done along the valley. We descend through the rocks until we reach the village. On the way we met, we take to the right towards the center of the Podu Dambovitei village.

You walk about 20minutes till you meet the asphalted road. If you left the car near the store it will be easier to get the car from the parking lot above. The distance on the asphalted road between the two locations is about 6km. In the warm seasons, we can cool down with ice cream and cold drinks from the store.

We recommend that his trip ends with a visit to the Dambovicioarei Gorges.

They have a length of about 2 km. On the entrance a 2 lei fee must be paid to the administration of the Stone Mountains National Park.

The gorges’ walls will delight you with their heights of more than 100m, the valley with its water ice cold river water and last by not the least the Dambovicioarei show Cave, which we urge you to visit.