Speleology is the scientific study of caves. An underground cavity can be considered to be a cave only if it is large enough to be explored by humans. By convention, a cave must be at least 5m long and its width and height must not exceed its length.

Most caves were formed in soluble or „karstic” rocks. The term of „karst” comes from the Karst region in Slovenia and refers to an area with soluble rocks where underground landforms appear due to the chemical dissolution of the rocks.

Out of more than 12000 cavities known in Romania, there are a few which are part of a special category – the ice caves.All caves in Romania that contain year-round ice are located in the Apuseni Mountains. 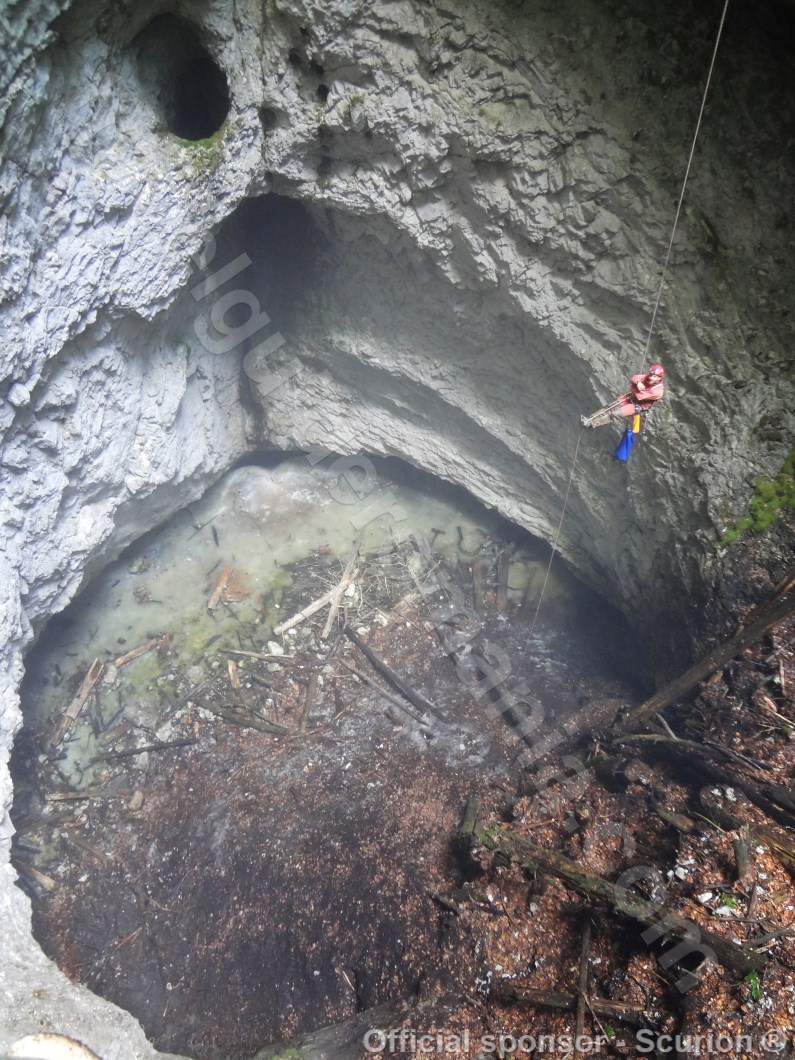 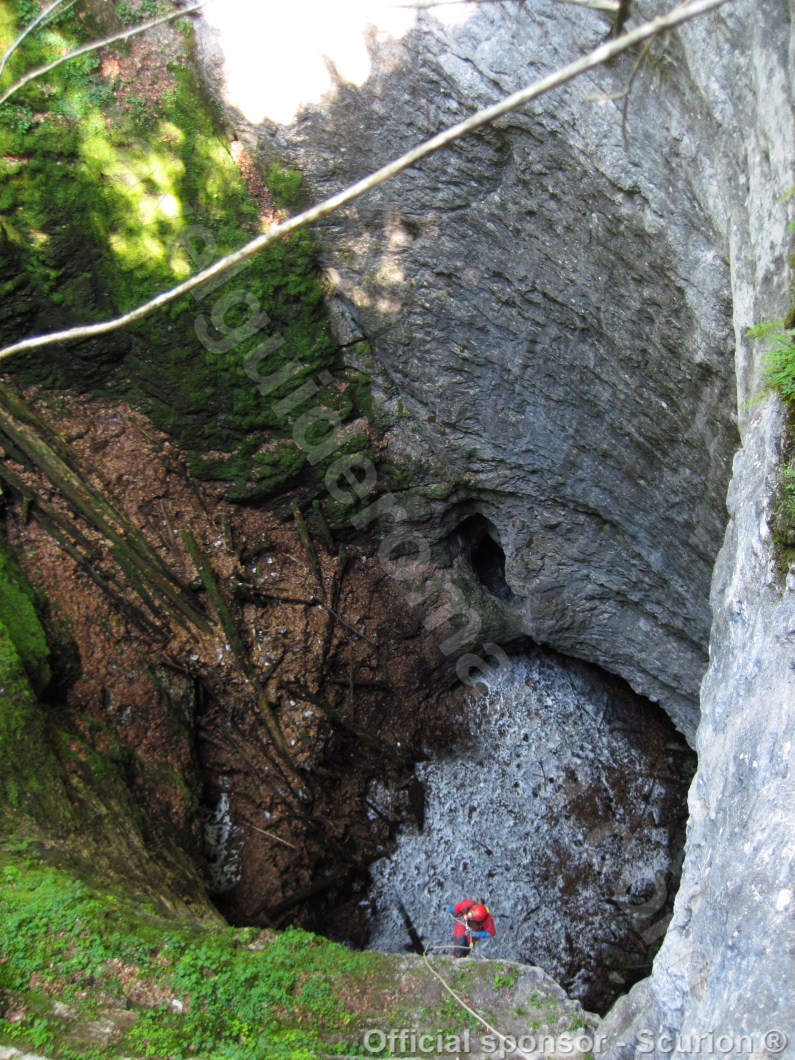 If it were to make a top of the Romanian caves by the volume of permanent ice they host, it would look like this: 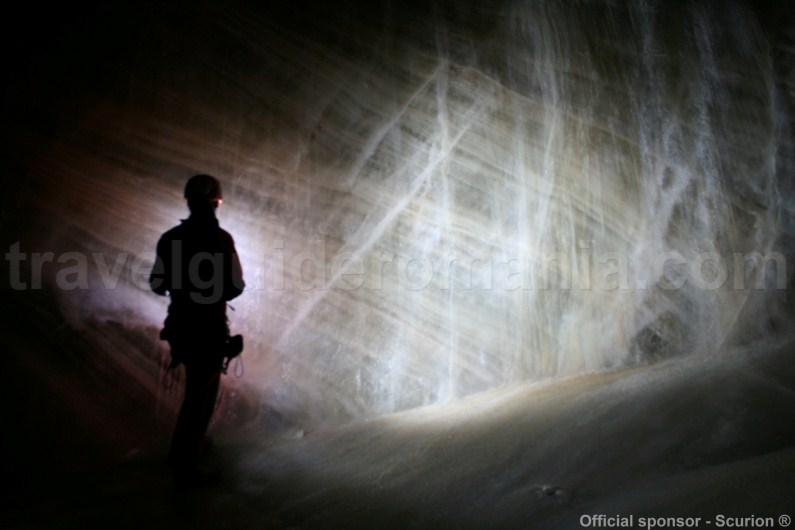 In many cases, the existence of year-round ice in caves is due to the high altitude of the caves.

However, the caves from our country that host year-round can do this due to the existence of a local glacial climate created by a very particular ventilation system.

General information: The Bortig pit cave is located in the Padis tourist area from the Apuseni Natural Park. The entrance into the cave is at an altitude of 1200m, on the ridge that separates the Galbena Valley from the Padis Basin. The cave is 150m long and 55m deep.

This pit cave also stands out due its large shaft entrance, which is 35m in diameter. 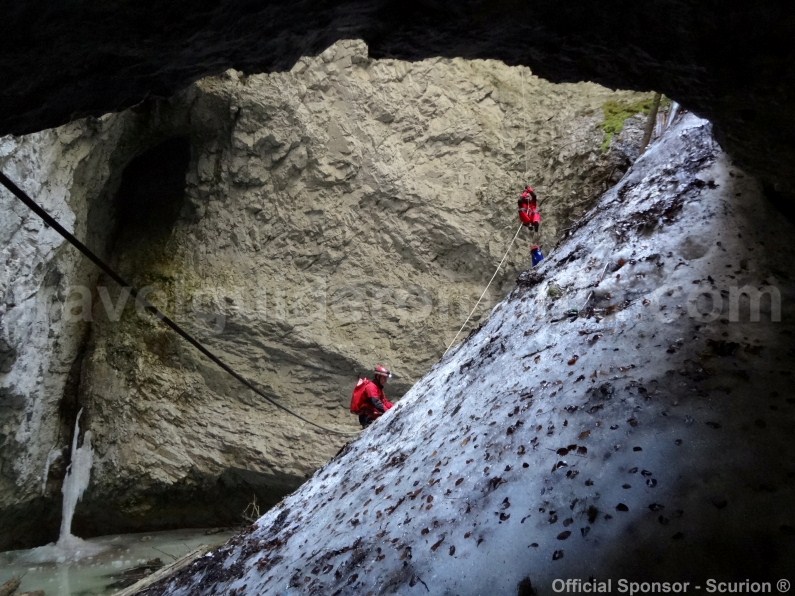 A study from 2010 determined that the ice block in the cave is 14m thick. Ice cores drilled into the ice revealed that the ice contains ash particles from the 1784 eruption of Laki volcano in Iceland. Based on composition, it appears that both the central block of ice and the sloping part of the glacier tongue date back to the last ice age.

Access: from Glavoi Meadow you have to walk towards the Cetățile Ponorului (Ponor Fortress) Cave following the blue dot and yellow dot signs. When the trail splits, you have to continue on the one marked with yellow dot signs which passes by the Bortig pit cave.

History of explorations: this pit cave has been visited by tourists since 1900 thanks to the explorer Czaran Gyula. Many access trails, stairs, and footbridges were built under his patronage, thus highlighting many natural attractions in the Apuseni Mountains.

In the Bortig pit cave there was set up a wooden ladder for easy access to the upper part of the glacier. From there, it was possible to descend to the base of the glacier using steps dug in ice. After Czaran Gyula passed away, the maintenance was not carried out anymore so the steps dug in ice slowly disappeared and the wooden stair eventually fell apart. 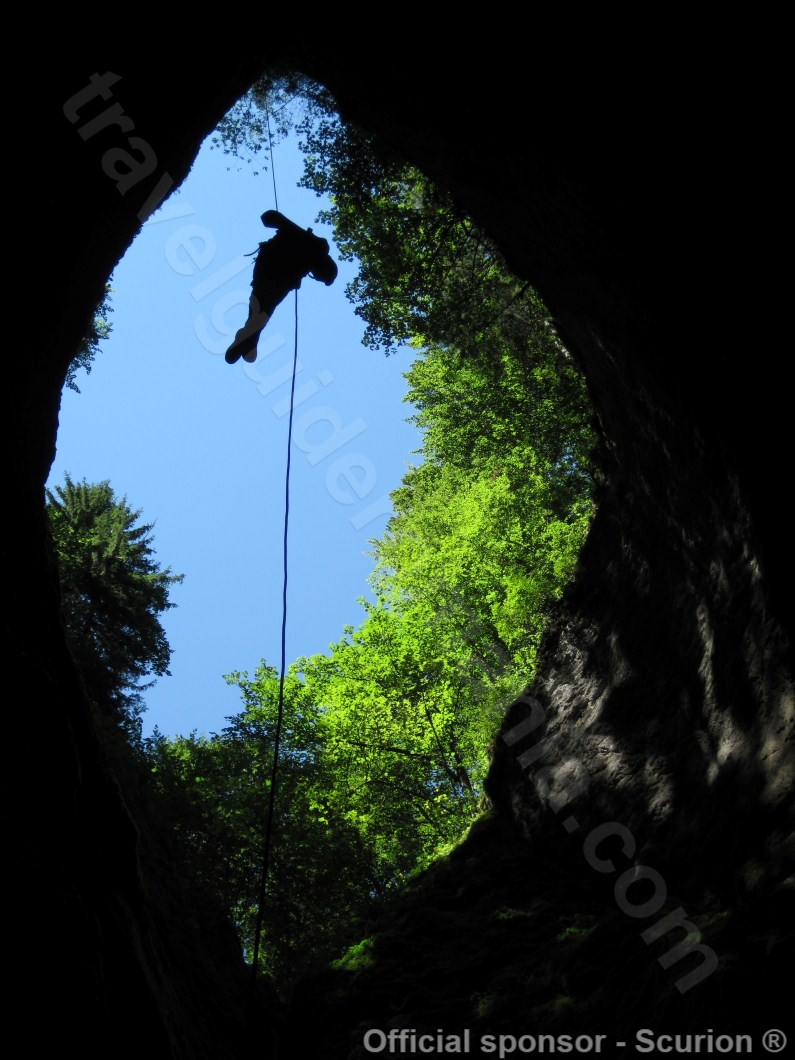 There is no ladder in the pit cave at the moment, so it is possible to enter it only using specific caving gear.

Attention! Do not try to enter the pit cave unless you are familiar with rope techniques for caving and you can rappel without any assistance. Also, it is important to have someone very experienced in charge of all the rope work needed for entering the cave. 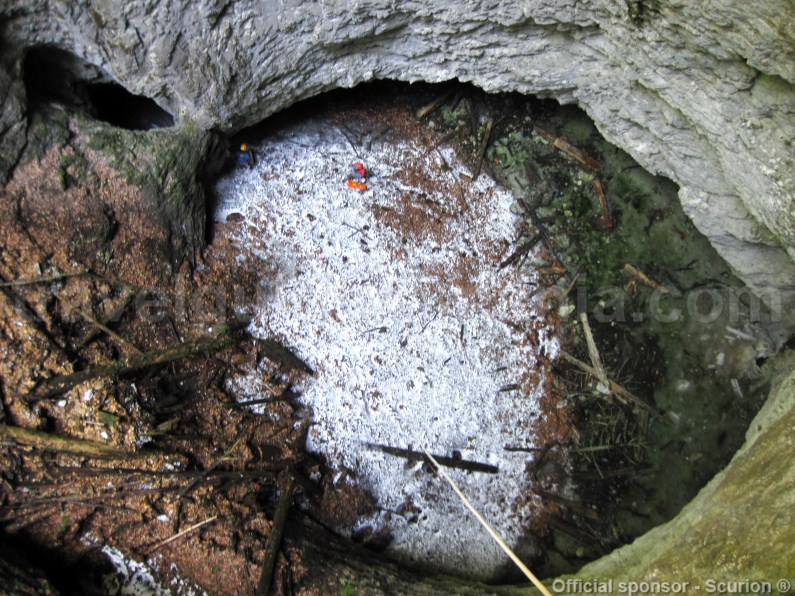 Descent options: in the upper part of the pit there are two different descent options. Both routes are bolted. If nobody in the group knows the access point into the cave, these photos should help you get oriented. The only difference between the two different access options is the number of pitches needed to get to the bottom (set up to avoid too much rope friction). 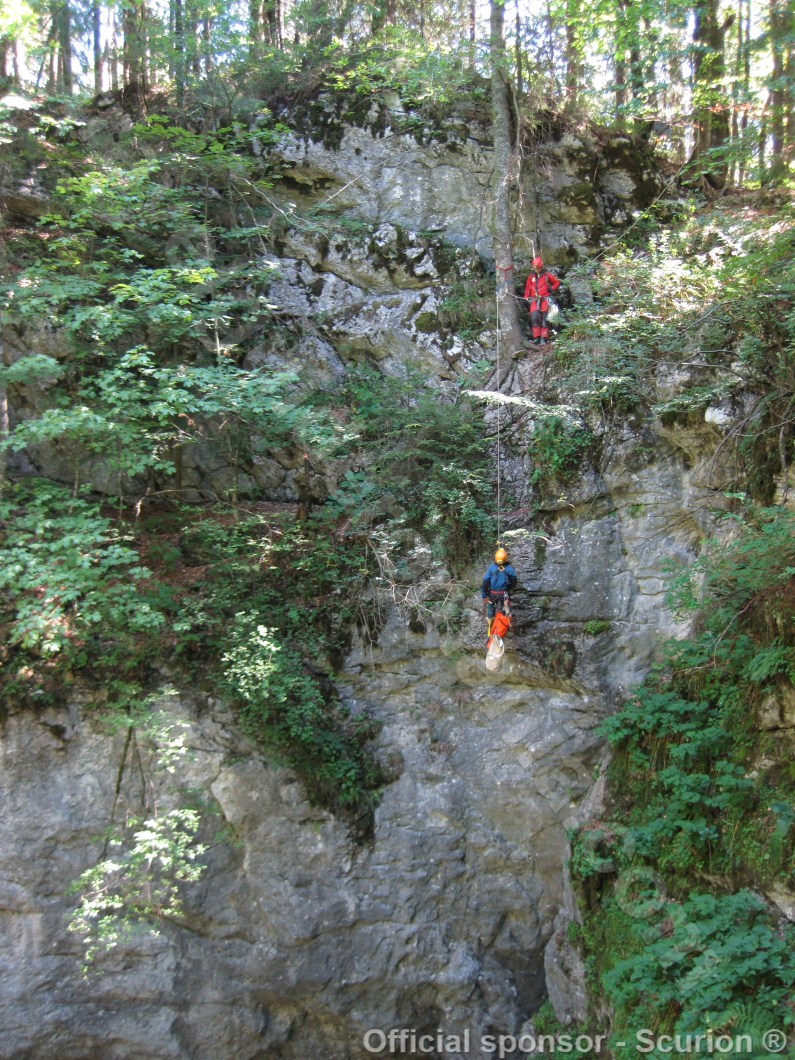 The first vertical drop is 38m. You will need to make multiple rappels on this section (see the attached sketch). After this drop, you will get to the upper part of the glacier.

From here, there is another 16m descent on the edge of the ice block. 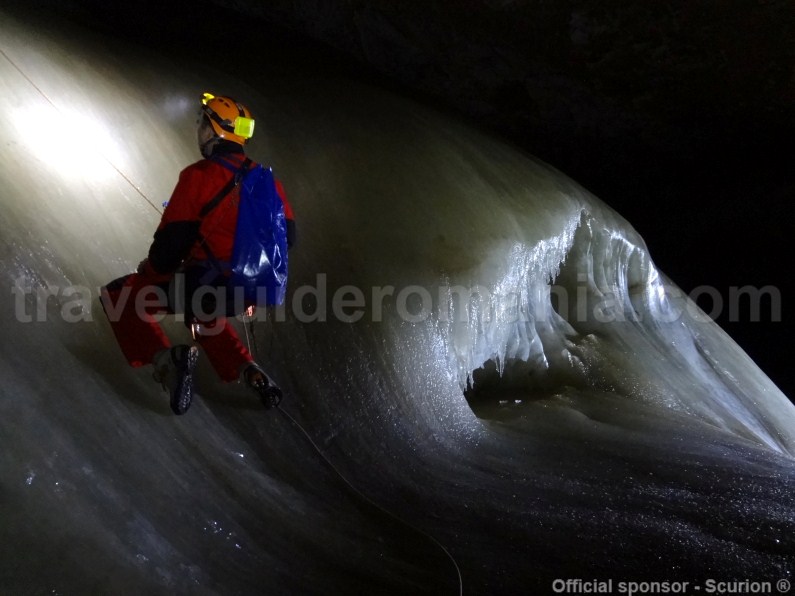 It is very important to tie the ends of the ropes together.You should remain tied into the rope while on ice to avoid any accidents due to slipping. After the second vertical drop, the team should regroup. From here, you can see the base of the glacier and distinguish the different ice layers formed over the years.

Required individual gear: caving overalls, helmet and head mounted light, descender, ascenders. We encourage you not to bring crampons because, in the long-term, they have a negative impact on the ice in the cave. If you are a large team, you can also bring a stove to make some hot tea at the base of the glacier. 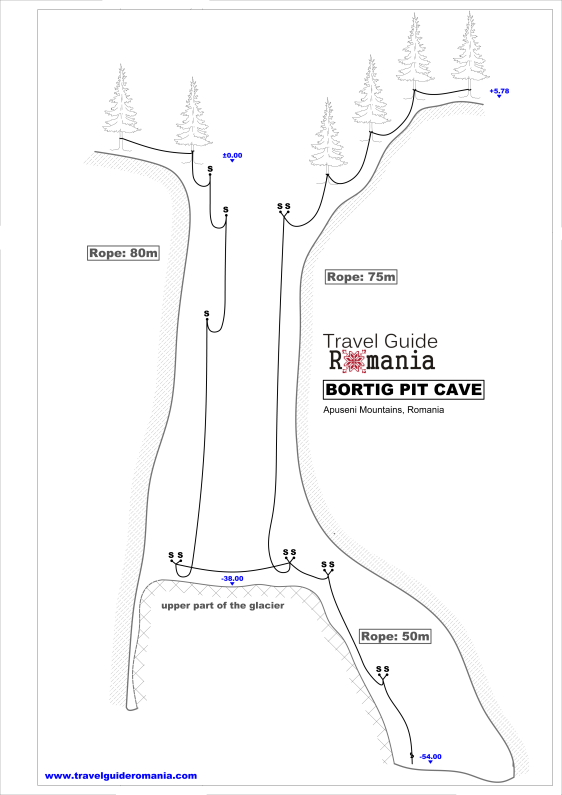 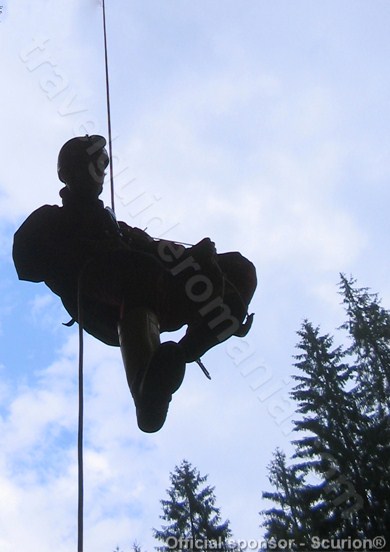 In order to go caving in the Borțig pit cave, you have to follow the approval procedure required to enter any cave in Romania:

1. Get approval from the Comission for Speleological Heritage;

2. Get approval from the Administration of the Apuseni Natural Park (+ pay a fee of 10 RON/person);

The time needed for visiting the Borțig pit cave will vary depending on the number of people in the group and their technical skills.

The caving trip can take anywhere between 4 and 6 hours.