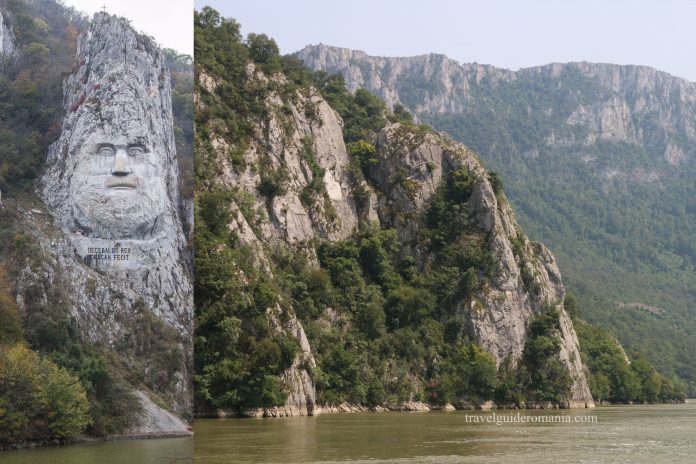 The Danube is the second longest river in Europe.

Enters the country at Bazias and flows into the Black Sea through its three arms Sulina, Chilia and St. Gheorghe forming the Danube Delta.

It passes through 10 countries and four European capitals.

The touristic area of the Danube comprises the longest defile in Europe–The Danube’s defile is about 135 km.

The defile starts from Bazias and ends at the “Iron Gates”, accumulation dam. The entire area is part of the Iron Gates Natural Park. Between Eșelnița and Plavișevița, the river has created the places with the greatest touristic attraction. (Cazanele Dunarii) The Danube’s Cauldrons.

The area includes two port cities where one can take boats to make cruises on the Danube. From the port city Moldova Noua there are tours Upper Gorge and from the port city of Orsova trips down the Gorges are organized.

Starting from Orsova by boat you will visit: The great Cauldrons, The statue of Deceabal, Tabula Traian plaque and Mraconia Monastery.

The great Cauldrons and the Small Cauldron are spanning approximately 9 km between the Plavișevița and Eșelnița localities. They are set apart by the Dubova Gulf.

The small Cauldrons are 3,6km long and are guarded by the Small Ciucarul Peak. The course of the river is bordered by the rock walls, the water having the depth up to 100 m.

The Orșova City, where the port of the small touristic ships is found is placed on the hills bordering the Cerna Gulf.

The settlement was resettled during the communist era when building the Iron Gates Dam. Following the lake formation seven settlements on the Serbian side and 10 localities on the Romanian bank were displaced. Most noteworthy where Orşova, Ada-Kaleh, Ogradena, Vârciorova, Tisoviţa, Plavişeviţa etc.).

Trip duration (round-trip) if you start from the Orșova harbor and go to the Mraconia Bay is 3 hours.

Embarking on the boat is either in town or in the area called Orşova Island.

Less than 2km from the start we move on above the Ada Kaleh Island. This island has been long disputed by the Habsburg Empire and the Ottoman Empire. In this regard, the Austrians built a Vauban fort in Ada Kaleh Island, but the island got back to the Otoman Empire and here a Turkish community was established. After World War I, the status of this population was unclear.

In 1923, the representatives of the Turkish community have called for the island to be part of the Romanian state. 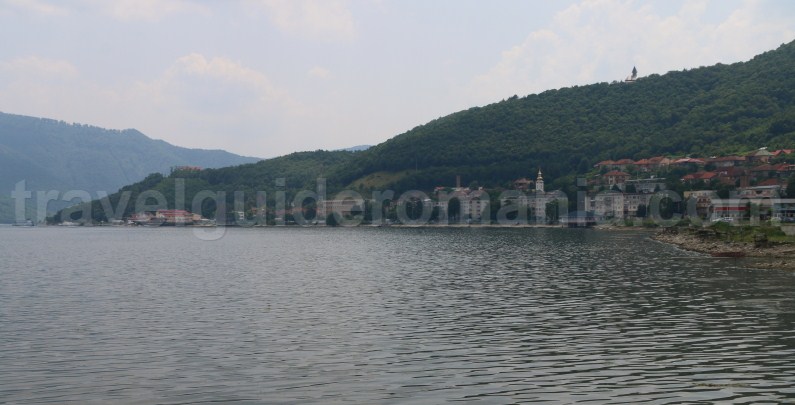 The heart of the old town Orșova is still submerged in the Danube’s waters.

From the boat, in the distance you can see the “mouth Cerna”, the place where Cerna flows into the Danube. We can pinpoint the location of the Orșova port.

As we advance upstream on the Danube, the villages are seen on the Serbian side.

It follows a time of about 40 minutes while the boat forwards on the Danube and we can enjoy the views of the two sides of the river.

When entering of the ship in the Small Cauldrons, on the serbian side the Tabula Traiana can be seen.

Tabula Traiana was dedicated to the Roman emperor Trajan in the year 103. It seems that  between the years 33-34 the work to the Roman Road on the right side of the Danube ended.

The roman road that was supposed to help conquer Dacia faster, was so narrow, that the carts could hardly pass in a single row. The biggest part of the roman road is nowadays sunken in the dam’s waters.

On the carved inscription in the rock, it is writing ”Caesar Emperor, the son of the divine Nerva, Nerva Traianus Augustus Germanicus, great pontiff, invested with the power of tribune, for the fourth time, father of the fatherland, consul for the third time, cut the mountain and made this road along the river”.

Shortly after the Tabula Traiana, we reach to the best known and most appreciated landmark from Danube Gorges, Statue of Decebal. 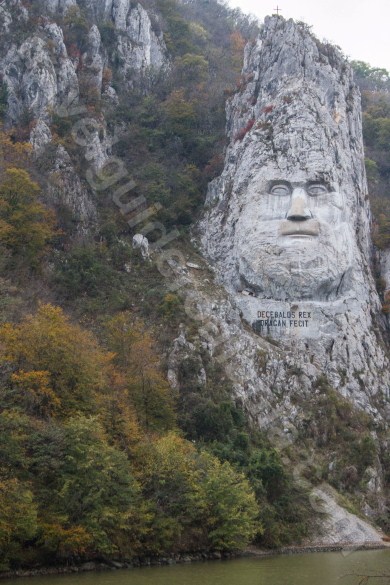 Decebal’s face is the tallest sculpture in stone from Europe.

40,45 m high and 25m wide, is the sixth tallest statue from the world. From the boat or from Danube Gorges, the statue of Decebal impresses by its dimensions. To this work attended 12 climbers-sculptors led by romanian sculptor Florin Cotarcea, native from Orsova.

The stone carving was carried out in 10 years, in 1994-2004. It costs 1 million dollars and was funded by the businessman and historian Ioan Dragan. The sculpture can be reached only on water.

It can be seen from the road bridge of the road DN 57 which is passing through the proximity of the statue. The sculpture of Decebal’s face was meant to be a reply to the Tabula Traiana located on the opposite bank of the Danube’s river.

We advance by boat, and at just 500 m from the two objectives seen already , in same Mraconia bay the Mraconia Monastery is found. It’s known under the name of the monastery under water.

The foundations of the old church (four-leaf clover shape), can be seen in water only when the Danube’s level is very low. The new church of the monastery of nuns Mraconia was built between 1993 and 2000. The church settlement was certified din documents in 1453.

After the monastery, the steep and rocky shores dominates. The length gorge in this area is 150m. 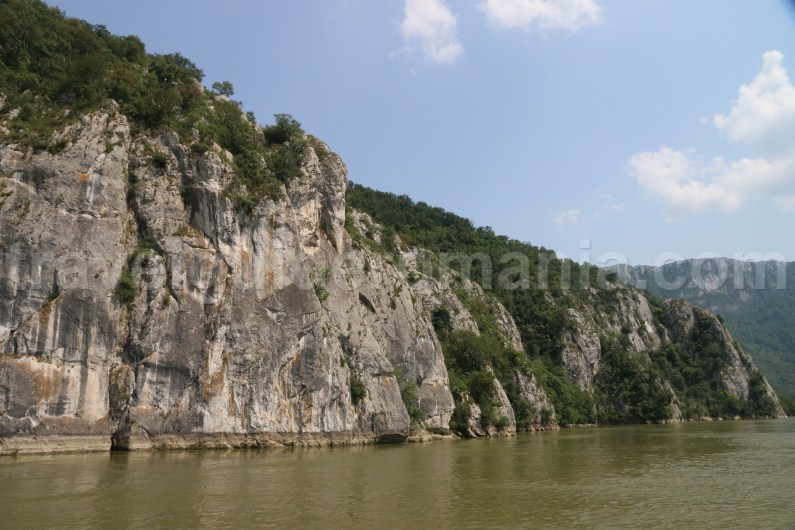 Continuing the journey upstream, the Danube widens in basin Dubova, where the town Dubova is located on its shore. Once with completing the 3,8 km through the great cauldrons, the boat backtracks to Orsova. In total, the route is about 30 km round-trip. For such a journey reserve yourself at least half a day.

For those who prefer to ride a car or cycling, you can go through national road DN 57. The road runs parallel with the Danube from the new Moldova to Orsova. An alternative that takes several days, but it may be the most interesting is Danube crossing from Bazias to Orsova by the kayak.

Useful advises for traveling by boat:

For boating there is the alternative of taking the boat from Mraconia Golf to Decebal’s face.

Also, if you are in the area, we suggest you to go to see hydroelectric from the Iron Gates but also the Museum arranged inside the Hydropower.

The Hydropower System and sailing Iron Gates 1 it was inaugurated on 16 may 1972.

This building is symmetrical, has two hydroelectric plants separated by the spillway dam. This one is 441 m long and has 14 overflowing apertures, the dam’s height is 74 m. The lake of accumulation have over 2 billions cube meters of water and a length of 120km.

The ships passing is made through the two locks, built symmetrically with regards to the dam’s axis. The hatching system is in two stages on the principle of communicating vessels (water’s level of difference is 30m).

Although it is not found on the tourist routes well known from Romania, this region has highly landscape potential. We recommend you to convince yourself. Probably the first time will be harder, after surely you will return willingly. 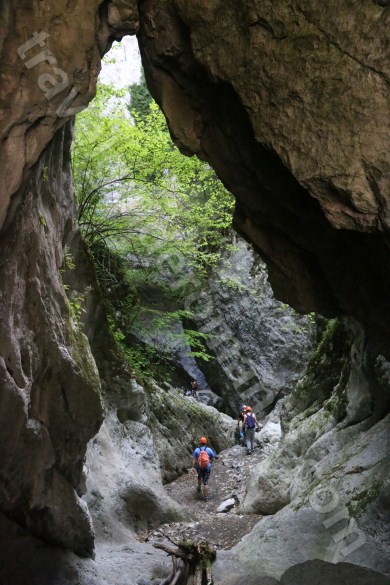