Barsana Monastery is one of the landmarks of Maramures. The reason being that, is the beautiful church and the other wooden buildings made by craftsmen from Maramures inside of assembly.

The Barsana Monastery church is one of the tallest wooden church in Romania, having 57m height. Also at Bârsana there is a second church which is part of the UNESCO world heritage. 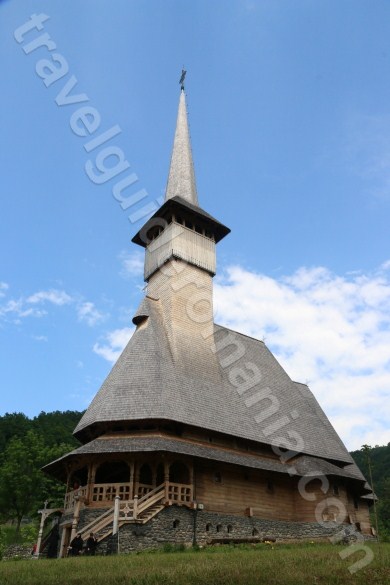 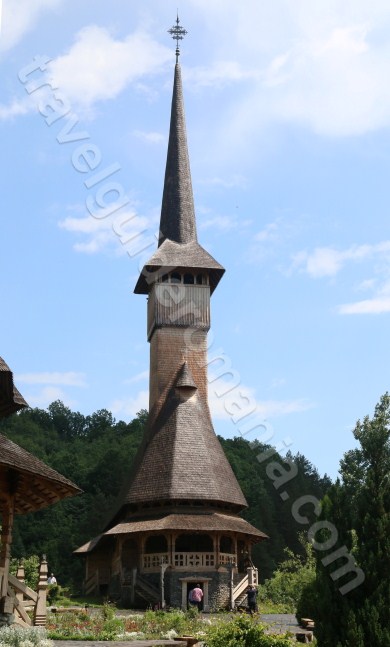 The whole monastery is in the Bârsana village. The village settlement is first documented in 1326. At that time the Hungarian king Charles Robert of Anjou issue a diploma through which the tenure rights for Bârsana are strengthened for the prince Stanislau Bârsan. He would get possession of the inheritance. 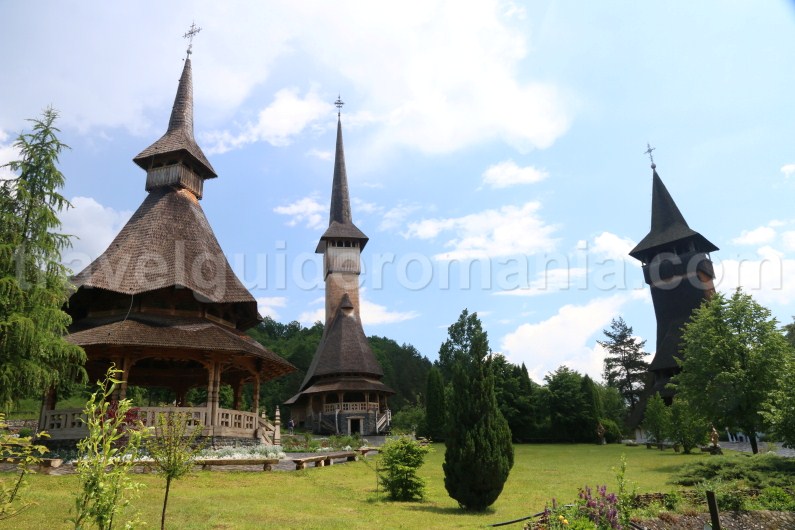 The Bârsana village is well-known for the presence of a monastery with wooden church since 1391.

In 1717, a Tatar invasion takes place. Because of the reponses from the Maramures locales, the Tatars burned the Barsana Monastery, the Cuhea church, the Dragomiresti Church, the Moisei church and several local houses. 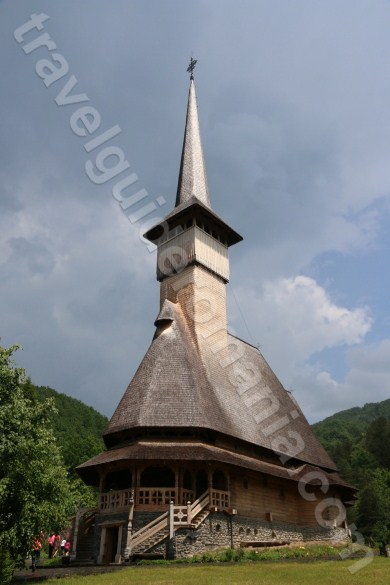 In 1720, another church of wood was been built in Bârsana. In 1791, the Monastery was abolished. On the hearth Monastery, only the Church and Abbey remain.

To protect the church from desecration and destruction, the believers from Bârsana moved it closer to the village, in 1806. In this place it is found nowadays.

The old church of Bârsana has a particular cultural importance, being included in the UNESCO list of heritage buildings. This church is a valuable historical monument and it expects to be returned in the old place and reassigned to the current complex of the Monastery of Bârsana.

If you visit the monastery of Bârsana don’t omit to visit the old wooden church which is actually the most important church’s settlement from Bârsana.

Unfortunately, few visitors know this and most of them just visit the monastery without visiting old church. Do not confuse the two churches! 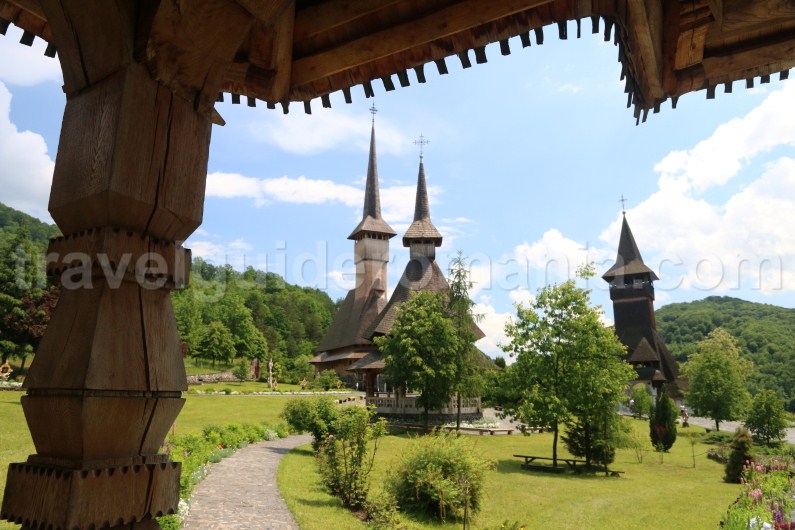 Barsana Monastery ensemble consists of: the New Church of the Monastery (“Synaxis of the 12 Apostles”), the summer Altar, Aghiasmatarul, the priory, the nuns’ house, the confessor’s house, the belfry and the museum.

The Beautiful Barsana monastery is taken cared of by the nuns. 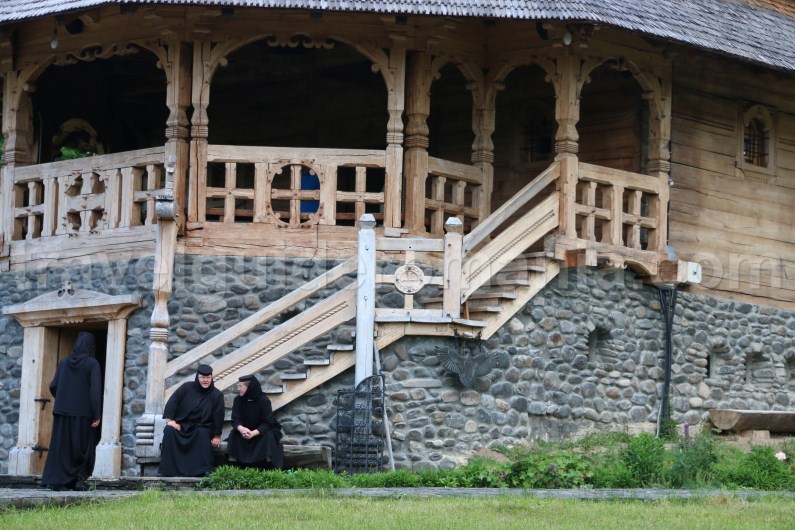 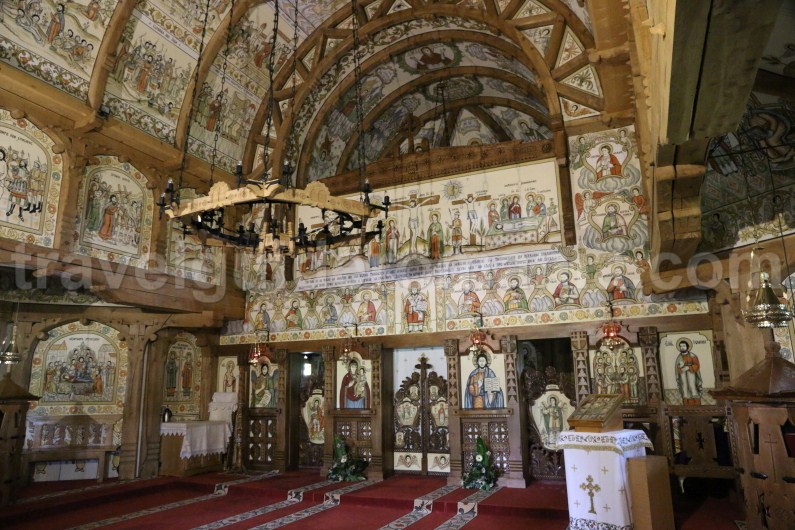 Access to the Bârsana Monastery: it is found at 23 km from the Sighet Marmaţiei town, on DJ 185, in Bârsana village. In front of the Monastery there is a big parking lot where you can leave your car. 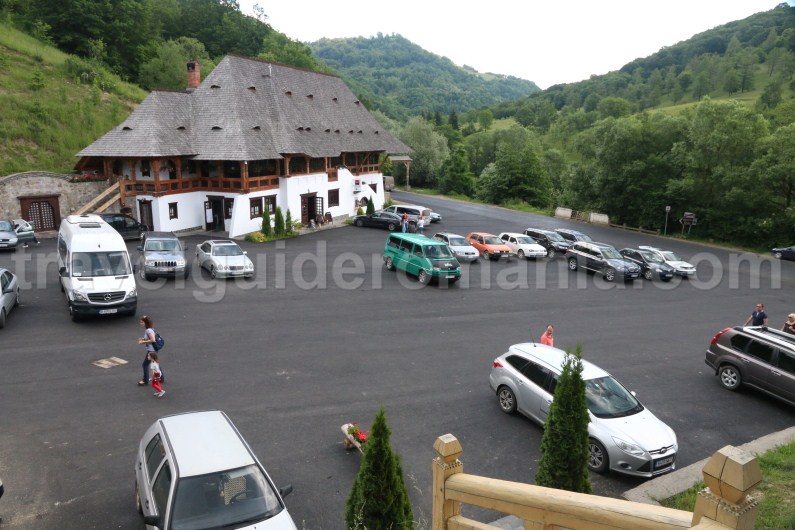 We climb on a road for about 100m and we arrive at the main entrance of the Monastery, at the belfry. 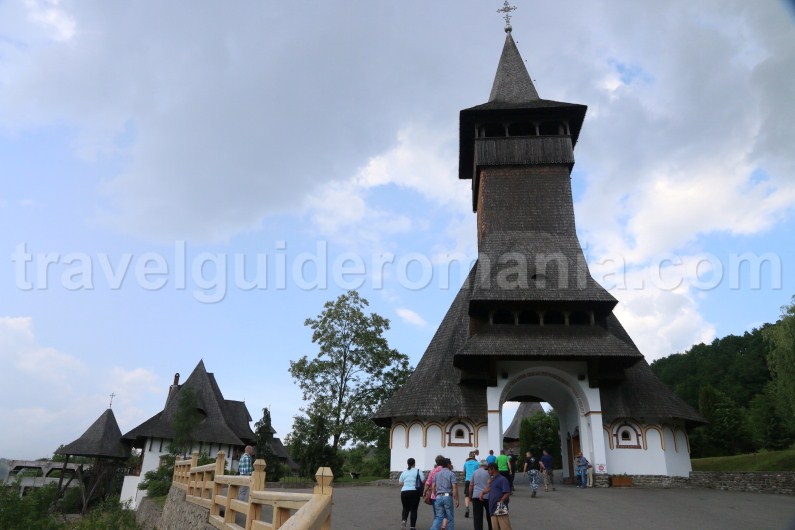 The new Church was built between 1993-1995. It is located in the eastern part of the Monastery complex and it is intended for the worship of the cult. It is also in the same time, the spiritual and compositional center of the whole ensemble.

The church was designed in the following sizes: 22,57 meters long, 12,20 meters wide and 57 meters high. It is among the highest wooden buildings in Europe. 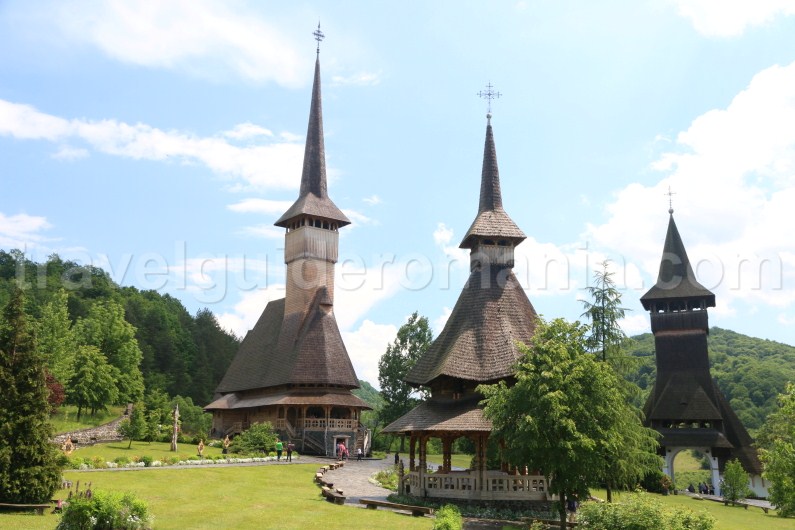 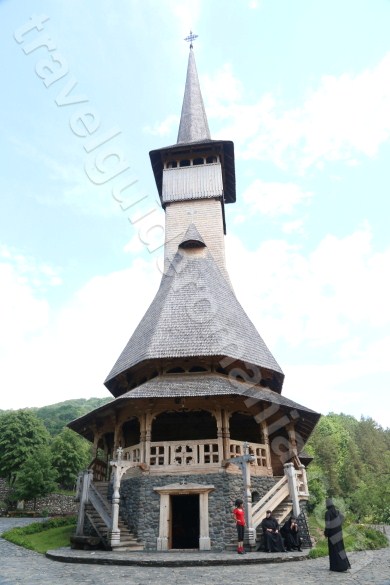 The church building has two floors: basement and ground floor. It has all the spaces characteristic of Orthodox church: the veranda, the narthex (vestibule), the nave, the altar.

At the entrance, the veranda is built of oak carved with ornaments specific to the Maramures art. In veranda, which is located above the basement you can reach from the two side stairs.

The tower is placed above the narthex and is equipped with gazebo and long helmet. The fir tree shingle roof is made in style “dovetail”. It has double eaves and is forming a true wood lacing.

The iron cross has a height of seven meters and weight of 5 hundred kilos. 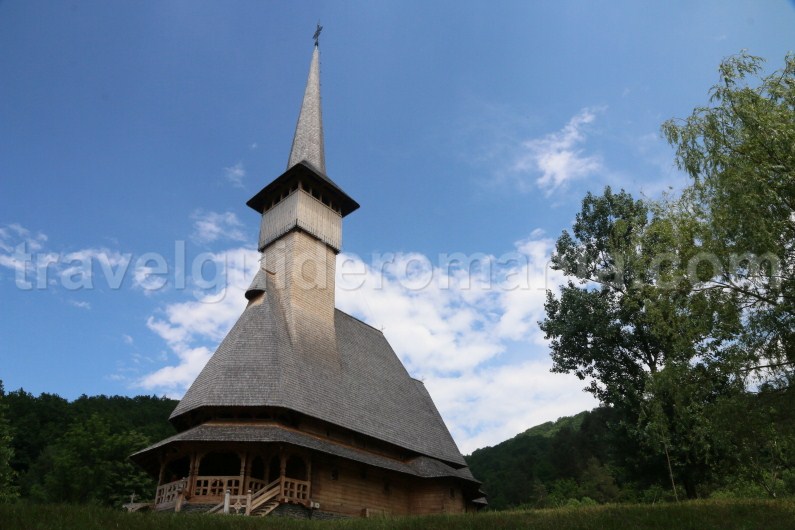 The Summer Altar was built between 1996-1997. It is made out in the same specific style of popular architecture in Maramures. It’s placed in the middle of the monastic assembly, pivoting the rest of the buildings. Here, the summer jobs are held in. 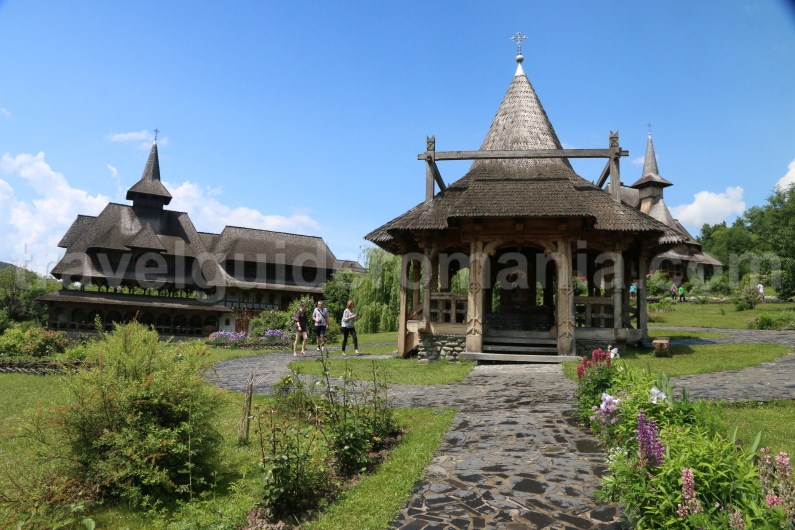 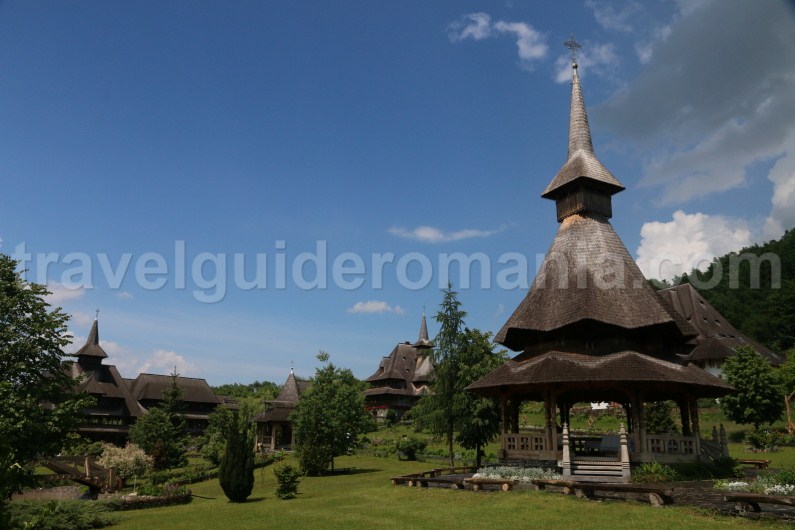 Nuns’ house is located in the north-west part of monastery ensemble. It is a building with three levels: the basement, the ground and the first floor. The building has in front of each level, terraces adorned with flowers. 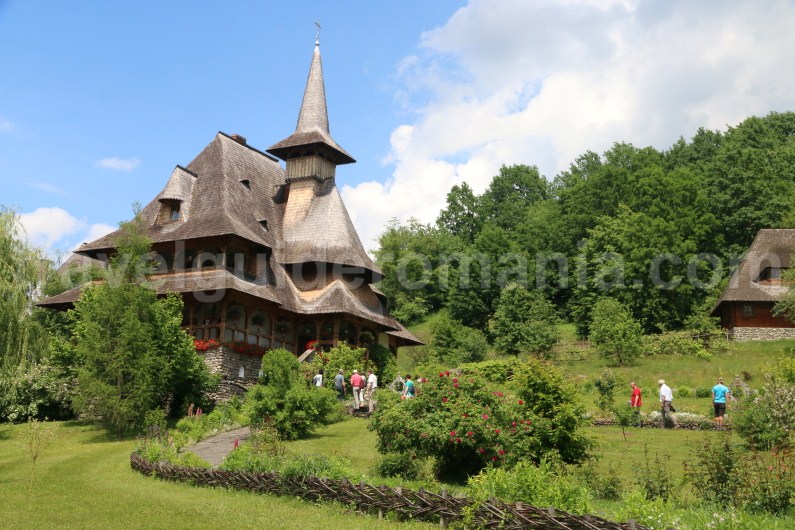 The Aghiasmatar completes the whole monastery ensemble and it is in a central location. It has four entrances and a fountain in the middle. It evokes the annex buildings, besides the paleo-christian basilicas in which the holy water and was committed and kept. 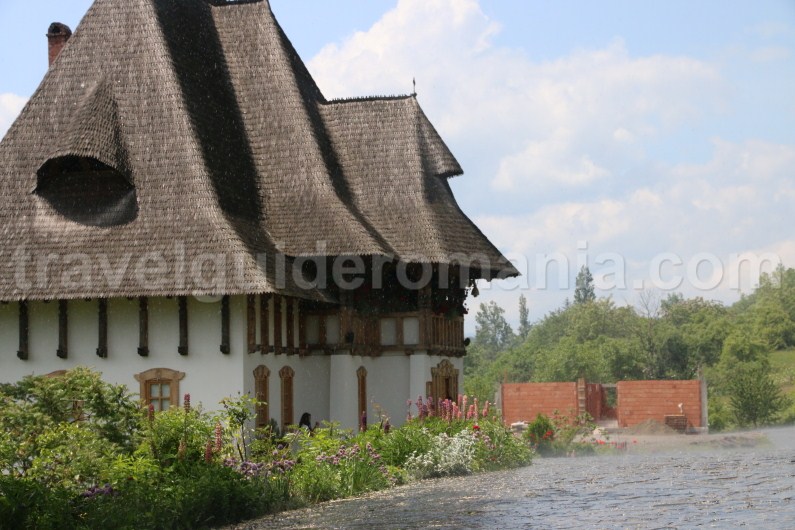 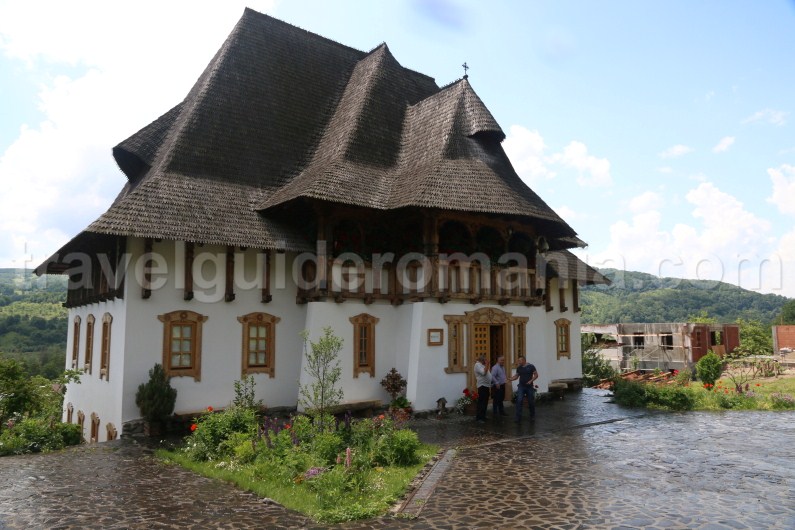 All the monastic buildings from Bârsana were built in Maramures popular style. The Inside of the monastery is very neat so a visit here you will surely enjoy. 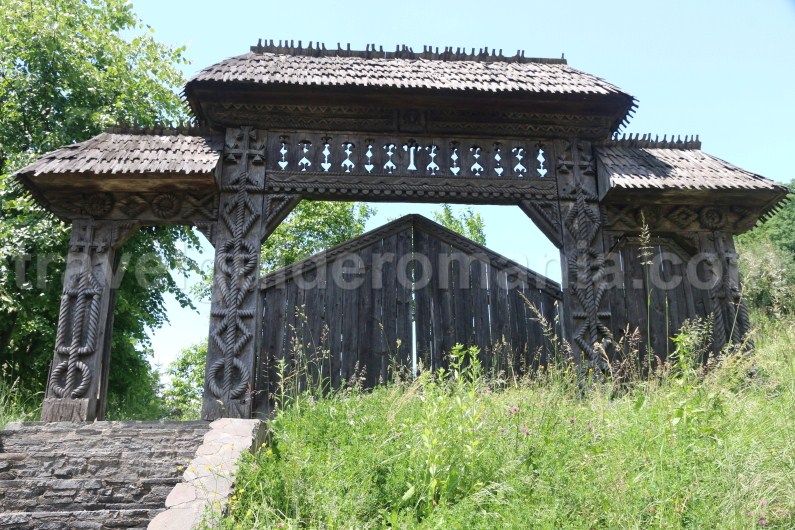