Tara Hațegului is one of Romania’s regions with a priceless historical luggage and natural landscapes. One of the main attractions of the region is the ex-capital of Roman Dacia: Sarmizegetusa Ulpia Traiana 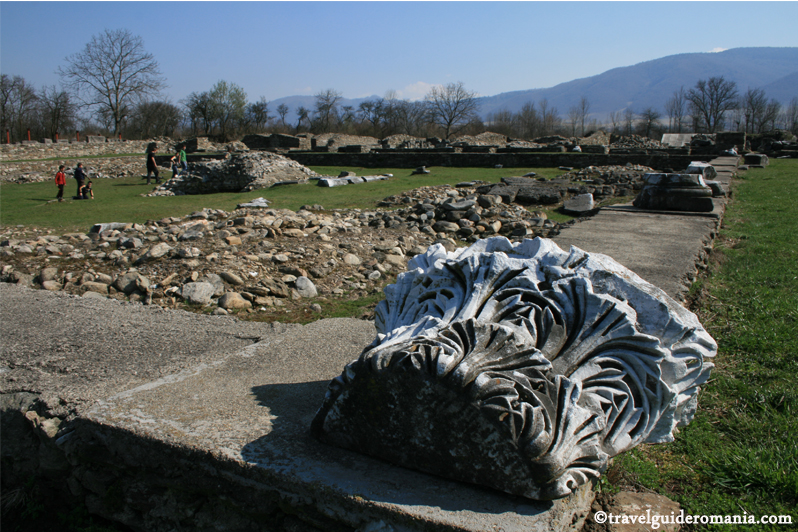 A short history of the place

Back in the day, when Dacia was ruled by Burebista (82 – March 15th, 44 B.C. – when he was assassinated) and inhabited by Geto-Dacians, its territory was stretching from Black Sea in the East, the Danube in the South and Slovakia’s Mountains in the West. After Burebista’s death, Dacia was divided into 4 states. 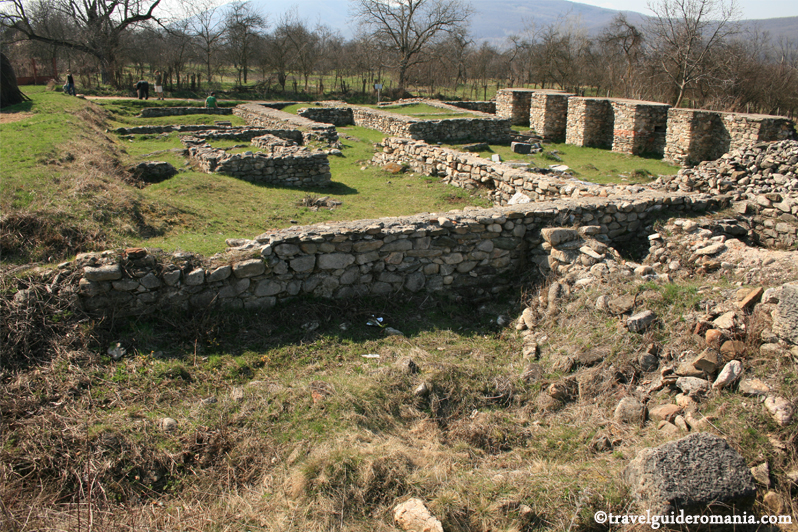 In the first military campaign, c. March-May 101, Emperor Trajan (who ruled from 98 to 117 A.C.) launched a victorious ship into the Dacian Kingdom. He crossed the northern bank of the Danube River and defeating the Dacian army (led by King Decebalus, king from 87 to 106 A.C.) at Tapae (today Sarmizegetusa commune, in Hunedoara county), near the Iron Gates of Transylvania.

After the second war won against the Dacians, in the summer of 106, Trajan sets the base of a new Roman province. 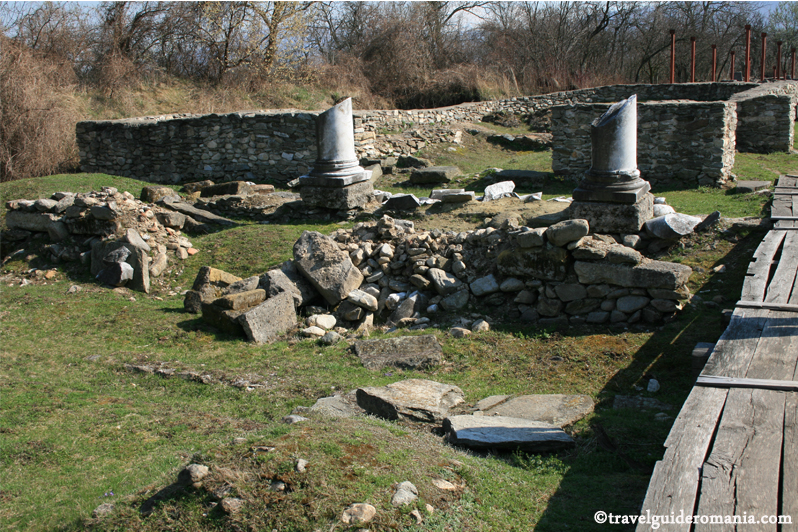 The administrative life is reorganized so that between 108 and 110 a new capital of the conquered Dacia is being built: Sarmizegetusa Ulpia Traiana. Symbolical, the name of the Roman capital is an innuendo for the Dacian capital (Sarmizegetusa Regia) which is situated in Orăștie Mountains, 40 km away – do not make a confusion between the two! 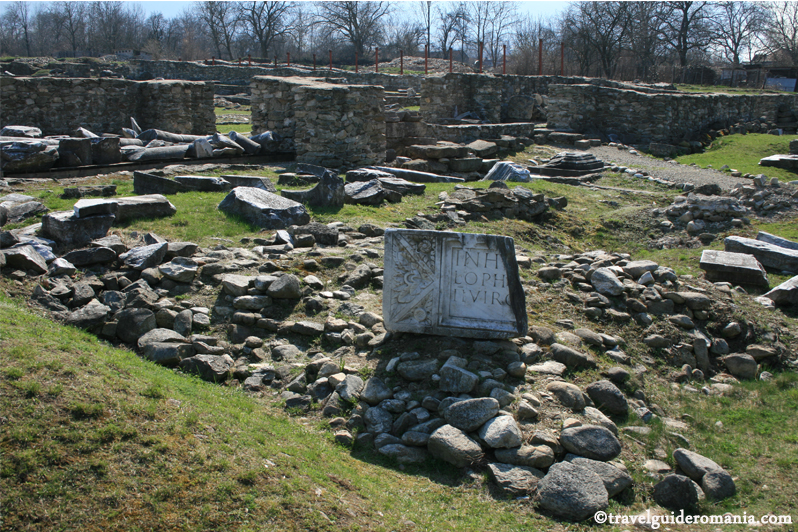 One of the monuments that commemorate the Dacian-Roman war is Trajan’s Column from Rome and Tropaeum Traiani (Adamclisi) monument built in 109, in Dobrogea, Romania. 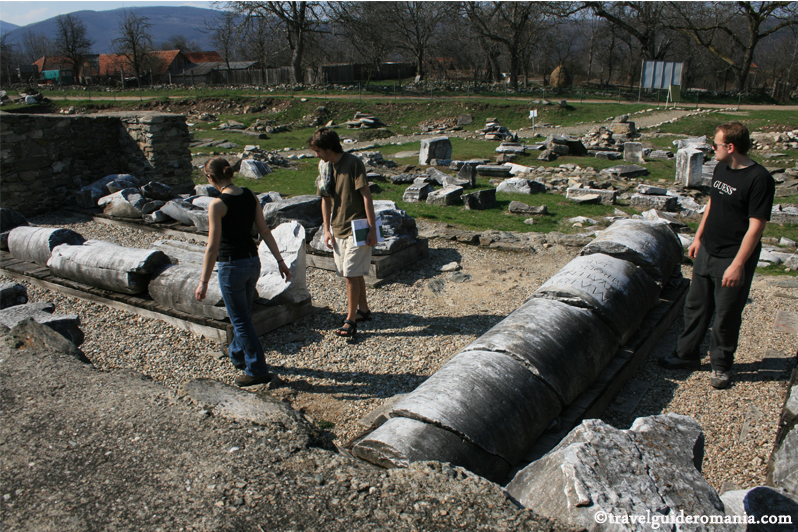 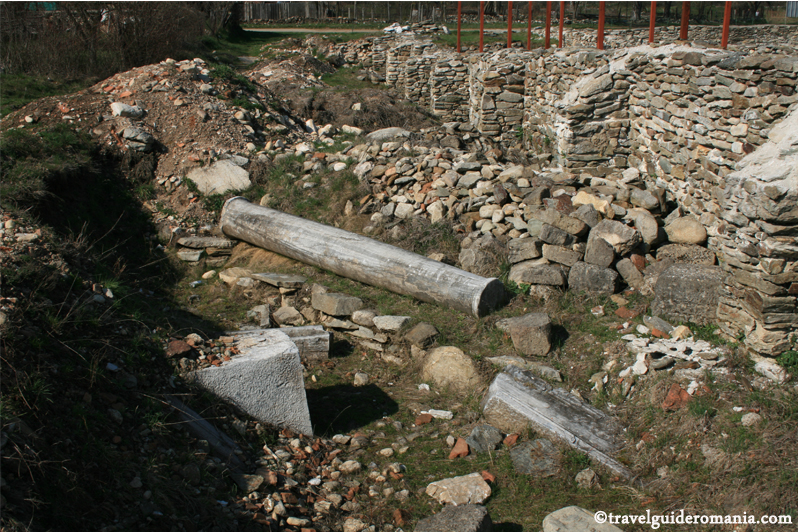 Once you get to the village with the same name, you’ll find plates that lead to the touristic attraction.

The fee for visiting this objective is between 5 and 10 Lei, depending on the visitor’s status (child, student or adult).

A parking lot is also available for your car. 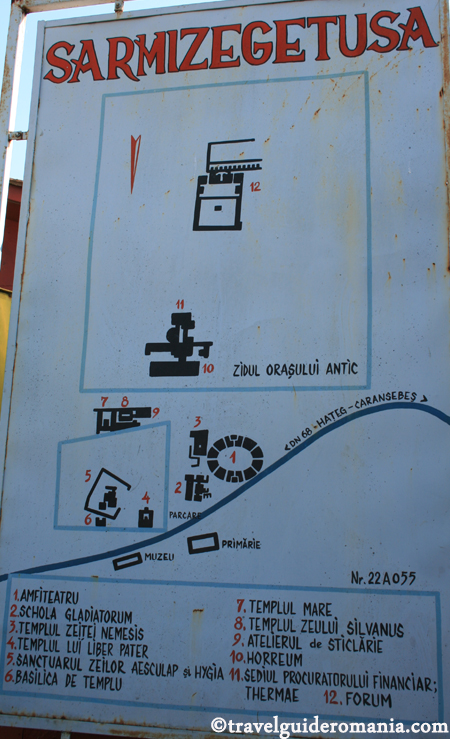 You can find accommodation at the local’s guesthouses and the fee is somewhere around 70 and 100 Lei per night.

For those of you who’d rather spend the night amidst nature, we recommend you to take the county road 685 crossed by the national road DN 68 which leads to the Retezat National Park– a very important and unique sight!

Sarmizegetusa Ulpia Traiana, the only town from Dacia formed by colonization, develops itself from a veteran town (post Dacian-Roman wars) into a civil one, without garrison.

The city was built within the spacious precincts of a wall that hosted 15 000 – 20 000 inhabitants on a 32 hectares surface. The wall was made of square stones and is estimated to have had a 1.8 m thickness and 4-5 m height. 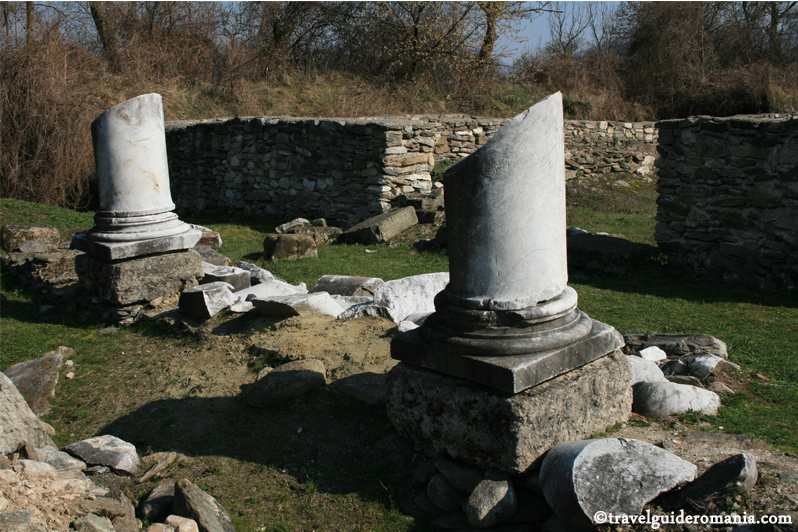 As it was the habit back then, the same town-planning was applied to Sarmizegetusa as for the other Roman cities (civitas): a rectangular plan, with a main road on the N-S direction (carto maximus) and another one on the E-W direction (decumanus maximus).

The entrance was possible through a monumental gate located on the North side. 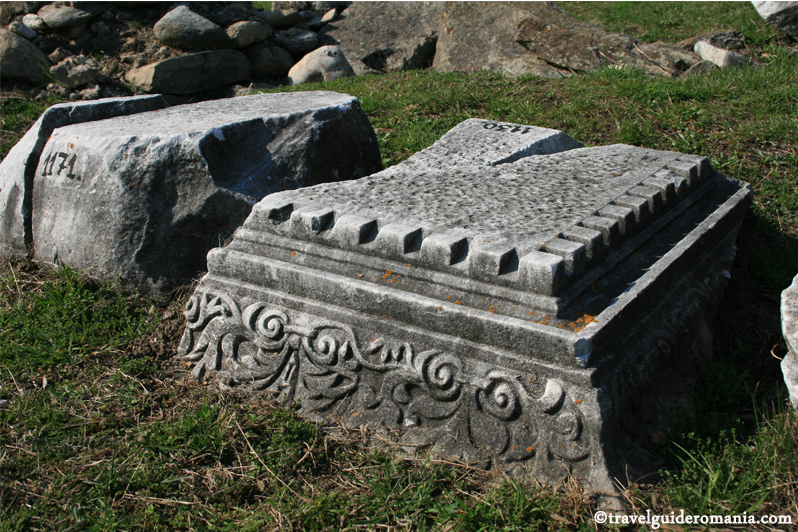 In the precincts of the fortress, the archeological excavations revealed:

A public open space reserved primarily for the vending goods, then for political discussions and debates, rendezvous, meetings etc. It has a quadrilateral shape with sides of 42 m and surrounded by a wall. Along the North and East walls an open market was set and several entrances on the North wall were enabling the access into the forum. 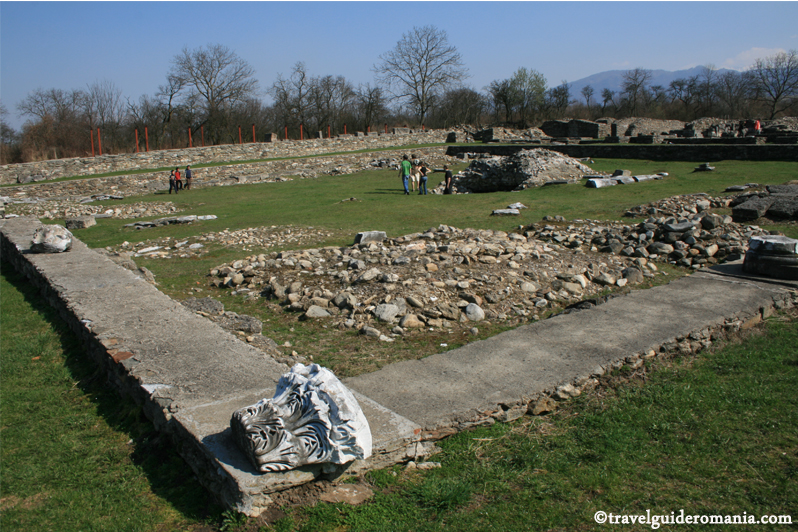 A religious monument, decorated with pilasters (slightly projecting columns built into or applied to the surface of a wall) with Ionic capitals. 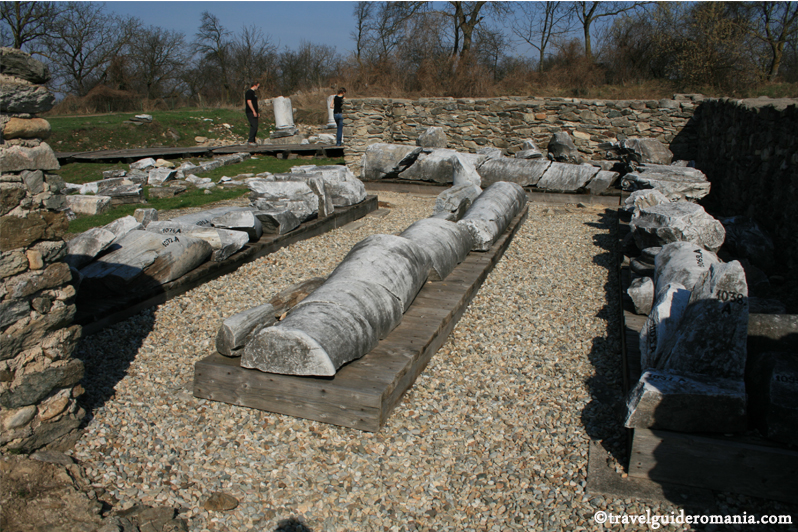 An ellipsoidal construction with a capacity of 5 000 spectators, designed for great shows, fights between gladiators and/or animals. The arena was located in the middle, surrounded by rostrums (platforms on which public speakers stand to address the audience). 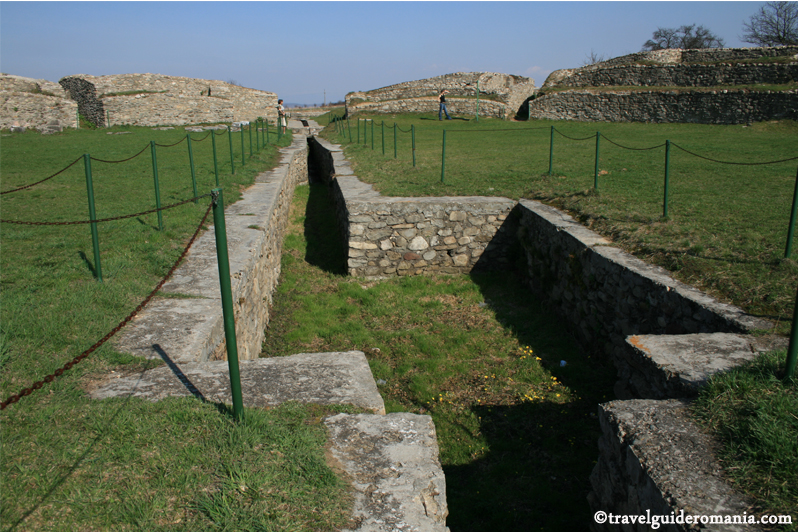 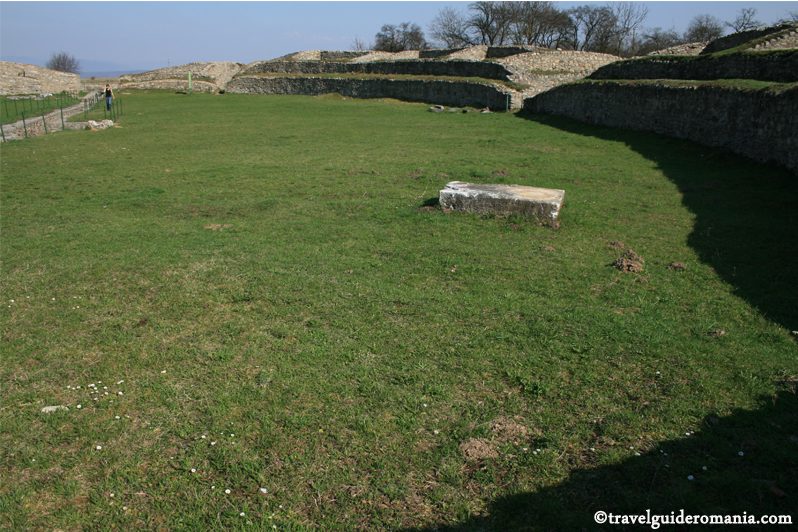 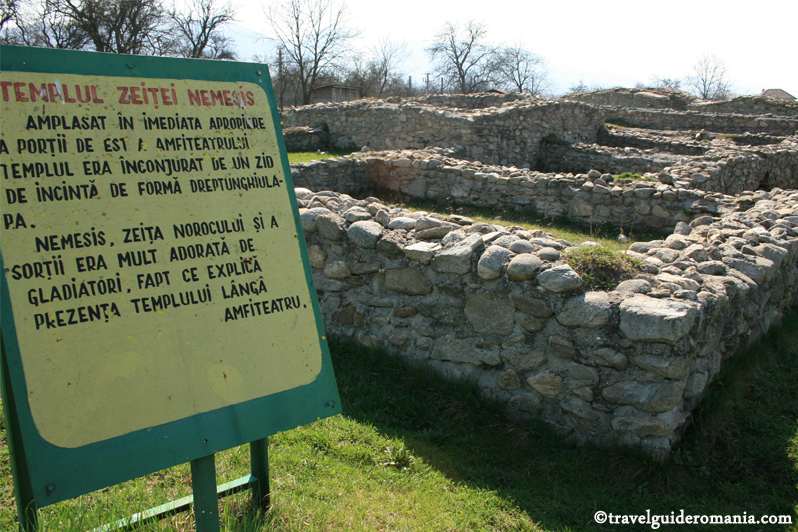 Other interesting things to see inside the site: the Great Temple, Silvanus God Temple, the Liber Pater Temple (The Free Father – god of viticulture and wine, fertility and freedom.

He was a patron deity of Rome’s plebeians and his festival of Liberalia, March 17th, became associated with free speech and the rights attached to coming of age), Horreum (a public warehouse used to store grains, olive oil, wine, foodstuffs, clothing and even marble), glassware ateliers etc.

Other touristic objectives that are worth visiting in the area, besides the National Park Retezat: