The Berca Mud Volcanoes stand for one of the most interesting mixed reservations (geological and botanical) in Romania. It has been protected since 1924. Due to landslides, deforestation, downpours, and mudflows, there is an eerie and lunar atmosphere in the reservation.

Besides the mud volcanoes, which make up the main attraction of the reservation, there are also rare plants. 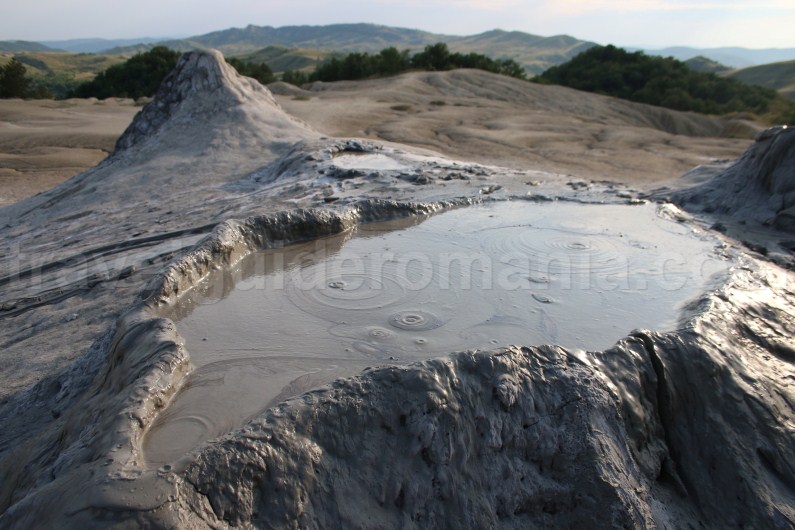 The term “mud volcano” pertains to the scientific field and defines a slow or sudden mud eruption followed by gas emissions or even petroleum releases. 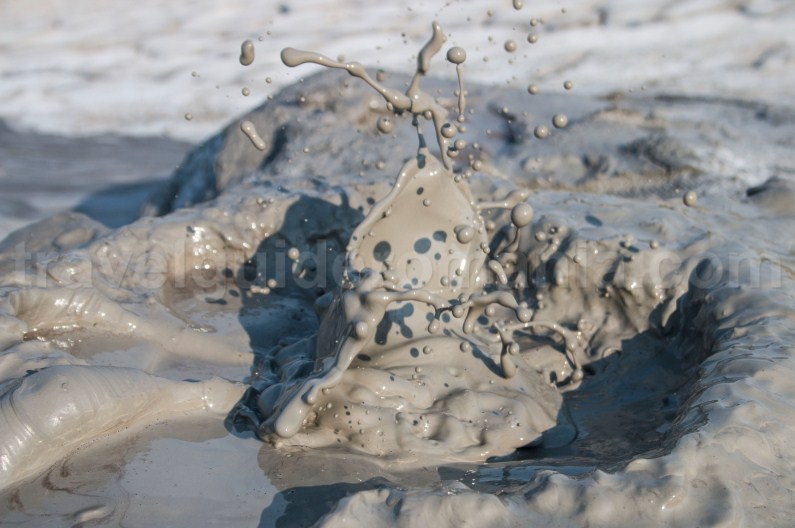 Mud volcanoes were first noticed in our country near Berca Locality by H. Cognard, a Frenchman, in 1867, in his attempt to find petroleum. Almost a quarter of the mud volcanoes in the world are linked to the Alpine-Carpathian-Himalayan Mountain Chain, starting from Italy, then Romania, Black Sea, Azerbaijan, and Pakistan. 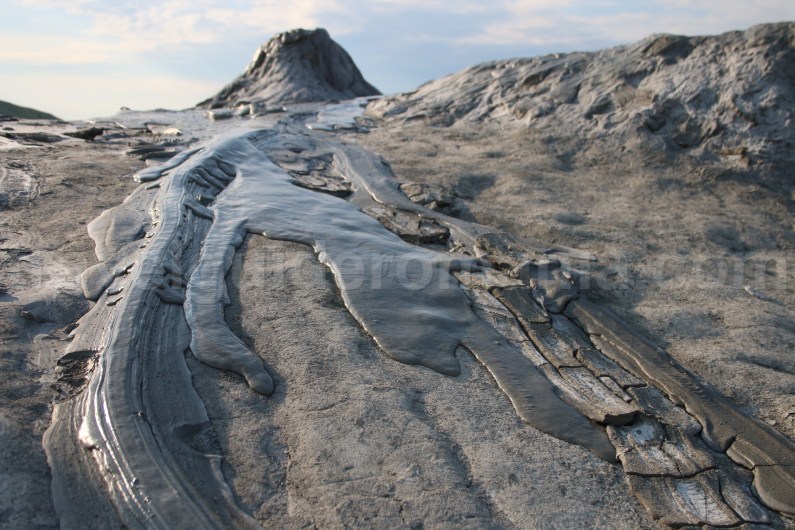 Placed in the Berca Depression (Buzau County) in the Sub Carpathians of Curvature, the site is of utmost importance for the community, Natura 2000 – ROSCI0272. The Berca Mud Volcanoes represent one of the most interesting natural reservations in Europe. The 60-acre area is protected by law. 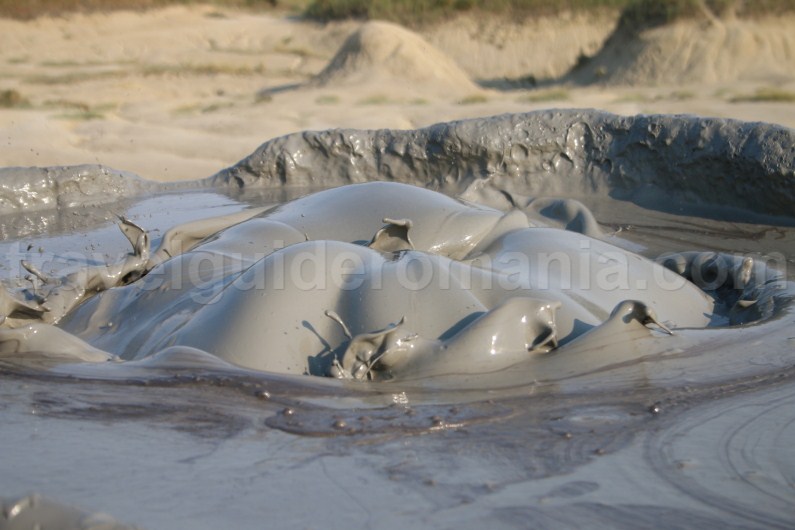 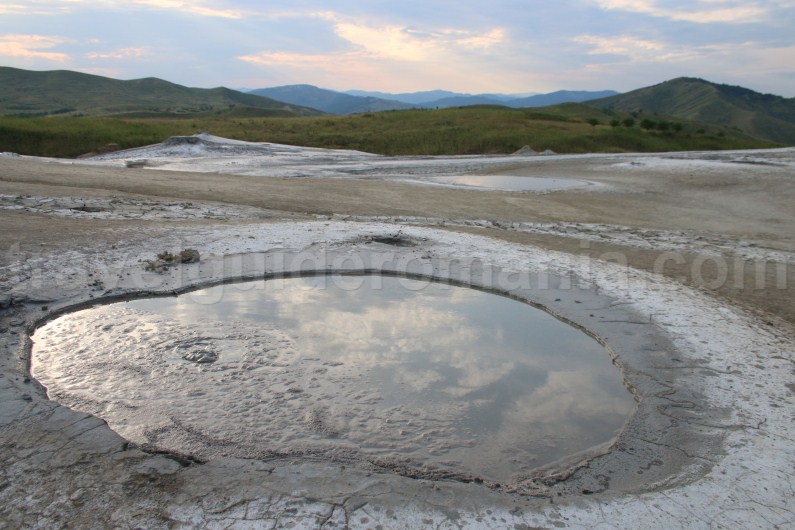 The mud volcanoes from the Buzau Sub Carpathians are formed due to the underground eruptions of gases generated by oilfields hundreds of metres deep. The gas released by the black oil magma penetrates through crevices and fissures, adding up variable amounts of mud and water. 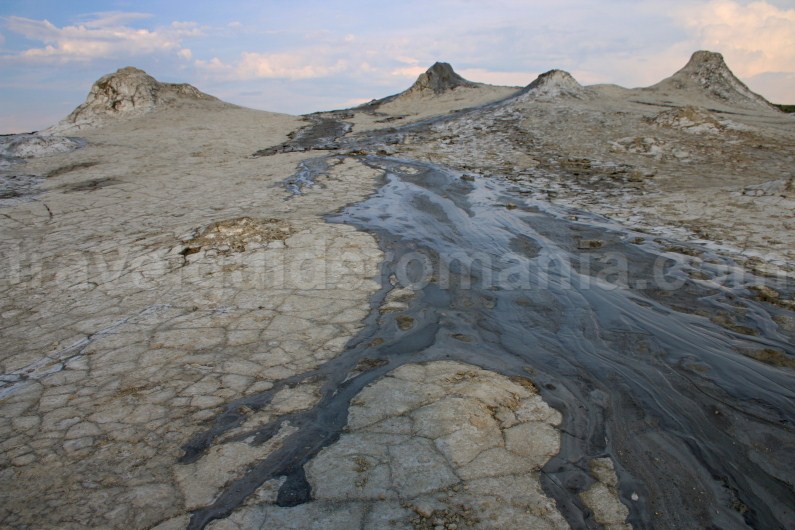 The craters are up to 6 m high with permanent or intermittent eruptions, whose intensity depend on the water that infiltrates the soil. Around the volcanoes there is salt efflorescence formed as a crust and there is no vegetation. 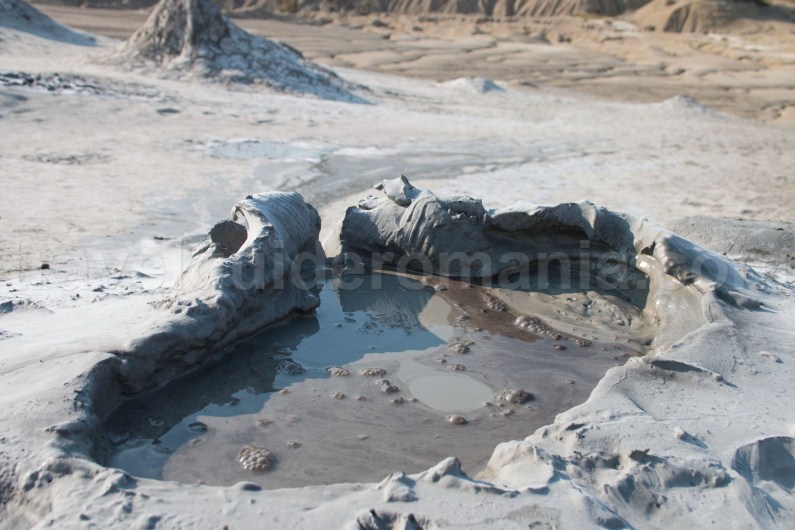 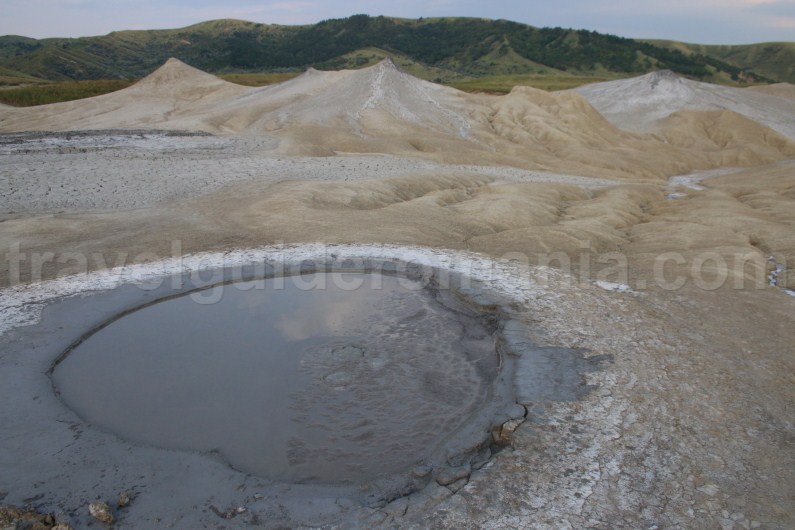 Access is made via DN 10 (Buzau – Brasov) until km 18, then DP Satuc-Berca- Joseni- Policiori until km 8, and DC Polciori – Pacle until km 5, plus 3 km to the left for the Little Mud Volcanoes and 1 km ahead for Big Mud Volcanoes. 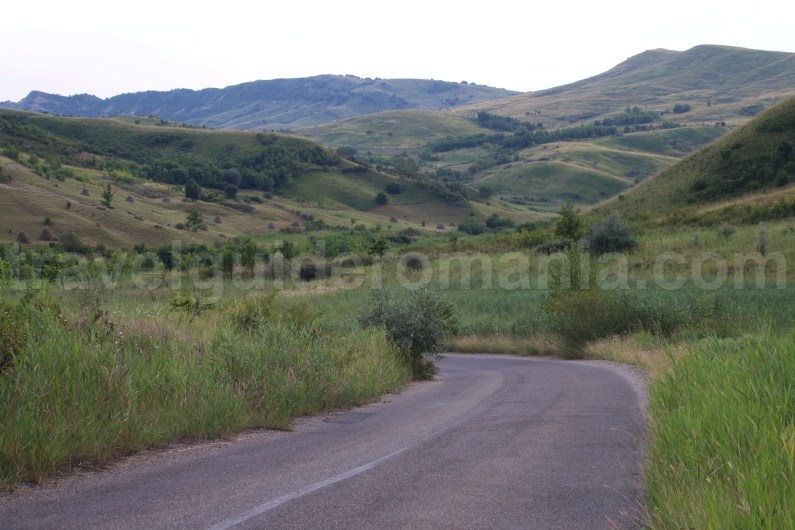 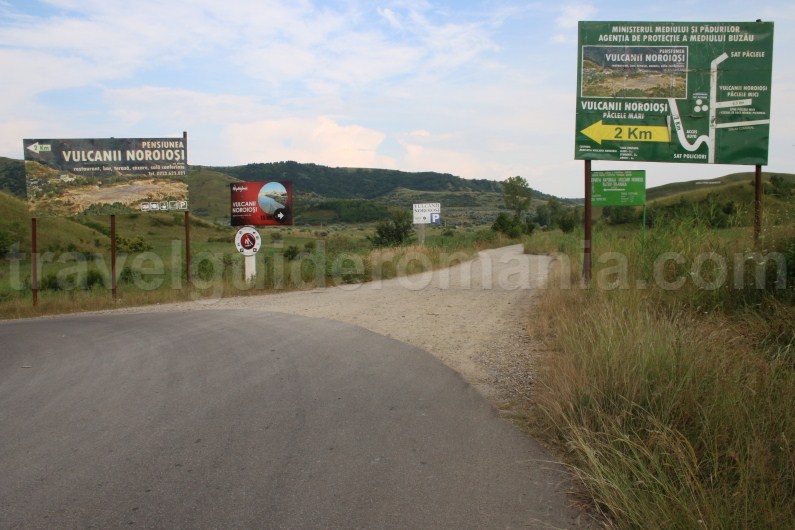 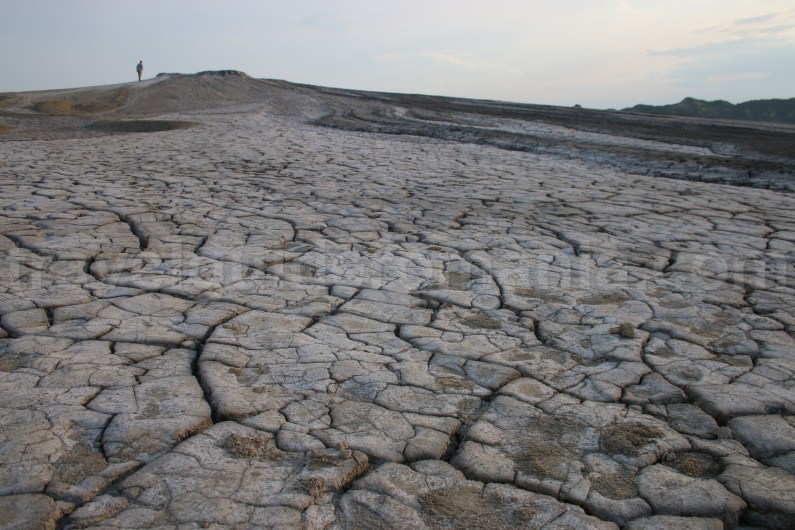 Accommodation options: there is a guesthouse near the Big Mud Volcanoes. There are many plots, and with the permission of the landowner, you can camp there.

Parking lot: you can park near the entrance of the Big Mud Volcanoes reservation. There is no parking fee. 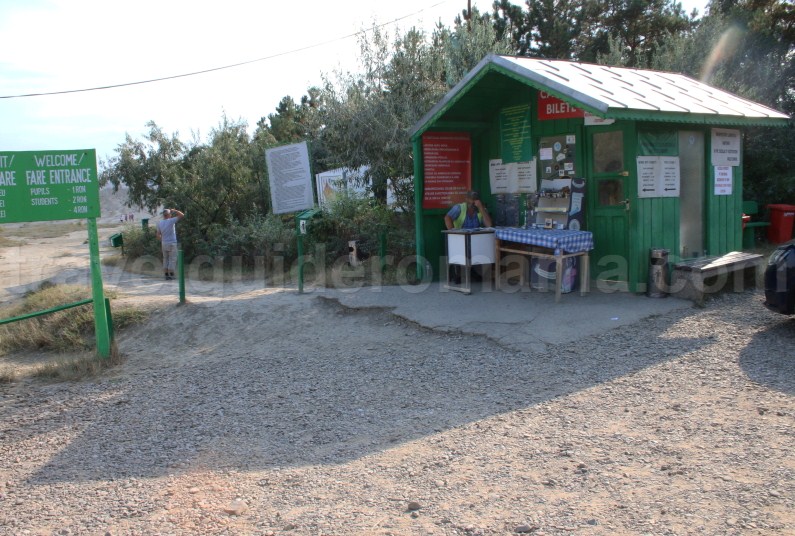 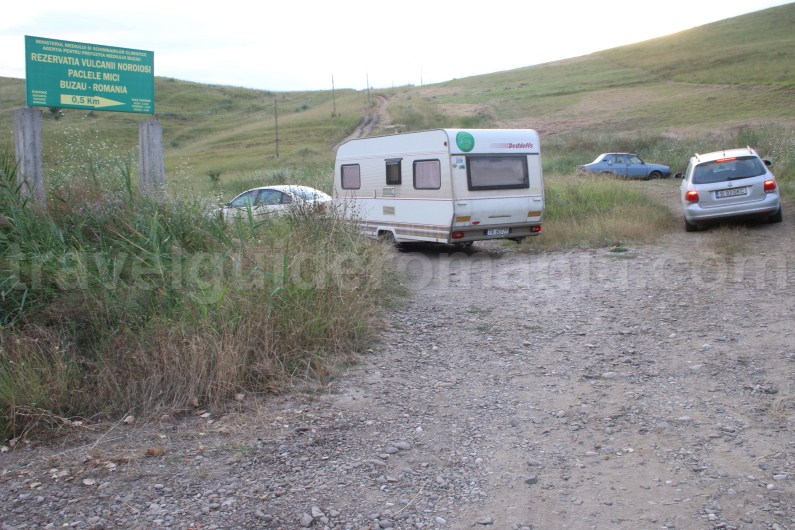 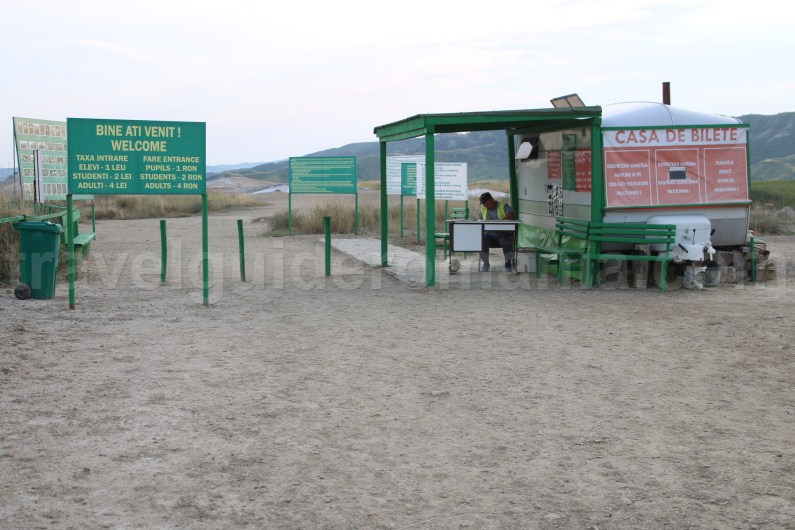 During your visit to the two reservations, you will have to follow certain rules:

– you mustn’t enter with your pets

– you mustn’t smoke nor eat during your visit 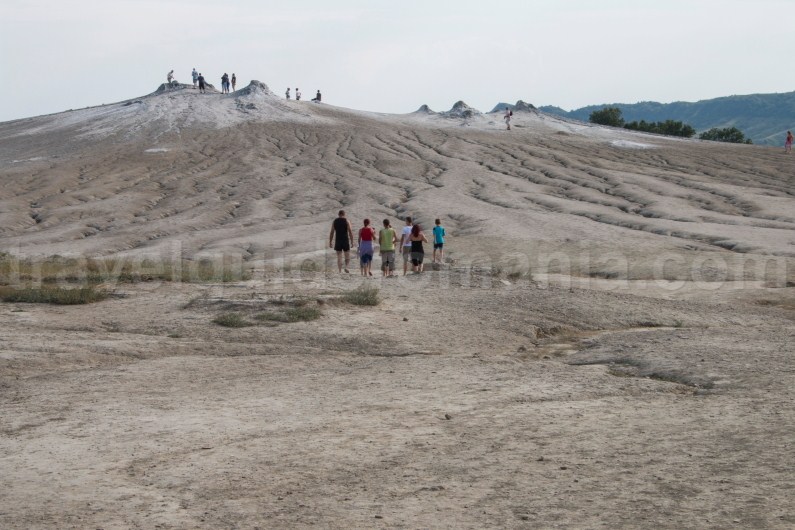 At Big Mud Volcanoes Reservation, the volcanoes are found at 322 m altitude.  It’s a circular plateau made of the deposits of the eruptions of the numerous active volcanoes or conical fossils that are of variable sizes. The active cones are not higher than 3 m, whereas the fossil ones reach even 8 m.

On top of the liquid mud, the hydrocarbon foam floats. The foam forms when the gases penetrate the soil. The chemical analysis shows that the water comes from rainfall, and not from the underground deposits.

The shape, height and width of the cones depend on the viscosity of the mud and on the terrain shape. Seismic movements may increase volcano activity, which has proven to happen, just like it did in 1977. 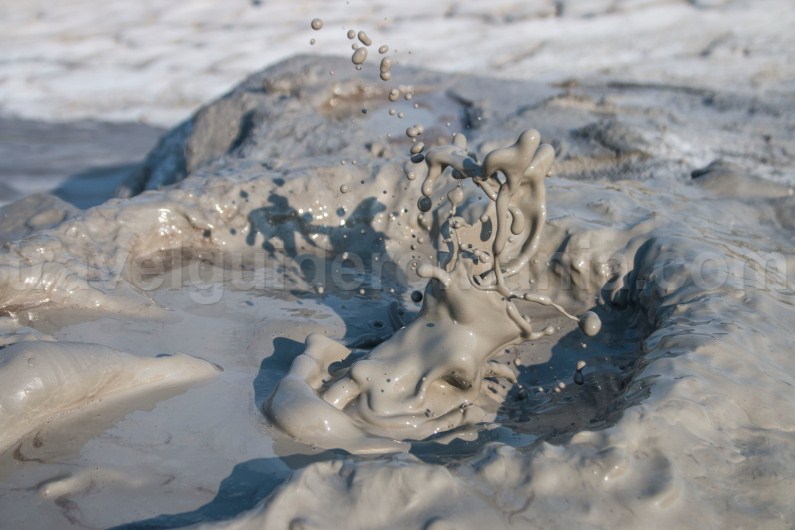 The name of Big Mud Volcanoes Plateau is linked to the great sizes of the three main volcanoes situated in the centre of the plateau. This plateau is also considered as a natural protected reservation and spread over 20 acres. 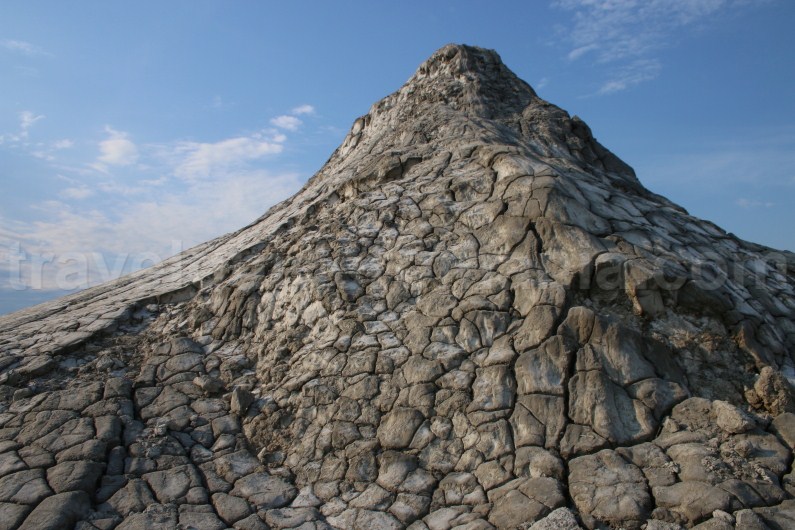 The main difference between the two reservations is that Little Mud Volcanoes has many small volcanic cones up to 0.3-4 m high, steep slopes, and visible craters exuding almost constantly (very) soft mud, that it flows even in streams. Sometimes, there is even water flowing. They are somehow “active” and “fresh”. 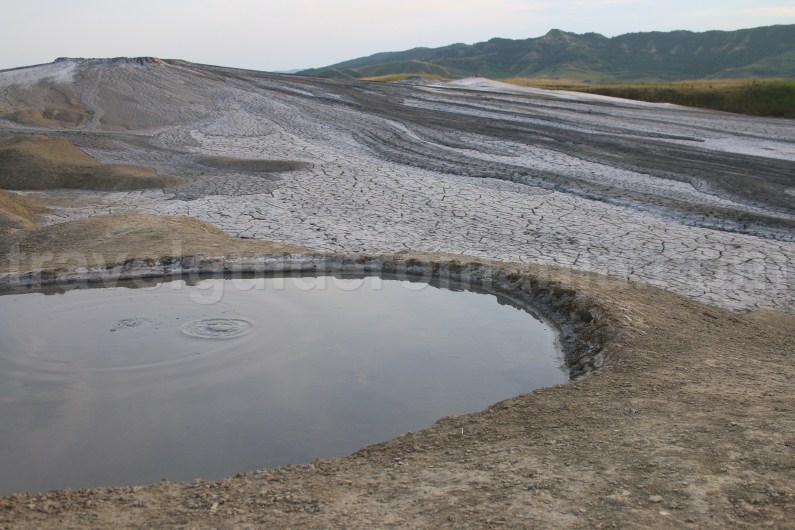 You will find at Big Mud Volcanoes fewer volcanoes, but vaster and lower slopes. The exuded material is heavier and sporadic. The volcanoes seem “dry” or “latent”. 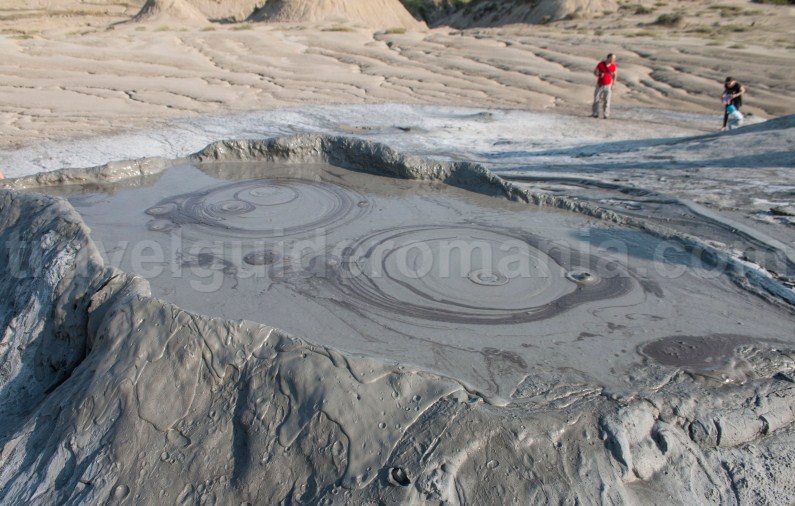 At Little Mud Volcanoes Reservation, the mud volcanoes are found at 341 m and from the research that was conducted has shown that the magma chamber is 3000 m deep. There are no fossil cones. The lack of vegetation on the plateaus and the various shapes molded by the liquid mud and also by erosion seem like the barren, lunar terrains. 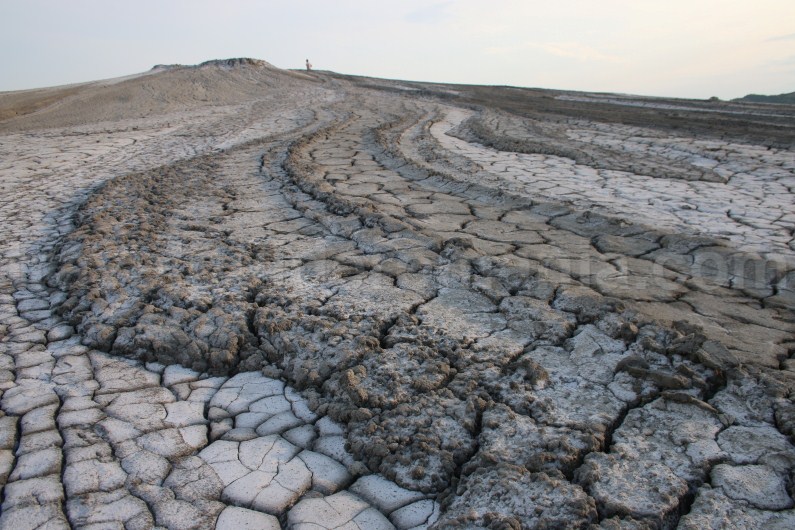 Little Mud Volcanoes Plateau is a natural reservation spreading over 10 acres. It’s protecting the natural landscape and the two halophile plant species (organisms which grow in salty environments) – Nitraria Schöberi and Obione Verrucifera – on the western border of their vegetation area. Nitraria Schöberi hails from Asia, and is only found at Berca in Romania. 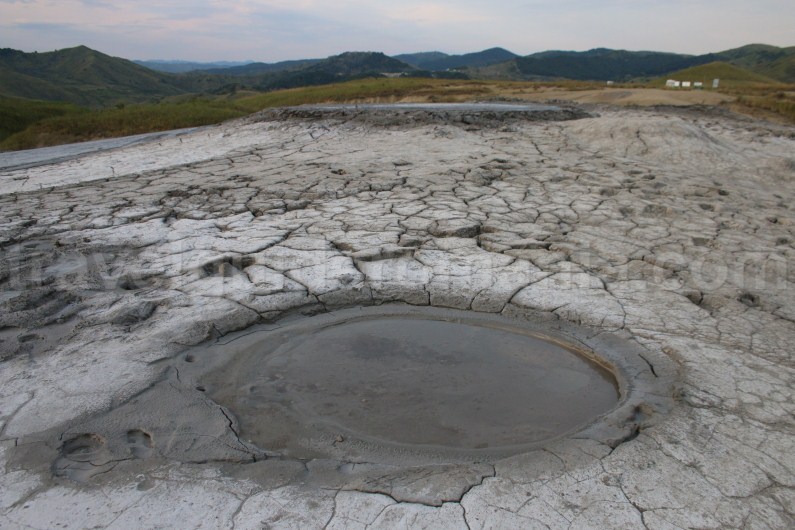 For more tourist information about Buzau County and its surroundings, please stop by the info-point in Berca Locality.